By Joan Hart on November 8, 2011 in Art Happenings

Note:  Please click on each image to highlight the individual work of art.

It may not be 2012 yet, but the political pundits are already speculating who will be the next president of the United States.   However, whoever the next American leader might be, he or she can enjoy an impressive art collection that even a busy chief executive will surely take time to appreciate.  How could anyone resist a Monet?  Or a Mary Cassatt?  And a Georgia O’Keeffe?

In fact, the oldest occupant of the White House is a painting.  For when then First Lady Dolley Madison, wife of fourth president James Madison, was forced to flee the approaching British army during the War of 1812, she rescued only Gilbert Stuart’s portrait of George Washington that had been hanging in the mansion since 1800.    A considerable feat by the rushed presidential spouse, who is said to have enlisted the aid of two passersby to remove the huge canvas to a nearby wagon.

Today thanks to Dolley Madison the symbolic “father of the country” presides over a multitude of White House functions in the spacious East Room, ranging from press conferences to rock concerts. 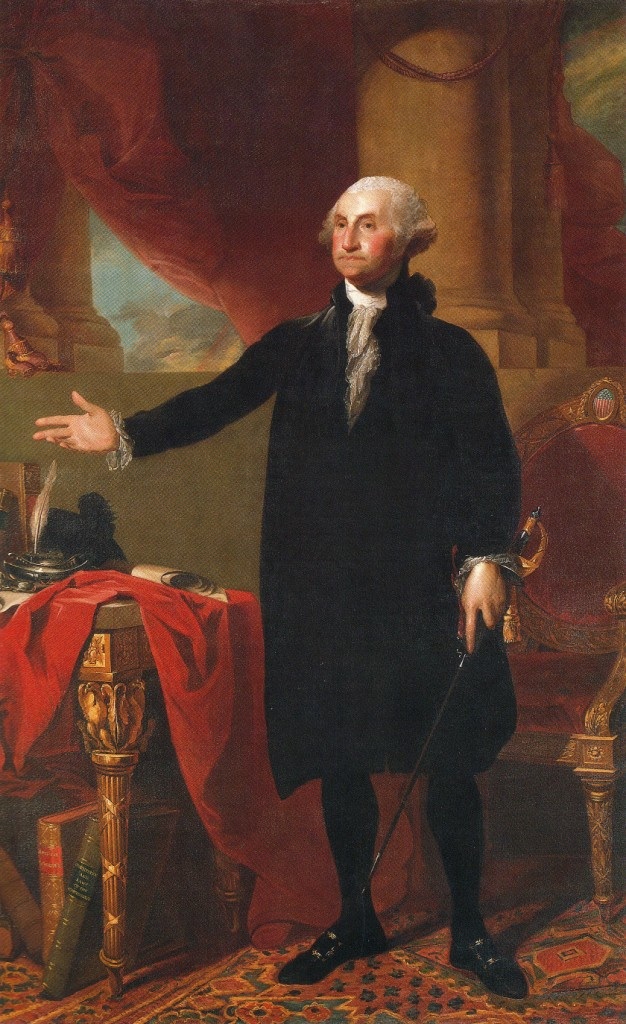 Perhaps Madison, one of the White House’s most successful hostesses, was also rather partial to Stuart, who had previously captured her warmth and charm in an 1804 portrait done when her husband was Secretary of State.

Although, can she rival the beauty of President Martin Van Buren’s daughter-in-law, Angelica Singleton Van Buren, immortalized by Henry Inman in 1842? Dolley Madison, then a widow, lived just across the street from the White House  and introduced the lovely Miss Singleton to the president’s son Abraham.

The two friends now both grace the elegant interior of the Red Room.  Would the former First Lady be just a bit envious of the younger woman’s more prominent place over the fireplace? 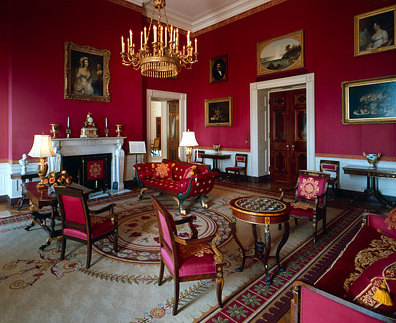 However, a more somber and reflective Abraham Lincoln by George Healy has been watching over official dinners in the State Dining Room for decades. 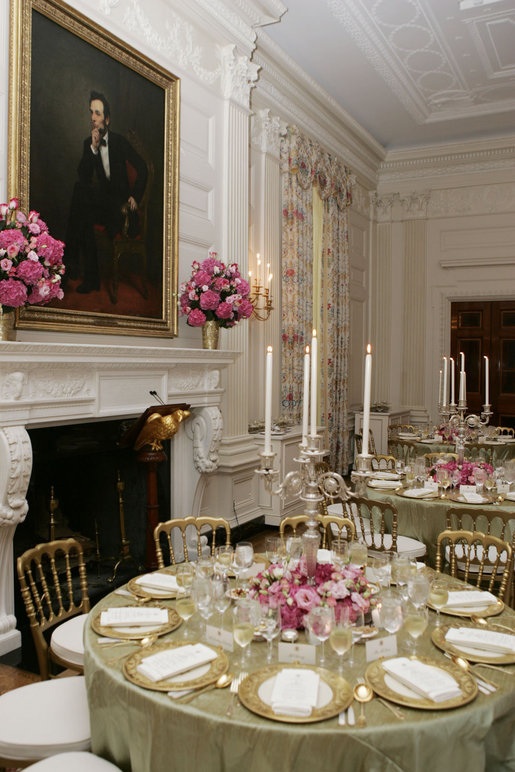 For what guests could avoid Lincoln’s awesome presence hovering above them.  George Healy, a popular presidential portraitist of the nineteenth century, based his posthumous depiction of Lincoln on his earlier work The Peacemakers (also in the White House), inspired by an event just before the president’s assassination at the end of the Civil War.

In 1963,  in the aftermath of another presidential assassination, the Kennedys donated Monet’s Morning on the Seine, Good Weather, in memory of the 46 year old President John F. Kennedy who had been tragically shot in Dallas, Texas.  Presently, the public does not have access to  this contemplative masterpiece that soothes the viewer with its lavender like color and tranquil light.

Instead Morning on the Seine, Good Weather  is upstairs in the West Sitting Hall, part of the  privates quarters of the First Family, where it has hung for several years.

Claude Monet, Morning on the Seine, Good Weather (on our right, on the wall next to the window) , West Sitting Room, White House

While in the nearby area called The Center Hall, a late Mary Cassatt, A Young Mother with her Two Children, has probably intrigued numerous presidential children and grandchildren with its lifelike realism.

Though back downstairs, in the Green Room, the work of another American woman artist is displayed.  Mountain at Bear Lake–Taos by Georgia O’Keeffe was only shown once in 1931 before its acquisition in 1997 under the Clinton Administration.

Do you think O’Keeffe’s stark interpretation of the Southwest landscape stands out in the mainly nineteenth decor of the Green Room?  Or do you have a different opinion? (Note: the photo below is from the Clinton Administration. The painting seems to have been moved according to photos of the Green Room taken from 2005 on. )

Finally, what works of art does the President view everyday in the Oval Office as he concentrates on the daily business of the country.  Look closely and you’ll see the  red, white, and blue hues of The Avenue in the Rain by Childe Hassam on the wall to President Obama’s right.

Hassam, often considered an American Impressionist, created an incredible series of  some thirty views of Fifth Avenue draped in the stars and stripes (as well as fellow Allies’ flags), expressing the patriotic zeal of the United States during World War I.

Norman Rockwell’s Working on the Statue of Liberty faces President Obama on the other side.  Rockwell, most famous for his Saturday Evening Post covers, painted a number of  chief executives during his long career, from Franklin D. Roosevelt to Richard M. Nixon. 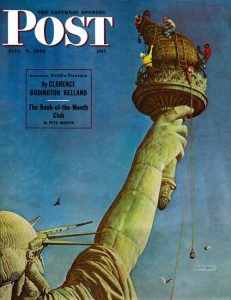 All of the above paintings are utilized solely for educational purposes.

Discover more about Georgia O’Keeffe and other artists in Through an Artist’s Eyes: Learning to Live Creatively.

And a great gift for the upcoming holidays!