Imagine a woman with the mystery of a Da Vinci and the grace of a Botticelli? Or the flirtatiousness of a Fragonard as well as the charm? Could you be dreaming of a Vermeer?  Masterpieces of femininity that dominate his existing 34 or 35 works (depending on who is counting). Challenging art experts into the 21st century, as if compelling them to analyze and dissect each of Vermeer’s female creations.  Would you like to try too, beginning with a mini-gallery of three paintings Monday and another trio Wednesday? I’ve provided some theories of art historians selected from leading art books and website on Vermeer (1632-1675) so that you can make your own decisions.

She’s intoxicated, but not with life.  A glass of wine the culprit in A Maid Asleep, nearly invisible, blending into the intricate patterns of  the table covering. How long has she been in her stupor, oblivious to the time?  A minute, an hour, an entire afternoon? Will she awaken before she is discovered?

The Breakthrough: Probably Vermeer’s first genre painting for which he would become famed; previous works were mainly religious and mythological subjects. But she like her counterparts in Soldier and a Laughing Girl and Woman and Two Men (also early productions) is still rather earthy compared to Vermeer’s later, more virtuous ideals.

Overdressed Maid or a Housewife? She’s been identified as either a servant or mistress of the household. Because of the quality of her clothing, some art historians have assumed she belongs to the middle or upper classes.  However, apparently at that time maids were known to enjoy wearing fine attire including earrings.  Do you see the black patch near her eye (said to be a means of soothing or preventing toothaches)?

The Case of the Missing Companion: X-ray examination indicates a man once stood stood in the back room; a dog too was located in the doorway.  Also look closely for what has been described as an overturned glass next to the white jug, maybe a walking stick nearby, and the chair at an angle, as if someone had just left.

A Warning? Was Vermeer demonstrating the likely result of imprudent behavior? The evils of drunkenness as well as infidelity? Or sloth and laziness, a vice in 17th century Holland?

Love and Depression: Is she actually suffering from unrequited love?  Above her hangs a depiction of Cupid (not evident in this image), a symbol of l’amour.  Or she might be experiencing what was termed then as melancholia or, according to today’s clinical assessment, depression. 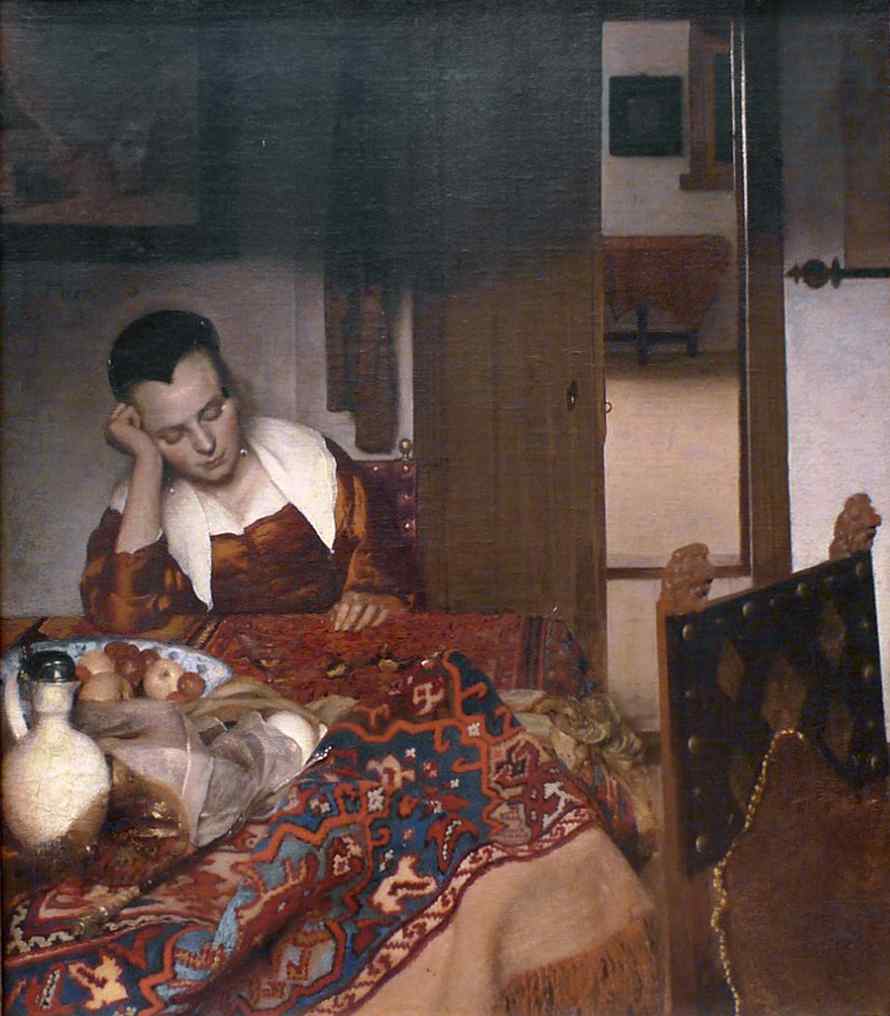 A CLASSIC BY THE MASTER OF DELFT

In Woman in Blue Reading a Letter, love requires patience, constant waiting for just a piece of paper. The messenger of her future happiness, held firmly in her hands. Studying every word intensely, searching for the promise of her faraway husband or lover to return soon from his travels.

An Expectant Mother?  Is she pregnant? A obvious concern for both scholars as well as the average viewer. Yet, no conclusion has been reached. The subject might be—or then again she could simply be wearing the latest fashion, her ample morning jacket reflecting the current style. Another possibility is that  she is Vermeer’s wife, Catharina Bolnes, who bore him 15 children (4 died in infancy or childhood), except none of Vermeer’s models has been identified.

Before Facebook: Letters were the major form of communication, critical in matters of romance and other social interaction. However, two out of three Dutch women reportedly could not write.

A Lesson in Geography?  Maps of the Netherlands can be found in in backgrounds of five Vermeers. Was their purpose merely decorative? Or could they symbolize the pride of the Dutch in their country, which had been once been ruled by Spain? Perhaps too a sign of affluence as well as an interest in the new science of cartography.

The Almost Perfect Composition: This work is often admired for the way Vermeer has organized the space, placing the reader in the center. Note how she is framed on both sides by the matching chairs (that appear repeatedly in his paintings); the blue pole extending from the base of the map also directs our eye toward her. Of course, the light highlights her form, although where’s her contrasting shadow on the wall? 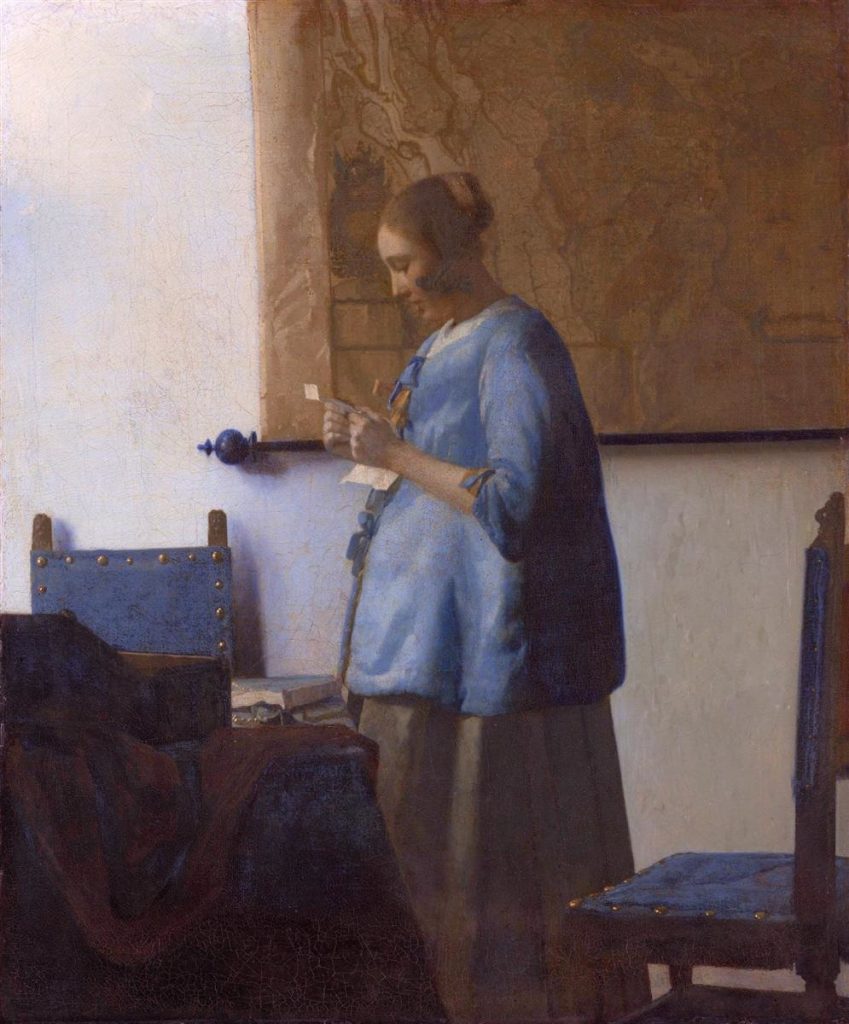 NOT THE USUAL VERMEER

Isn’t talking forbidden in a Vermeer, where barely a sound should be heard?  So then why in Mistress and Maid is the latter allowed to speak? While her mistress seems puzzled at the unexpected envelope, likely from a secret lover. For she has only started to respond to his previous communique. Does she fear a sudden threat to their affair?

A Dramatic Request? These two figures are larger in dimension and more animated  than in most Vermeers.  Was he trying to please one of his clients who might have preferred a livelier approach, encouraging a bit of conversation and increased drama?

A Dutch Downton Abbey: They may not be of the same class, but employer and employee are drawn together by what could be an emergency.  Perhaps even conspiring to protect the mistress’ honor, reminiscent of some of Lady Mary’s predicaments in Downton Abbey. Or does a crisis truly exist?

The Rich Patron: The attributes of wealth are clearly apparent in this work, including the pearls and the fur trimmed jacket (though it might not be actually ermine). Notice also the silver ink pot and accompanying container filled with sand used as a blotter plus the jewelry box. Did they actually belong to Pieter Claesz van Ruijven, generally recognized as Vermeer’s major patron?

Is it Finished? According to the Frick Collection, which owns the painting, the background has not been completed and there is a “lack of fine modeling” in her head and figure. However, her beauty has been praised too by other experts, particularly evident in the naturalness of her skin tones.

A Harmony of Colors: Vermeer displays his genius as a colorist in the unforgettable combination of blue and yellow (which reoccurs in a number of his works), the rich browns, and the emphatic use of white especially in the letter. 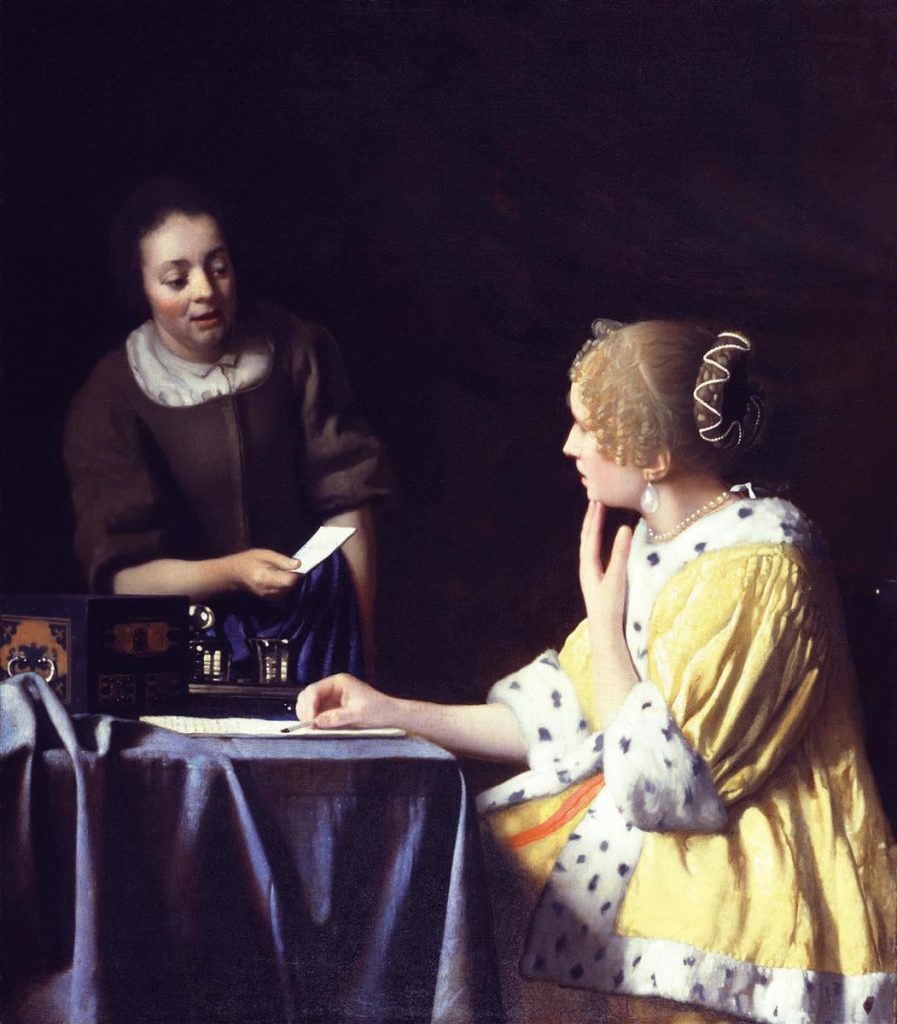 NEXT: DECIPHERING VERMEER—HIS ELUSIVE WOMEN, PART II, INCLUDING GIRL WITH A PEARL EARRING!

This sources for this blog include: Vermeer: The Complete Paintings by Norbert Schneider, Barnes & Noble Books, New York, 2004; Johannes Vermeer (catalog of exhibition) by contributing art historians, National Gallery of Ar, Washington, D.C. and Royal Cabinet of Paintings Maurithuis, The Hague, 1995; and the website Essential Vermeer.