Click on the paintings to ENLARGE and ENHANCE them.

I posted this blog more than 4 years ago, but it seems even more timely now after the terrorist attacks on Paris.

THE HEALING OF A NATION 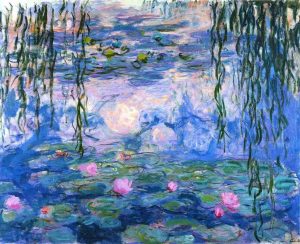 During 1914-1918, the years of World War I, Monet was creating the miraculous water lilies cycle of the L’Orangerie Museum in Paris, that awes so many visitors today.

Except at the time of its creation, Monet’s thoughts were primarily of his contemporaries—the French people. To  help heal, with his monumental work of art, the suffering  that they were enduring during the endless war.  An experience that Monet knew first hand, living close to some of the heaviest fighting between French and German forces (it was said that the guns of the battlefield were so loud, that they could even be heard as far away as England). Almost immediately his stepson Jean Pierre was sent off to the front while one of his stepdaughters, Germaine left Giverny with her children.

In a letter to a friend, Monet wrote:

Most of my family has left…a mad panic has seized all this area…as for me, I’ll stay here all the same…in the midst of my canvases, in front of my life’s work.

And so he did.  Nearly 74 at the beginning of the war, Monet had also known recent losses:  the death of his second wife Alice in 1911 as well of his eldest son Jean in 1914, just months before.  He  had also been diagnosed with a cataract on one eye, although it would not be operated on until 1923.  Still Monet must have lived in constant fear, terrified that he would lose the most critical power of an artist, his sight.

The water lilies cycle was not a new idea.  In 1897, he had already confided to a journalist visiting him at Giverny:

Imagine a circular room in which the walls above the baseboard would be covered with paintings of water, dotted with these plants to the very horizon, walls of transparency by turns toned green and mauve, the still waters calm and silence reflecting the opened blossoms.  The tones are vague, lovingly nuanced, as delicate as a dream.

He also envisioned it as a room of tranquil meditation where one could escape the pressures of the world.

Monet had painted thousands of visions during his preceding career, as he and his fellow Impressionists, Renoir, Degas, Pissarro, Sisley, among others, became the originators of an artistic style considered revolutionary in late nineteenth century France.  The young rebels transformed the art establishment with their canvases of brilliant light, vibrant colors, and dynamic brushwork, immortalizing everyday life.  Their subjects were often of the middle class, enjoying their leisure hours in both urban and rural settings: picnicking, boating, dancing, at a cafe or restaurant, attending the latest theater performance.

Monet, though, dedicated himself to landscape, almost obsessed with capturing the changing atmosphere of the natural world around him, whether the calming riverside of the Seine or the sea along which he had grown up.  He was moved too by the lush green of summer or the frigid white of a snowscape.

For the first decades of his career, Monet really had no home, moving so many times that it is difficult to keep track of all his residences.  Argenteuil and Vetheuil, both near Paris, are the most prominent places among his many addresses where he and first wife Camille settled in rented houses with their two boys, Jean and Michel.  But somehow Monet usually managed to have a beautiful garden.

One spring in 1883, Monet discovered Giverny, where he would cultivate, both in water and paint, the masterpiece of all gardens.  His home, first rented, then later bought, was called the Pressoir, or the house of the cider press, known for its fruit orchards.  By this time, Camille had died and Monet was living with Alice Hoschede plus her six children along with his own sons.

Monet would soon replace many of the trees with a multi-colored flower garden, dominated by irises and tulips in the spring, roses and poppies in the summer. Yet, he barely painted this horticultural paradise; only a few canvases exist of the main pathway, lined with nasturtiums and a mix of vibrant blossoms.

Because Monet was already entranced by his water lily garden, an artistic enterprise that took him several years to construct.  First, he had to purchase the land adjoining his original property, and believe it or not just over the not very aesthetic railroad tracks.  Next, he had to battle the town fathers of Giverny for permission for his pond because they were afraid that he would be diverting water from the rest of the community.  Ultimately, of course, was the challenge of planning and planting hundreds of water lilies, importing them from around world including Europe, Asia, and the Americas.

It was the Japanese bridge spanning the water lily pond that Monet first immortalized, creating some twenty canvases of it in 1899 and 1900, frontally and at an angle; repetitious images that are sometimes difficult to distinguish from each other. 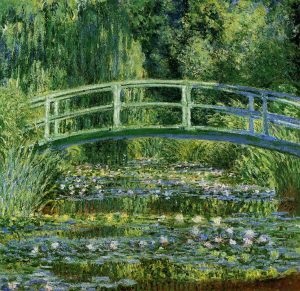 The water lilies themselves, would gradually emerge, here, in a rare close-up. 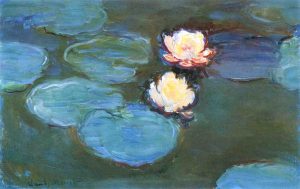 However, in “The Cloud,” the water lilies seem to be competing with the sky for our attention: distant, fragile islands sailing silently by, bounded by the far shore. 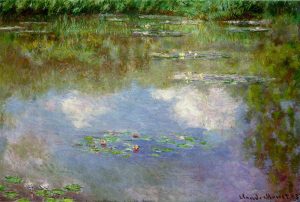 Soon, though, the water lilies confront us, the viewer, no longer confined by borders, floating both away and toward us in a painted dream-like space, without beginning or end. 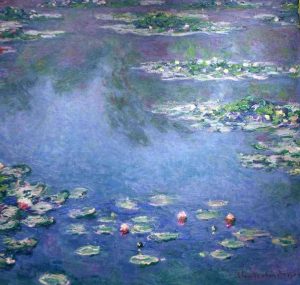 Monet experimented too in depicting his water lilies, employing both vertical and oval shapes.

During the first decade of the 1900s, it is estimated that Monet created some 150 water lilies canvases (although the exact total is not known), culminating in an exhibition of 1909 of nearly 50 that astonished many of his contemporaries, including one critic who compared the display to Michelangelo’s Sistine Chapel.

Then for about five years until 1914, there is a gap in Monet’s production as if he were resting up for the next artistic challenge.  It was also the period when both his wife and son Jean died.  The artist learned too of the cataract that could blind him.  Plus the water lily pond was flooded one winter.  For two months Monet agonized, wondering whether it was ruined forever, but it survived.

However, the slaughter and destruction of World War I did not stop Monet, on the contrary it energized him.  While thousands were wounded or killed, Monet continued to create as if in defiance of forces he could not control.  The beauty of the water lily pond would prevail to restore the spirit of his countrymen after the debacle was over.

Uppermost for Monet were the murals of the Grandes Decorations that would someday encircle the walls of the L’Orangerie Museum in Paris.  Twenty two panels extending over six feet or 200 cm. in height and nearly 14 feet or 425 cm. in width.

Art historians are still not certain of the stages of Monet’s artistic process that led to the final cycle.  For Monet was creating other works of art simultaneously: sizable canvases, often characterized by intense colors and expressive brushstrokes.  Were they completed works of art or actually studies for the Grandes Decorations?

Whatever the answer, photographs taken in 1917 do document the progress of the Grandes Decorations.  Besides the water lilies, we can see the prevalence of the willow tree in the murals. 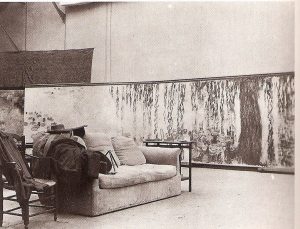 In fact, the weeping willow became the symbol of the war for Monet.  Around the time of one of the most critical episodes of fighting in 1918, when it seemed likely that Germany would invade France possibly overrunning the artist’s beloved Giverny, Monet focused on the tree that graced the shoreline of his pond.

The Allies won, though, and Monet was able to complete his Grandes Decorations, although not without a struggle.  Urged on by his friend, French President Clemenceau, Monet spent the remaining years of his life pursuing this often elusive goal.  His eyesight was his greatest challenge, threatening to stop him from painting permanently, when he was forced to submit to a cataract operation on his right eye at the age of 83 that took at least a year of recovery.

In a poignant photograph taken after his cataract operation, Monet stands in the middle of his garden, wearing dark glasses to protect his eyes from the sunlight that had illuminated so many of his masterpieces.  How afraid the artist must have been, uncertain whether he would be able see well enough to paint again. 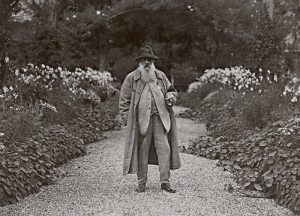 A few years later, Monet would die of pulmonary cancer, but not before he donated his Grandes Decorations to France.

So when you look at Monet’s Grandes Decorations, as well as some of his other later paintings of water lilies, consider both his ordeal and triumph.  Think, too, not of war, but peace—-and how  one man can heal first a nation, then the world. 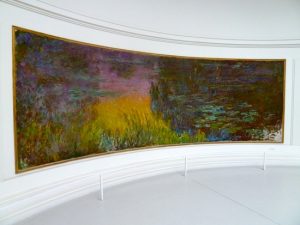 For a more extensive view of the Grandes Decorations, google “water lilies, Musee de l’Orangerie” at youtube and enjoy a number of slide shows taken at the museum.

You can discover more about Monet and how to incorporate his vision into your everyday life in Through an Artist’s Eyes: Learning to Live Creatively by Joan Hart.  Other artists are highlighted in the book, from Vermeer to Georgia O’Keeffe.