Click on the works of art below to ENHANCE them.

However, not that long ago, another work of art by Klimt, Adele Bloch-Bauer I (completed in 1907 around the same time as The Kiss) once dazzled visitors to the gallery. 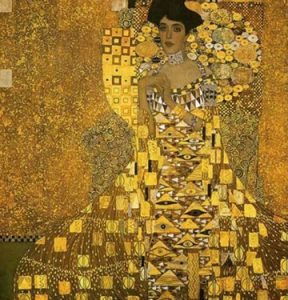 She is a vision in gold, attired like a Byzantine empress holding court. It took Klimt at least three years  to create his resplendent masterpiece, but most likely the subject’s husband, Ferdinand Bloch-Bauer, a wealthy Jewish sugar magnate, was willing to wait. For Klimt was at the peak of his popularity in pre-World War I Vienna, sought after by other elite members of Austrian high society to portray their wives and families.

Yet, could anyone at that time have foreseen that this portrait of Adele Bloch-Bauer would be worth $135 million dollars nearly a century later?

Of course, Adele Bloch-Bauer was no ordinary woman. In her mid twenties when she posed for the portrait, she was a leading hostess and supporter of the arts, Her beauty and charisma obviously inspired Klimt who captured her on canvas not just once, but again in 1912, in a strikingly different interpretation.

It was rumored that Adele was Klimt’s mistress, although unless some hidden love letters are suddenly uncovered between the two, we can only guess at the truth. Or perhaps we can tell her relationship with the artist  by the expression in her eyes? Or is she another Mona Lisa, tantalizing us with her unrevealed emotions and thoughts?

We do know that she had a deformity, apparent by the way she is holding her hand.  An awkward gesture yet necessary to preserve the illusion of perfection. 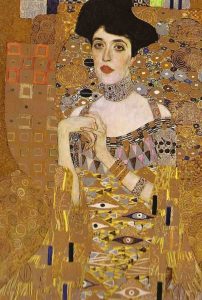 However, around the time Klimt’s portrait of Adele Bloch-Bauer made its debut,  an aspiring art student Adolf Hitler moved to Vienna hoping to enter the Academy of Fine Arts. Hitler was refused entry twice; he remained in the Austrian capital for several years where his hatred of Jews grew, leading to his implementation of the Holocaust during World War II.

Adele, though would not live to see this coming disaster.  For she died of meningitis at the age of 45 in 1925.  In her honor, Ferdinand dedicated a memorial  to her in her former bedroom, where he  displayed her two portraits and other works of art  by Klimt that were  supposed to be donated  to the Austrian National Gallery after his death.  This collection along with the rest of the Bloch-Bauer properties was confiscated by the Nazis after they marched into Vienna in 1938. Adele’s husband and other family members then fled Austria, escaping with their lives but not their fortune.

After the war, Ferdinand, embittered because of his treatment by his own country, wanted the Klimts back.  But the Austrian government insisted that the paintings belonged to them. So for 65 years, the portrait of Adele Bloch-Bauer and the other Klimts remained at the Galerie Belvedere.   Until 2006, when 90 year old  Maria Altmann, a  niece of Adele’s who had moved to California after the war, won ownership rights to the Klimt paintings in a ruling by the U.S. Supreme Court.

Soon after, in June 2006, Ronald S. Lauder, the youngest son of the cosmetics magnate Estee Lauder, purchased Adele Bloch-Bauer I for his Neue Galeire in New York City for a  a reported $135 million.  The other four Klimts (including Adele Bloch-Bauer II) were sold later in the year for $192.7 million to private collections.

Maria Altmann died recently, in early 2011, but perhaps she had at least one more wish.   The recovery of her aunt’s priceless necklace that once encircled Adele’s slender neck in the portrait, last seen in the possession of Hitler’s fellow culprit and master art thief, Hermann Goering.