Click each image to enlarge the individual works of art. 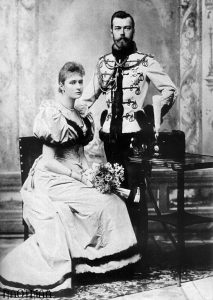 Valentine’s Day is on Thursday and I thought I would reintroduce my blog Faberge’s Easter Eggs—A Gift from the Czar. While researching it, I think I became a bit obsessed with all those priceless Imperial Easter Eggs. Imagine the Czarina Alexandra awaiting another yearly surprise designed by the always inventive Faberge.

Few figures in history have fascinated us like Czar Nicholas II and Czarina Alexandra, particularly their personal lives.  In retrospect, the two monarchs and their five children seemed doomed from the beginning.  While the turmoil of the coming Russian Revolution swirled around them, the family resided in an insular world surrounded by luxury and opulence.  However, the magnificent Imperial Easter Eggs made by the  jeweler Peter Carl Faberge and his workshop of designers, truly symbolize the Romanov’s wealth and power.  Today, these extraordinary treasures are worth millions of dollars, prized by billionaires and art museums as invaluable centerpieces of their collections.

Yet, the Faberge eggs also represent the immortality of love.  Nicholas and Alexandra, in spite of their weaknesses as rulers, had a long and passionate marriage lasting almost a quarter of a century.  Although Alexander III, Nicholas’ father was the first Czar to give a Faberge egg to his spouse at Easter in 1885, the young emperor continued the annual practice when he ascended the throne about a decade later.

In fact, Nicholas would present two Faberge Easter Eggs each year: one to his mother, the Dowager Maria Fedorovna, the other to Alexandra or Sunny as he called her.  His gifts to Sunny, though, reflect the public and private relationship between the royal lovers, ultimately telling the story of their rise and decline.

For instance, the resplendent diamond covered Rosebud Easter Egg of 1895, created just after Alexandra’s marriage to Nicholas, could be interpreted as a sign of the honeymoon stage of their love.  The delicate yellow tea rose surprise inside was likely meant to remind the homesick new wife of the beauty of the flower gardens she had left behind in her native Germany. 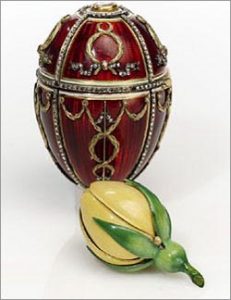 Or the gold Coronation Easter Egg, marking both the crowning of Nicholas II on May 14, 1896 in Moscow and Alexandra’s role as his Empress.  Another surprise awaited:  a miniature replica (with moving wheels and plush upholstery) of the 18th century coach of Catherine II in which Sunny rode to the ceremony that day. 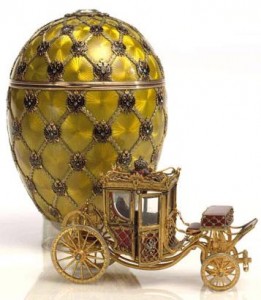 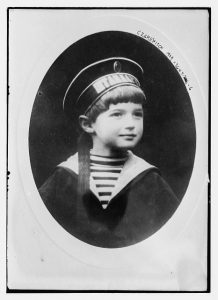 From the elegant Art Nouveau style of the Lilies of the Valley Easter Egg of 1898 that combined Sunny’s enjoyment of flowers with her special love for her baby daughters and husband, 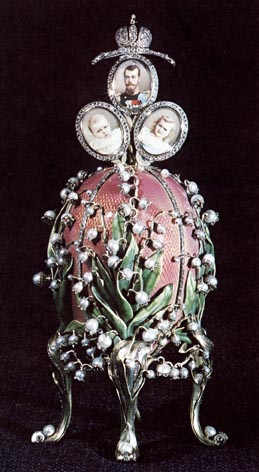 Faberge, Lilies of the Valley, 1898, The Link of Times Foundation, Russia

to the  jade colored Alexander Palace Easter Egg of 1907, where the watercolor portraits of all five children are displayed, while a remarkable model of their favorite residence, the Alexander Palace, is featured as the surprise. 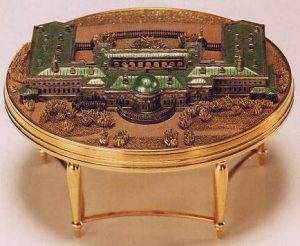 The Standart Yacht Easter Egg of 1909 is another Faberge work of art that would delight Alexandra:  its crystal exterior reveals a tiny version of the Czar’s 4,500 ton yacht in which the family spent two leisurely weeks every June, drifting along the Finnish coast (with a cow who was kept on board just to supply milk for the growing Romanov brood). 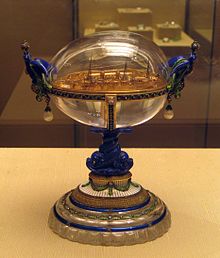 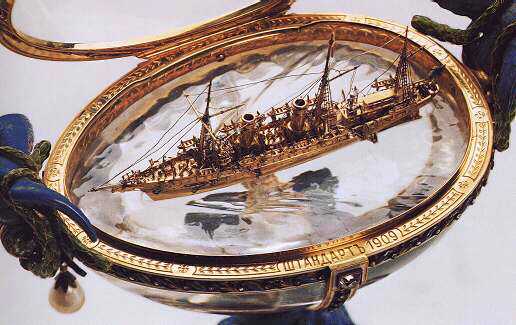 But Empress Alexandra might have viewed the lapis lazuli Czarevich Easter Egg, created to celebrate the recovery of the eight year old Alexei, with mixed feelings: grateful that he had survived near fatal bleeding from hemophilia and yet still haunted by his terrible suffering.  In Alexandra’s eyes, reputed holy man Rasputin was the savior of her son, ultimately leading to the monk’s elevation as her adviser—another factor that would ensure the demise of the Russian empire. 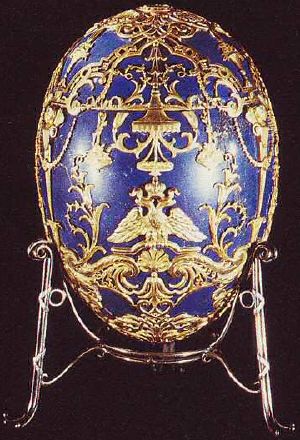 For by 1912, when the Czarevich Easter Egg was finished, Nicholas’ reign had already been weakened by the loss of the Russo-Japanese War and the unsuccessful Revolution of 1905.  World War I, that broke out a few years later, would initially unify the country against its foreign enemies.  Empress Alexandra and the Grand Duchesses Olga and Tatiana joined in the patriotic effort, volunteering to treat the wounded and dying soldiers back from the war front.  Faberge captured their devotion in the Red Cross with Triptych Easter Egg decorated with two portraits of the Empress’ daughters, dressed in the simple attire of nurses.

However, by 1916, the dark and  foreboding Steel Military Easter Egg mounted on four artillery shells, was a portent of the end.  It would be the last Easter egg present from Nicholas to Alexandra; what a contrast to the fragile beauty of the Rosebud Easter Egg of almost twenty years before. 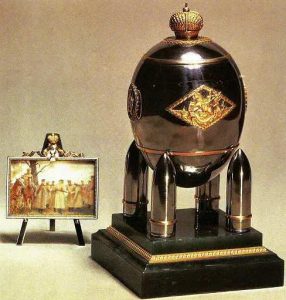 In March, 1917, Nicholas  abdicated.  The Imperial family including the five children would be executed in July, 1918 after a long imprisonment.  Peter Carl Faberge was forced to flee to Switzerland, dying there in 1920, just a few years after the Czar he had served so loyally.

The final Faberge egg, though, is still waiting for the Empress Alexandra.  The Constellation Easter Egg was only discovered in 2001 (although its authenticity is questioned by some experts) and never delivered because of the overthrow of the Imperial dynasty.  It is unfinished, composed primarily of blue glass and supported on a crystal base.  Was it meant to be a another tribute to the teenage Alexei who barely reached adolescence?

All the images featured above are utilized solely for educational purposes.

Google Arts Everyday Living and Faberge eggs for more priceless examples of a emperor’s love for his empress.