130 years ago, Vincent van Gogh’s funeral was held on July 30, 1890, a day after his death.  This blog will focus on  the often powerful works of art he created during his last months at Auvers, France  where he died.  So enjoy this virtual tour of Vincent’s final gift to each one of us.

Click on the following works of art to enhance them.

Well, my own work, I am risking my life for it and my reason has half-foundered owing to it—that’s all right—but you are not among the dealers in men so far as I know, and you can choose your side, I think, acting with true humanity, but what’s the use? (Letter 651) 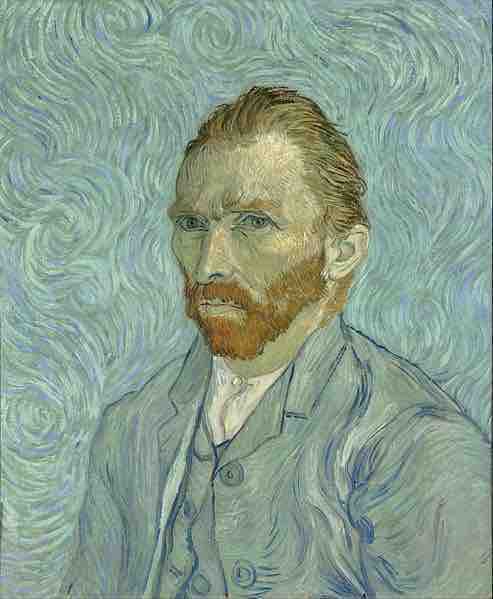 In late July of 1890, Van Gogh wrote these closing words to his brother Theo. The exact date of this letter is not known, but Vincent most likely penned it a few days before he shot himself on July 27.

Why did Vincent commit suicide?  Numerous articles and books have been devoted to finding the reason. Was it his mental illness that had been plaguing him for the past couple of  years?  Or the increasing anxiety that his brother Theo, who ran an art gallery in Paris and was Vincent’s sole source of income, would no longer be able to support him?  Theo was now married and struggling to support his wife and new son.  Or was it Vincent’s discouragement at the lack of recognition of his art by both the public and critics?  Or a combination of all of these factors?

Note: Since I first wrote this article, there is now speculation that Vincent might have been shot by others.

Whatever the cause, Van Gogh continued creating until the end.  His inspiration was the town of Auvers, just  20 miles from Paris where Vincent resided from May 20 until his death in late July.    In a letter  to Theo, written soon after his arrival, Vincent  enthusiastically described the beauty of Auvers’s landscape as well as its appealing houses.

Auvers is very beautiful, among other things a lot of old thatched roofs, which are getting rare….really it is profoundly beautiful, it is the real country, characteristic and picturesque. (Letter 635) 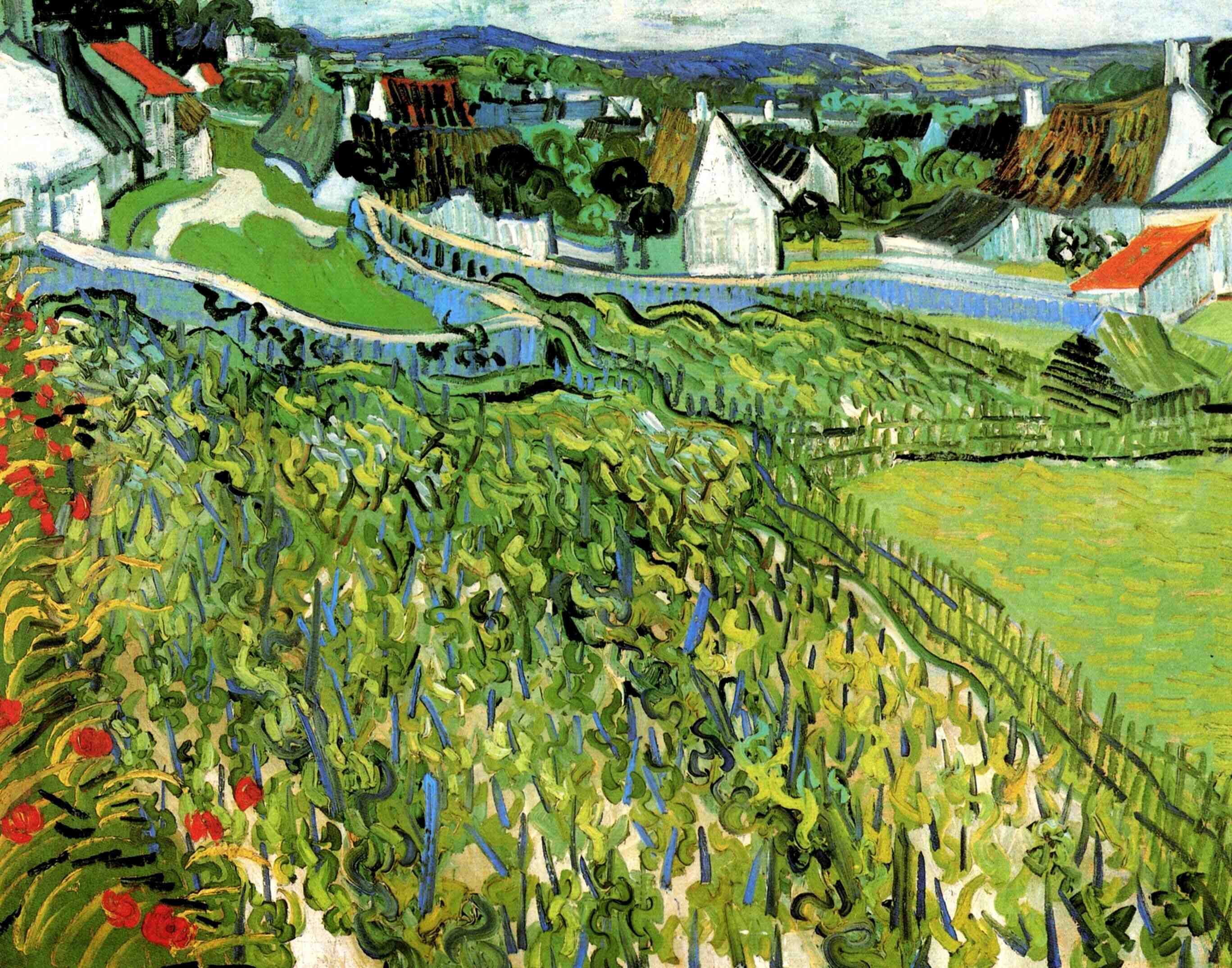 Vincent, though, had only been recently released from the mental asylum of Saint Remy on May 16, and was to be under the care of Dr. Paul-Ferdinand Gachet.  Gachet had had some experience working with mental patients but probably he was just as interested in Van Gogh as an artist. For Gachet was a painter himself and avid collector of the works of Impressionist Camille Pissarro and Paul Cezanne, a pioneer of modern art.     During  the 1880s, Gachet  had been a neighbor of the two artists who had lived and painted in the surrounding countryside.

Van Gogh was friendly with Gachet, yet he confided to Theo in a second letter dated May 23, that the physician is “sicker than I am, I think, or shall we say, just as much.”  Vincent’s reaction  is evident in his two compelling portraits of Gachet, painted with “the heartbroken expression of our time.” *Ironically,  the first version sold for almost $80 million nearly a century later. 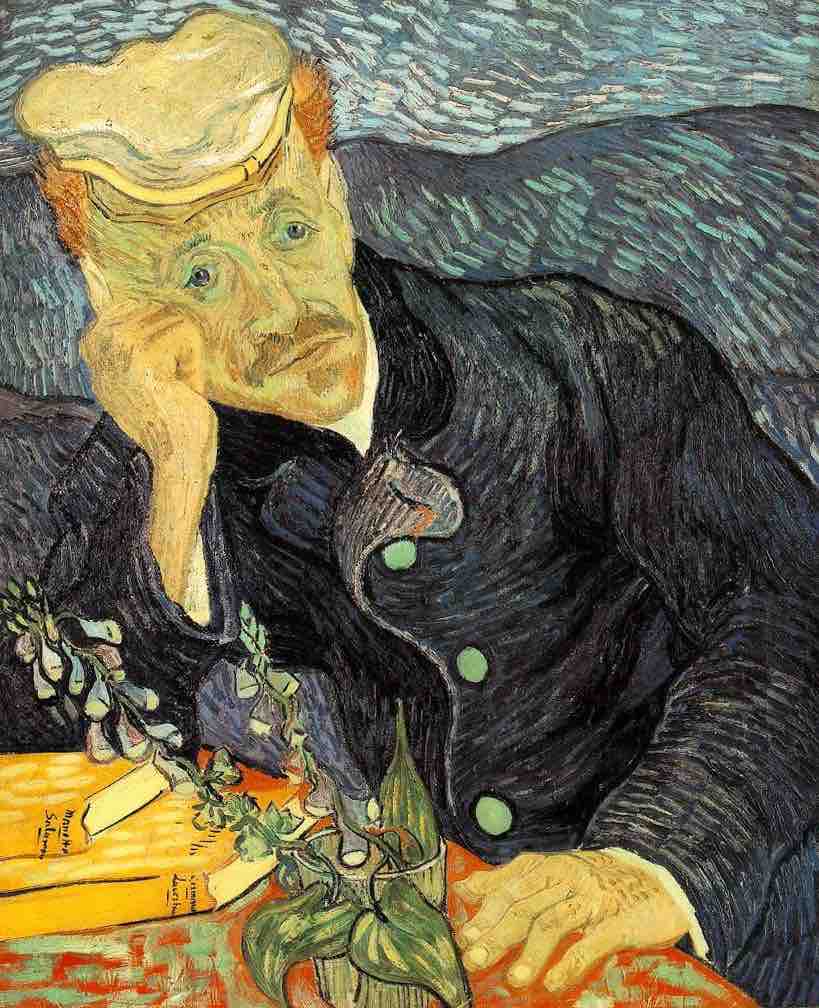 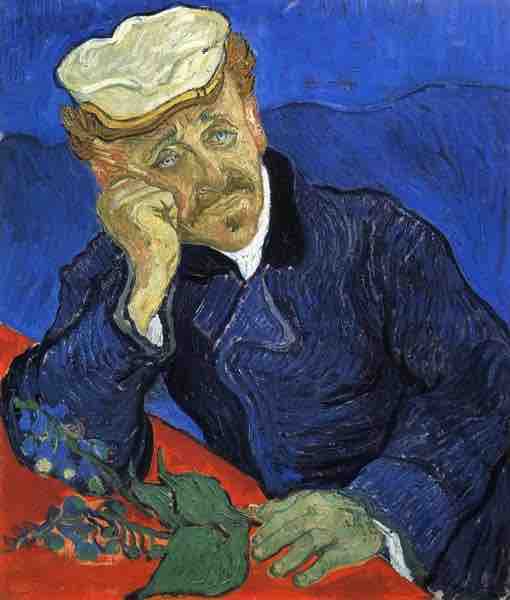 When Vincent wasn’t spending time with Dr. Gachet, he was exploring the local sites, including Auvers’s main church.  As he wrote to his sister Wil,

What is more I have a larger painting of the village church, an effect derived from the contrast of the violet-blue structure against a sky of deep and simple blue, pure cobalt; the stained glass windows are like patches of ultramarine; the roof is violet and partly orange.  In the foreground a bit of greenery and flowers and sand with pink sunlight shining on it. 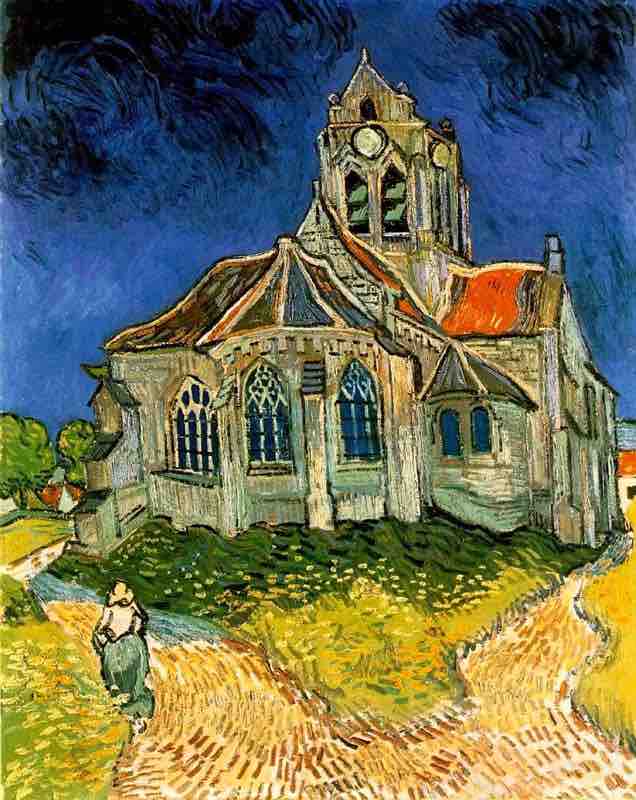 Yet, it  is not only the striking colors that electrify The Church in Auvers: the wavy movement of the church’s outlines and the short uneven brushstrokes of the ground add to the emotional intensity of the painting. Has a small earthquake recently hit the otherwise peaceful town?

Van Gogh was moved too by another building in Auvers that he captured in White House in the Night with Figures and a Star, referred to in a letter to Theo.

The second study, a white house among the trees with a star in the night sky and an orange light shining through the window and black foliage and a dark pink note. (Letter 642) 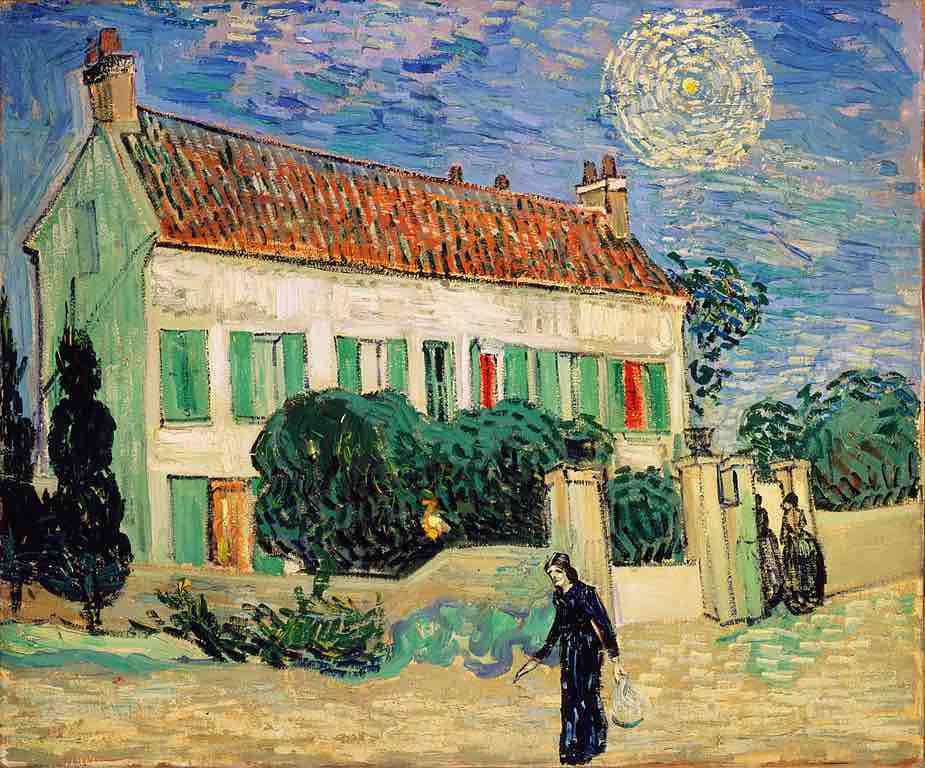 Is that lonely star a a sole survivor of Van Gogh’s most famous painting, Starry Night, done in Saint Remy just the summer before?

The next work of art, Daubigny’s Garden, set in the backyard of the widow of the nineteenth century landscape painter, Charles Francois Daubigny, may seem calmer in its feeling: a hidden oasis of roses and lilac bushes behind the Auvers church.  Or is it? 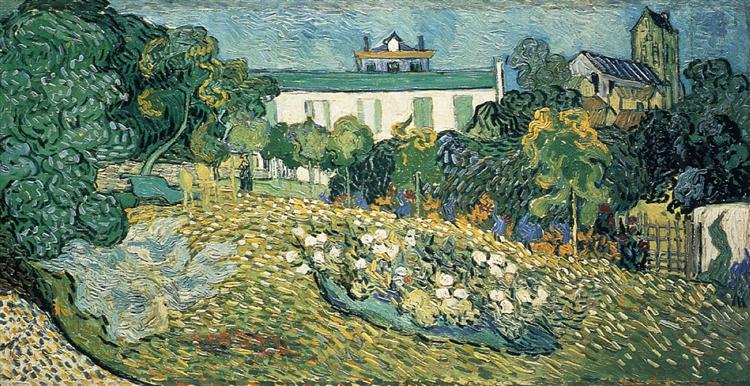 Vincent had  already expressed his love of the endless wheat fields outside Auvers  to his mother and sister Wil in a letter of July 11.

I am myself quite absorbed in the immense plain with wheat fields against the hills, boundless as a sea, delicate yellow, delicate soft green, the delicate violet of a ploughed and weeded piece of ground, checkered at regular intervals with the green of flowering potato plants, everything under a sky of delicate blue, white, pink, violet tones.

Yet, these same fields could arouse darker emotions resulting in very different creations.  In another letter to Theo written July 10, a day before his correspondence with his mother and Wil, Vincent refers to two paintings that he had just completed.

Two of them are vast fields of wheat under troubled skies, and I did not need to go out of my way to try to express sadness and extreme loneliness. (Letter 649)

One of them has usually been identified as Wheat Field Under Clouded Sky, a haunting interpretation of an infinite world where the earth and sky merge on the distant horizon. Have you ever seen such strange clouds?

The other could be the legendary Crows Over the Wheat Field, almost mythic in its reputation as Van Gogh’s final work of art.  Is it a vision or hallucination?  Are the crows an ominous sign of Vincent’s impending self-destruction?

If true, Crows Over the Wheat Field, would have been done by July 10 over two weeks before Van Gogh’s death.   Instead, the less dramatic Sheaves of Wheat is considered more likely to be painted in the closing days of Vincent’s life. 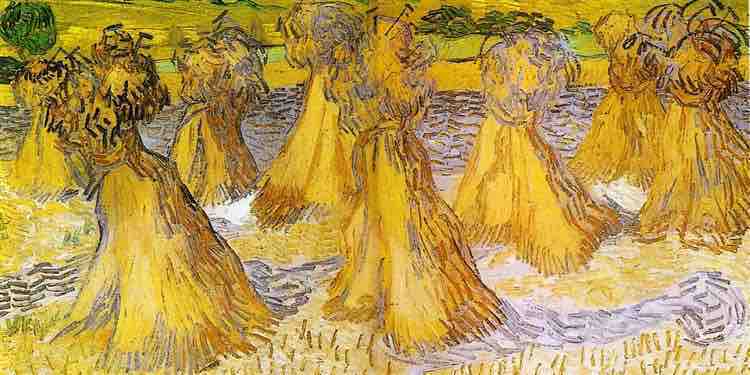 Vincent was probably shot on Sunday evening, July 27.  Mortally wounded with a bullet in his side, Vincent was able to stagger to the local inn where he had been staying.  For more than 24 hours he lingered, while Theo, Dr. Gachet, the innkeeper Ravoux,  a fellow Dutchman Anton Hirschig, and possibly others kept vigil, over the still conscious Vincent.  He died at 1:00 a.m. on July 29; according to Theo, his last words were “I wish I could pass away like this.”

It was  Dr. Gachet, once the subject of Vincent’s portraits, who immortalized his departed patient and friend in a graphic drawing, Vincent Van Gogh on His Deathbed. 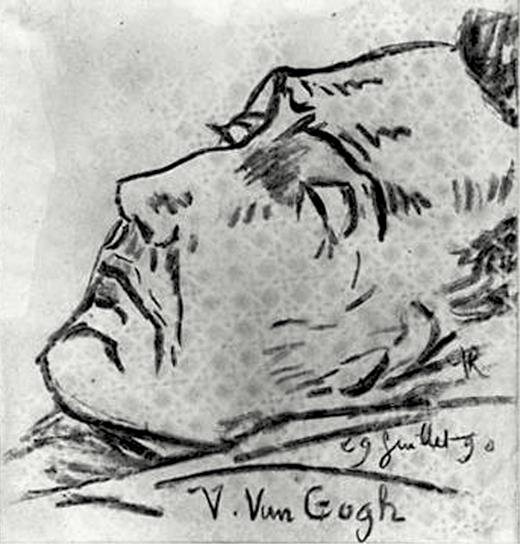 However, the artist Emile Bernard’s account of the funeral held the next day, July 30, is the perhaps most enduring memorial to Vincent.

On the walls of the room where his body lay all his last canvases were nailed, forming something like a halo around him and rendering—through the brilliance of the genius that shone from them—this death even more painful for us artists.

On the coffin a simple white drapery, then masses of flowers, sunflowers which he loved so much, yellow dahlias, yellow flowers everywhere. (August 1 letter from Bernard to G. Albert Aurier)

For what better way to honor Vincent, then with his beloved sunflowers.

The numbered letters quoted are from Vincent to his brother Theo

The images above are used solely for educational purposes