Click on the works of art to ENLARGE or ENHANCE them on our FAST FACTS page below.

Our artistic companion of the week, William Merritt Chase was one of the most versatile American painters of the late nineteenth century and renowned for mastering a variety of styles. However, he is popularly identified as an American Impressionist today.

So take an art journey into Chase’s colorful world! 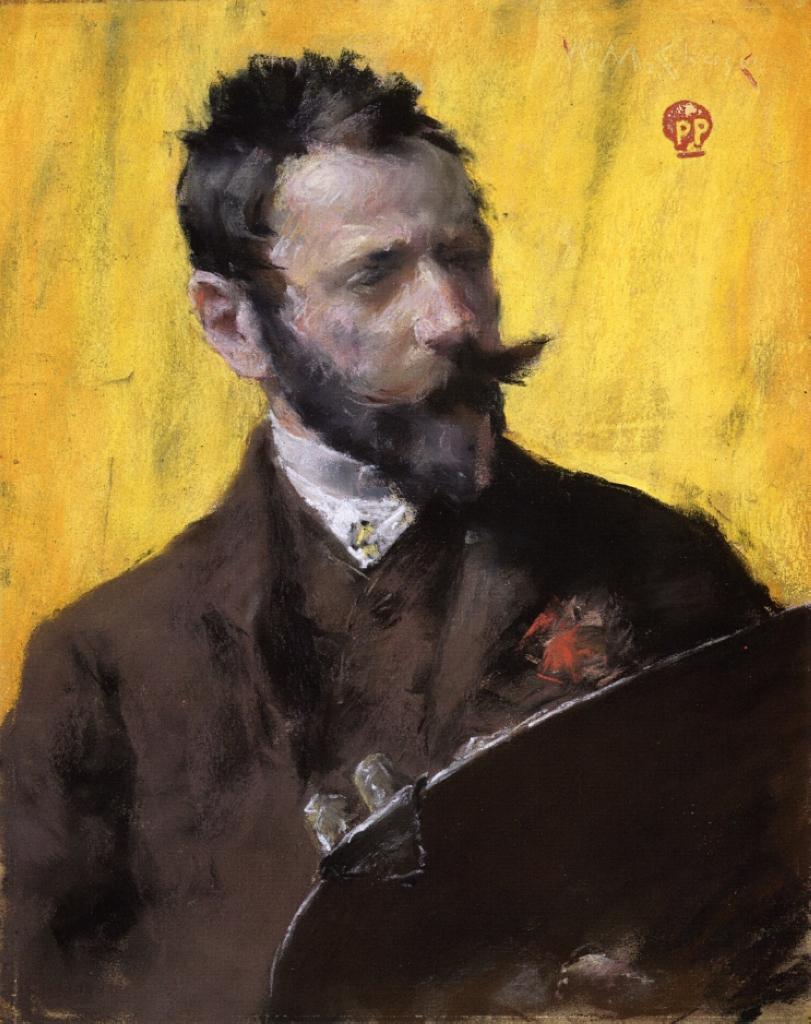 AMERICAN ABROAD:   Major breakthrough in 1871 when given funding by circle of businessmen to attend Royal Academy in Munich or in Chase’s words, “My God, I’d rather go to Europe than to heaven!”  Returns to United States in 1878, although would regularly travel overseas including Paris, Madrid, and London.

NEW YORK, NEW YORK:  Establishes himself successfully, somehow acquiring one of best studios in New York City; becomes known not only as an accomplished painter, but often for flamboyant lifestyle, including parading his Russian wolfhounds in public. Also for more than 30 years, Chase reigned as leading American art teacher, influencing generations of artists such as Georgia O’Keeffe and Rockwell Kent; member and head of art societies—in 1902, joined the group called The Ten American Painters often categorized as American Impressionists. 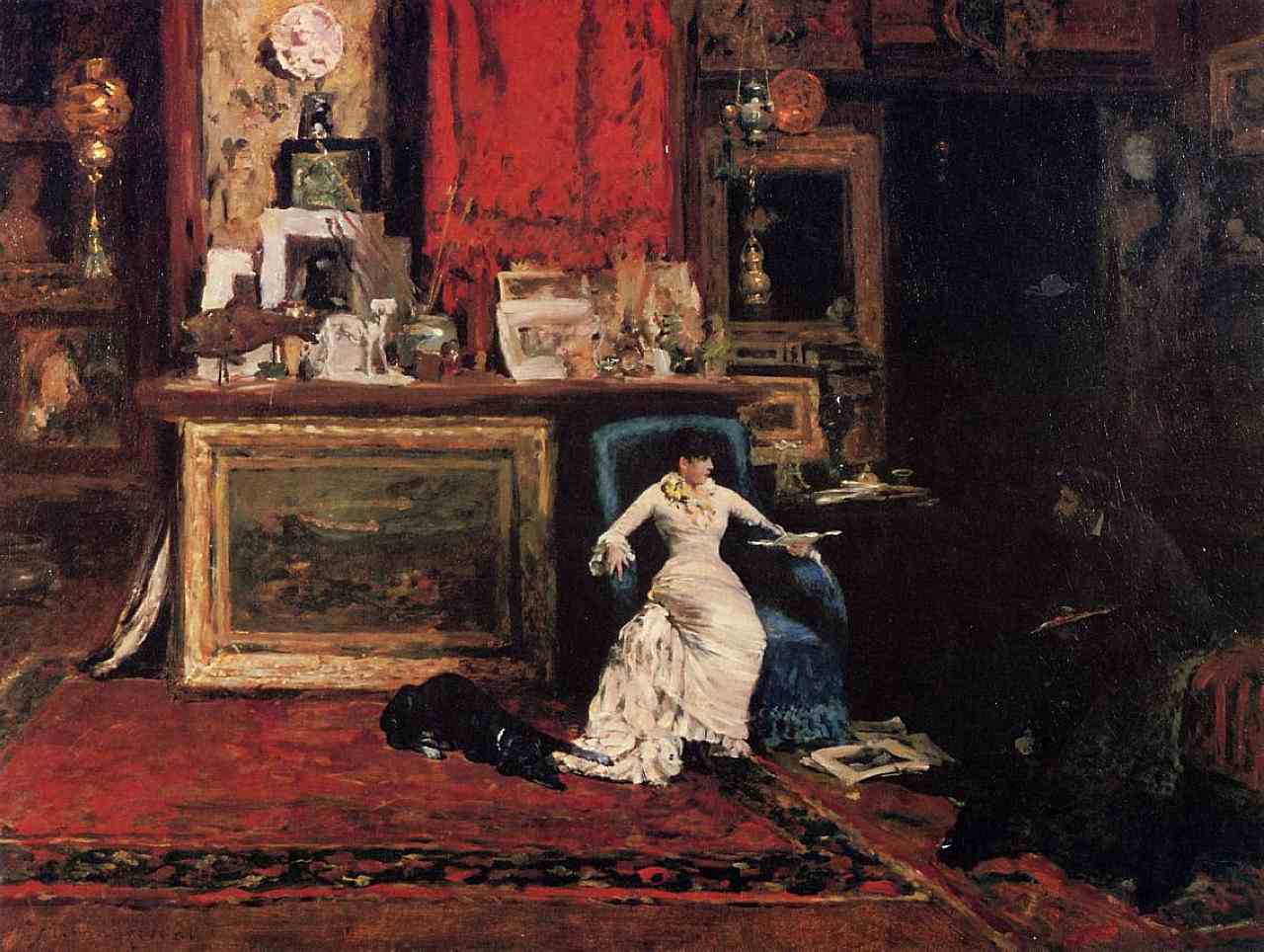 ALICE, THE GIRLS, AND LONG ISLAND:   Chase considered a confirmed bachelor until his marriage at 37 in 1886; wife, Alice Gerson was only 20, had met her when she was about 14, daughter of a friend; inspirational model, painted her from teenage years during courtship through maturity as wife and mother. 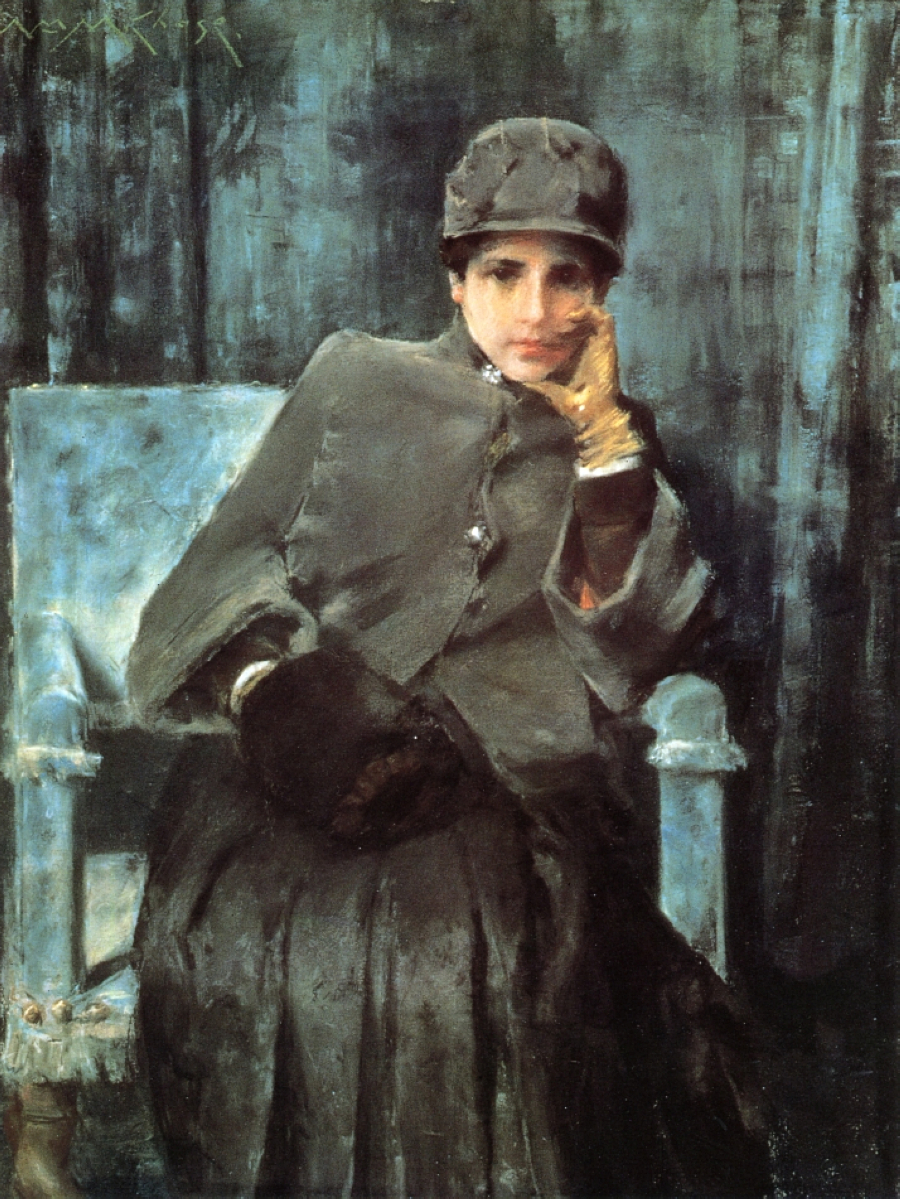 Let’s get to know Chase’s family in what was probably their favorite place, Shinnecock Hills, where they lived in a house constructed specially for the artist by the acclaimed architect Stanford White. An environment of light and airy rooms depicted below in which Alice could easily relax and her young daughters (usually identified as Alice, Jr., 5 and Koto, 3) comfortably play. (Note: enlarge the vibrant pastel Hall at Shinnecock and you’ll also see Chase himself reflected in the armoire against the far wall.) 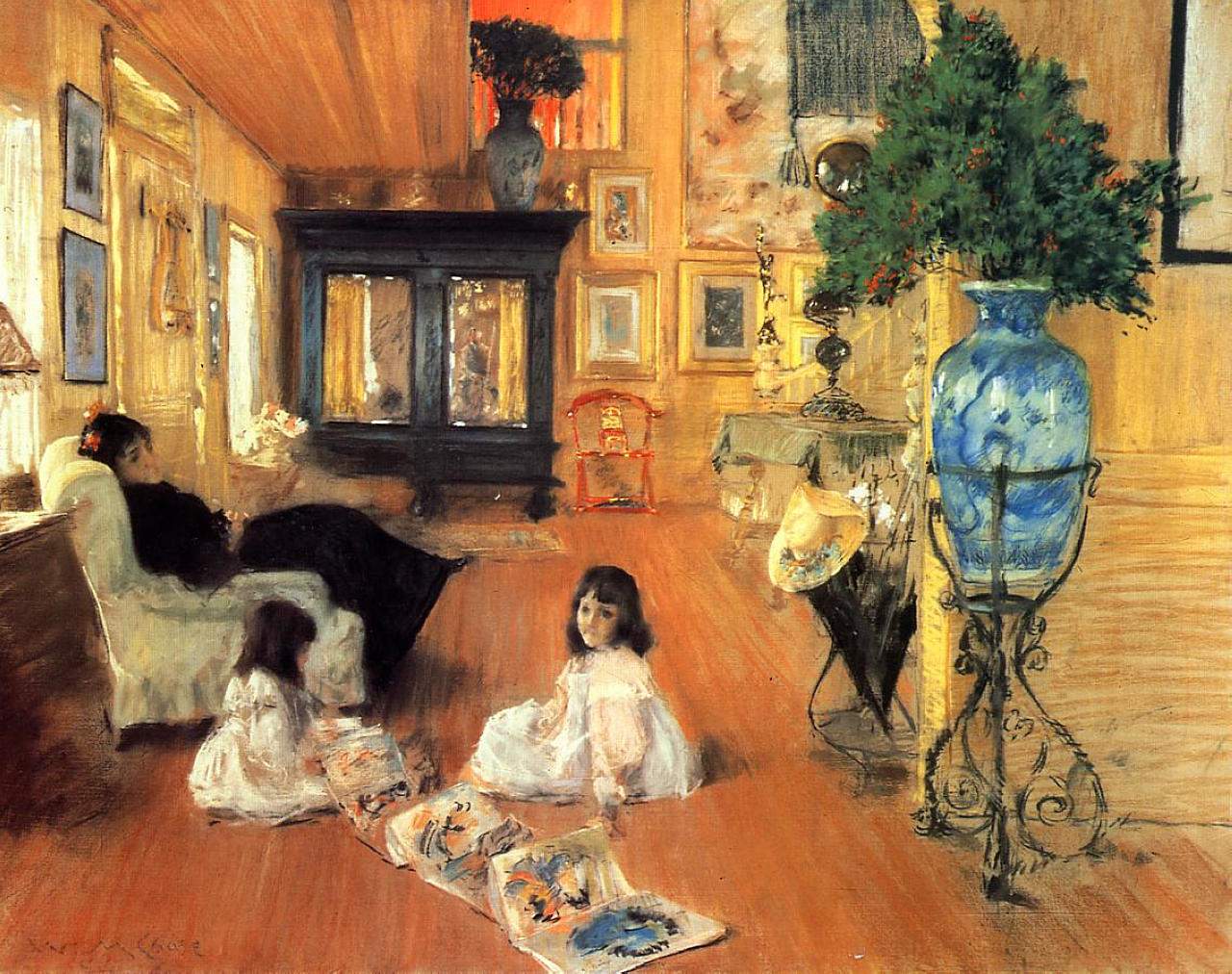 Is that the eldest Alice, Jr. again in Shinnecock Studio, Interior, now absorbed in an unfolding display of her father’s collection of Japanese prints?  Or does Chase’s richly colored Impressionistic pastel make it difficult to tell? 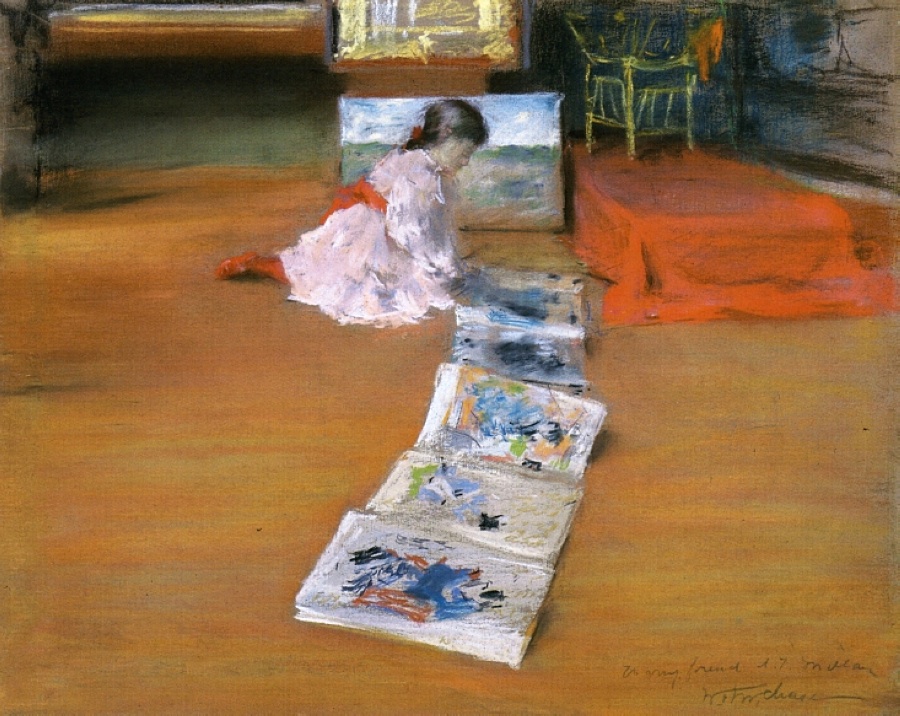 While in Idle Hours, the Chases have escaped to a panorama of sea and sky. Alice Chase who is probably wearing the striking red bonnet appears to be reading to two anonymous members of her brood, while another woman sits at a distance as if seeking a moment of quiet and solitude. 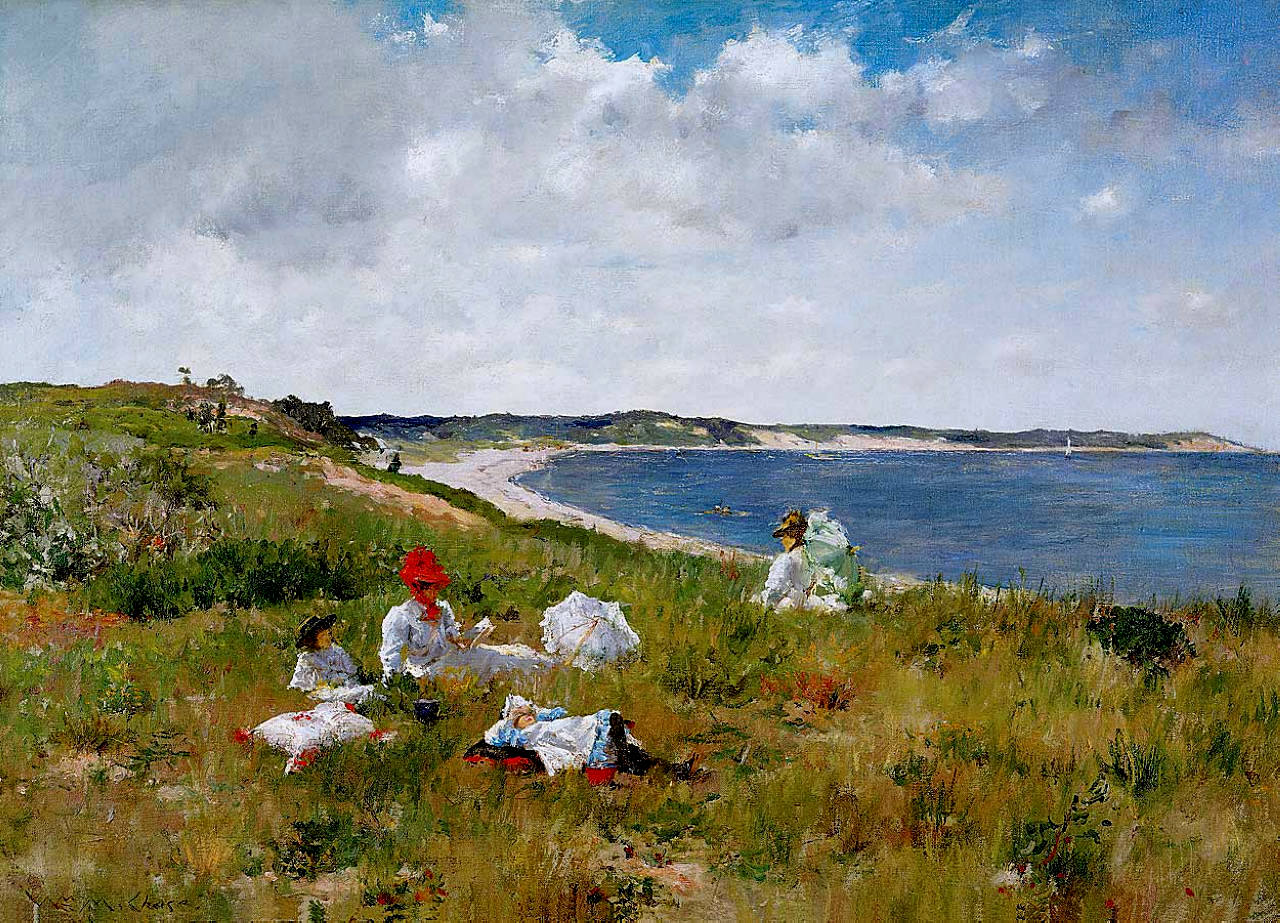 “The successful picture ought to look as if it has been blown on the canvas with one puff.” William Merritt Chase

*The above quotes are from William Merritt Chase by Ronald G. Pisano, Watson-Guptill Publications, New York, 1986.

The images are used solely for educational purposes.