THE LITTLE PRINCESS: A CHILDHOOD ON CANVAS

Whatever happened to Infanta Margarita Teresa, the 5 year old royal star of Diego Velasquez’s most celebrated work Las Meninas done in 1656? Where she is the center of attention, privileged daughter of Spain’s Philip IV and destined one day to be an empress. Yet some 350 years later, doesn’t she appeal to us more as a child, than a princess?  Engaging her admirers with a naturalness and charm, evident in the detail below. The result not only of Velazquez’s magical brushwork and rich color, but his personal relationship as well as rapport with the family of his monarch. (See: full painting at the end of the blog.) 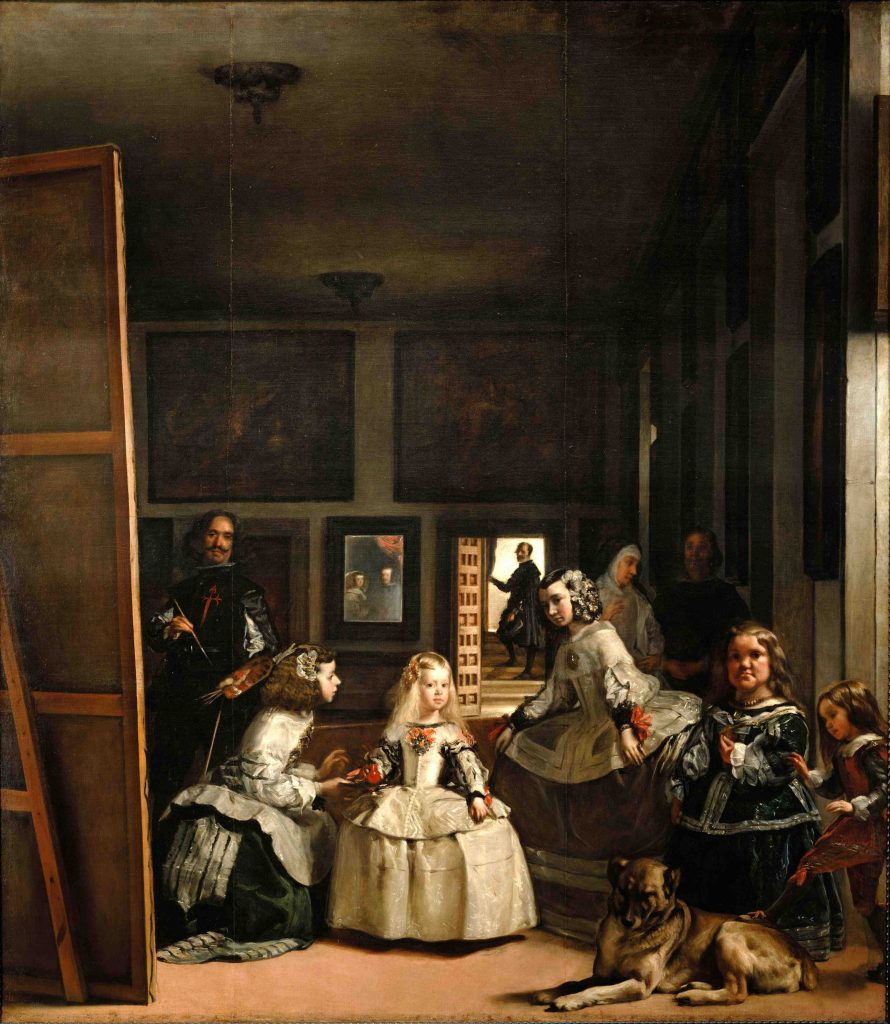 The Spanish master had already been court painter for over three decades, entrusted with recreating the official likenesses of the king, his wives (Queen Elisabeth of France who died in 1644, followed by Queen Mariana, Margarita’s mother) and several children. Balthasar Carlos (1629-1646), for example, son of Philip’s first marriage, preceded Margarita as Velazquez’s frequent subject portrayed on horseback and in other settings.

For the artist would be commissioned at least 4 times to depict Margarita, initially as a toddler in Infanta Margarita Teresa in Pink Dress.  Still emerging from babyhood, she could probably barely pose for the painting session.

Although in Infanta Margarita Teresa in Silver Dress, possibly done the same year as Las Meninas, the princess assumes, if tentatively, the stance of a member of the Habsburg dynasty. Her expression serious, controlled, perhaps an indication she is beginning to comprehend her regal position in Spanish society.

While at 8, in Infanta Teresa in Blue Dress, she now may understand the inevitability of her fate: an arranged marriage with her uncle Leopold I, Emperor of the Holy Roman Empire.  Is she subdued, even sad?  Or perhaps actually recovering from an illness?

However, in Infanta Margarita Teresa, she appears to revel in her appearance: the expansive brocade gown, oversized handkerchief draped over her skirt, and elaborate hairdo, mandatory for any fashionable grand lady.  A portrait likely created for her future husband Leopold I in Vienna, who was probably eagerly waiting for his fiancee to develop into a woman. She would marry him at 17, in 1666, bearing 4 children before her death at only 21 in 1673.

Yet, how old is the princess here?  Because of disagreement about the work’s dates and authorship, her age could range from 9 to 14.  If executed in 1660, the year Velazquez died, he might have been its painter, with the collaboration of  his son-in-law Jean Bautista Martinez del Mazo (c. 1612-1667). But according to the website of he Prado, where it presently hangs, Mazo is listed as the sole artist with 1665 as the date.

What do you think? 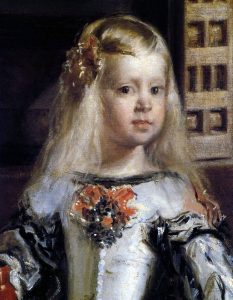 LAS MENINAS (THE MAIDS OF HONOR) 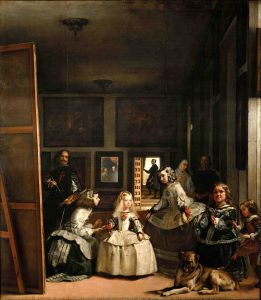 Diego Velazquez (1599-1660).  The above blog is based mainly on the websites of the Museo del Prado in Madrid and the Kunsthistorisches Museum in Vienna.

Welcome in the change of seasons with Through an Artist’s Eyes: Learning to Live Creatively by Joan Hart.