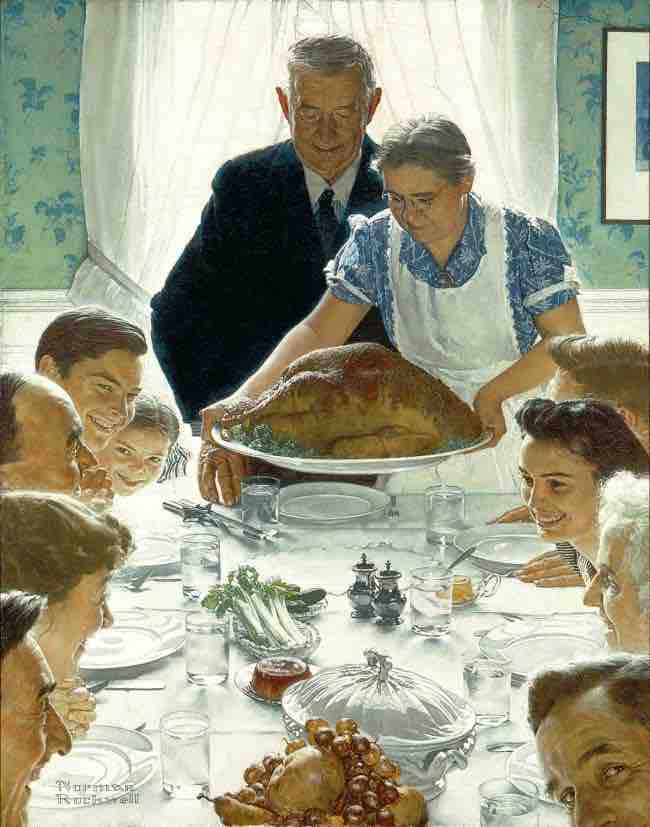 In the middle of World War II, American icon Norman Rockwell (1894-1978), created four paintings inspired by President Franklin D. Roosevelt’s Four Freedoms State of the Union Address given in 1941 (and quoted below).  These works debuted on the cover of the Saturday Evening Post in early 1943, as part of the artist’s patriotic contribution to the country’s war effort.

Today, Freedom of Want above also has come to symbolize the annual celebration of Thanksgiving.

The first is FREEDOM OF SPEECH and expression—everywhere in the world.

The second is the FREEDOM OF EVERY PERSON TO WORSHIP GOD IN HIS OWN WAY—everywhere in the world.

The third is FREEDOM FROM WANT—which translated into world terms, means economic understandings which will secure to every nation a healthy peacetime life for its inhabitants—everywhere in the world.

The fourth is FREEDOM FROM FEAR—which translated into world terms, means a world-wide reduction of armaments to such a point and in such a thorough fashion that no nation will be in a position to commit an act of physical aggression against any neighbor—anywhere in the world.