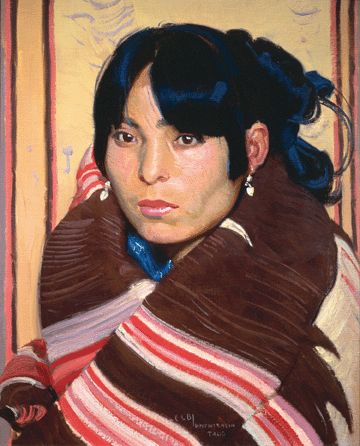 Is she the Mona Lisa of New Mexico?  She might be missing the smile, but her beauty is riveting, based on the strength and stoicism of her heritage.  Her sculpted features framed by midnight blue hair have an almost hypnotic effect, enhanced by the colors, texture and design of her clothing.

When artist Ernest Blumenschein (1874-1960) created Portrait of Albedia in 1918, he was seeking to capture the unique character of the Native American inhabitants of the Taos Pueblo, with the skills he had acquired in the faraway art capitals of New York and Paris.  As a founder of the Taos Society of Artists in 1915, he was an influential figure in the organization; his home is now a historic museum open to the public.

Also click on the blog below, to learn more about Blumenschein’s colleague Ernest Martin Hennings:

And here is a list of other members of the Taos Society of Artists:

Information on Ernest Blumenschein is from a number of sources including National Museum of American Art, written by several authors, published by the museum, Smithsonian Institution, Washington, D.C., 1995.