This second installment of my tribute to Vincent van Gogh will focus on the two remaining sunflowers paintings of the four work series.

The two largest canvases, 12 Sunflowers in a Vase (Neue Pinakothek Museum, Munich) and 14 Sunflowers in a Vase (National Gallery of Art, London) were done in August, 1888.  However, Vincent also created what are known as repetitions of each one for Paul Gauguin in January, 1889.  Because the quality of the images of the repetitions is higher, I will be spotlighting them.

In a letter from Vincent to Theo, written about August 21, 1888 in Arles, France, the artist informed his brother that he was currently working on three canvases of sunflowers.

I work on it all these mornings, from sunrise.  Because the flowers wilt quickly and it’s a matter of doing the whole thing in one go.

Viincent was moving shortly into a house (the two story building with green shutters below), he had rented near the railroad station. In the spring, he had invited Gauguin to join him in Arles and was eagerly waiting for his friend’s arrival. His goal was to establish  what he called the Studio of the South with Gauguin and he wanted to decorate it, as he told Theo, with nothing but large sunflowers envisioning a dozen or so panels. 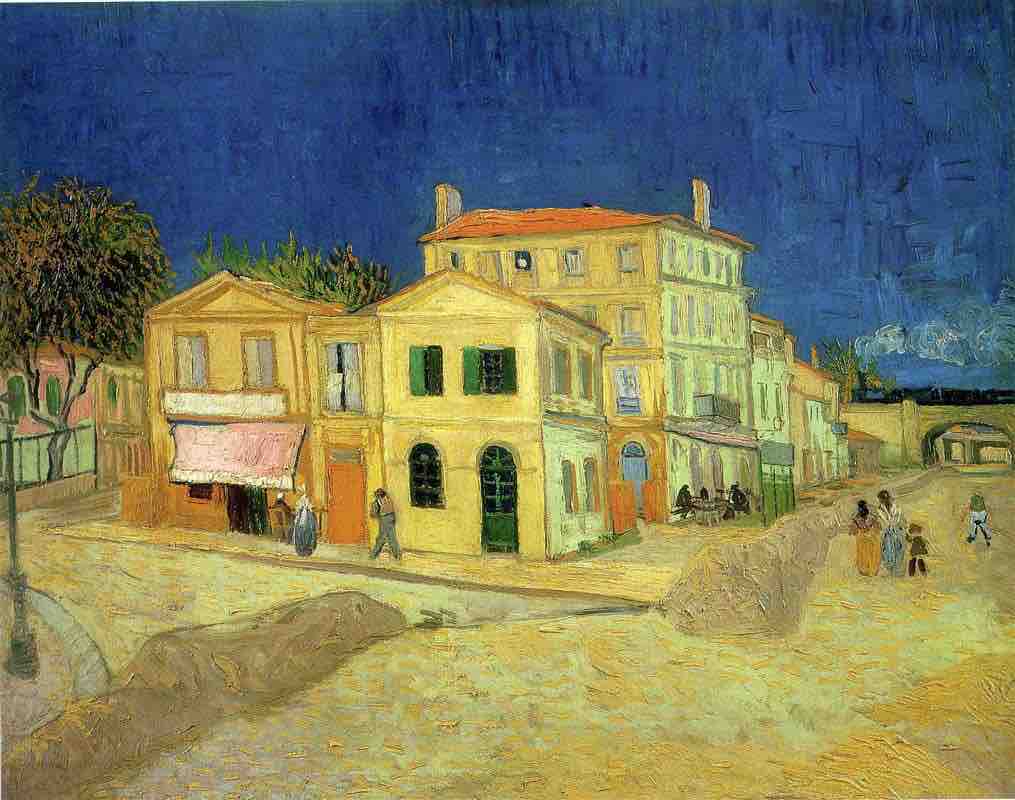 Vincent started with three sunflowers, then six and then doubled the number again with 12 Sunflowers in a Vase.  Although is the twelfth sunflower difficult to distinguish?

I’m now on the fourth painting of sunflowers.  The fourth one is a bouquet of 14 flowers and is on a yellow background, like a still life of quinces and lemons I did back then. Only it’s much bigger. 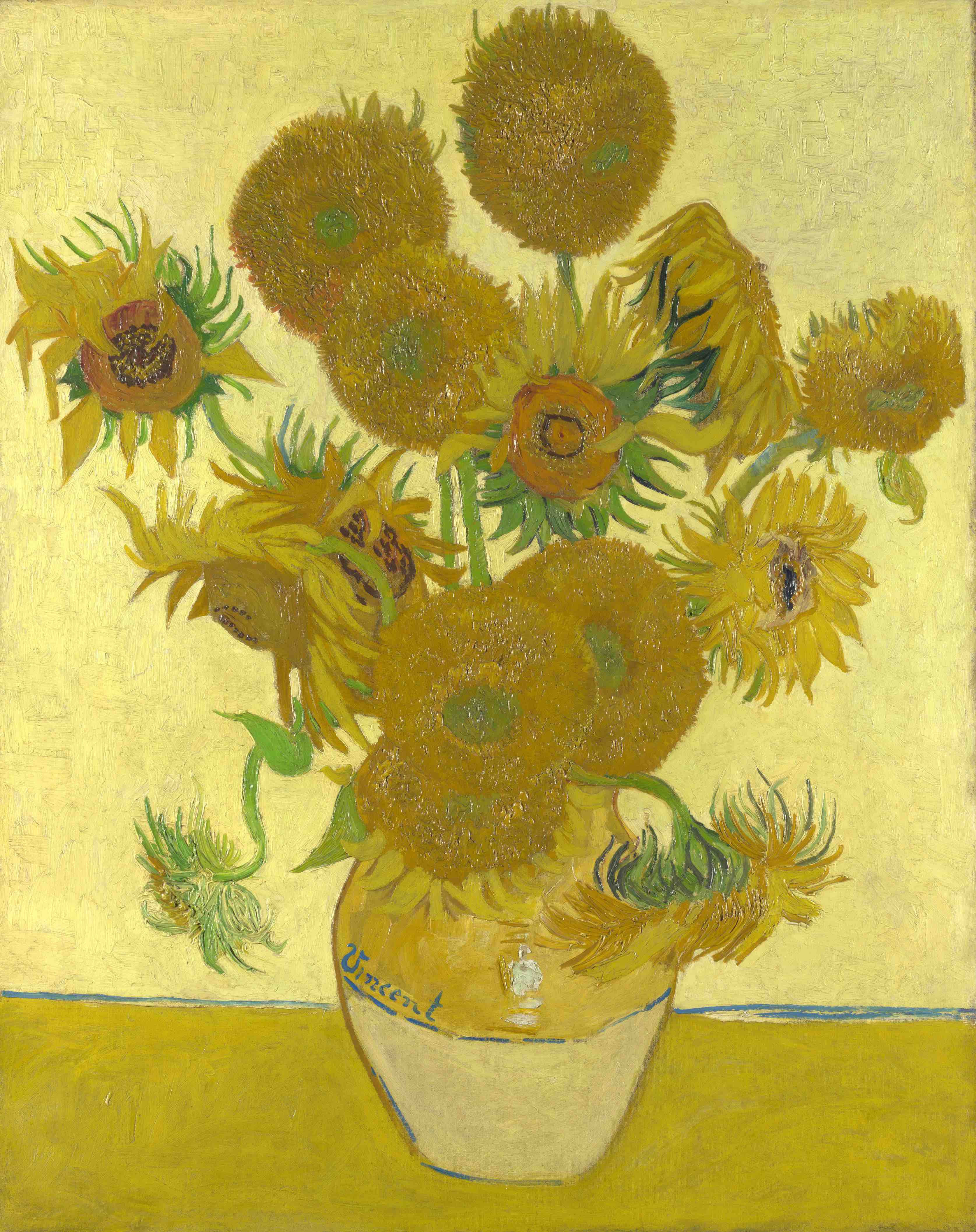 Vincent continues to mention the progress of his sunflowers in succeeding letters written around August 26 and September 4.  Then on September 9, he reveals his plans for Gauguin’s room:

…or what will be Gauguin’s room, if Gauguin comes, will have a decoration of large yellow sunflowers on its white walls.  Opening the window in the morning, you’ll see the greenery in the gardens and the rising of the sun and the entrance of the town.

But you’ll see these big paintings of bouquets of 12, 14 sunflowers stuffed into this tiny little boudoir with a pretty bed and everything else elegant.  it won’t be commonplace.

When Gauguin did finally arrive at the end of October (after months of delay), he slept in this incredible room during his nine weeks stay in Arles. Vincent’s own bedroom  was nearby on the second floor, which he recreated in detail three times in 1888 and 1889; the Art Institute of Chicago version is below. 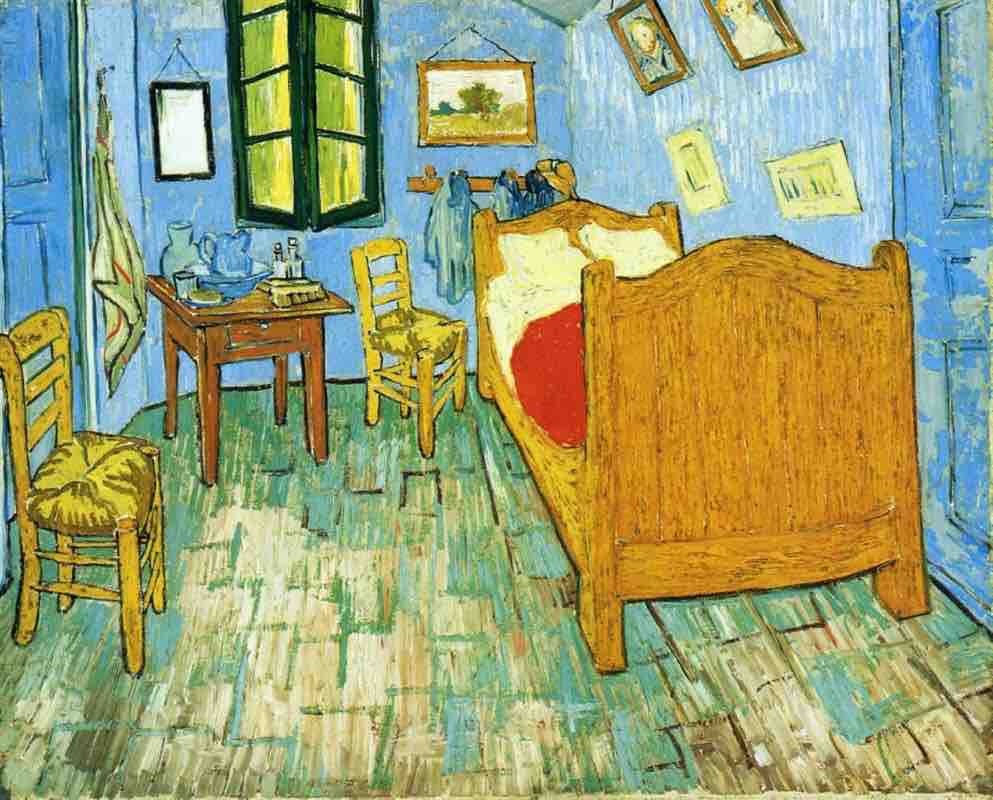 Yet, Vincent refrained from depicting Gauguin quarters.  Did he feel as if he would be intruding on his friend’s privacy?

But Gauguin never forgot Vincent’s sunflowers. Despite their break–up just before Christmas, when Gauguin left Vincent after a volatile confrontation, the two artists continued to correspond.  According to Vincent’s account in a February 3, 1889 letter to Theo, Gauguin had a complete infatuation with the sunflowers paintings and had asked Vincent for them, probably offering an exchange for his own works.  Instead Van Gogh produced repetitions of 12 Sunflowers in a Vase and 14 Sunflowers in a Vase.  Ironically, Gauguin never received them.

Museum goers today, though, are certainly flocking to see these cultural icons once intended for Gauguin. Why are Vincent’s sunflowers so popular after more than a century?  Is it because, as in the repetition 12 Sunflowers in a Vase, now at the Philadelphia Museum of Art, each sunflower is a portrait in itself?  Their faces almost human in nature, often turning directly toward us, as if seeking our attention.  And is it their movement too—the rhythmic energy that pushes them in different directions?  Although somehow, don’t they also seem to be pulling together, placed for eternity in the earthware pot, signed by Vincent? 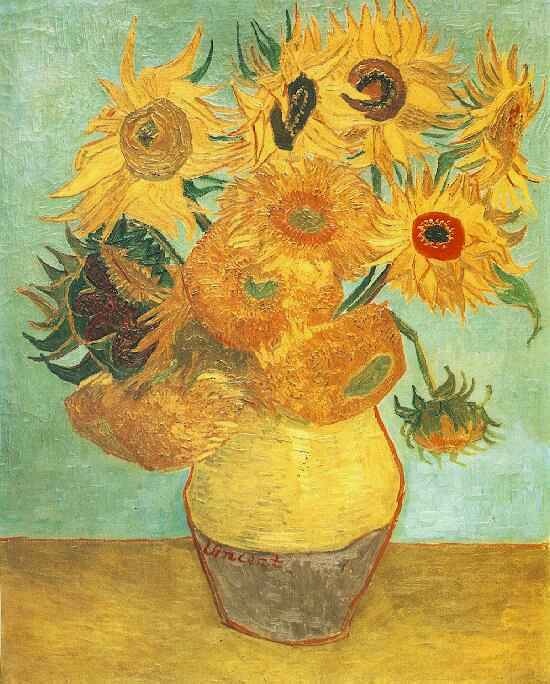 The sunflowers of the second repetition 14 Sunflowers in a Vase (or is it 15?)  at the Van Gogh Museum in Amsterdam are freer and less restricted in their overall appearance, in spite of the increase in number.  Is it because seven are simply balding pods, while the other eight are either loosing their petals or never fully matured?  Although the arrangement is somehow more centralized; the pods act like anchors, three of them standing tall, while their petaled companions twist and turn, anxiously, as their lives diminish with the end of the summer season. Because as Vincent admits to Theo in a letter of September 25, I wanted to do more sunflowers too, but they were already over.

However, don’t the fresh, strong colors ultimately sustain our hope.  Both versions of 14 Sunflowers with a Vase (unlike their companion with its blue background) have reproduced well–not only the yellows, but the touches of green, red, and the soulful blue. 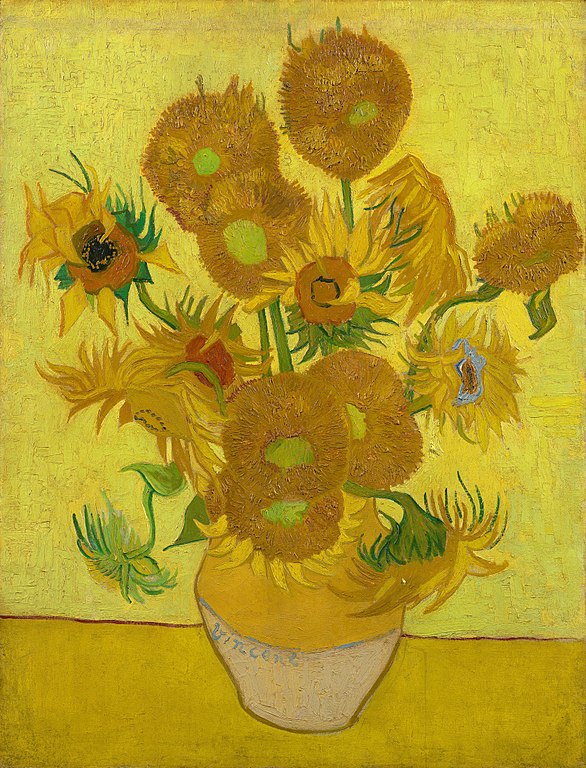 Art historians still debate the chronology and, in some cases, the authenticity of the sunflowers series.  The six sunflowers discussed in this blog and the previous one of August 17 ae accepted as Van Goghs. The provenances, for example, of the pair of 12 and 14 sunflowers done in 1888 are generally verified and the Van Gogh Museum repetition never left Vincent’s family. The Philadelphia Museum of Art’s repetition seems to  have no definite history of ownership.

Another repetition titled 15 Sunflowers in a Vase achieved rock star status when it was sold for the then record-breaking $39,921,750 million dollars in 1987 to Japanese executive Yasuo Goto.  Now part of the collection of the Sompo Japan Museum of Art in Tokyo, it has sometimes been suspected of being a forgery.   Click on the thumbnail below for a larger image. 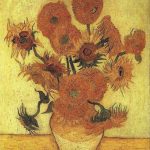 Quotes from Van Gogh’s letters to his brother Theo are found in the website, Van Gogh’s Letters.

Discover how to see with the eyes of Van Gogh and other artists in Through an Artist’s Eyes: Learning to Live Creatively!