PLEASE click on the works of art to ENLARGE or ENHANCE them.

A STAR IS BORN

AND ITS CAST OF CHARACTERS, PART III

In part III*  of A Sunday Afternoon on the Island of La Grande Jatte, i’ll be focusing on the promeneuse—the tall, statuesque lady, standing with her escort in the foreground on our right. I’ve realized that she merits her own blog, not only because of her lead role among the other 47 cast members, but because of her evolution throughout the approximately 2 year period leading up to the masterpiece’s exhibiting in 1886.

For Seurat has left at least 4 studies of his star (3 oil panels and a drawing), allowing us access to the inner workings of an artist’s creative mind, For instance, did he always plan to feature her so prominently? Was she originally meant to be a supporting or even minor player? 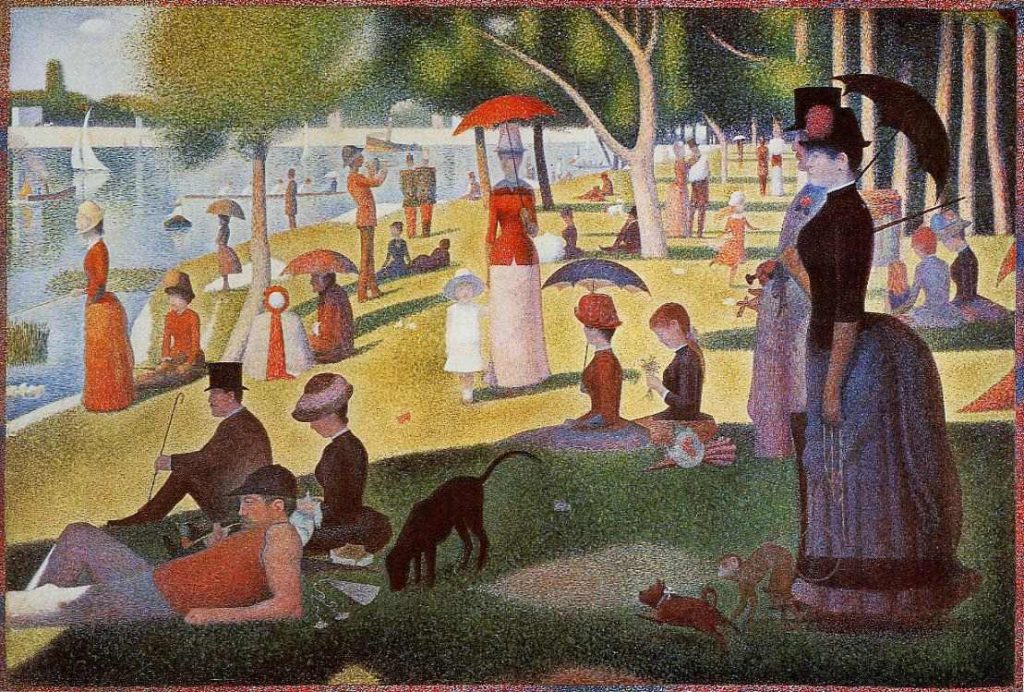 Georges Seurat, A Sunday Afternoon on the Island of La Grande Jatte, 1884-1885, oil on canvas, The Art Institute of Chicago, Illinois

JUST PART OF THE SCENERY

Do you recognize her in this impressionistic oil sketch Woman with a Parasol done in 1884? Here she’s an unimposing figure, almost merging into the background. The colors of  her costume may be varied, ranging from blue to violet to red, yet the overall effect is a patchwork of heavy brushstrokes. 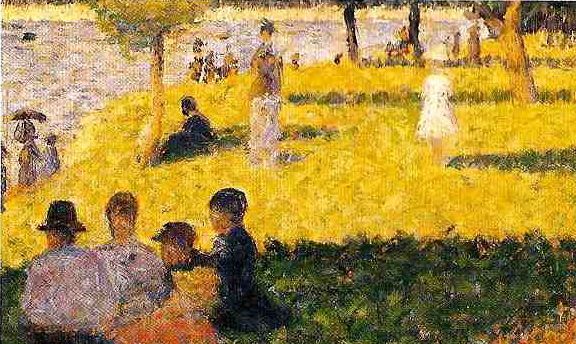 Seurat reportedly observed a woman strolling with her pet monkey during one of his painting campaigns on the Island of La Grande Jatte. Was that the moment when he decided on his prima donna?  Woman with a Monkey, although categorized as a study, is a work of art itself, reminiscent of a stained glass window. The rich black and purple shades especially resonate, forming the basis for the fashionable apparel (plus noticeable bustle) of the promeneuse in the final work. Do you notice other similarites such as the stylish hat and the setting of the trees? 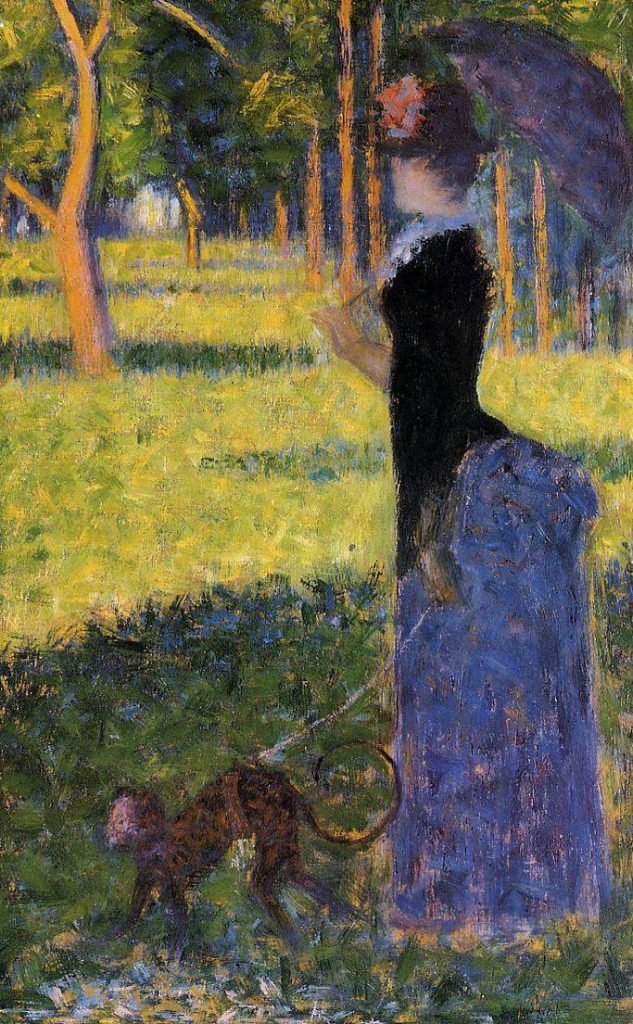 Seurat was probably concentrating on his color scheme in The Couple, concerned about the relationship of the primary and complementary tones.  For although the gentleman companion has now joined the promeneuse, he is a barely discernible silhouette. 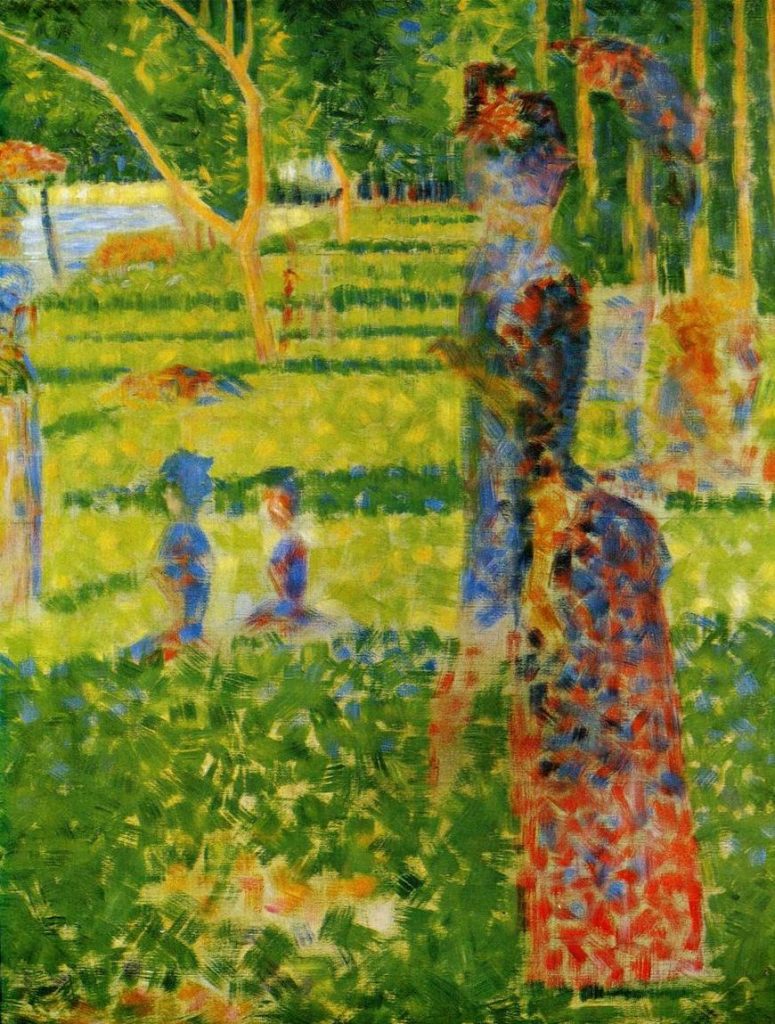 Whatever happened to the promeneuse’s simian friend, who is missing from the previous study as well? Instead Seurat is concerned solely with his human models, using the medium of the conte crayon to help him capture their distinctive stance.

A TRIP TO THE ZOO

Seurat also did practice drawing the monkey whether alone or with his caged sisters and brothers at the zoo. Later he chose to exaggerate the tail for artistic reasons. 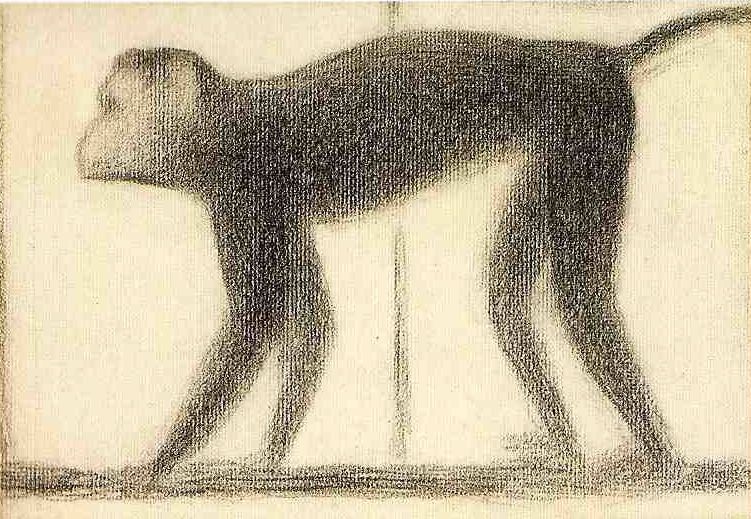 Everyone is in their proper position, though, in the finale.

Is the face of the promeneuse a welcome surprise?  Perhaps Seurat revealed her features in another undisclosed sketch. Or did he prefer to wait, more preoccupied with her dress and bearing in the earlier stages?

Yet, does she remain illusive? Silently staring directly ahead, unaware of her 21st century fans?

The resources for part III can be found on my Monday, November 10th blog.