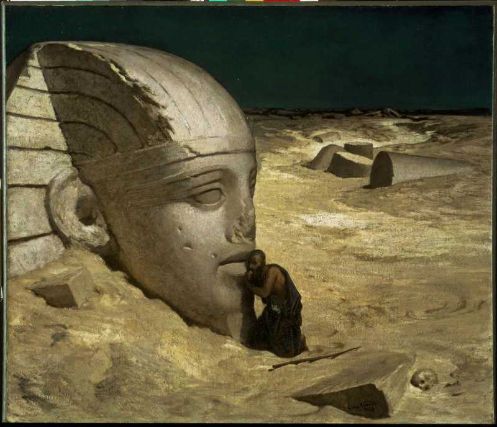 Elihu Vedder, The Questioner of the Sphinx, 1863, oil on canvas, Museum of Fine Arts, Boston

Close-mouthed you sat five thousand years ago and never let out a whisper.

Processions came by, marchers, asking questions you answered with grey

Not one croak of anything you know has come from your cat crouch of ages.

I am one of those who know all you know and I keep my questions: I know

the answers you hold.

Pulitzer prize winning 20th century poet Carl Sandburg (1878-1867) is often best remembered for his works on Abraham Lincoln and other American subjects. Elihu Vedder (1836-1923), born a generation or so earlier, was also from the United States, although he was attracted more to Middle Eastern themes, resulting in such creations as The Questioner of the Sphinx and  his illustrations of The Rubaiyat of Omar Khayyam.