PLEASE CLICK on the works of art to enlarge or enhance them.

AND ITS CAST OF CHARACTERS

This week I’ll be giving a presentation on the Phillips Collection’s current exhibition on Georges Seurat (1859-1891) and the Neo-Impressionist movement.  So how could I resist taking another stroll through this supernova of paintings A Sunday Afternoon on the Island of La Grande Jatte.  Yet, when I’ve stood before it at The Art Institute of Chicago, I have felt overwhelmed, almost as if I’m looking at a monumental, rainbow colored puzzle. I’ve been intimidated too by the onslaught of volumes written on Seurat’s masterpiece including his use of color theory and pointilist technique.

But today and Wednesday, I’m going to relax a bit and become better acquainted with many of  the 48 inhabitants (plus 3 dogs) of this timeless park just outside of Paris.  By taking us on a guided tour viewing highlights of the almost 60 studies Seurat created as he gradually developed and populated his private world, reminding us of both the theater and cinema. We’ll be meeting some of the artist’s original cast who were cut from the final production, as well as the star players.

I’ll be referring to Seurat’s ultimate work as A Sunday Afternoon (which will be shown twice in the blog) so as not to confuse it with the preliminary drawings and sketches.  Just click to enlarge all the images. 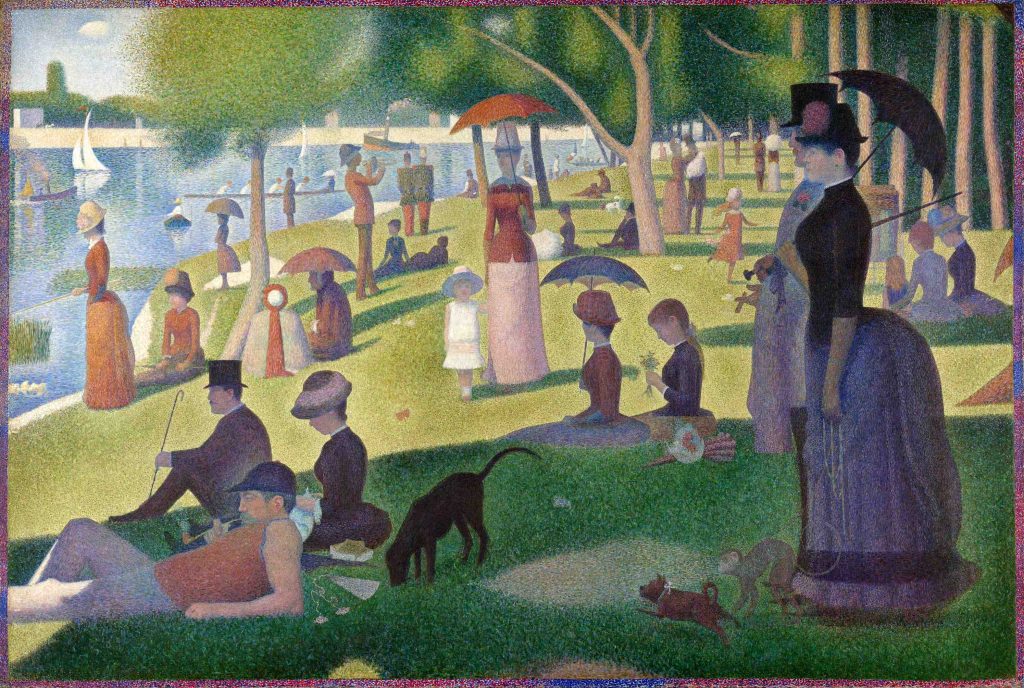 Georges Seurat, A Sunday Afternoon on the Island of La Grande Jatte, 1884-1885, oil on canvas,The Art Institute of Chicago, Illinois

With others like Paul Signac, Seurat became enthralled by the scientific analysis of color based on the theory of Chevreul and other researchers. Recognized the significance of complementary and contrasting colors. Also did not mix colors on palette before applying them; laid them side by side in tiny brushstrokes on the canvas, allowing them to merge optically. Became a leader of what is known as Neo-Impressionism, influencing numerous artists (including Vincent van Gogh).

Only 25, when he began A Sunday Afternoon, consuming at least 2 years of his career. Seurat himself gives the starting date as May 22, 1884; the completed painting debuted at the 1886 exhibition of the Impressionists. The exact chronological order of his studies has not been determined, although scholars and art historians have provided some general guidelines.

THE FISHERWOMAN: A CONSTANT PRESENCE

Although Seurat officially commenced A Sunday Afternoon in the spring of 1884, Woman Fishing done the previous year is likely the model for the orange clad figure on the far left foreground. She is a bit slimmer in the artist’s conte crayon drawing, an almost ghostly apparition shimmering in the soft light.  However, in the painted version she is certainly more substantial, concentrating fully on her task.  Oblivious to any distractions, including the conversation of her nearby friend. 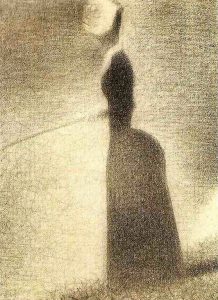 8 vessels have been identified in A Sunday Morning: 2 steamboats, 2 skiffs with rowers, a boat with a fisherman, and 3 sail boats. Sailboat, the oil on panel below, is a forerunner though unlike its descendants remains near land. In spite of its impressionistic quality, clues to the future painting are evident in the placement of the 4 trees.

Here Seurat provides us with a clearer view of the quartet of trees, without the rough patches of pigment. The grass is smoother and the shadows more pronounced.  A Soldier or Cadet from St. Cyr has appeared too attired in a uniform of complementary blue and orange. He will basically maintain that position in A Sunday Morning, except he’ll be joined by a companion and a number of attractive ladies.

BACK TO THE DRAWING BOARD

Seurat traveled to his special corner of the island every day during the months of 1884, sometimes taking his drawing board with him. How often did he patiently outline the curving form of the central tree of A Sunday Afternoon, although oddly without the branch that usually extends from it. The medium of the conte crayon also allowed him to subtlely shade the right edges, emphasizing the innate grace of nature.

DO YOU SEE THE DOG?

In Landscape: Island of Grande Jatte, Seurat has now set the stage for his performers in the later A Sunday Afternoon; even the shadows are ready, contrasting areas of dark green. Which figures will enter first?  A speck-like white dog in the far background, who continues his run in the final work located slightly more to the left.

The artist displayed this painting (done on canvas rather than the panel of the other studies) in December, 1884. The decorated border on the frame was added in 1885.

Seurat probably executed the following oil sketches before Landscape: Island of Grande Jatte above, while he was experimenting with various groupings for A Sunday Afternoon.  The majority of these figures were quickly eliminated, allowing us just passing glances of these summer idlers enjoying some leisure time, whether basically separate from others, 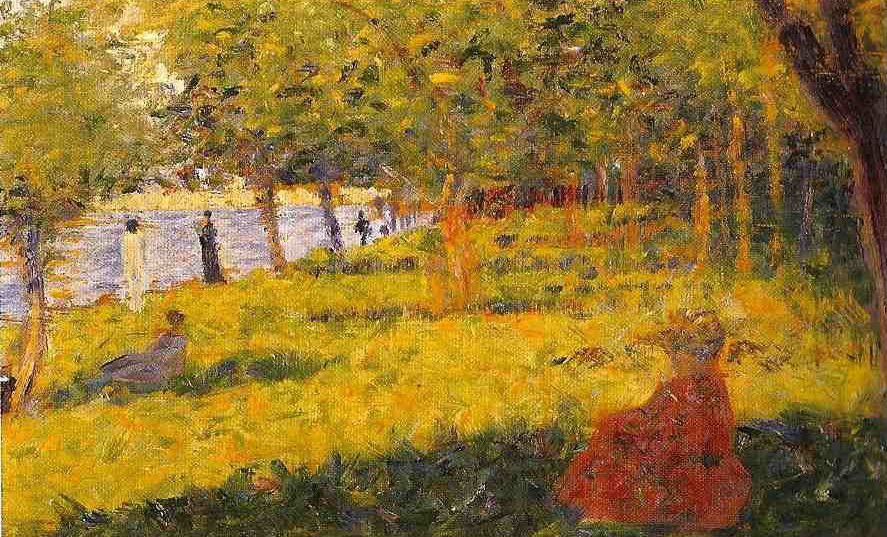 or in crowded gatherings.

Yet, he did form some ideas and motifs that were utilized in the 1884-1885 masterpiece. For instance, in the Standing Man, Seurat lays the foundation for one of his most important characters in A Sunday Afternoon—the cigar smoking dandy and male half of the towering couple in the foreground.  Notice too the emergence of a pair on our right.

I’ve inserted A Sunday Afternoon again so you don’t have to scroll up and down.

Georges Seurat, A Sunday Afternoon on the Island of La Grande Jatte

A TRIO OF MEN

Do you also see how Seurat would replace the laborers or workmen in the oil study with more fashionable individuals in A Sunday Afternoon?

And how the two women with parasols would be reduced to one—the young girl bowed over a bouquet of flowers remaining as well. (Note the barely visible woman fishing.)

The woman with the Rose-Colored Skirt 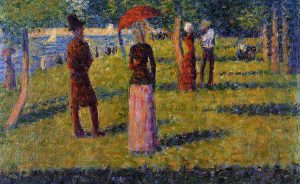 Woman with a Monkey

*The quote is by Paul Signac.

And take the pathway to the arts in Through an Artist’s Eyes: Learning to Live Creatively!