Click on the photographs to enlarge or enhance them.

Monday at the Art Museum

Recently, the news has been dominated by reports of hostage kidnapping and beheadings in the Middle East. Yet, more than 660 years ago in 1347, six of the leading citizens of Calais were ready to sacrifice themselves to save their fellow townspeople. Because for nearly a year, the French port had been under seige from English King Edward III and the populace was facing starvation and death.  According to 14th century historian Jean Froissart, Eustache de Saint-Pierre then resolved  to die in exchange for the survival of the men, women, and children of Calais.

The richest burgher in the town, Sir Eustache de Saint-Pierre, got up and said: “Gentlemen, it would be a great shame to allow so many people to starve to death….I have such faith and trust in gaining pardon and grace from our Lord if I die in the attempt, that I will put myself forward as the first.  I will willingly go out in my shirt, bareheaded and barefoot with a halter (noose) around my neck and put myself at the mercy of the King of England.”

In 1884, the town council of Calais voted to honor the heroism of Saint-Pierre and the five other volunteers with a memorial. They chose Auguste Rodin (1840-1917), who was already revolutionizing the art form of sculpture, for the commission.  Currently, at least 11 casts of The Burghers of Calais can be found around the world, from Paris to London to Tokyo. I’m going to be taking you on a virtual tour of the example in the Hirshhorn Museum Sculpture Garden in Washington, D.C. today and tomorrow (see: end of blog for link to bronze casting).* 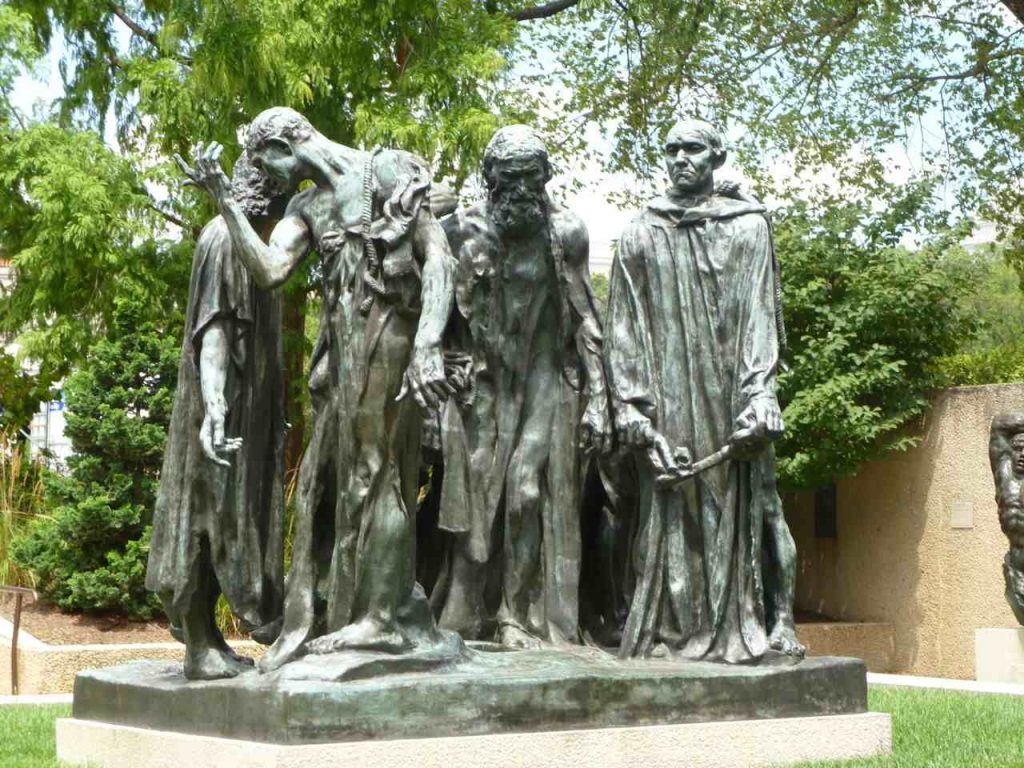 The Burghers of Calais is a wonderful work to photograph, allowing shots from  multiple angles, as you walk around it. Rodin was criticized, especially by his Calais employers, for neither organizing the figures in a a pyramid nor wanting them placed on an elevated pedestal, which was the traditional practice in the late 19th century.  Rodin envisioned his sculpture on a plane very low to enable the spectators to penetrate the heart of the subject, like the entombments in our churches, where the group is almost on a ground level.  In this way, the group becomes more familiar and plunges the viewers deeper into the tragedy and sacrifice of the drama. 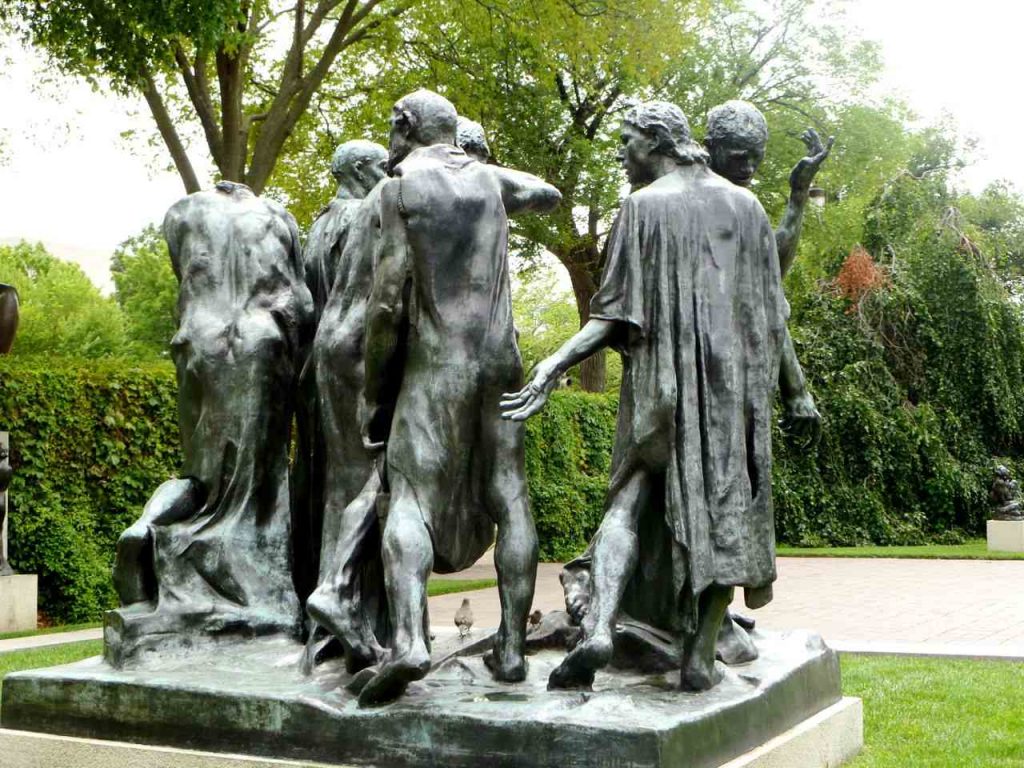 The Burghers of Calais, back view, photograph, Joan Hart

The Hirshhorn’s Burghers of Calais is on a flat, concrete block but perhaps Rodin would have at least tolerated its positioning. However, he bitterly complained when his sculpture was erected in 1895, on a high platform in a Calais public park, surrounded by a fence; only in 1924, did the city’s officials attempt to fulfill Rodin’s wishes, moving it to a lower, more accessible pedestal in front of the city hall.

Rodin toiled for almost a decade (even when his pay was temporarily suspended because of Calais’ financial situation) on the monumental figures of Saint-Pierre, Jean D’Aire, the brothers, Jacques and Pierre Wiessant, Andrieu d’Andres, and Jean de Fiennes. Sculpting each one separately before joining them together. For he conceived of them as being inwardly absorbed, turning generally away from one another, in different directions.  In Rodin’s words,

I have…threaded them one behind the other, because in the indecision of the last inner combat, which ensues, between their devotion to their cause and their fear of dying, each of them is isolated in front of his conscience.  They are still questioning themselves to know if they have strength to accomplish the supreme sacrifice…. 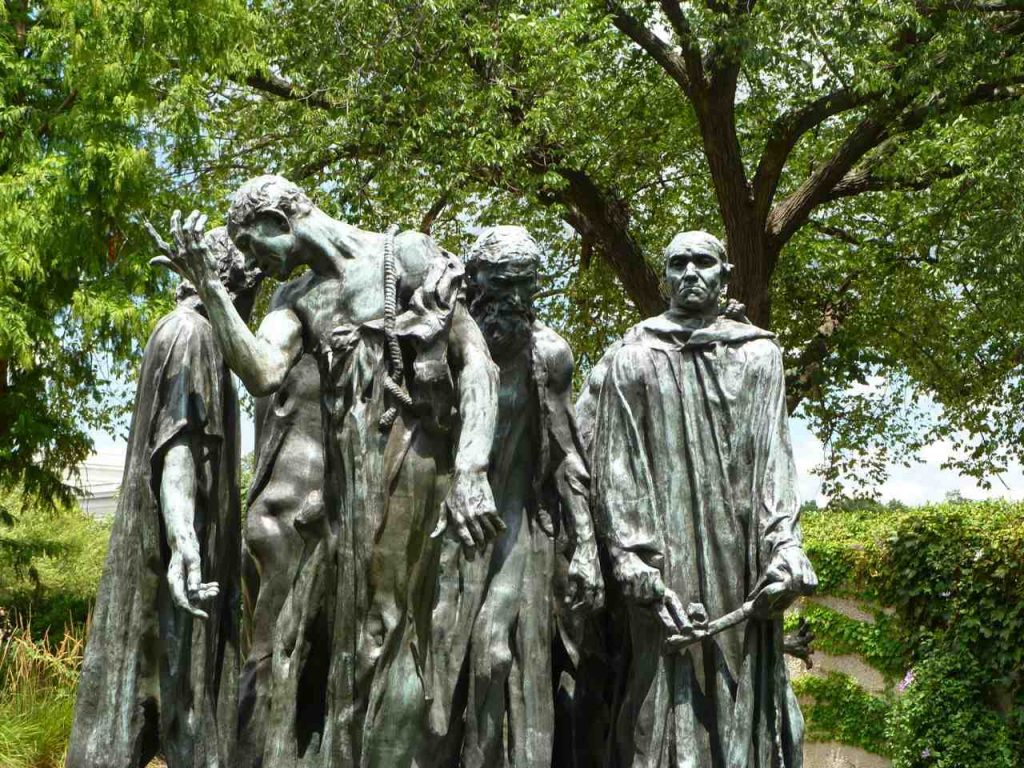 Ironically, they were never executed, spared by the intervention of the pregnant English queen.  However, Rodin has portrayed the burghers before they learned of their ultimate reprieve.  With uncompromising realism, he stresses their deteriorating physical condition as well as fragile psychological state.

I did not hesitate to make them as thin and as weak as possible…..These people, having passed through the privations of a long siege, no longer have anything but skin on their bones.

Their leader Eustache de Saint-Pierre, the oldest member, is bowed over by his travails. Lines of age and deprivation crisscross his face, while his frail shoulders are stooped in resignation, as he waits for the end. 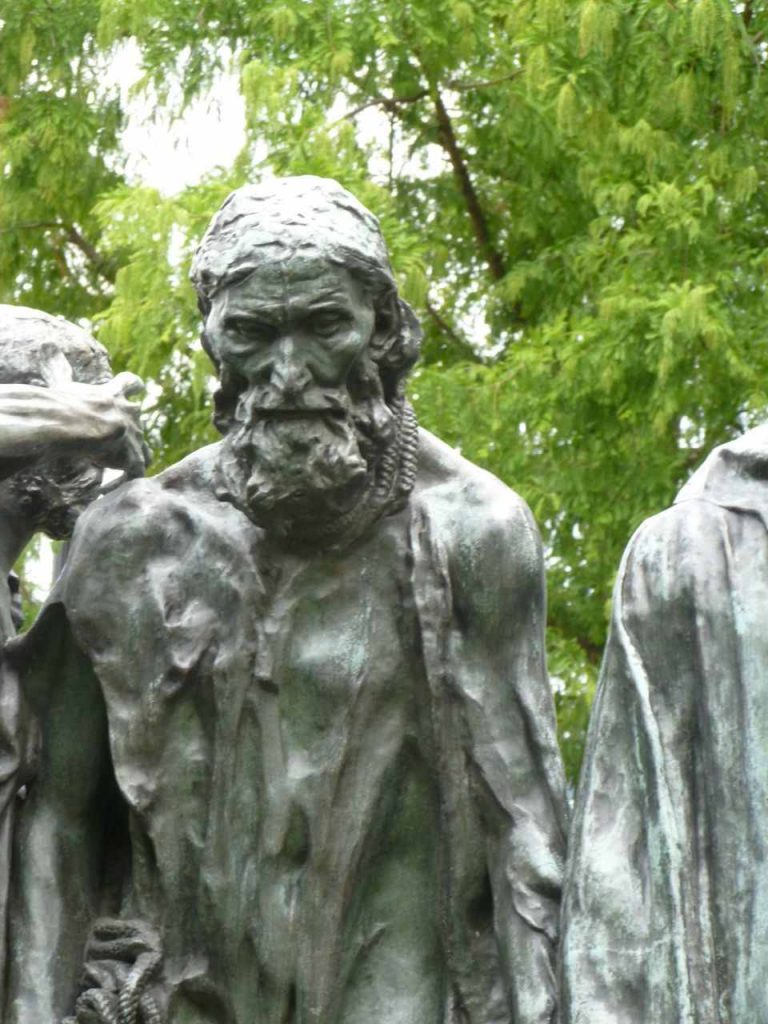 Next to him, though, Jean D’Aire stands proud and defiant, in spite of the rope coiled ominously around his neck. His chin thrust forward too, like a fighter, who refuses to quit. 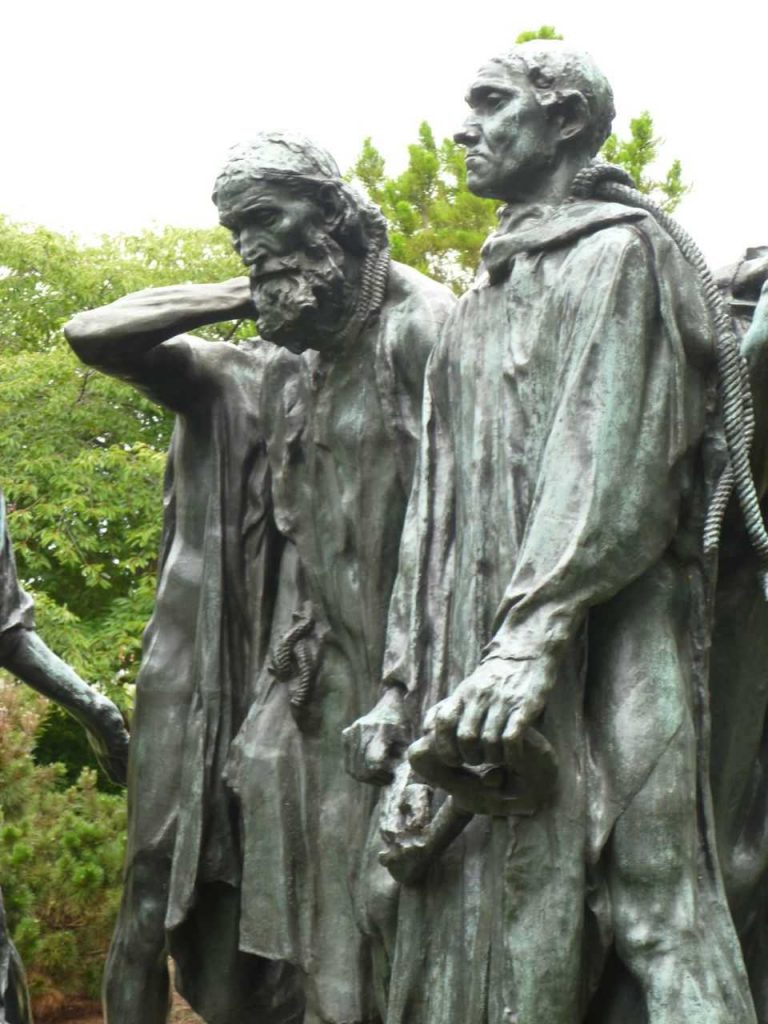 Yet, do we also detect a sadness in his eyes? Is he realizing the preciousness of his passing life? 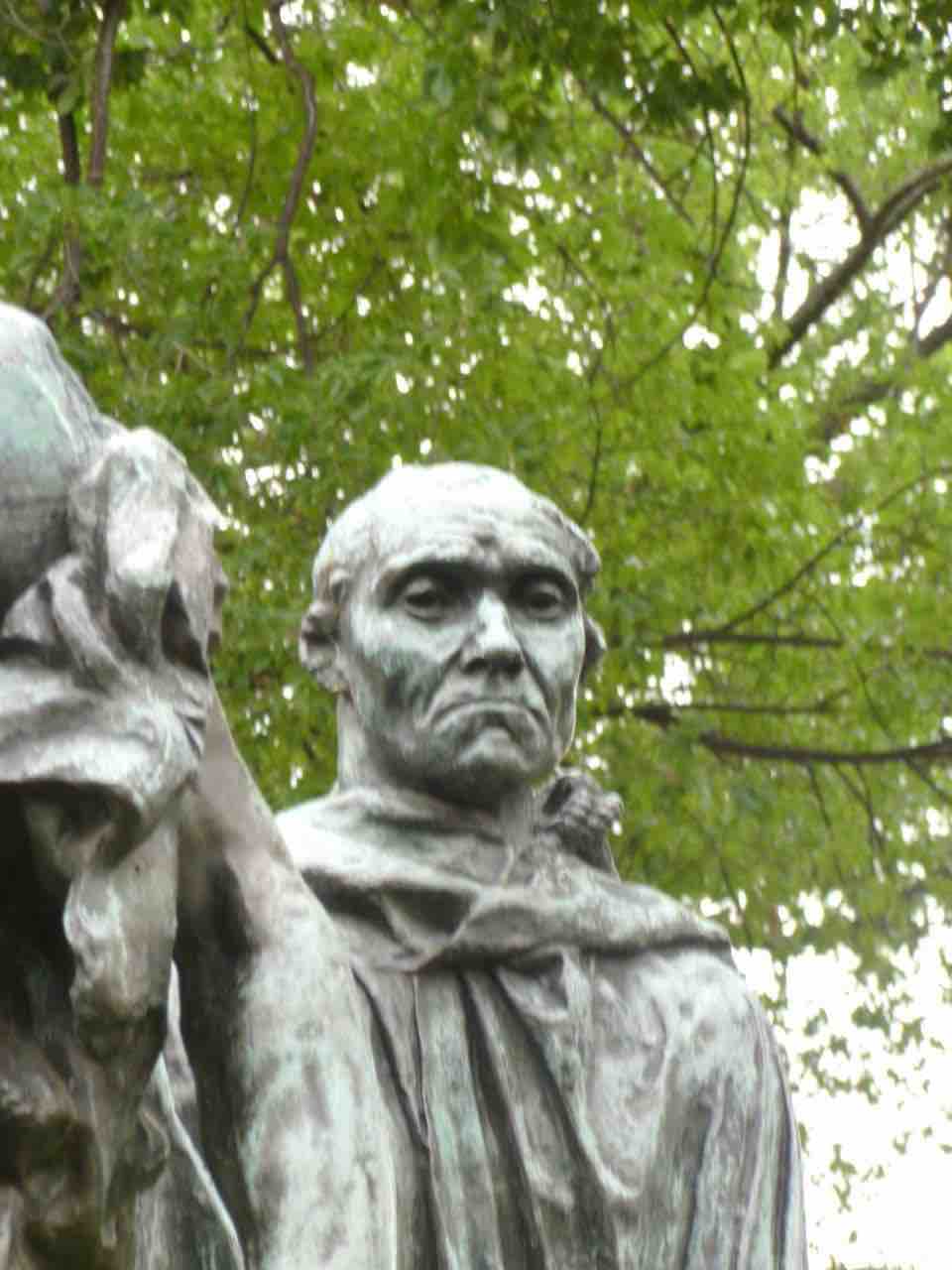 Or simply numbed by his imminent fate, unable to move, 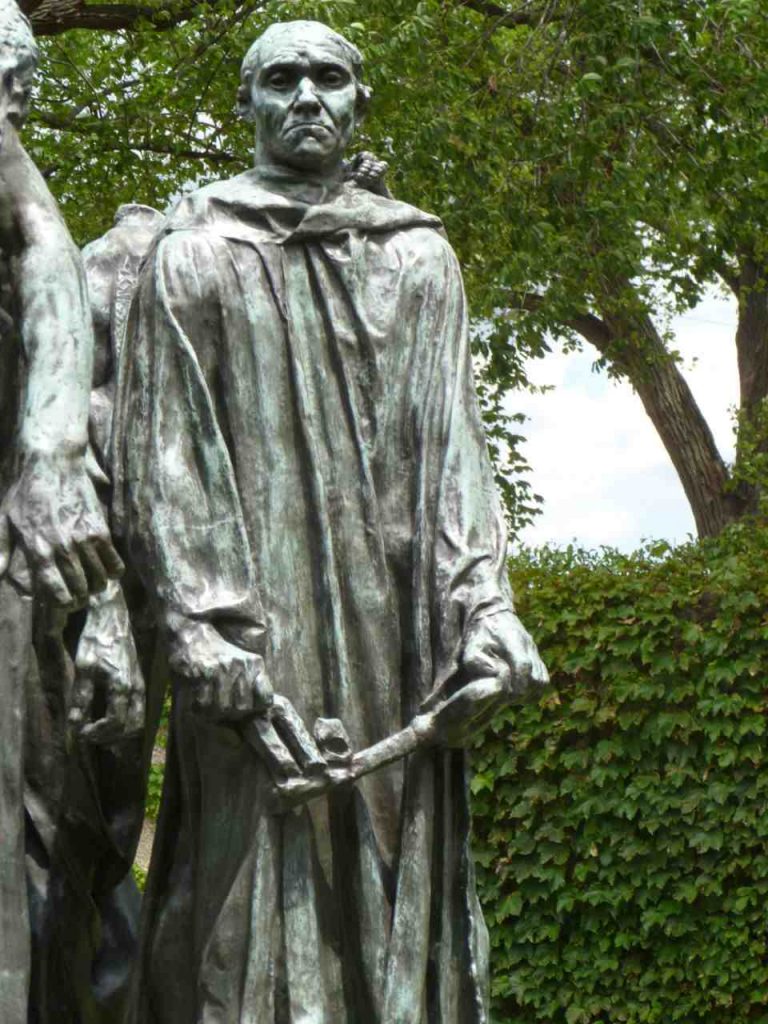 weighed down by his massive feet, implanted on the ground. Although he manages to hold onto his greatest responsibility–the key to Calais. 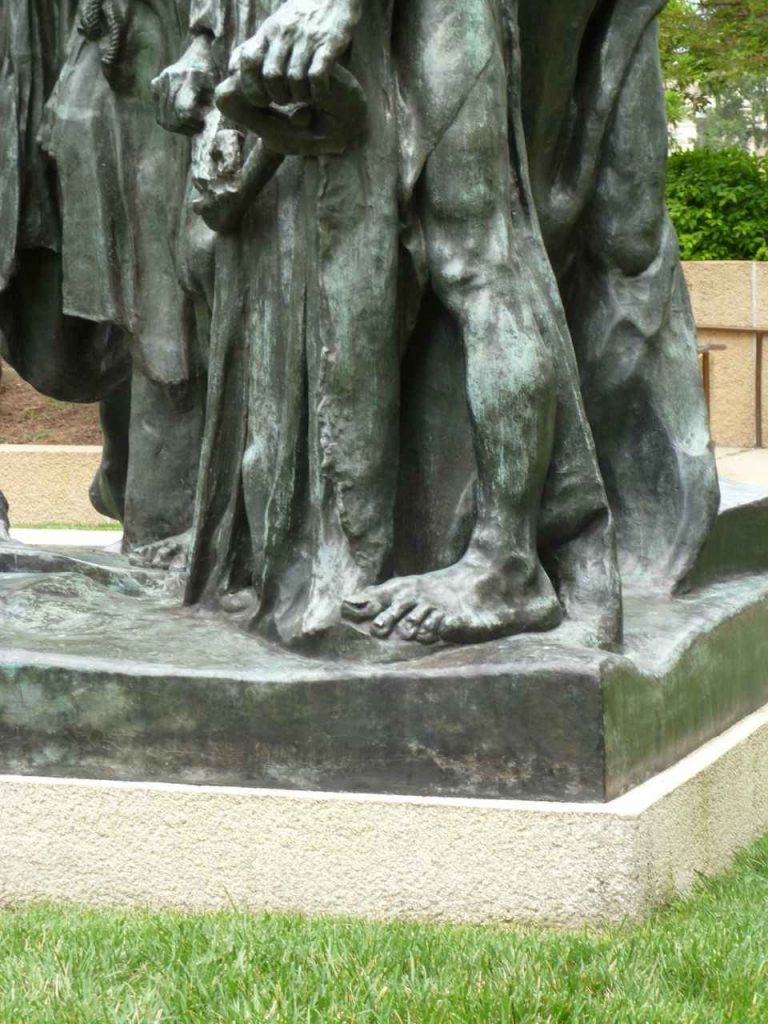 Turning his back on fellow captive, Andrieu d’Andres, distraught, in contortions of despair.  Reminiscent of a statue by Michelangelo, whom Rodin revered, in which inner emotions are expressed by the movements of the human body. 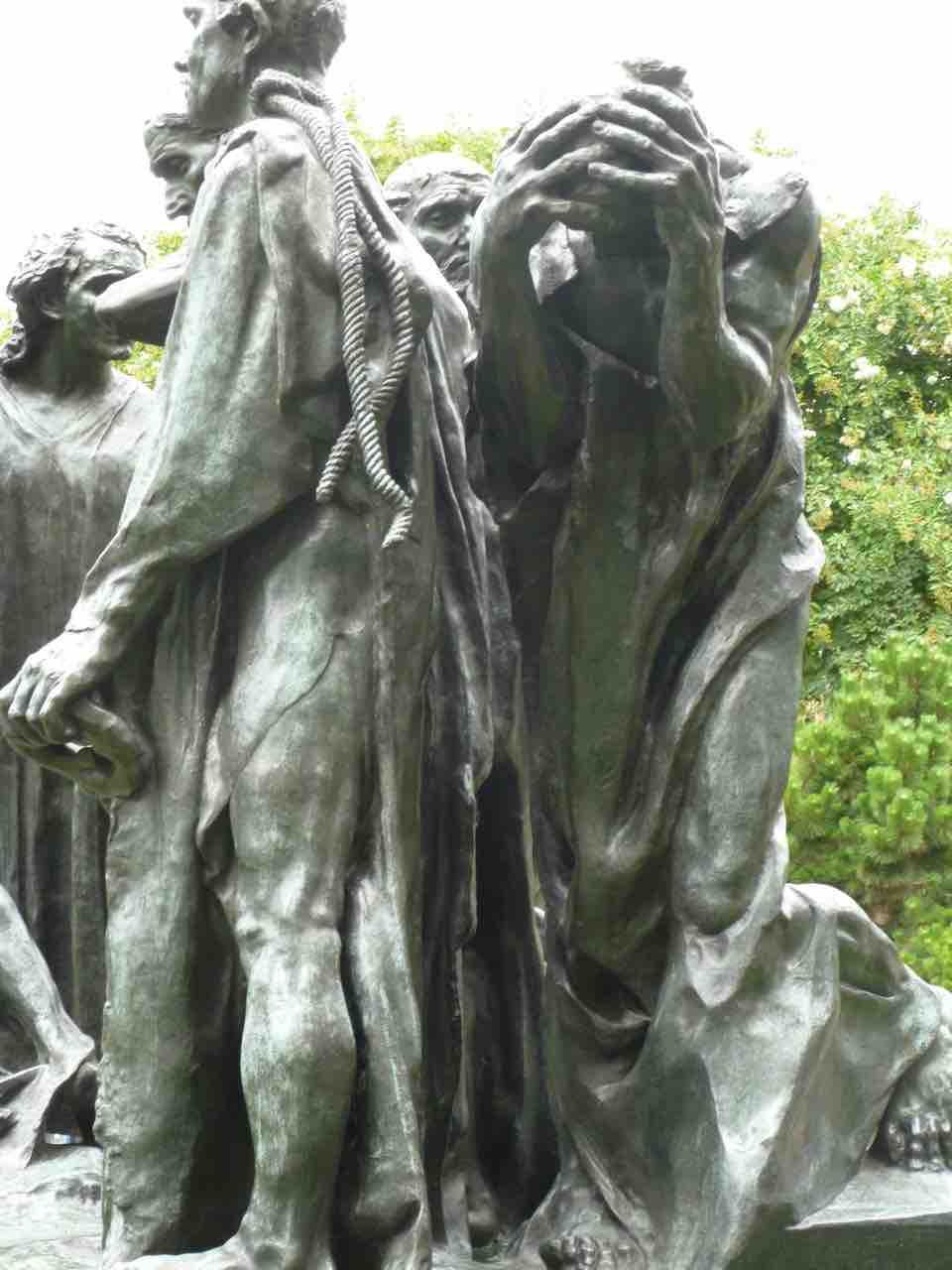 His head in his hands, overcome by both grief and fear, D’Andres  appears to be pulling himself downward into an inevitable descent. 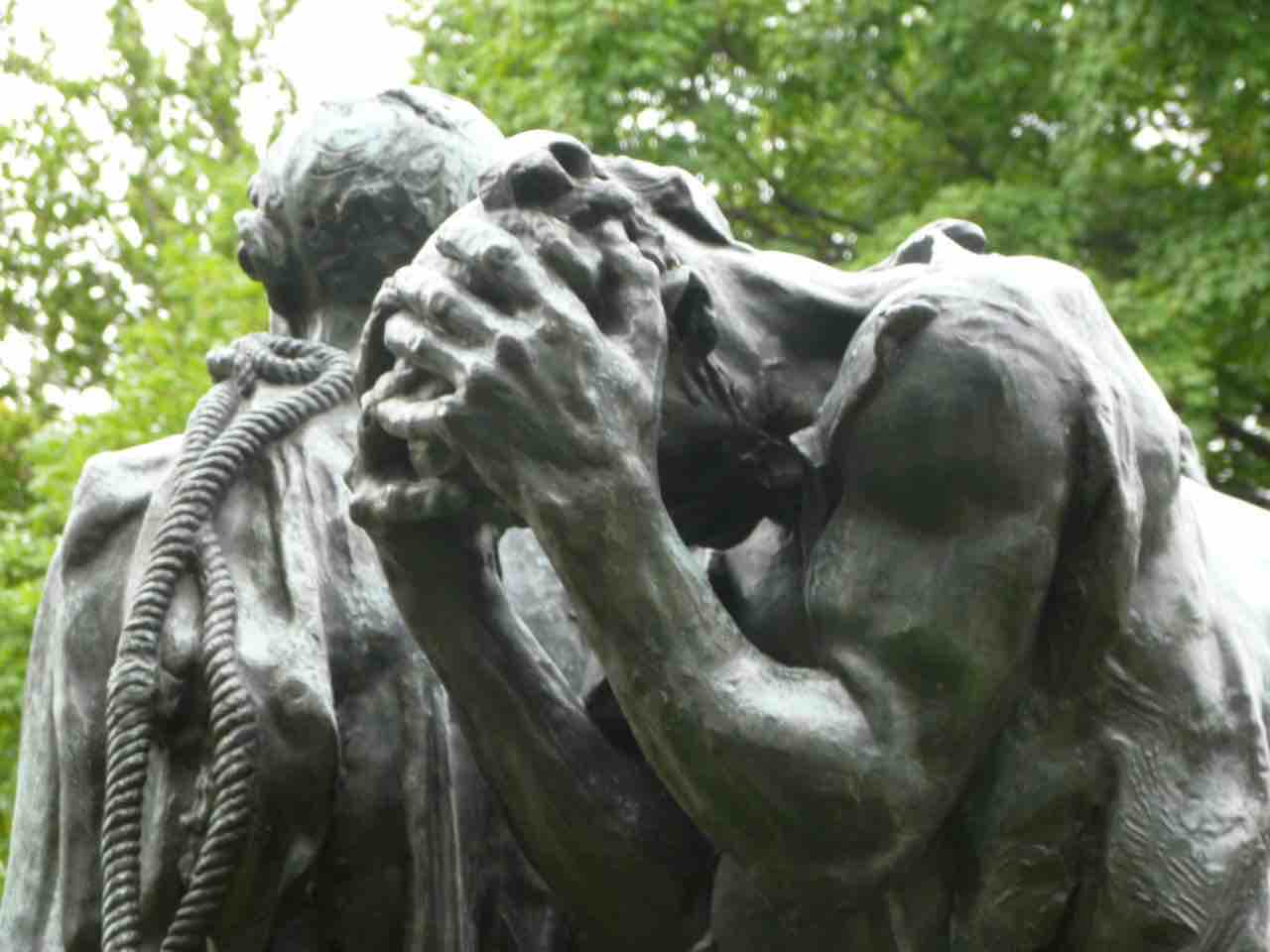 Until stopped by the support of his claw-like toes, just emerging from the intricate curves of the robe. 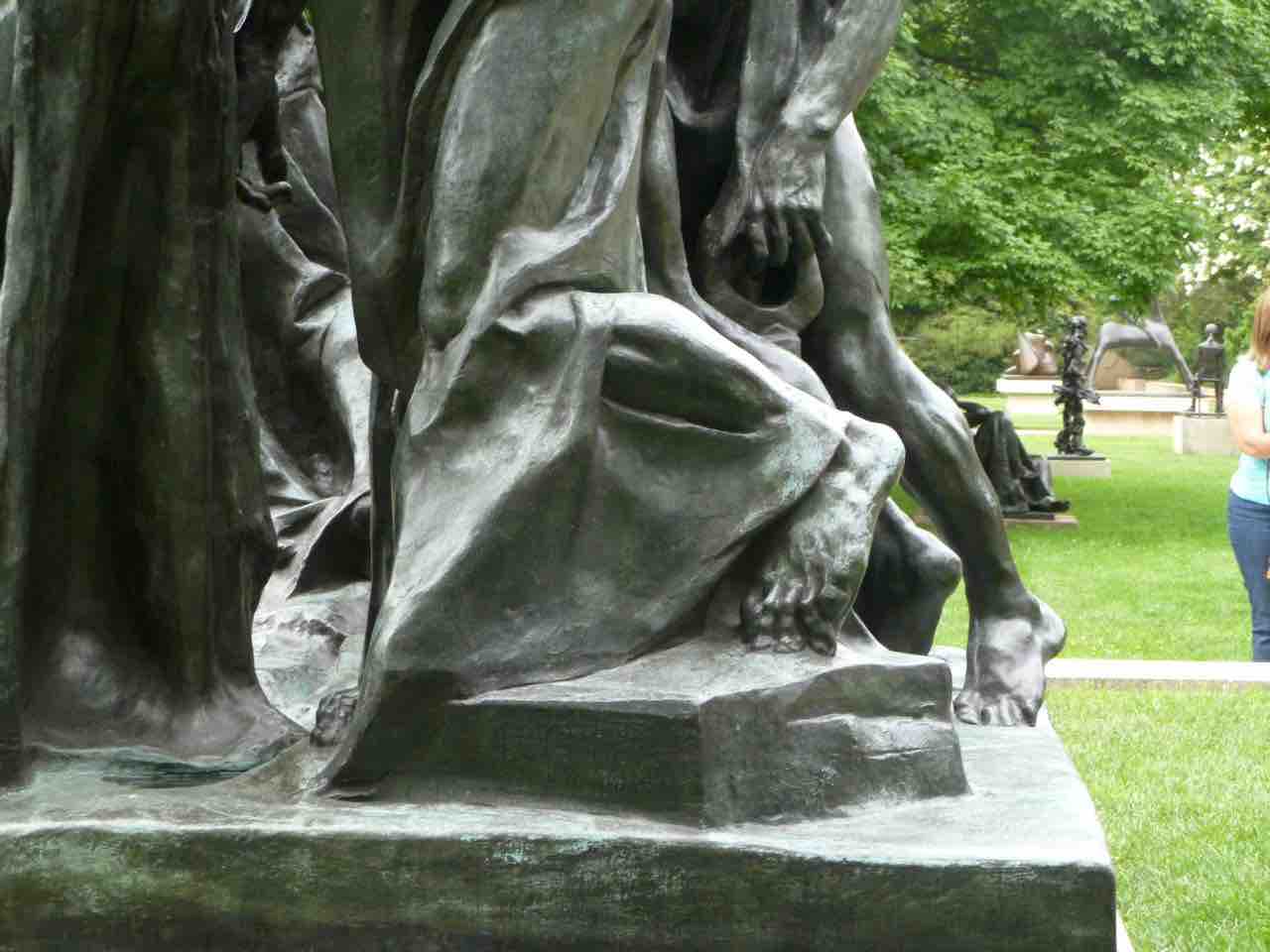 *The casts of The Burghers of Calais are from the original plaster of the work at the Musee Rodin in Paris.  To learn more about lost-wax casting which is the process Rodin utilized, click:

Among the resources for this blog: Auguste Rodin—The Burghers of Calais: A Resource for Educators, by the staff of the Metropolitan Museum of Art, New York, 2000.

And to deepen your understanding of the world around you see Through an Artist’s Eyes: Learning to Live Creatively!