Please double–click on the images to enlarge or enhance them.

Do You Understand Rodin?—The Enigma of Balzac

Auguste Rodin’s Balzac in the Hirshhorn Museum Sculpture Garden has always intrigued me. I’m still not quite certain how to react to this work of art which Rodin considered the result of my lifetime, the pivot of my aesthetic.  When I was recently taking photographs of The Burghers of Calais (see: September 22 and 23 blogs), I sometimes felt that the statue of Balzac was watching me from his pedestal across the lawn. As if challenging me to come over and  really try to appreciate and understand him. 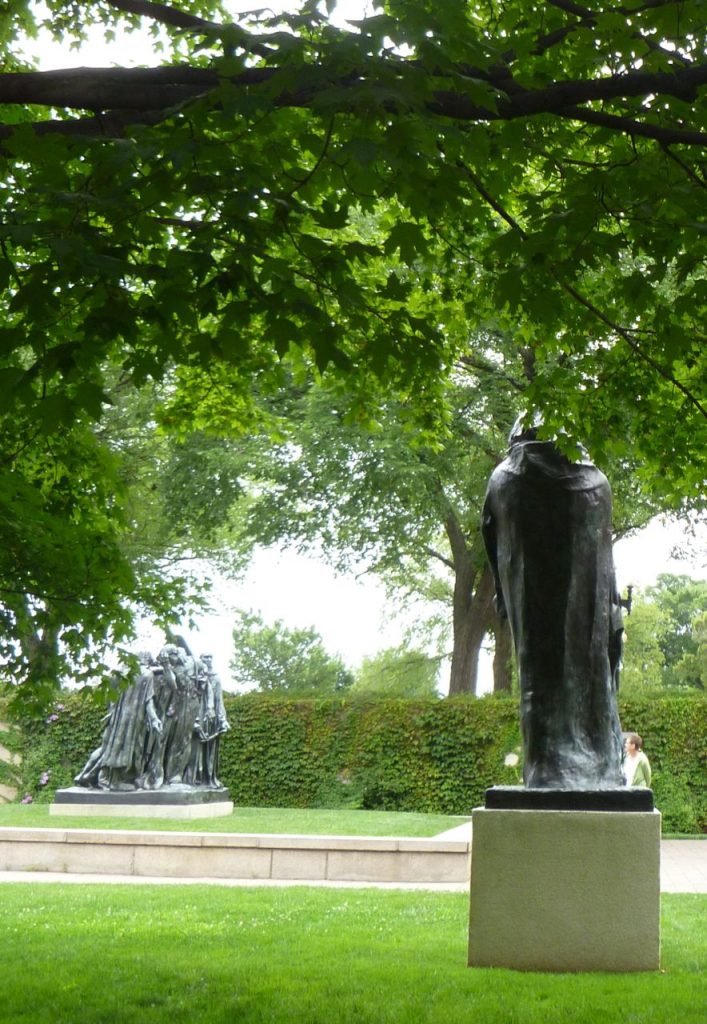 Balzac has always been controversial. When Rodin’s monument, to one of France’s most renowned writers, was shown at the 1898 Salon, it was mocked and disparaged—compared to a lump of plaster, a block of salt dissolving in the rain, and even a snowman in a bathrobe. Although Balzac did have his defenders, including Toulouse Lautrec, Monet, future French President Clemenceau, and composer Debussy.  They all signed a petition of support, after the Societe des Gens de Lettres, who originally commissioned the sculpture, rejected it.

What is your opinion?  Here are a few fast facts that will provide some background, followed by a selection of photo ops accompanied by quotes mainly of Rodin.

Never met Balzac who had died in 1850, but produced numerous nude studies as well as clothed in suit coat or robe. However, he did NOT intend the work to be a realistic portrait; instead approached as  a symbol of creative power.

Refused to sell, displaying Balzac on the grounds of his home near Paris; later publicized by hiring Edward Steichen to photograph the statue in 1908.

In a plaster state during Rodin’s lifetime; not cast in bronze until 1939, when placed on street in Montparnasse section of  Paris. Today some dozen statues of Balzac are in museum collections from New York to Australia to Venezuela.

Author of the La Comedie Humaine, a series of short stories and novels.

For me Balzac is above all a creator and that’s what I want to show.

There was only one way to evoke my subject.  I had to show Balzac in his study, breathless, hair in disorder, eyes lost in a dream, 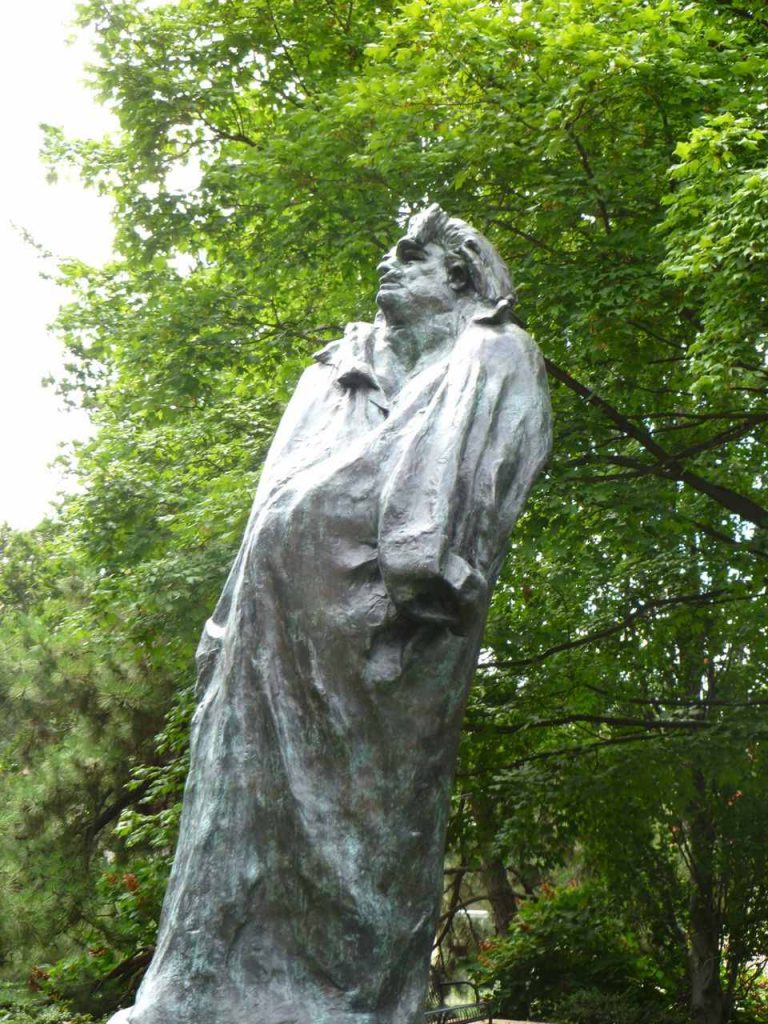 a genius who in his little room reconstructs a whole society piece by piece in order to bring it to tumultuous life, 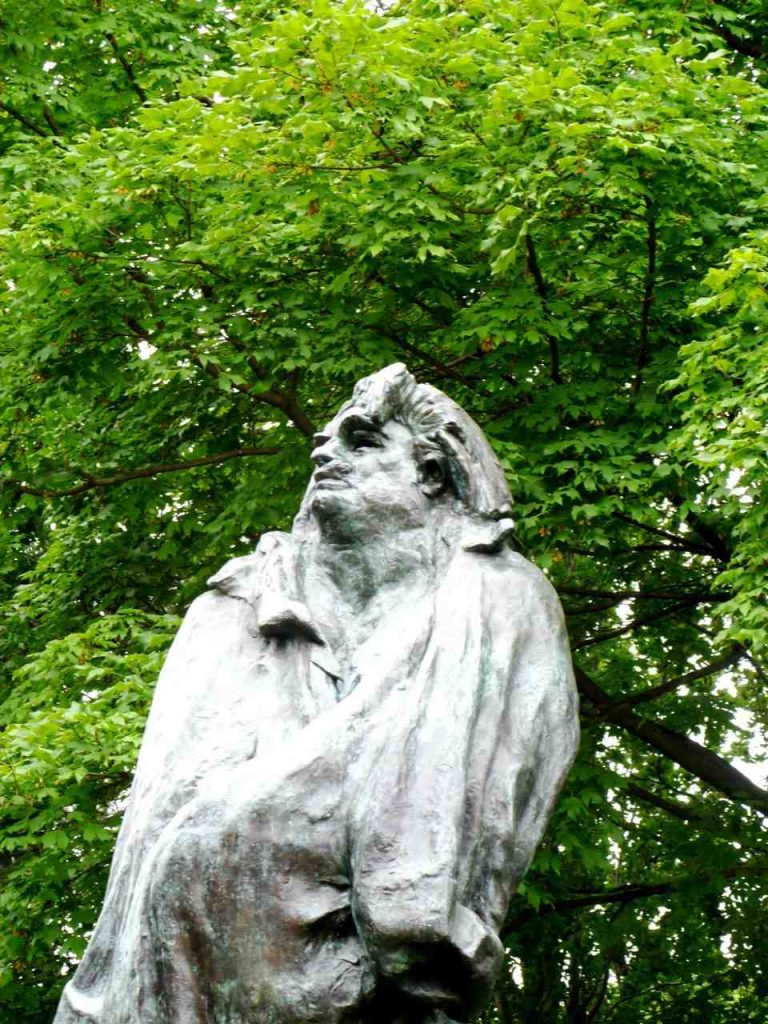 who never rests, turns night into day, drives himself vainly to fill the holes left by his debts…..

Rodin in a conversation with Paul Gsell 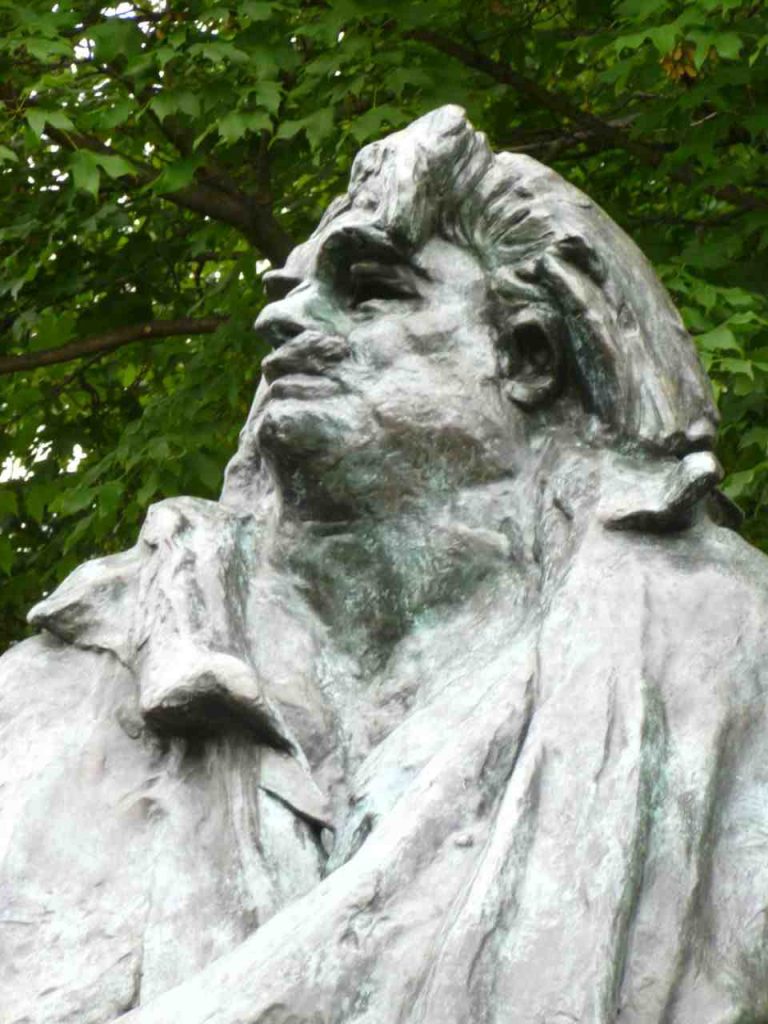 Profound pleasureless melancholy has come upon me.  The struggle I must carry on still wears me out…..What a sorry time we live in!  Some believe in progress because there are telephones, steamships, etc.; but all that is only an improvement of the arm, the leg, the eye, the ear.  Who shall improve the soul, which will soon disappear?

Rodin in a letter to friend William Ernest Henley 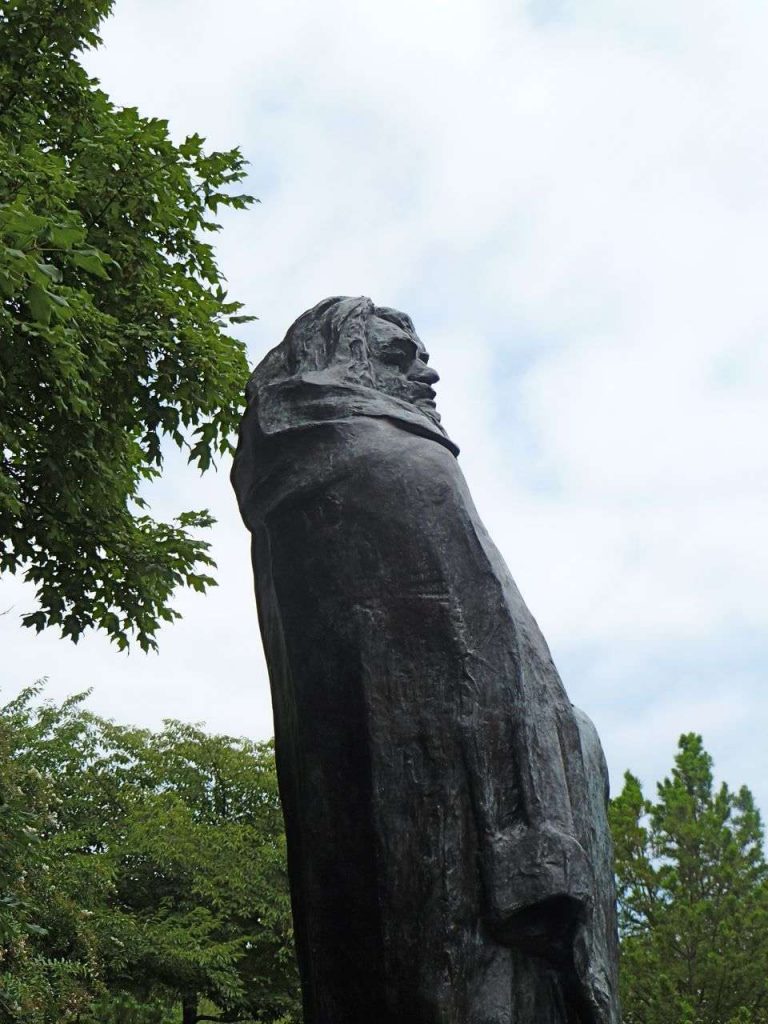 I am unfortunately a slow worker, being one of those artists in whose mind the conception of work slowly takes shape and slowly comes to maturity.  I lay my work aside while it is yet unfinished, and for months I may appear to abandon it.  Every now and then, however, I return to it and correct or add a detail here and there.  I have not really abandoned it, you see, only I am hard to satisfy.

Rodin in interview with a journalist 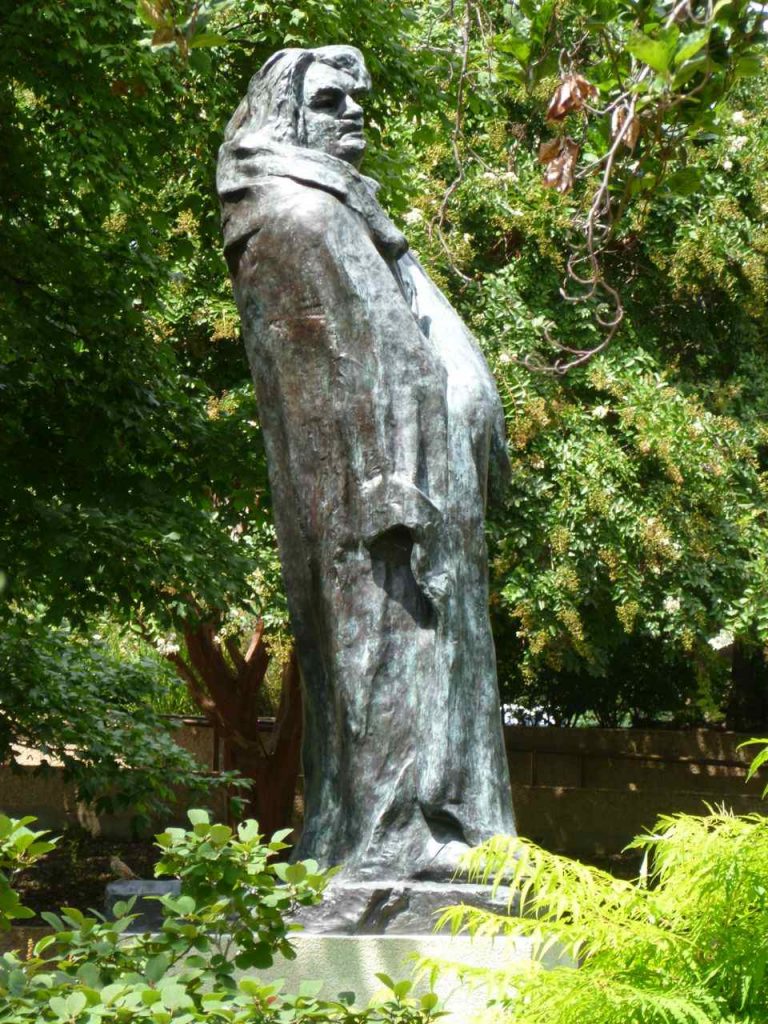 It is evident that M. Rodin wanted a decisive simplification.  He broke with the inane tradition that a statue should be a portrait, an exact effigy.  Geniuses are not so much men as monsters. 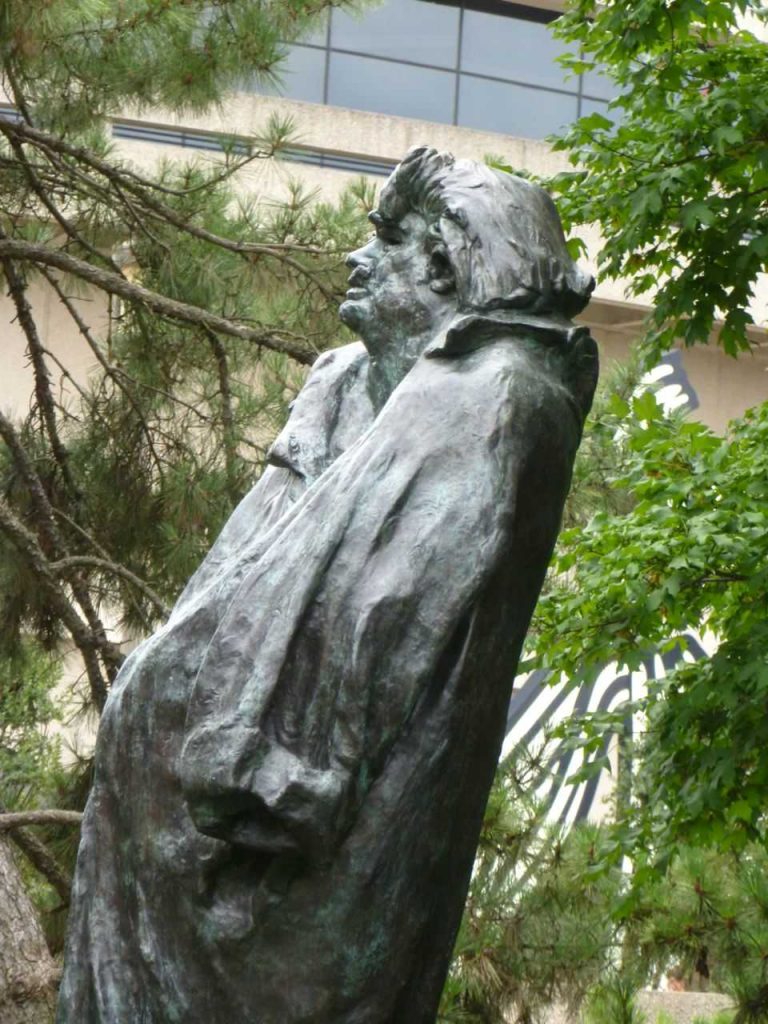 The Balzac statue is the logical development of my artistic career.  And my wish is to remain its sole owner. 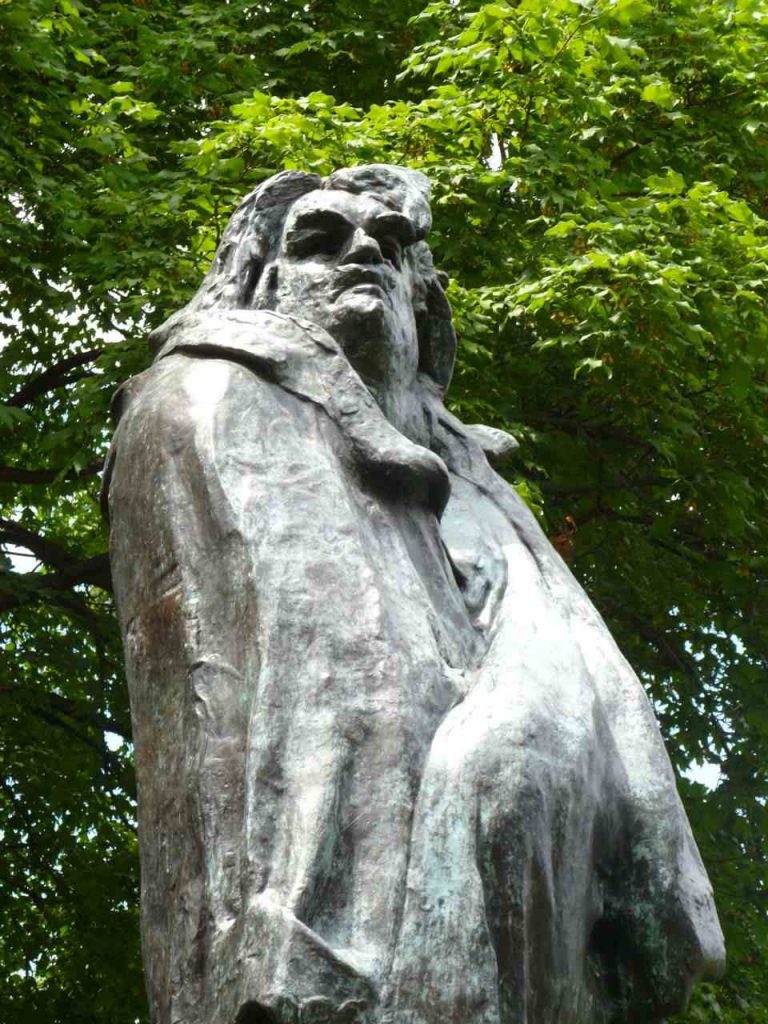 Your pictures will make the world understand my Balzac. 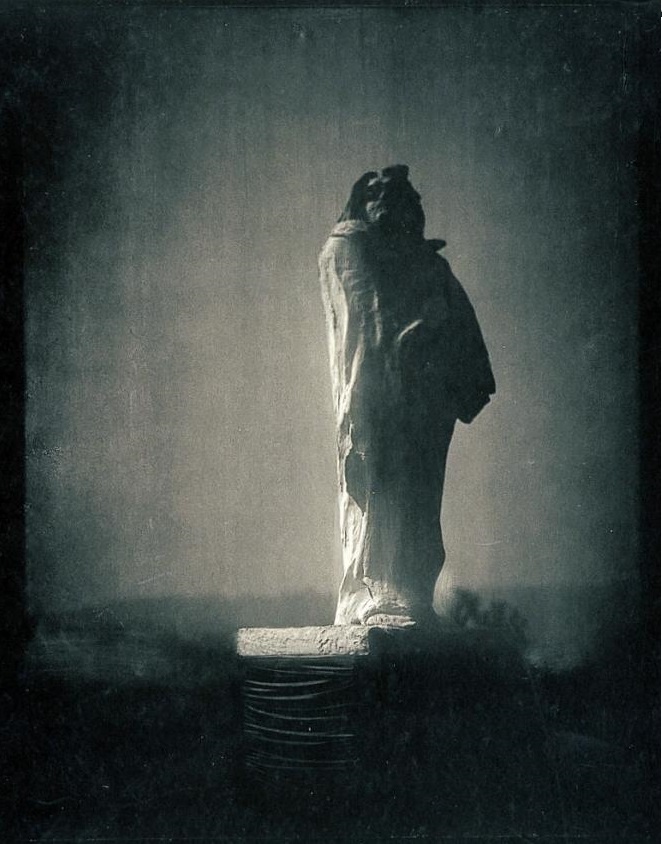 Among the resources for this blog are “Saga of a Statue: The Struggle of Rodin’s Balzac”, The New York Times, August 15, 1998 and Rodin Works: Monument to Balzac website.