I’m continuing with my blogs on Auguste Rodin’s The Burghers of Calais at the Hirshhorn Museum in Washington, D.C., now focusing on the final three of the six hostages (see: Monday, September 22 for the first part).

Rodin had no idea of the actual appearance of these 14th century men, who offered their lives to save the people of Calais from the forces of the British monarch Edward III during the One Hundred Years War.  According to the account of contemporary Jean Froissart, they were the wealthiest citizens of the city and like their leader Eustache de Saint-Pierre (the gaunt, bearded individual in the frontal view below), each one had replaced his usual fine clothing with plain garments as a symbol of humility.

Rodin had his son, artist Charles Cazin, and an Italian peasant pose for the burghers.  Overall, though, their features and physiques do not reflect any specific model.  The Calais town council, who commissioned the work, apparently questioned the sculptor’s interpretation expecting their ancestors to project a  more heroic and imposing presence.

However, Rodin’s goal was to depict the complexity and depth of his subjects’ reactions, embarking from the besieged city toward the enemy camp, as he described,

…..still questioning themselves to know if they have the strength to accomplish the supreme sacrifice—their soul pushes them onward, but their feet refuse to walk.  They drag themselves along painfully, as much because of the feebleness to which famine has reduced them as because of the terrifying nature of the sacrifice……. 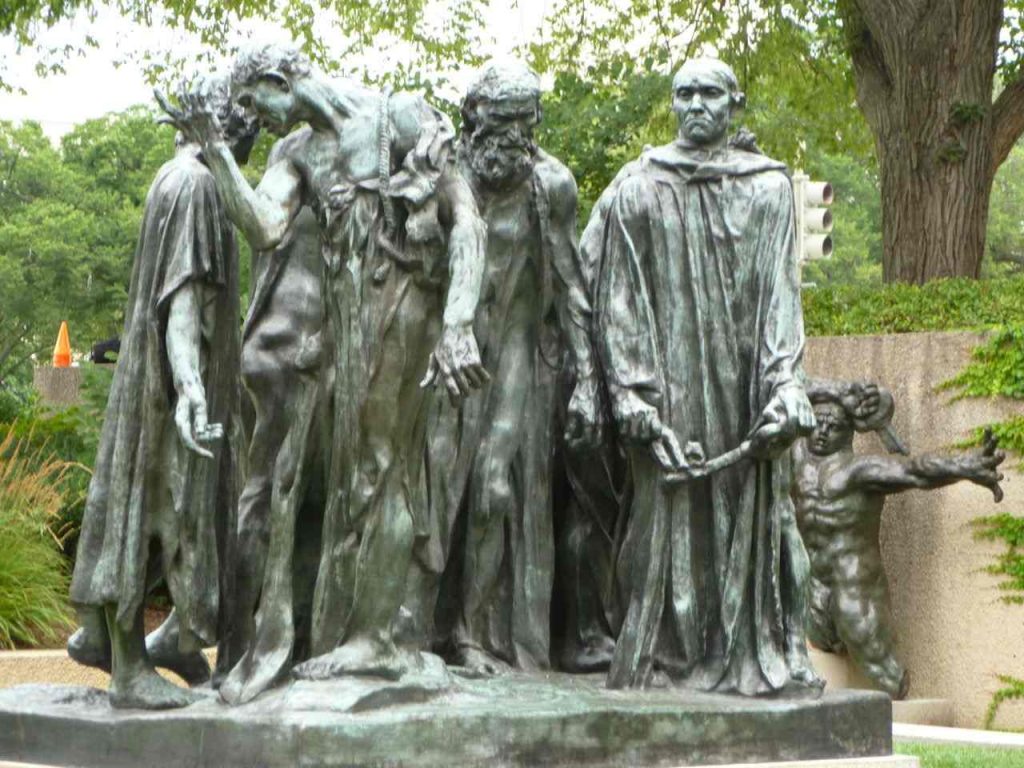 For instance, Jacques Wiessant (occupying the middle of the Hirshhorn statue as seen below) shifts awkwardly to this right, hesitating to take the next step.

The Burghers of Calais, back view, photograph, Joan Hart

He may be more controlled than his hysterical companion Andrieu d’Andres ahead of him, 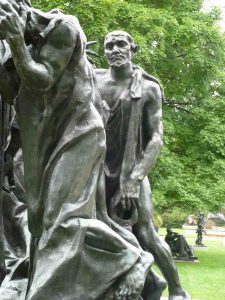 but a combination of anguish and remorse have overtaken Wiessant, slowing his progress.  Or is he simply disoriented, aimlessly gesturing into the air? 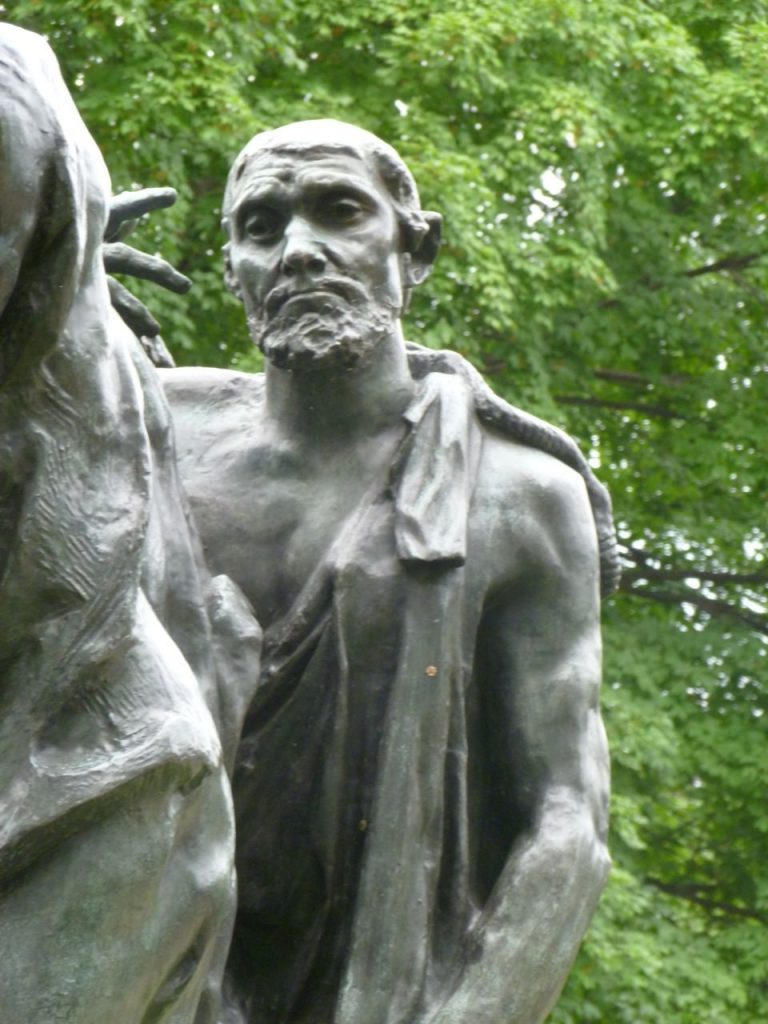 Then again, could he be motioning to Jean de Fiennes just behind him, the youngest participant of this ordeal? 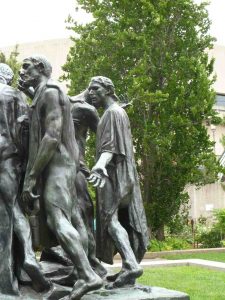 Or is Jacques Wiessant oblivious, engrossed in his own suffering, while Fiennes, positioned on the platform’s edge, remains alone, without comfort, 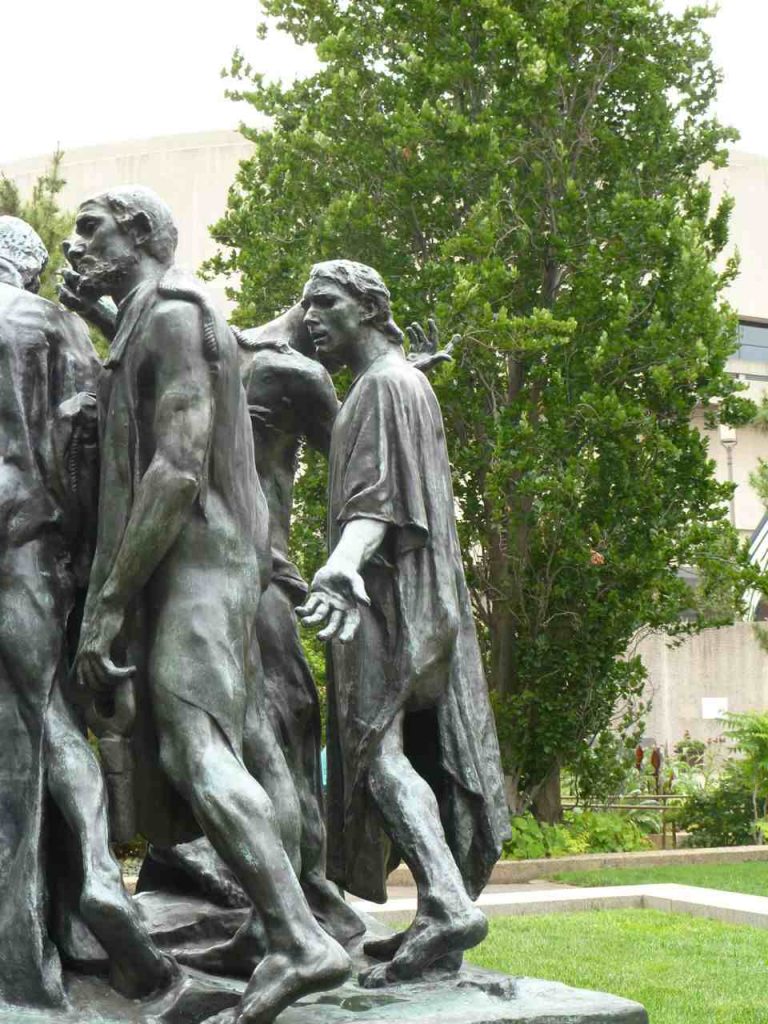 and pleading for an answer to why he must die. 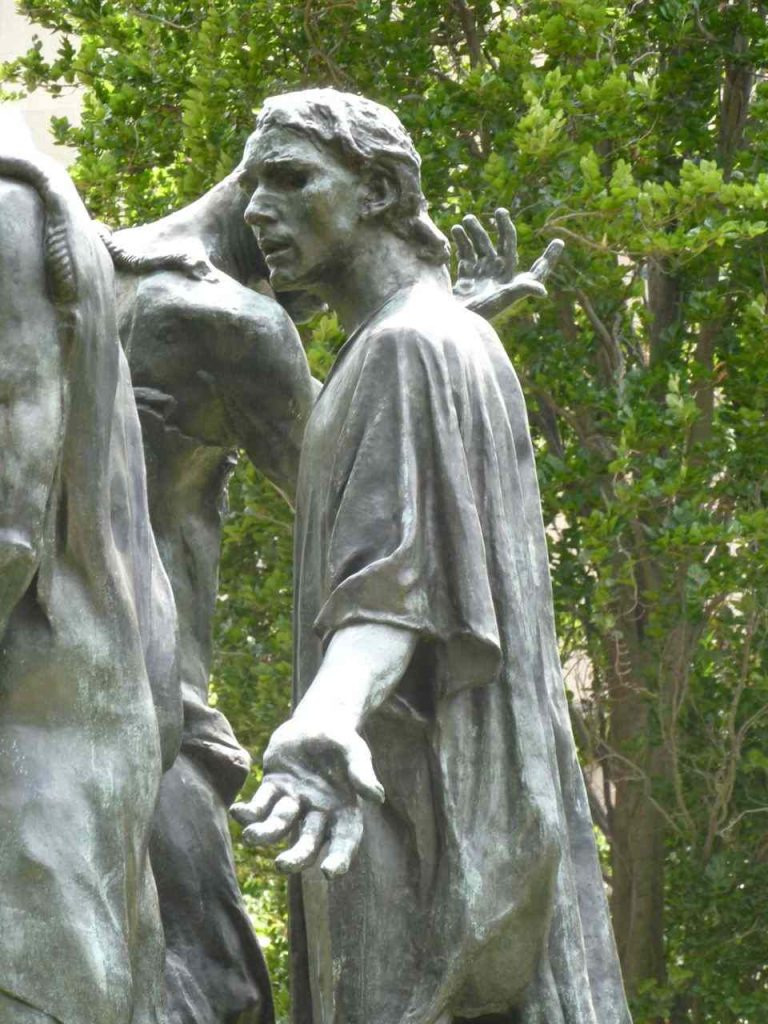 His oversized hands extending hopelessly toward the ground, while beside him, Pierre Wiessant, Jacques’ brother, reaches upward in a counterpoint of movement.  As if  they are two dancers, engaged in a sorrowful pas de deux.

For Pierre is the most graceful of the martyrs, despite his emaciated body with its skeletal arms and neck.

Strangely elegant as he bends forward, perhaps like a saint In the act of benediction.

(Note: the pigeon at sculpture’s base.)

The resources utilized for this blog include Auguste Rodin—The Burghers of Calais: A Resource for Educators by the staff of the Metropolitan Museum of Art, New York, 2000.