RENOIR, A WOMAN & A BOUQUET OF FLOWERS

Last Friday, I spent the entire day at the Barnes Foundation museum in Philadelphia, surrounded by some 181 incredible Renoirs, mainly of the artist’s favorite themes or as the French would say, les femmes and les fleurs. So, when I returned, I searched my Impressionist books and the internet so I could arrange my own virtual show, Renoir, A Woman & A Bouquet of Flowers.  Yet, which should I choose? For as expressed by Renoir’s The Ingenue below, it will require some thought….. 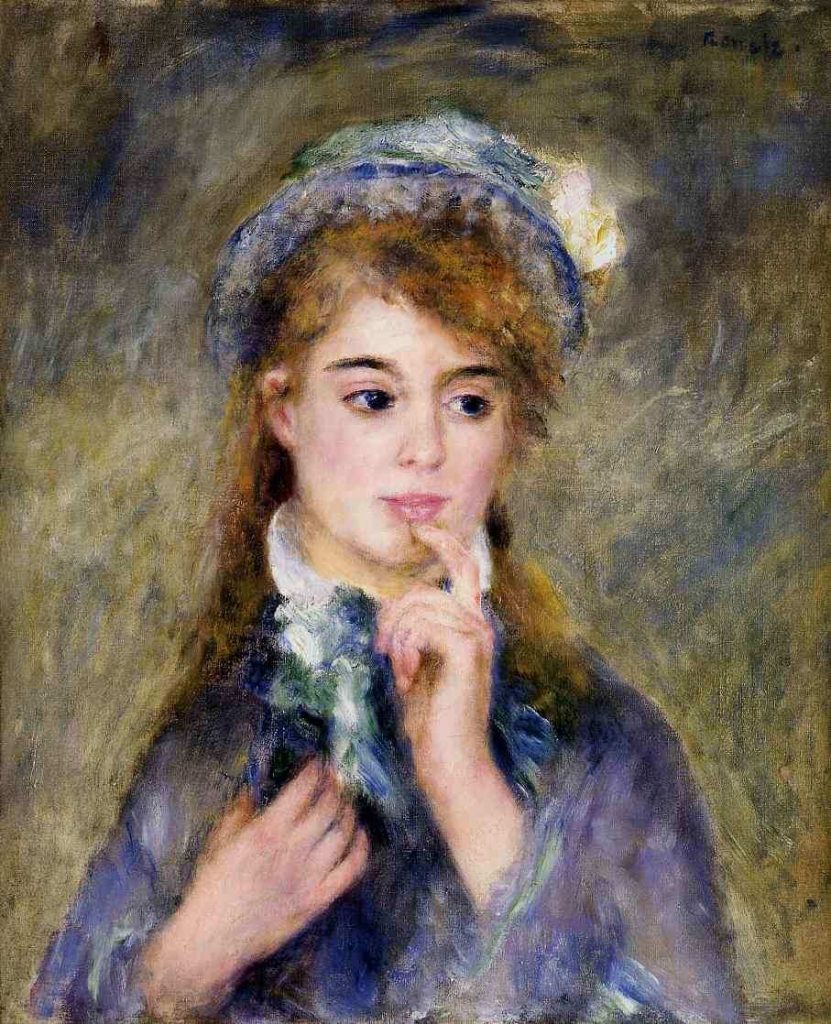 I’ll start with Spring Bouquet of 1866, an overflowing assortment of blossoms, ranging from lilacs to wildflowers. Typical of the then more realistic, detailed style of 25 year old Renoir.

Contrasting to his free but controlled brushstrokes, vibrant in color, of Roses in a Blue Vase, another addition to my exhibition, done about a quarter of a century later. 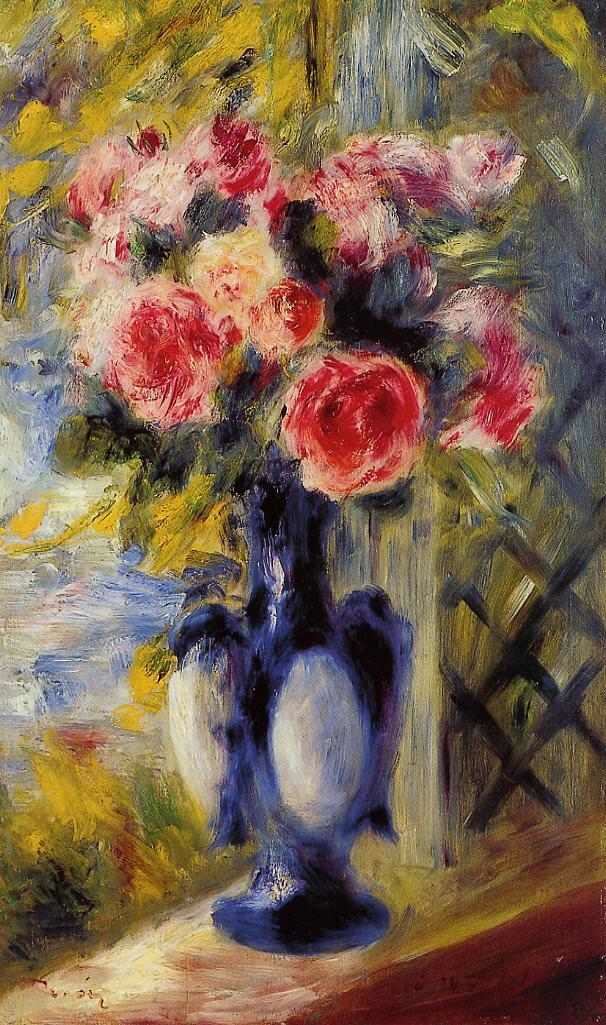 Or how about the glamorous Madame Henriot, a Renoir heartbreaker, enticing her male fans with a silk, revealing bodice enhanced with delicate floral buds.

Hanging adjacent to the industrious seamstress of Young Woman Sewing, who shared the same profession as Renoir’s own mother. The artist perhaps recalling his childhood past, enlivened by an explosion of rainbow hues in the vase nearby. 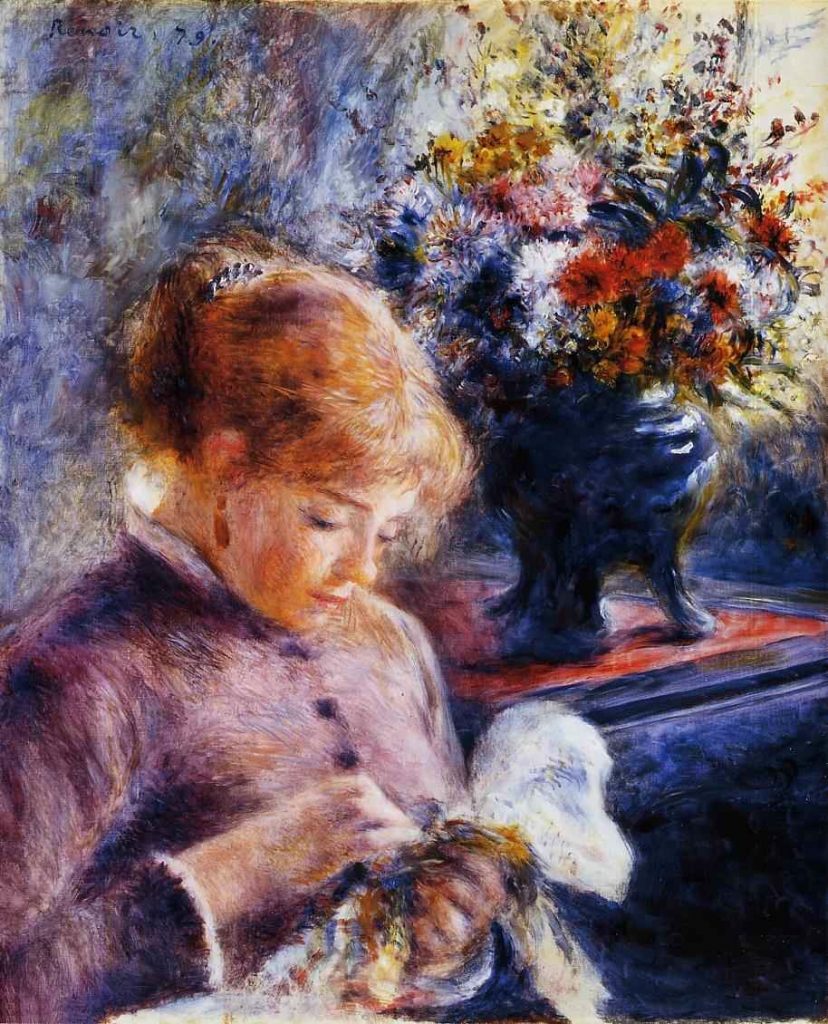 While in Young Girl Holding a Bouquet of Tulips, the flowers themselves seem secondary, held almost nonchalantly in her hands. Her face, too, is partially concealed, though can any viewer not be intrigued by her feathery, if rather unusual, hat? 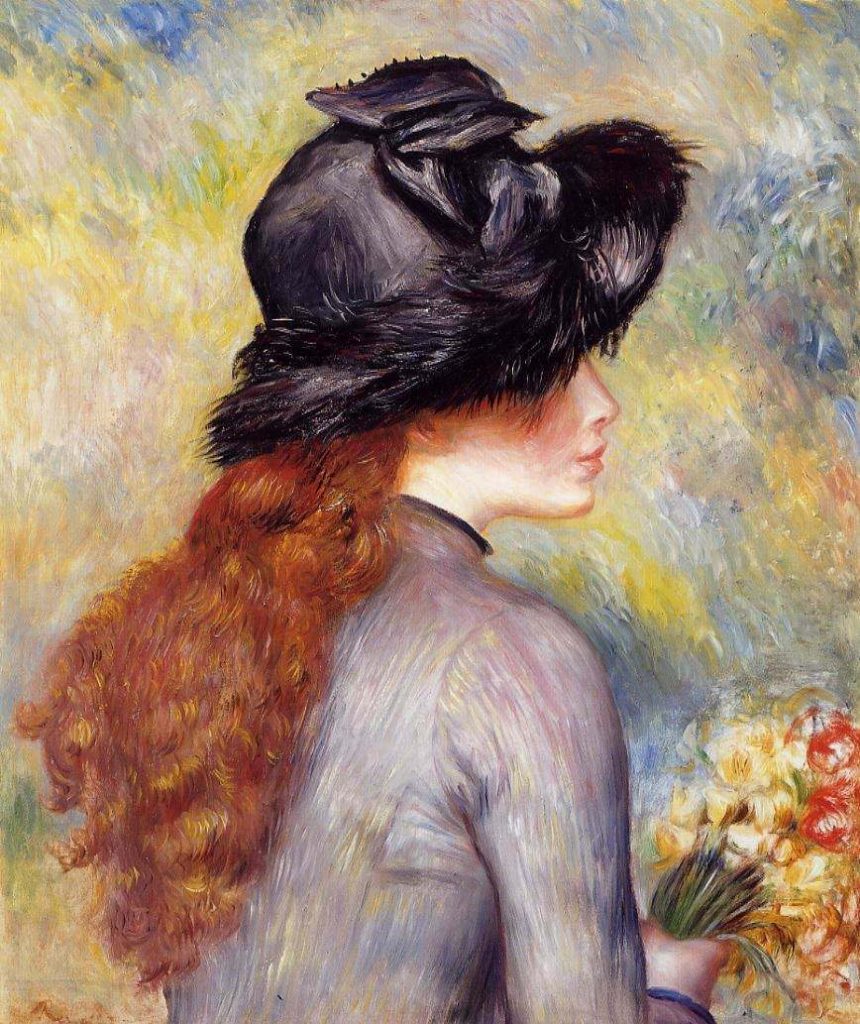 Next, Portrait of Madeleine Adam is a riveting portrayal that stands on its own without the need of a bouquet or any other decoration.  Young, confident, and direct in her attitude, and unlike many of Renoir’s female subjects, she challenges us with her intelligence and curiosity about life. 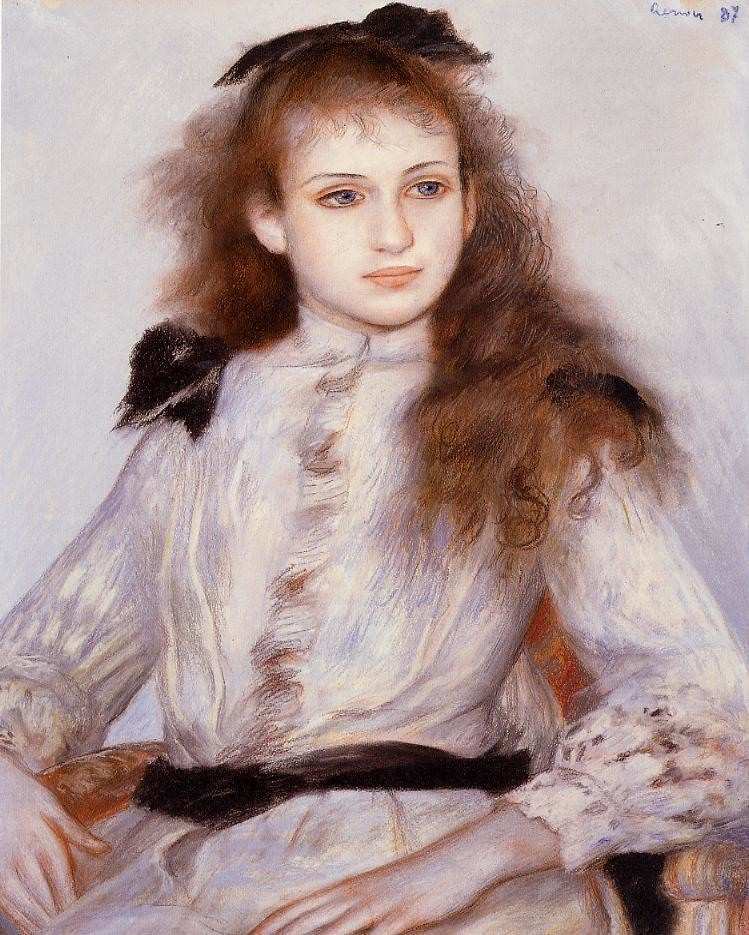 Flowers in a Vase also has a distinctive presence, stately and contained in spite of the rich complexity of its arrangement. Although aren’t the yellow blooms in front, about ready to escape? 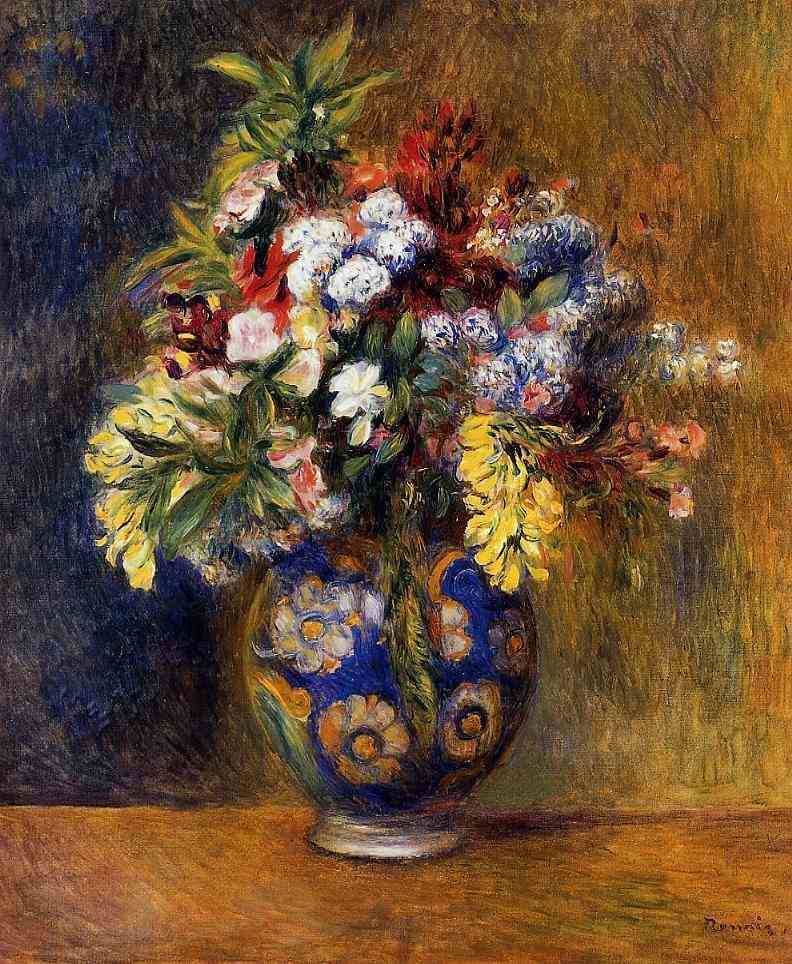 However, to Renoir the rose was supreme like actress and possible lover, Jeanne Samary below, whom in the artist’s words, radiated light around her.

The jewel of the garden, intricately designed by nature as well as carefully cultivated by man, that symbolizes the depth of Renoir’s emotions. Whether depicted alone, 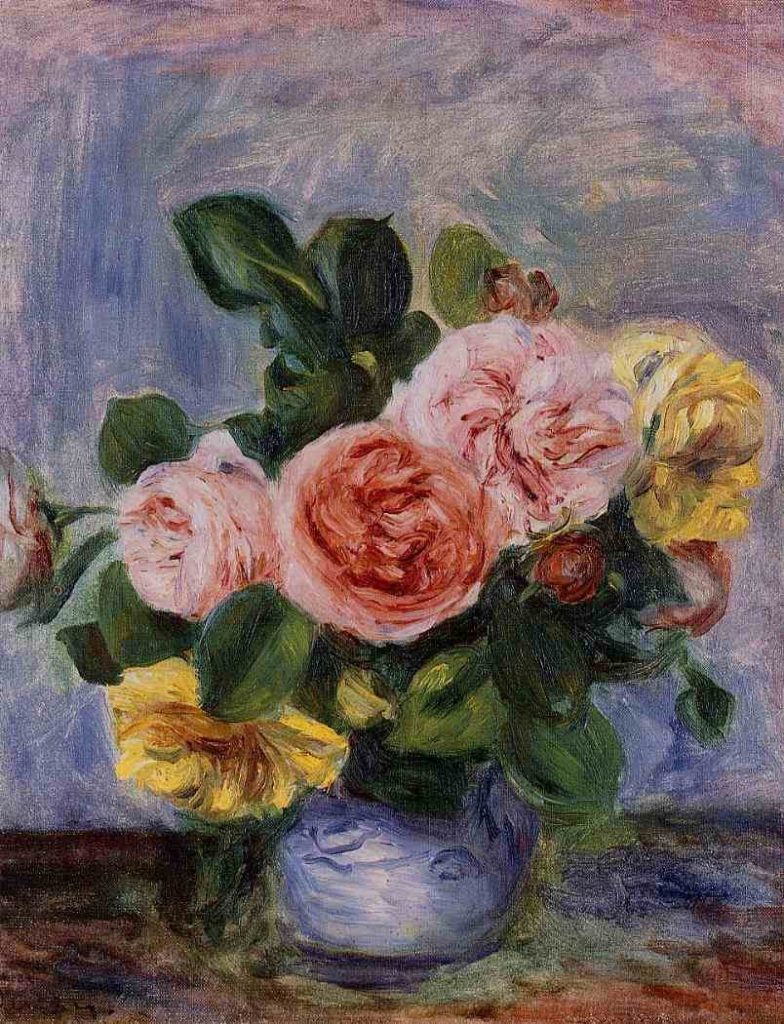 or as an accessory, to enhance the loveliness of Gabrielle with a Rose, the family governess of his children and frequent model for some two decades.

The quotes of Pierre-Auguste Renoir (1841-1919) and his son cinema director Jean Renoir (1894-1979) are from Renoir, My Father by Jean Renoir, translated by Randolph and Dorothy Weaver, Little, Brown and Company, Boston, Massachusetts, 1962.

And a great pathway to expanding your world during the upcoming holiday is Through an Artist’s Eyes: Learning to Live Creatively!

AVAILABLE VIA AMAZON & PAY PAL
A GREAT GIFT TOO