Click on the works of art to ENLARGE and ENHANCE them.

Originally published in August, 2014.  I am republishing for my current Modern and Contemporary Art class.

THE REAL GAUGUIN: FACT VS. FICTION

On April 1, 1891, Paul Gauguin embarks from Marseilles for the then French colony of Tahiti, resolved to establish a “Studio of the Tropics.”  The South Pacific island, though, had not necessarily been his first choice; he had weighed other destinations such as Java (part of modern Indonesia), Tonkin (today Vietnam), and Madagascar in the months leading up to his departure.  For 10 weeks, he slowly made his way to a land in his words of ecstasy, calm, and art,* stopping in the Middle East area, Australia, and New Caledonia.

However, when he reaches the capital city of Papeete on June 9, 1891, his dream is shattered. After decades of French colonial rule, as Gauguin later remembered in his book Noa Noa,

Tahiti was Europe—the Europe I had thought to shake off—and that under the aggravating circumstances of colonial snobbism, and the imitation, grotesque even to the point of caricature, of our customs, fashions, vices, and absurdities of civilization.

In Gauguin’s colorful The Siesta, done probably in 1891 or 1892, the Tahitian women gathered on the veranda of a native house, have already adopted European attire, ranging from the prim high necked missionary dresses to more feminine blouses. Yet, the dark blue and white patterned Tahitian pareus still prevail, remnants of the pre-European customs. 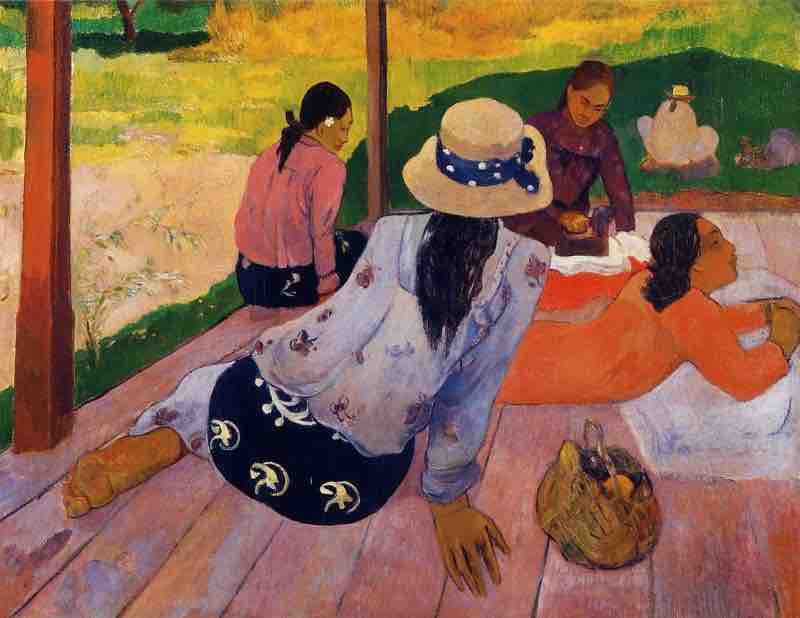 Gauguin soon escapes from the poverty and congestion of Papeete, moving to Mataiea, about 40 miles south in the countryside.  He begins to create his own painted visions like Tahitian Pastoral below.  In Noa, Noa, Gauguin describes one of the sources of his artistic inspiration—a flute sounding in the middle of a tropical night.

One has said that that it is like a musical instrument, the pipe of the ancients, which the Tahitians call vivo.  But this is an instrument that is silent during all the day: at night, in memory and thanks to the moon, it repeats the beloved airs.  I fell asleep to the music. 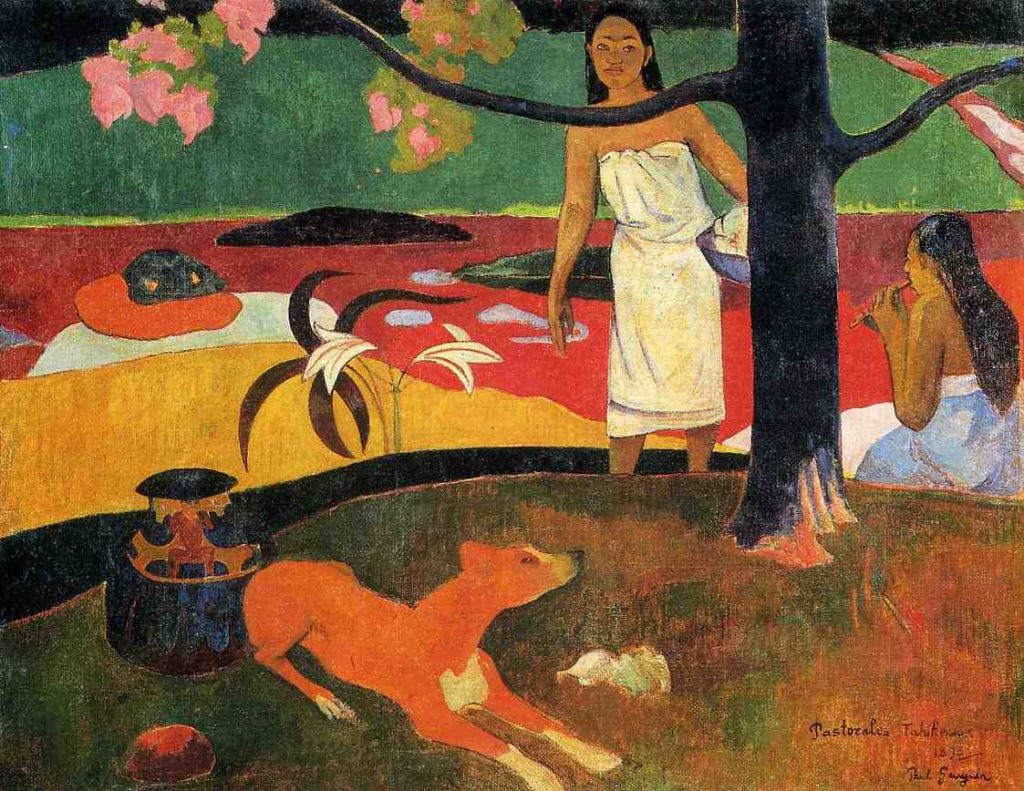 FAST FACT #3—THE MYSTERY OF TEHAMANA

I was reassured when I saw in the face of the young girl, in her gestures and attitude the distinct signs of independence and pride which are so characteristic of her race.  And my faith was complete and unshakable when, after a deep study of her, I saw unmistakably the serene expression which in young beings always accompanies an honorable and laudable act.  But the mocking line about her otherwise pretty, sensual, and tender mouth warned me that the real danger of the adventure would be for me, not her….

According to the above excerpt from Noa, Noa, Gauguin’s account of his experiences in Tahiti, 13 year old Tehamana or Tehura becomes his wife, given to him by her father (with the daughter’s agreement).

So did the Tehamana of Noa Noa truly exist?  Or was she just a local model whose name the artist borrowed for his fantasy character?  Several works done in 1891 and 1892 have been linked to her: Woman with a Mango (in which she might be pregnant with Gauguin’s baby), Spirits of the Dead, and Tehamana Has Many Parents, perhaps his last portrait of his supposed teenage spouse. Although wearing what was called a  “Mother Hubbard,” reflecting the standards of Christian morality, the Tahitian girl is surrounded by religious and cultural symbols. For example, the regal fan she holds could represent her descendance from the ancient gods, the mangoes the fertility of her people, and the exotic idol nearby might be Hina, the moon goddess worshipped by her ancestors.

But what is the origin of that indecipherable script on the wall? Art historians have generally agreed Gauguin could be referring to tablets from Easter Island which he might have seen at a Parisian world’s fair in 1889.  Yet, works like Tehamana Has Many Parents continue to mystify us in the 21st century, a result of Gauguin’s fascination with non-Western civilizations. 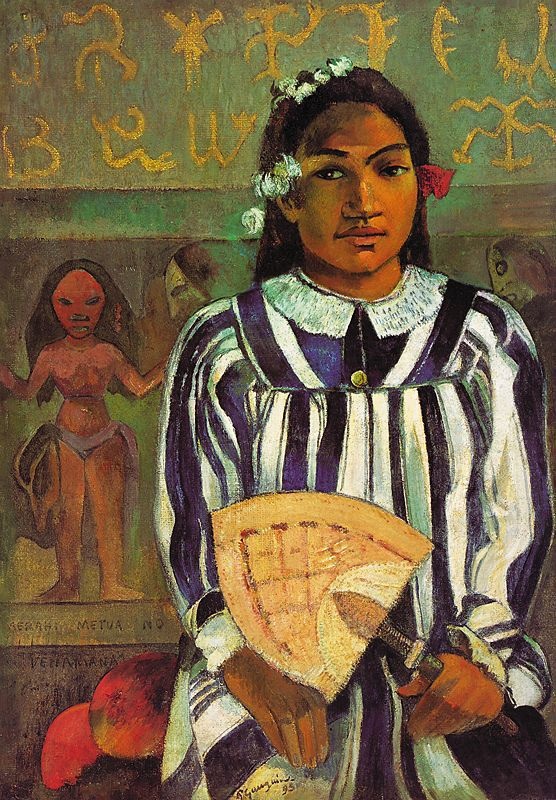 Paul Gauguin, Tehamana Has Many Parents, 1893, oil on painting, The Art Institute of Chicago, Chicago, Illinois

*Letter to his wife Mette.