Have you ever looked at a painting and been surprised by its artist?  “Is that really a Monet?,” you might say to yourself.  “Or I can’t believe that is a Van Gogh!”  Even if you haven’t had that experience, I have tried to find 5 works of art that I HOPE might prove a bit difficult to identify, accompanied by a quiz.  (Next week, though, will be test-free with a new blog on Monet: Paradise Lost).

So we’ll be creating our own exhibition, NAME THAT ARTIST: CHALLENGING YOUR ART IQ! Could be a fun idea for an art museum near you. But don’t get discouraged if you miss some answers, which you’ll find in the second section of the blog, along with explanations. You’ll also notice many of your choices are Impressionists.

1. A. Edouard Manet  B. Mary Cassatt  C. Pierre-Auguste Renoir D. None of these artists 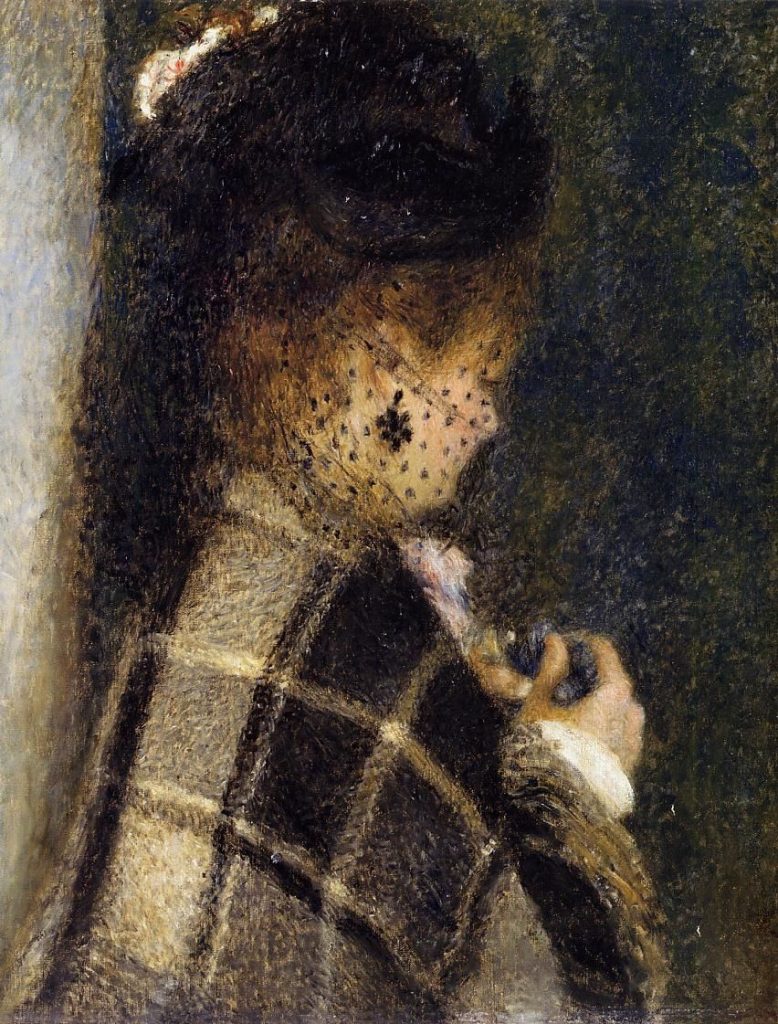 BACK AT THE STABLE

2. A. Edwin Henry Landseer  B. Henri Toulouse-Lautrec  C. Edgar Degas  D. None of the artists listed 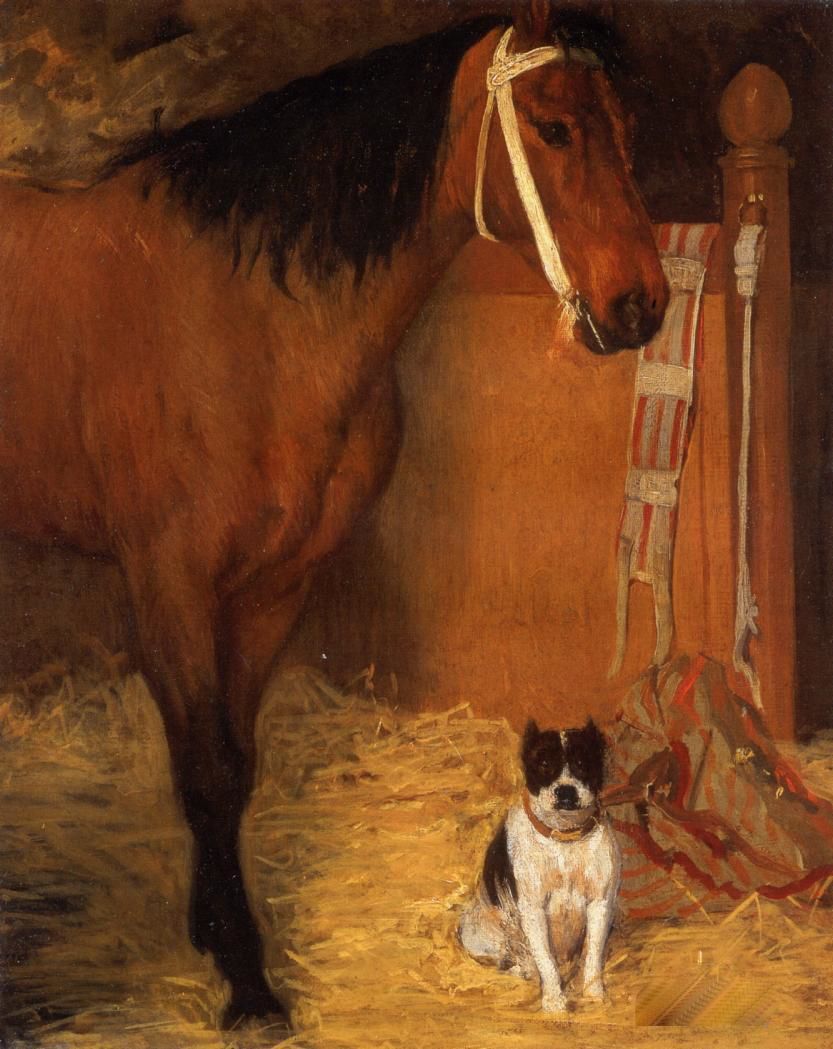 3. A.  Mary Cassatt  B. Pierre-Auguste Renoir  C. Berthe Morisot  D. None of the artists listed

A WALK IN THE SUN

4. A.  Claude Monet  B.  Jean Olivier  C. Pierre-Auguste Renoir D. None of the artists listed

THROUGH A CHILD’S EYES

5. A. Claude Monet  B.  Berthe Morisot  C. Pierre-Auguste Renoir  D. None of the artists listed

Pierre-Auguste Renoir (1841-1919) created this haunting painting during the peak of the Impressionist period, when hats were works of art too.

Edouard Manet (1832-1883) and Mary Cassatt (1844-1926) couldn’t resist the veil effect as well. Manet’s A Veiled Young Woman (on the left) is actually a portrait of colleague Berthe Morisot, while the model of Cassatt’s Woman Arranging Her Veil (on the right) is unknown. (See: end of blog for full credits.) 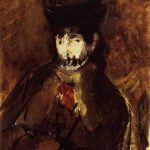 Next to ballerinas, Edgar Degas (1834-1917) was probably most fascinated by the beauty and speed of horses, especially at the races. Although this early interpretation, done in a realistic style, takes us behind the scenes at the local track.

British master Sir Edwin Henry Landseer (1802-1873) may not be as well known as Degas today, but in nineteenth century England works like Shoeing (on the left) were favorites with Queen Victoria and her people. In Artilleryman Saddling His Horse (on the right),  teenager Henri Toulouse-Lautrec (1864-1901) demonstrates both his knowledge and understanding of animals learned while growing up on his nobleman father’s estate. (See: end of blog for full credits.) 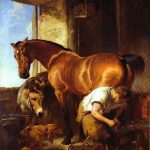 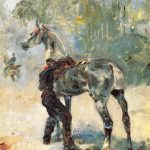 3A.  Mary Cassatt, Lilacs in a Window, 1880, detail, oil on canvas, Private Collection.

Mary Cassatt, is unrivaled for her lifelike portrayals of children, as they interact and bond with their mothers. Yet this rare still life of flowers by Cassatt overflows with vibrant color and light.

Unlike fellow Impressionist Cassatt, Berthe Morisot (Dahlias on the left) and Pierre-Auguste Renoir (Chrysanthemums on the right) have left us a legacy of several unforgettable bouquets. (See; end of blog for full credits.) 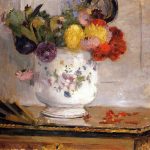 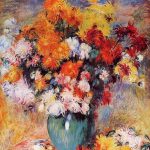 American artist John Singer Sargent (1856-1925) was one of the most successful portraitists of his time, with a clientele that ranged from the British aristocracy to U.S. presidents to the super-wealthy. However, he also was a friend and admirer of Claude Monet (1840-1926), producing his own Impressionist visions.

Monet’s Woman with a Parasol—Madame Monet and Her Son (on the right), along with Renoir’s Woman Gathering Flowers (on the left), precede Sargent’s work by more than a decade and were initially shown at Impressionist exhibitions in the 1870s and 1880s.  Jean Olivier does not exist. (See: end of blog for full credits.) 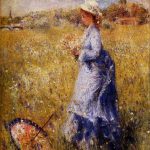 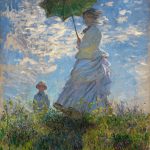 Michel, the painter’s youngest child, was about 2 when Monet sketched him in oil.  Landscapes mainly preoccupied Monet during his career, but he found time to capture this likeness of Michel and also created portraits of Jean, his eldest son, and several of his 6 stepchildren.

Morisot (1841-1895) and Renoir have immortalized their families in numerous works. Morisot, for instance, often portrayed her daughter Julie both alone and with her father in Eugene Manet and His Daughter at Bougival (on the left).  While Renoir constantly recorded his offsprings’ activities such as his middle son Jean’s first attempts at sewing (on the right), whose hair was not cut until he reached school age. (See: end of blog for full credits.) 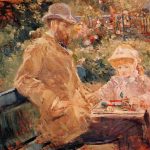 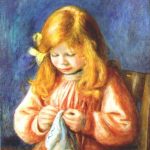