Click on the paintings to enhance or enlarge them.

Would you like to to be transported to the Paris of the Belle Epqoue, when the city was at its artistic and cultural zentith?  The Petit Palais’ Paris 1900: The City of Entertainment, a mulit-dimensional display of some 600 works of art that opened last week, offers the perfect environment for time travel into this era. Because the museum was actually constructed in1900, for the Universelle Exposition or world’s fair, held to both celebrate the achievements of the past century and expected advancements of the future (eclipsed shortly by World War I).   Click the following link to view some highlights:

Paris 1900: The City of Entertainment

Although the paintings of the Impressionists are included in the exhibition, the stars of the show appear to be a number of artists who are barely known in 2014. Yet, over a hundred years ago, they were generally more acclaimed than Monet or Renoir or Degas, receiving awards and accolades at the Salon, the annual display of the official art establishment.  Their style, too, was basically realistic, even photographic in technique, and associated at times with the Academic tradition which emphasized historical as well as mythological themes.

However, information on their careers is often difficult to obtain. So let’s just enjoy this gallery of French painters—Clairin, Avy, Prinet, Beraud and Bouguereau— with a few facts I’ve been able to compile.

For example, Georges Clairin (1843-1919)  was the designated portraitist of his sometime lover and friend actress Sarah Bernhardt. In this portrayal done for the Salon, the “divine” Sarah reigns supreme, surrounded by the sumptuous interior of her newly acquired mansion, a symbol of success. Only her greyhound, turned away from his mistress, seems unimpressed. 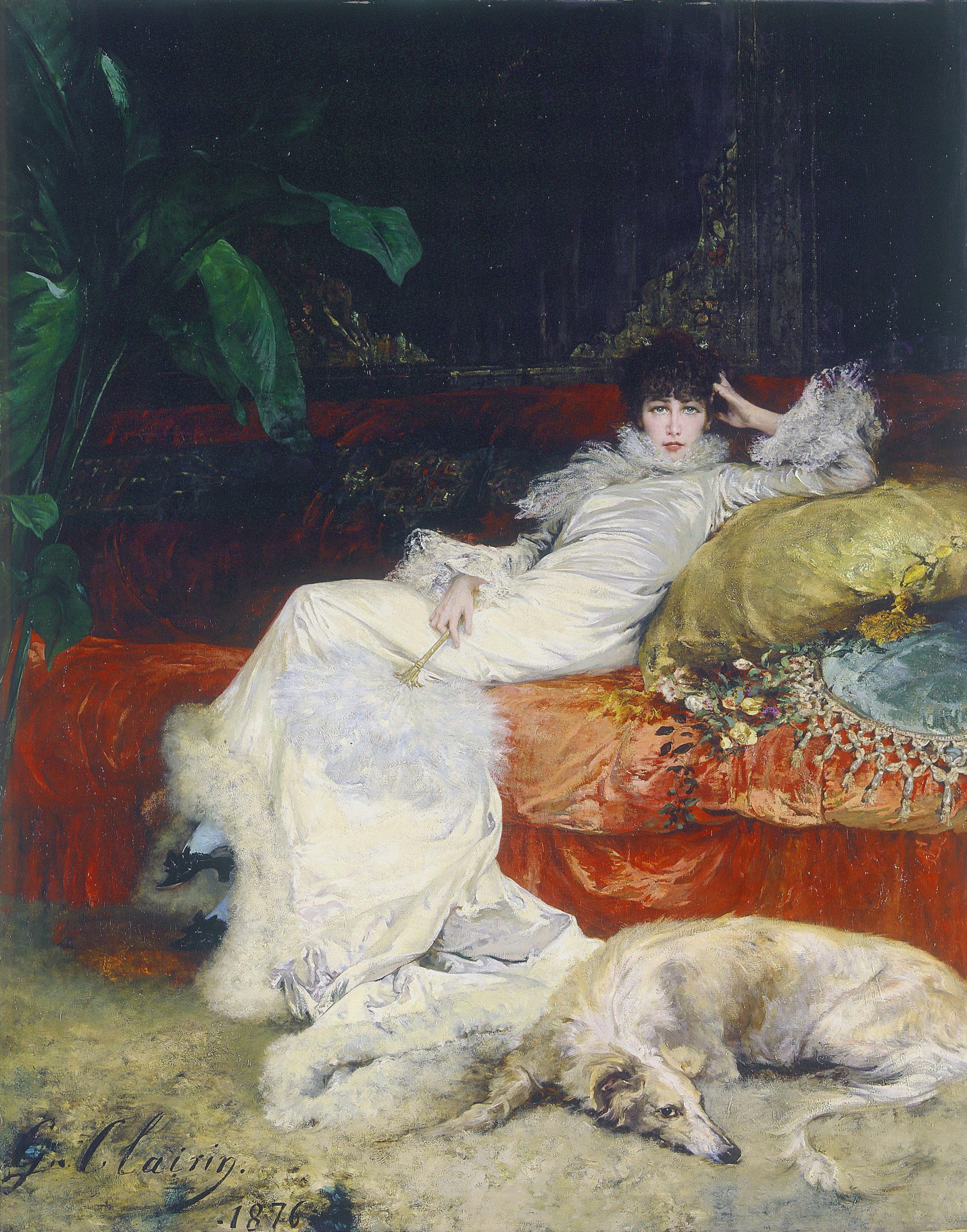 Joseph Marius Avy (1871-1939) participated in the Salon too, where Bal Blanc probably attracted admiring crowds. For who could have resisted this ballroom of unmarried girls preparing for their first dance?  Lovely innocents attired in mainly pinks and whites, swirling together in an atmosphere of wealth and opulence. But what about the accompanist? Does she belong to their privileged group, generously helping them to practice for the upcoming debut?  Or has she been hired by an anxious father? 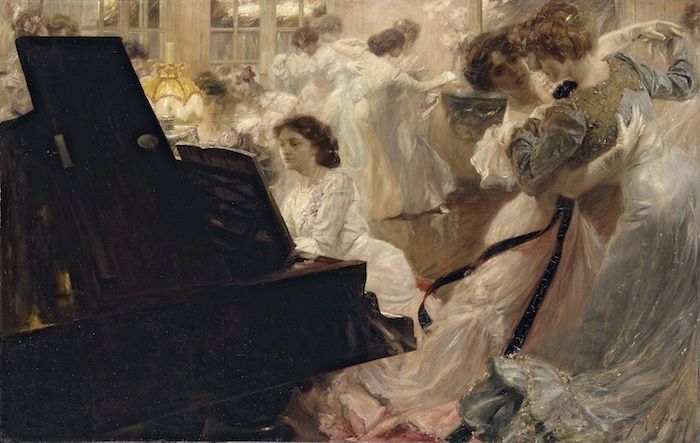 In contrast, The Balcony by Rene Francois Xavier Prinet (1861-1946) suggests the darker side of the Parisian lifestyle.  His viewpoint is from the shadowy edge of this gathering of high class prostitutes and gentlemen clientele, transitioning into the artificial light of an elegant brothel.  If you are a fan of Anne Perry, maybe you’ll recognize Prinet’s work on the cover of Midnight at Marble Arch, the 28th book of the Victorian murder series featuring Charlotte and Thomas Pitt.

The next painter Jean Beraud (1849-1935) specialized in street scenes of Paris, often depicting its crowded thoroughfares of milliners and shop workers, strollers and onlookers. However, in The Wait, Beraud focuses on an encounter in a quiet urban neighborhood, utilizing empty spaces and contrasting colors to dramatize what may be an assignation between two lovers.

Finally, William-Adolphe Bouguereau (1825-1905) was the supreme master of the Salon and Academic art during the latter half of the nineteenth century.  His then popular subjects of classicized nudes and peasant children are considered overly sentimental today, though some art historians are reevaluating his body of work.

But can anyone criticize his rendering of Gabrielle, the daughter of colleague Pierre Auguste Cot? 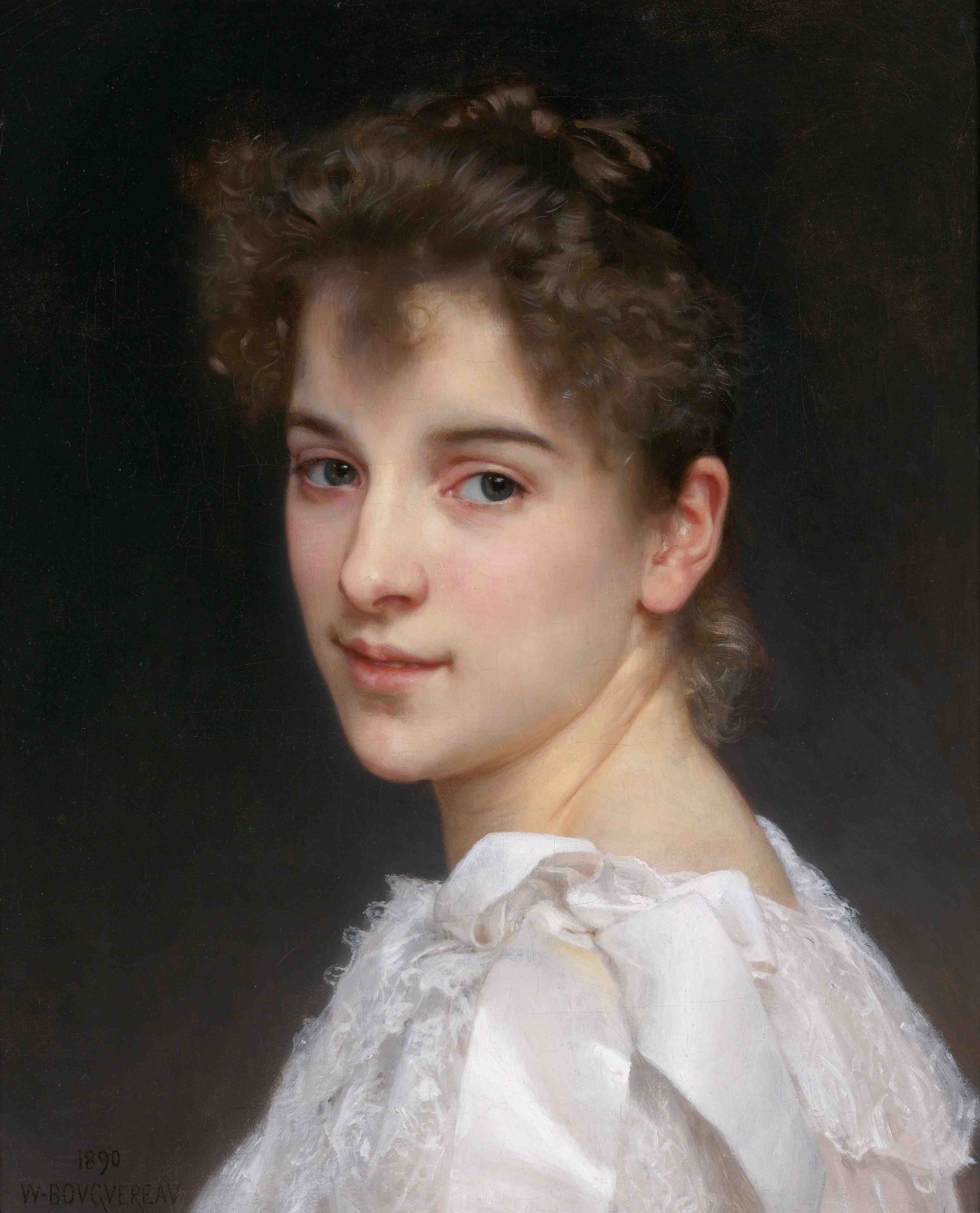 The background for the blog is from various sources including the website of the Petit Palais.

The Wait is in the public domain also in the United States.