Just because you have all been beaten by Wellington, you think he’s a good general.  I tell you Wellington is a bad general, the English are bad troops, and this affair is nothing more than eating breakfast.*

Napoleon, just prior to the Battle of Waterloo, 1815 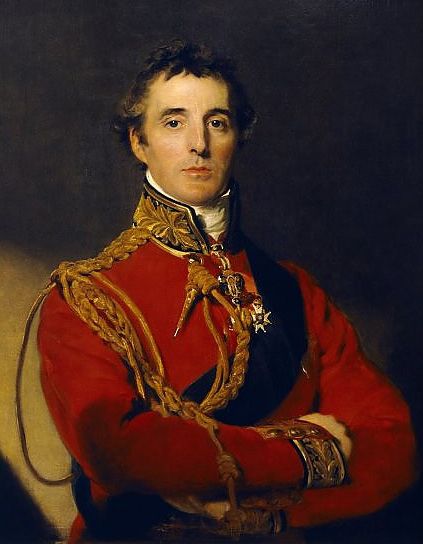 Arthur Wellesley, the first Duke of Wellngton, was a significant player in the Bonaparte saga.  He never met Josephine or Napoloen, but he helped determine their fates by his superior performance on the battlefield.

Josephine had already died when the striking portrait above by British portraitist Thomas Lawrence (1769-1830) was created, just before Napoleon’s final defeat  at the Battle of Waterloo. Would she, though, have been attracted to the handsome duke, overlooking his role in her husband’s demise?  For Josephine was walking in her garden at Malmaison with another of Napoloen’s enemies, Tsar Alexander I of Russia, when she caught the cold that resulted in her fatal attack of pneumonia in 1814.

Lawrence was the favorite painter of the Prince Regent (later King George IV) and regularly portrayed members of the royal circle; he also immortalized other heads of state including the Russian czar mentioned above. In 2010, the National Portrait Gallery in London organized a major retrospective of his career.

The Duke of Wellington’s palatial London townhouse is the site of a renowned collection (including Velasquez and Goya):

*Quote of Napoleon from Years of the Sword by Elizabeth Longford, Pantheon, London, 1971.