THE ART OF THE MISSING: LOSS AND HOPE, PART I

I’m doing research for a presentation on the Monuments Men, who as part of the U.S. military, helped saved Europe’s cultural treasures during World War II.  Despite their bravery and courage, at least 100,000 works of art were lost in fires and bombings. But even if I knew the exact total, I still wouldn’t be able to fully comprehend the magnitude of such destruction.

Yet, this loss always seems more real and immediate, when I open an art book and see “destroyed in the Second War World” by an artist’s individual creation. Or sometimes, the caption will read location unknown, which often indicates a similar fate. The following virtual exhibition,The Art of the Missing: Loss and Hope will be dedicated to some of these lost masterpieces by Monet, Van Gogh, and Degas, including one surprise.  It will be divided into two sections, beginning today with Monet and continuing with Van Gogh and Degas tomorrow.

Note: the quality of a few reproductions has been affected because of the paintings’ disappearance and lack of appropriate images.

WITHOUT A TRACE—A LANDMARK OF IMPRESSIONISM

Here I am again, stopped for want of paint…..I had a dream, a tableau, the bathing place at La Grenouillere for which I have made some rotten sketches, but it’s only a dream.*

In September, 1869, Claude Monet (1840-1926) was struggling, along with his friend Pierre-Auguste Renoir (1841-1919) to find a new way to interpret the world around them. They were working together at La Grenouillere or “frog pond,” a popular swimming spot easily accessible by train from Paris. Both artists were so destitute, that according to Monet, Renoir is bringing us crusts from his home so that we don’t starve.  Art supplies were low too as Monet complained to his fellow painter Frederic Bazille in the quote above, greatly slowing his progress.

Monet did manage to execute La Grenouillere, now at the Metropolitan Museum, which is generally recognized as the foundation for what would be ultimately known as Impressionism. For one of the first times, Monet applied the short, thick, multi-colored brushstrokes that became the trademark of the style—transforming the flat surface of the canvas into a simulation of moving reflections of light on water.  Although isn’t La Grenouillere rather dark overall?

Or Monet’s next oil done at the “frog pond,” Bathers at Grenouillere, painted probably a few steps from Monet’s initial location. Do you agree or disagree? 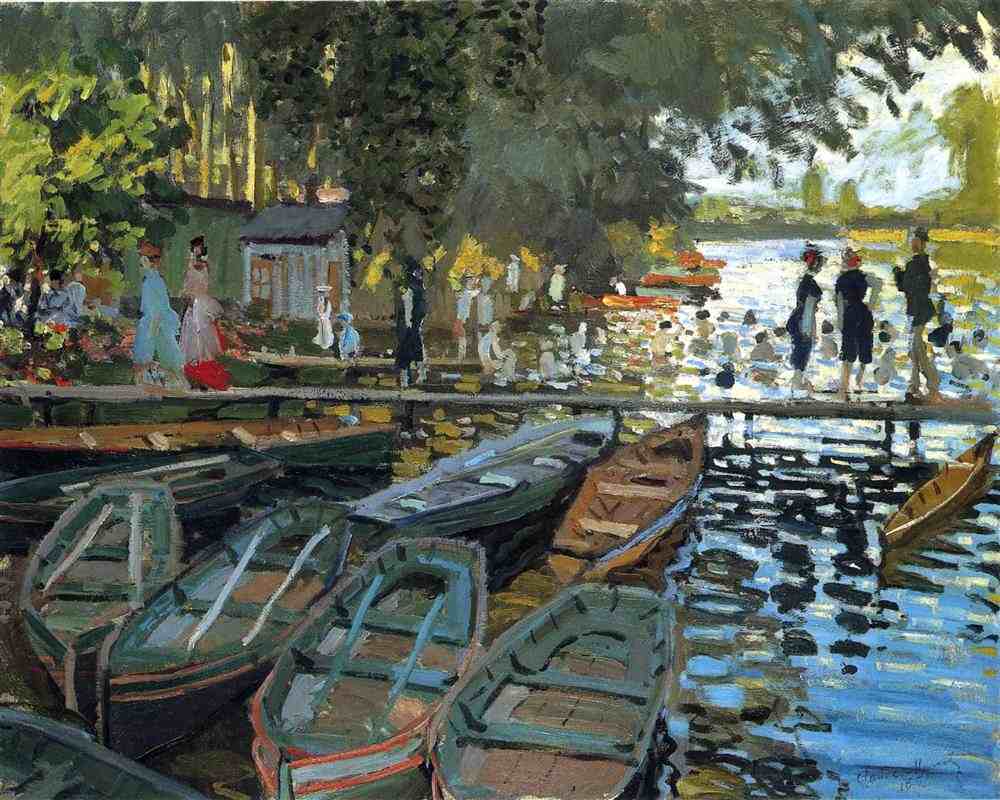 Because La Grenouillere in this blog was only a preparatory sketch for the dream or tableau Monet referred to in his correspondence with Bazille and that he actually was able to finish for the Salon of 1870. Amazingly, no visual record exists of what the artist would likely have considered a major work.

Then, some 75 years after it was completed, it was tragically destroyed during a bombing raid over Berlin, along with another Monet, Fishing Boats at Honfleur done in 1866. Both paintings were reportedly in a bank vault, part of German millionaire Eduard Arnhold’s once famous collection.

At least a black and white photograph of Fishing Boats at Honfluer remains, but Monet’s dream seems to have vanished–without a trace. 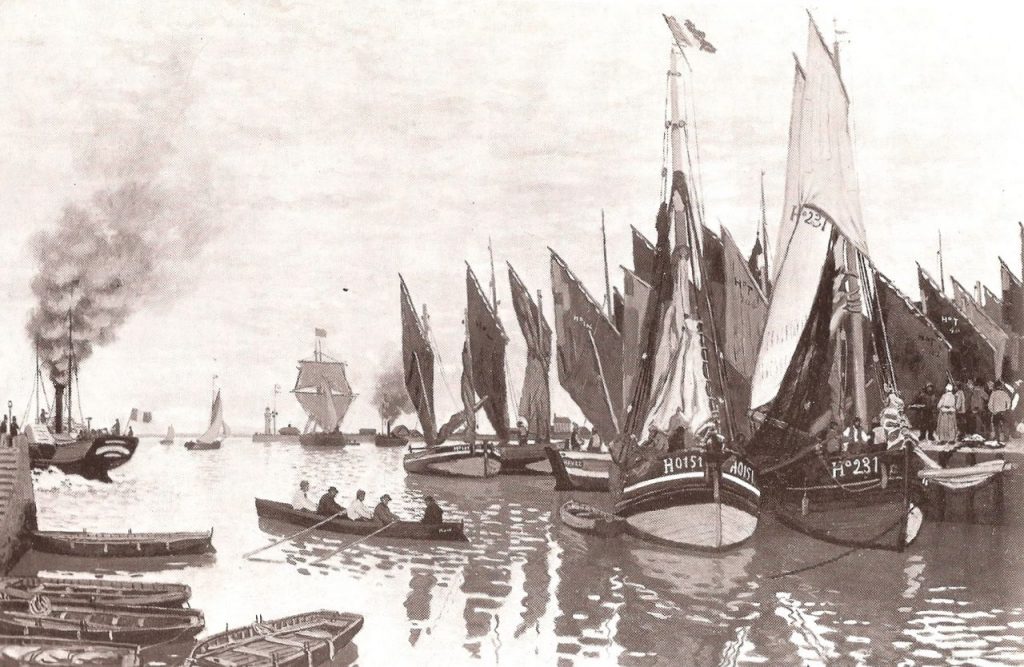 AN AFTERNOON AT THE MONETS: A MISSING PAINTING AND THE MONUMENTS MEN

By 1874, Monet’s financial and professional status had substantially improved. From the increasing sales of his paintings, he was able to rent a house in the Parisian suburb of Argenteuil, where he resided for some 7 years. Renoir visited frequently, continuing his more than a decade long friendship with Monet.  While another regular guest was Edouard Manet (1832-1883), who although never officially an Impressionist, had inspired Monet with his groundbreaking artistic innovations.

Manet respected his host’s talent, but his estimate of Renoir’s abilities was decidedly less complimentary. For according to Monet’s 1924 recollection of their joint painting session one summer afternoon,

Manet, thrilled by the color and the light undertook an outdoor painting of figures under trees.  During the sitting, Renoir arrived….He asked me for palette, brush, and canvas, and there he was, painting alongside Manet….then Manet made a face, passed discreetly near me, and whispered in my ear about Renoir: “He has no talent that boy!  Since you are his friend, tell him to give up painting!”

Fortunately for posterity, Renoir did not overhear Manet’s assessment.  Which interpretation of Monet’s wife and son do you prefer? Renoir’s Madame Monet and Her Son in Their Garden at Argenteuil, presently at the National Gallery of Art in Washington, D.C., provides us with a close-up perspective, plus a rooster too.  He actually created several portraits of Camille during her short life of 32 years, often capturing the freshness and vitality of her beauty.  Yet, here do her eyes appear tired? 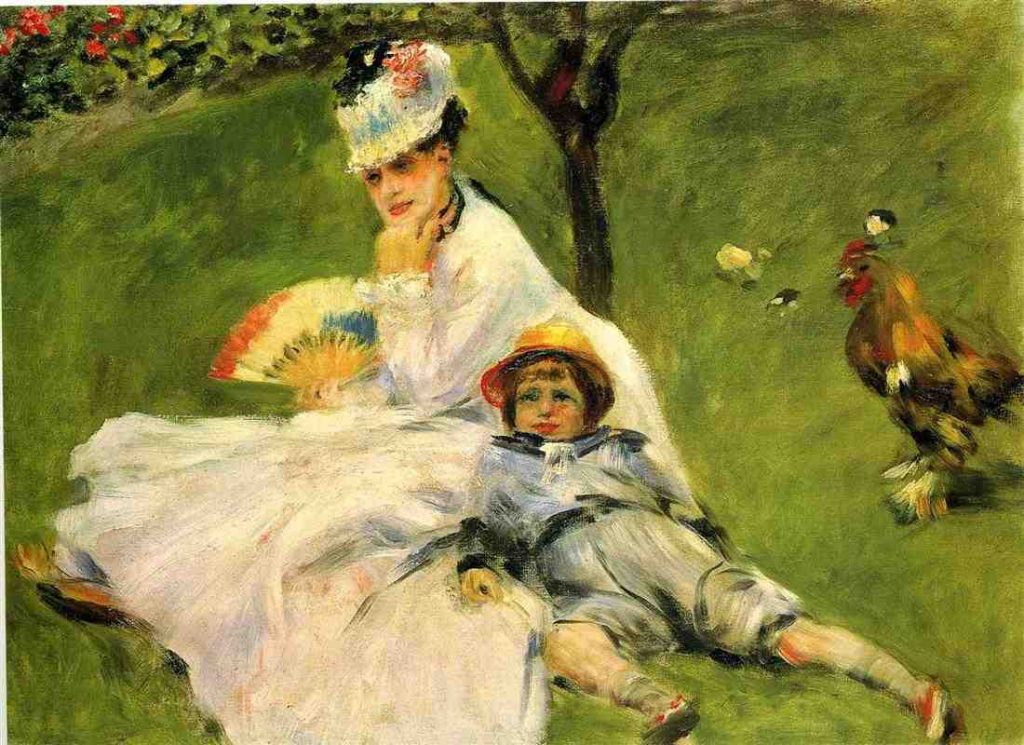 Pierre-Auguste Renoir, Madame Monet and Her Son in the Garden at Argenteuil, 1874, oil on canvas, National Gallery of Art, Washington, D.C.

Whereas Manet in the Metropolitan Museum’s The Monet Family in the Their Garden at Argenteuil, depicts the family at a distance, adding the artist-gardener Monet watering his precious flowers (as well as including a few wandering chickens). However, both Manet and Renoir immoralize the Monets, using rapid, energetic brushwork combined with vibrant color and light. Were they competing with each other, particularly Manet who was just starting to paint in the Impressionist style that Renoir had mastered? For despite his derogatory remark, the older painter already owned a canvas by his younger rival. 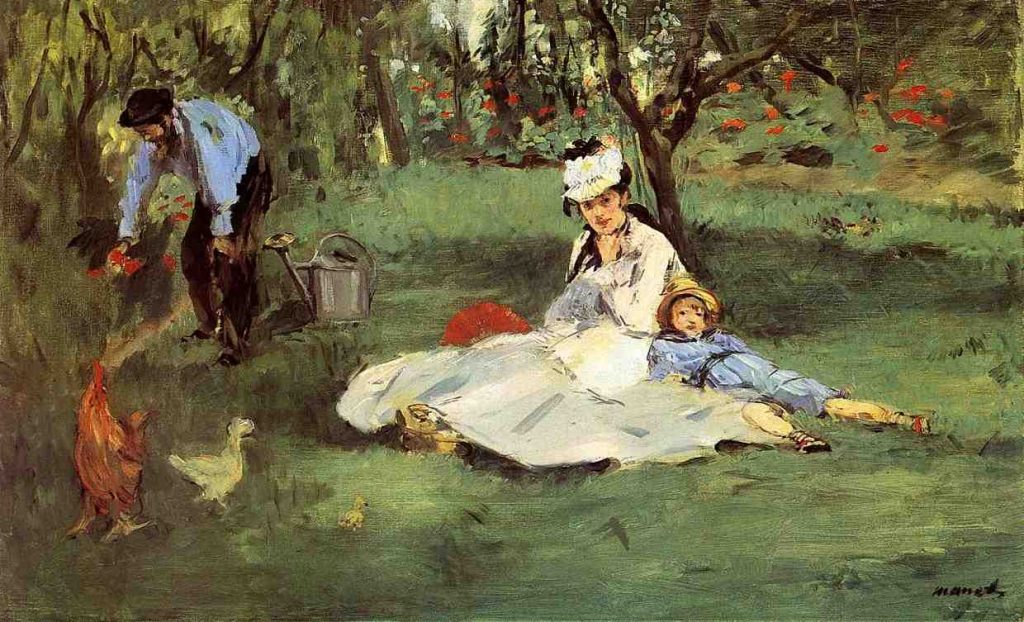 Edouard Manet, The Monet Family in Their Garden in Argenteuil, 1874, oil on canvas, Metropolitan Museum of Art, New York

Both paintings have found homes in major art museums in the United States. Although whatever happened to Manet Painting in Monet’s Garden by Claude Monet, also created that day 140 years ago? Perhaps in thanks for Manet’s generous portrayal of Camille and Jean, Monet reciprocated with a likeness of his colleague concentrating on his subject.

Nearly a quarter of a century afterward, German artist Max Liebermann (1847-1935), a follower of Manet, purchased Manet Painting in Monet’s Garden, probably in honor of his idol.  Liebermann, who was Jewish, died in 1935, leaving the painting, along with the rest of his extensive holdings to his widow. In 1943, the Nazis confiscated the work which has not been seen again. Perhaps, though, being listed on the Monument Men’s Most Wanted Works of Art  might lead to its rediscovery. 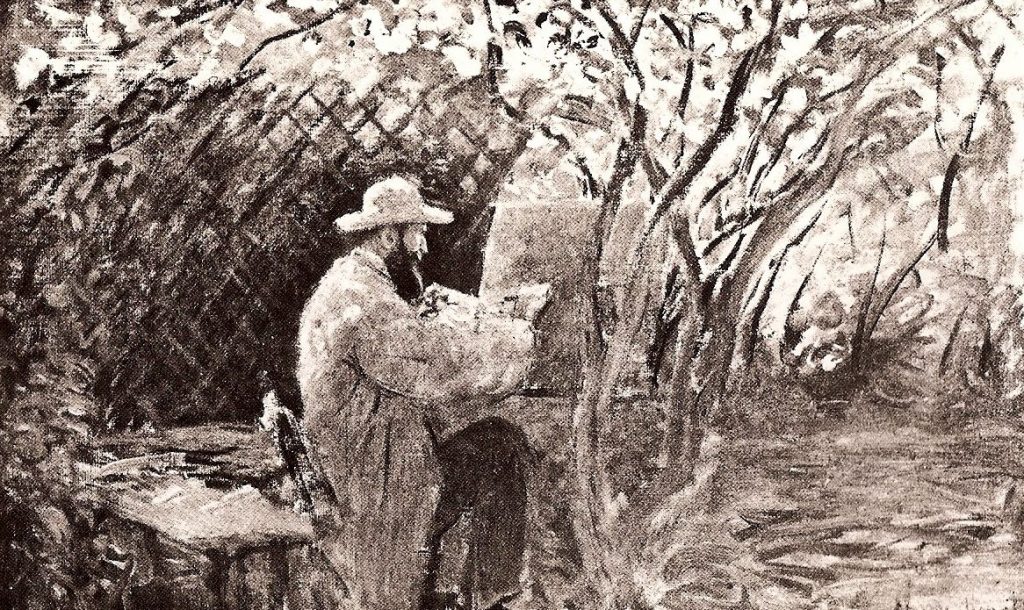 COMING TOMORROW: VAN GOGH, DEGAS, AND THE HOPE OF RECOVERY

The resources for this blog include: The History of Impressionism by John Rewald, published by the Museum of Modern Art, New York, 1973; River of Light: Monet’s Impressions of the Seine by Douglas Skeggs, Alfred A. Knopf, New York, 1987; The Monuments Men website.

And revitalize your everyday routines with Through an Artist’s Eyes: Learning to Live Creatively.