Since the time, I have wandered over a good part of the Territories and have seen much of the varied scenery of the Far West, but that of the Yellowstone retains its hold upon my imagination with a vividness of yesterday.

Only a few subway stops from the U.S. Capitol, in the Smithsonian’s National Museum of American Art, hang two blockbuster paintings of The Grand Canyon of the Yellowstone by Thomas Moran (1837-1927).  Reminding us of the vital link between Congress and the artist who created these massive canvases in the late 19th century.  For his interpretations of one of the earth’s natural wonders, moved the majority of legislators in the post Civil War period, to designate the Yellowstone region as the first national park on March 1, 1872.

Moran, who expressed his love of landscape with the dramatic power inherited from Thomas Cole and the Hudson River School (see: Wednsday’s blog) was the ideal artist to join the U.S. Geological Survey expedition headed by Dr. Ferdinand Hayden. its goal was to document the still basically unexplored expanse almost a continent away.

Yet, Moran had never been west of the Hudson River. Originally from England, he had lived primarily in Philadelphia, and was more familiar with the Eastern seaboard and his native Great Britain as represented in Fingal’s Island of Staffa, Scotland, executed later in his career.

However, Moran, then 37, adjusted surprisingly well despite calling himself the perfect greenhorn, barely able to ride a horse. Somehow enduring the 40 day trek through what was once commonly known  as “Colter’s Hell.” Named after John Colter, the first non-Native American to venture into the area who described it as a land of fire and brimstone.

So let’s take a quick tour of Yellowstone National Park, through an artist’s eyes, starting with Mammoth Hot Springs, where according to Hayden, the scenery in the vicinity is varied and beautiful beyond description.  Moran depicted some 30 geological sites through the fluid medium of watercolor, which allowed him to rapidly capture the astonishing marvels of Yellowstone including its unforgettable rock formations and startling geysers. 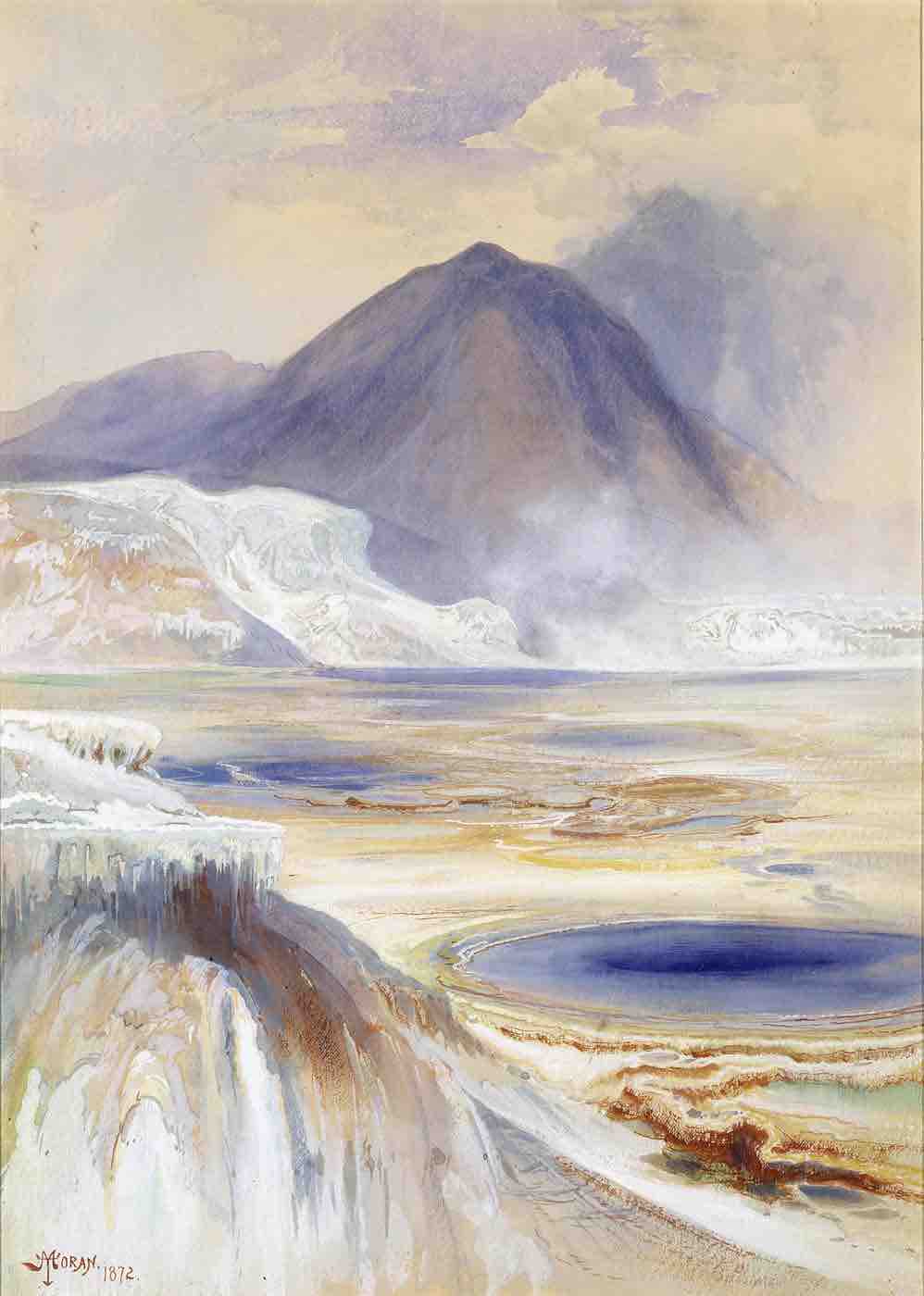 In The Great Hot Springs of the Yellowstone, Moran provides another perspective of the same locale, focusing on the network of multi-colored terraces that could have influenced the congressmen who voted for its permanent preservation. 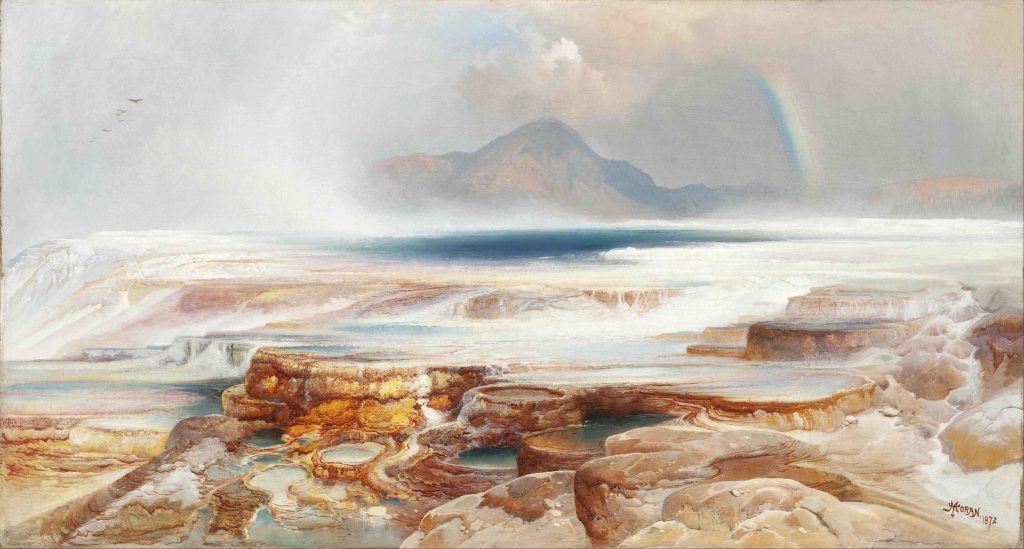 But the Grand Canyon of the Yellowstone, immortalized on film by expedition photographer William H. Jackson (1843-1942), was the ultimate destination of Moran. 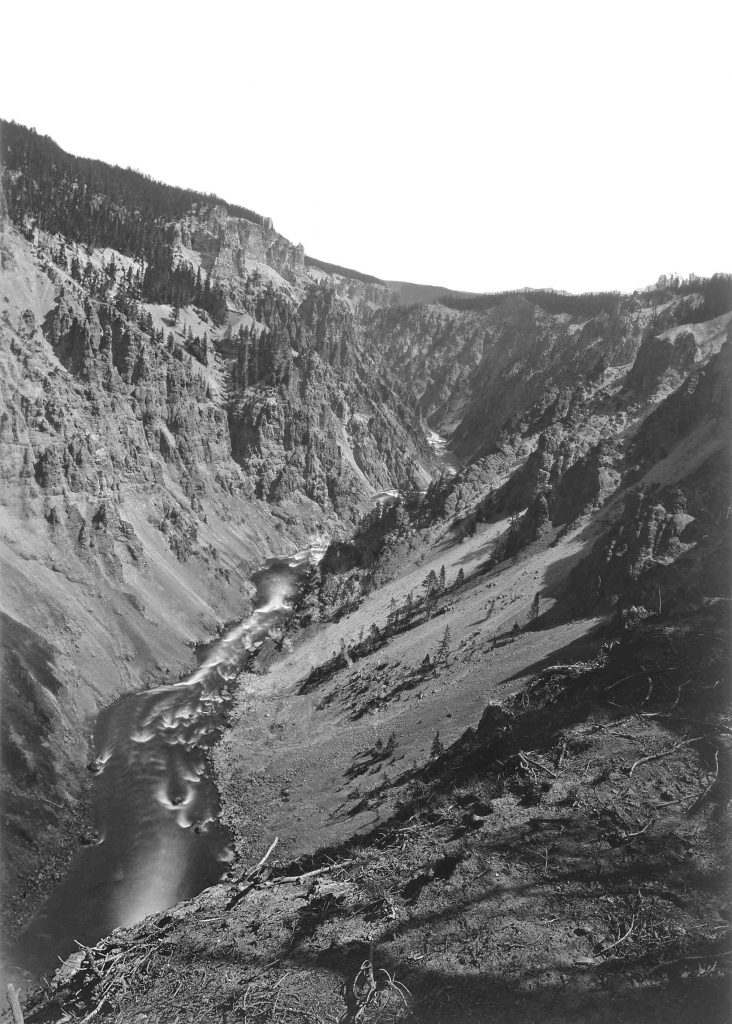 William H. Jackson, Grand Canyon of the Yellowstone from the foot of the Lower Falls, photograph

A sacred place to him beyond the realm of human art.   Yet, he was unafraid of its challenge, producing Grand Canyon of the Yellowstone, shortly after he returned in 1872, which was then purchased by the U.S. Congress and initially exhibited in the Senate lobby. 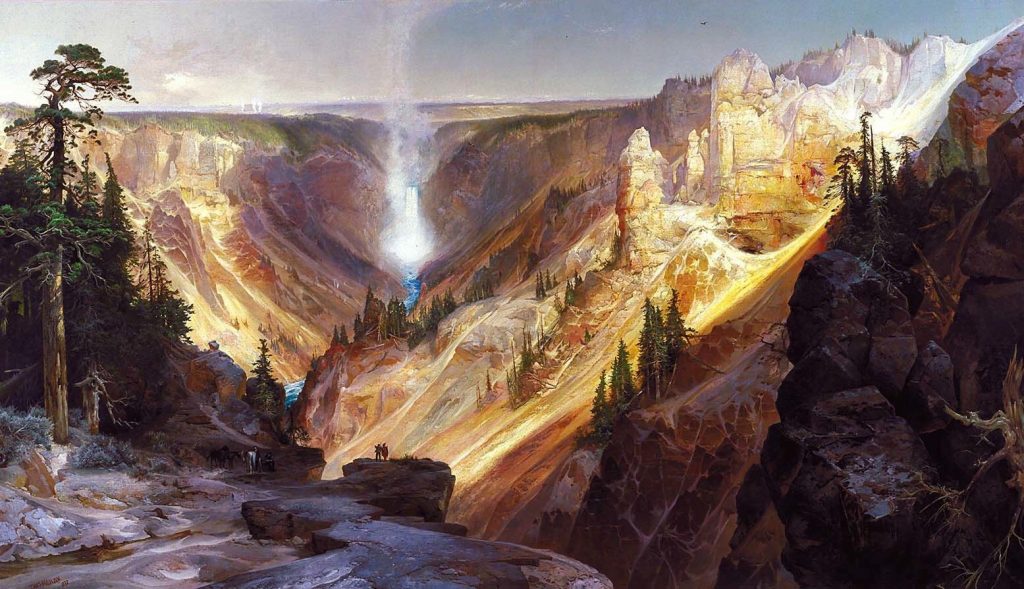 Thomas Moran, The Canyon of the Yellowstone, 1872, oil on canvas, Smithsonian National Museum of Art, Lent by the Department of the Interior

Followed over 20 years later by another larger version.

The motive or incentive of my “Grand Canyon of the Yellowstones” was the gorgeous display of color that impressed itself upon me….I did not wish to realize the scene literally, but to preserve and convey its true impression…. 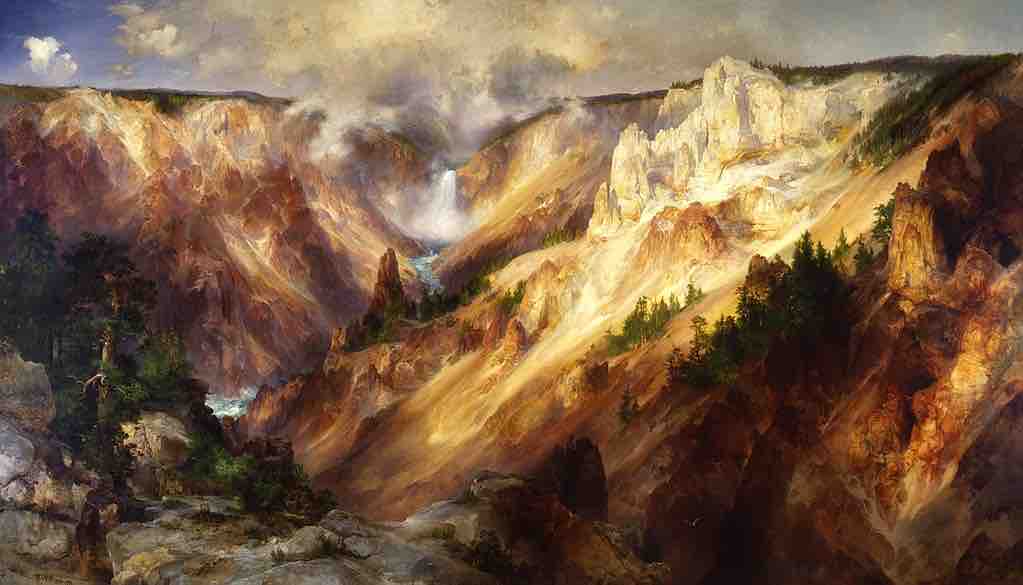 The above resources are used solely for educational purposes.