This blog is reposted from before.

Sometimes an artist discovers that special place that becomes a vital source of his or her vision. For Van Gogh, it was Arles, Gauguin, Tahiti, Georgia O’Keeffe, Ghost Ranch and Monet, Giverny. But Monet (1840-1926) also had Argenteuil—an Impressionist  paradise of endless summers, until he was finally forced to depart, never to return.

So take a journey with Monet today, first down the Seine, either via his floating studio (below) or on land. 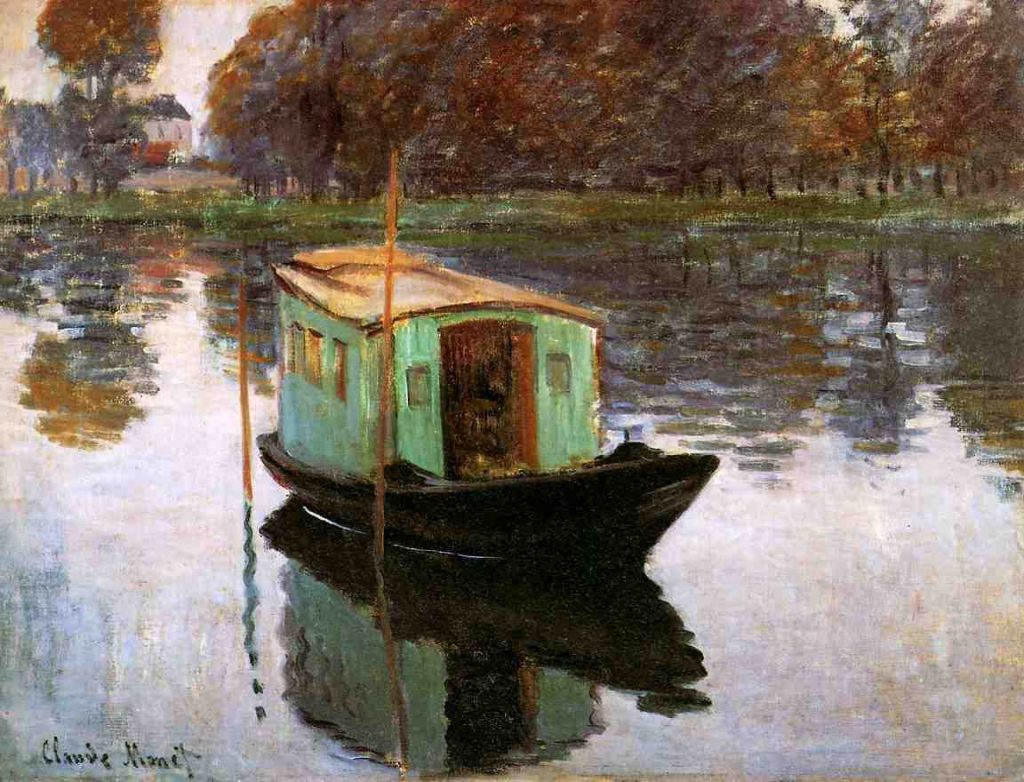 The Franco-Prussian War was over only a few months when Monet and his young family returned to France in late 1871, after seeking refuge in London. By December they had moved to Argenteuil, a suburb only a short train ride from Paris. The scars of the Prussian invasion are still evident in Monet’s Highway Bridge Under Repair below–a detailed depiction of the wooden scaffolding used in reconstruction. One of the first paintings of some 170 works created during Monet’s stay in Argenteuil from 1871 to 1878, it a also grim testament to the destruction of war. 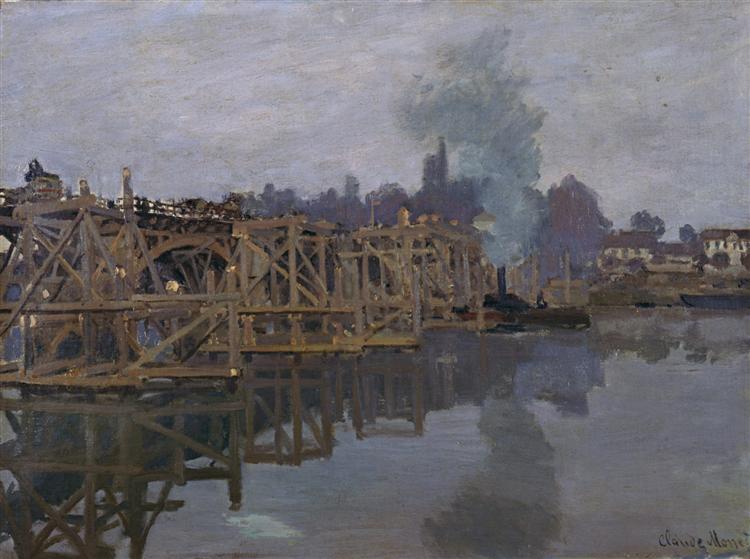 Soon, though, the healing powers of nature helped Monet and his countrymen to forget the past and enjoy the  benefits of peace again. 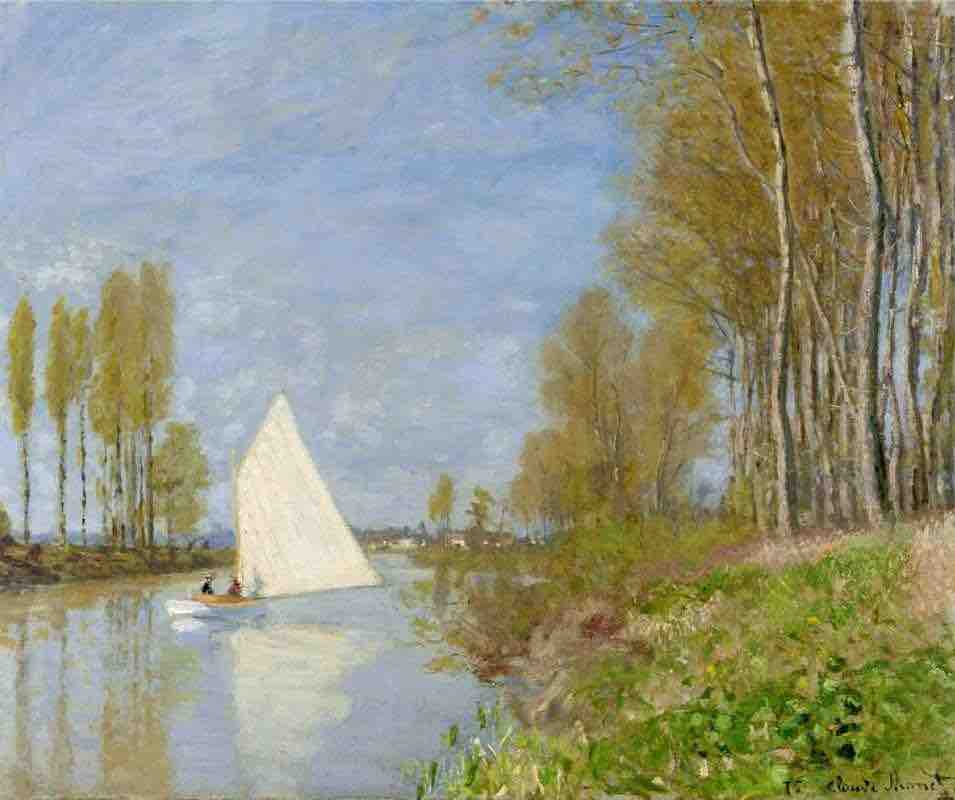 When Sunday afternoons were now reserved for a promenade into the heart of Argenteuil, whether you were a Parisian escaping the city or a local resident taking a leisurely stroll near your home. In The Basin at Argenteuil, the path itself is wide and unpaved, bordered by an avenue of slender trees and a view of the busy river. Do you see the renovated bridge in the distance? 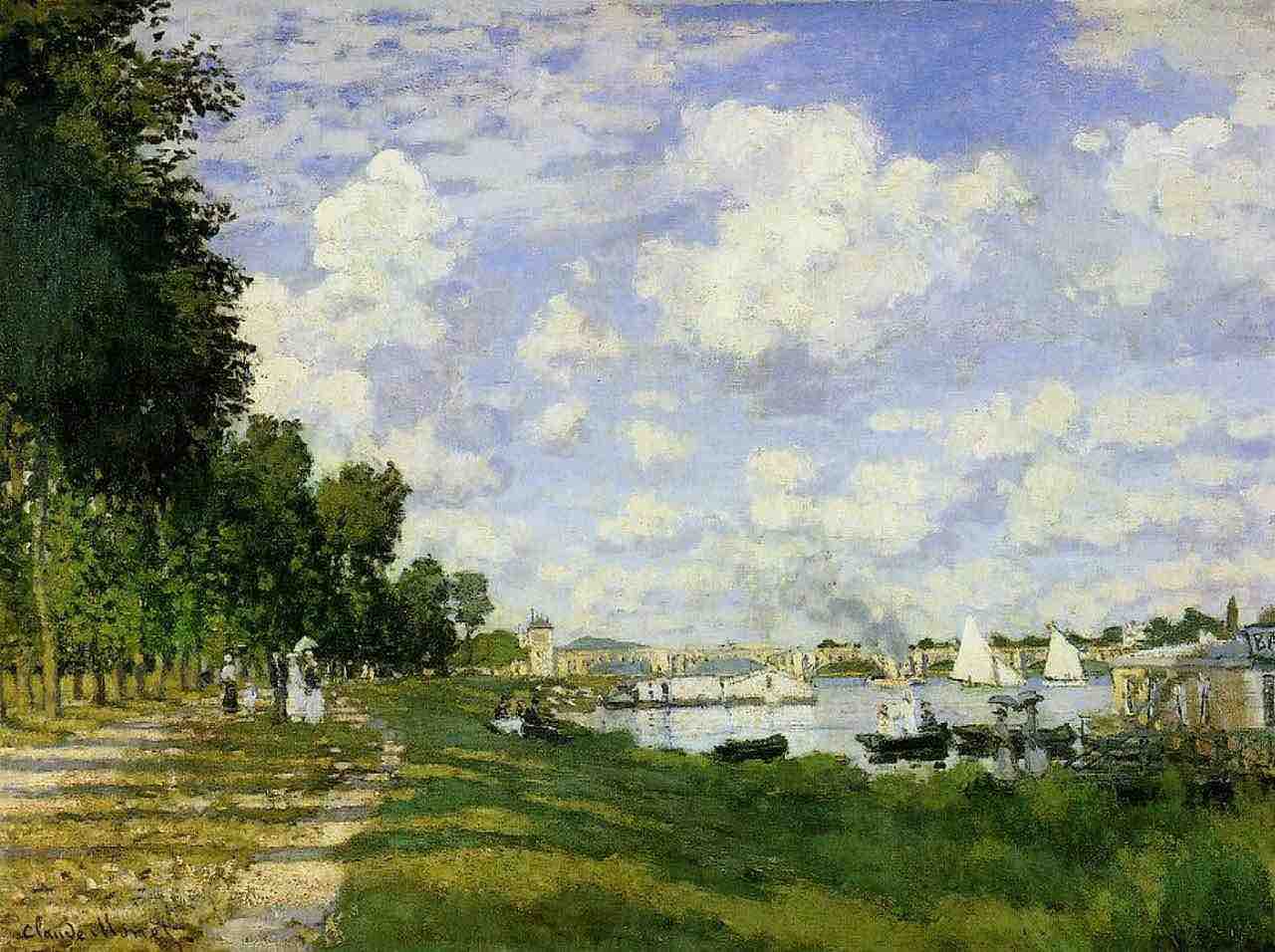 But for Monet, it was an opportunity to experiment with his new painting technique: breaking up the surface of his canvas into individual multi-colored brushstrokes as well as contrasting shadings of light and shadow. To sculpt the clouds into white swirls of pigment laid upon a lavender blue background, while applying a range of rich greens to define the foliage and grass.

Yet, Monet preferred to set up his easel in what is likely the opposite direction. Because Argenteuil at the National Gallery of Art in Washington, D.C., belongs to a four part series, forerunner of the multiple Haystack and Cathedral paintings done some 20 years later.  A quiet, more tranquil perspective leading our eye effortlessly into the horizon, directly to an elegant chateau, a remnant of the past.  A sailboat also catches our attention, gliding on the glass-like surface. A group of women, too, can be detected in the woods, just on the periphery of our visual field. 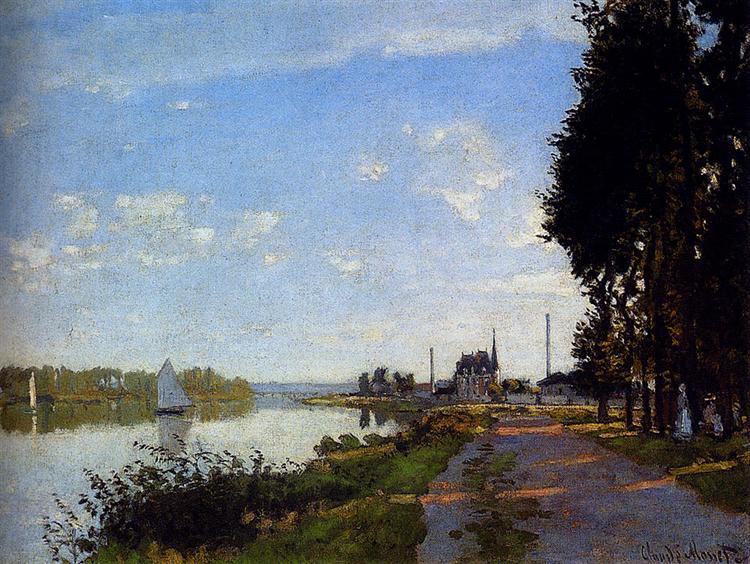 Monet returns to this favored site in The Promenade at Argenteuil.  Did you initially miss the factory stacks near the chateau, now spewing smoke into the air in this second version? 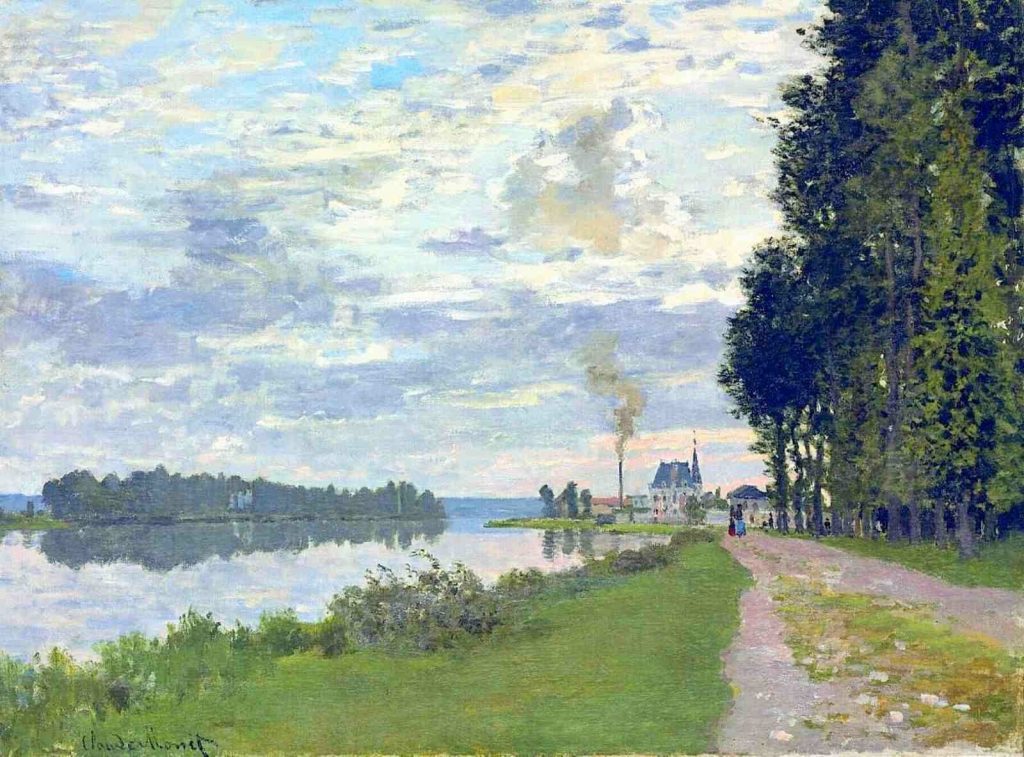 However, air pollution is still not pervasive in Monet’s Shangri-la on the Seine. Here in The Bridge at Argenteuil, he takes us to its shore where the sky and the water are merged into a sparkling pool of luminous reflections. Argenteuil, then famed for its regattas, always offered a display of floating vessels, from the top racing craft to the humble canoe.  Attracting spectators like the tiny figures on the highway bridge, probably invigorated by the perfect weather. 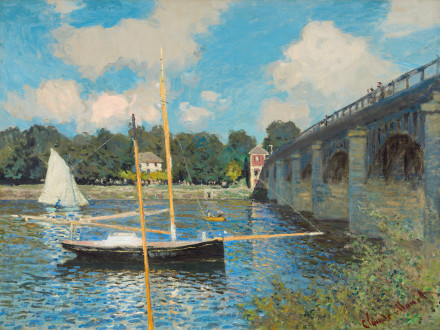 Even at sunset, the yachtsmen continued their mini-voyages up and down the Seine, against the dramatic backdrop of the ending day.  Were any of them aware of the tireless painter positioned somewhere in the bushes, capturing their love of sailing in Marine View with a Sunset? 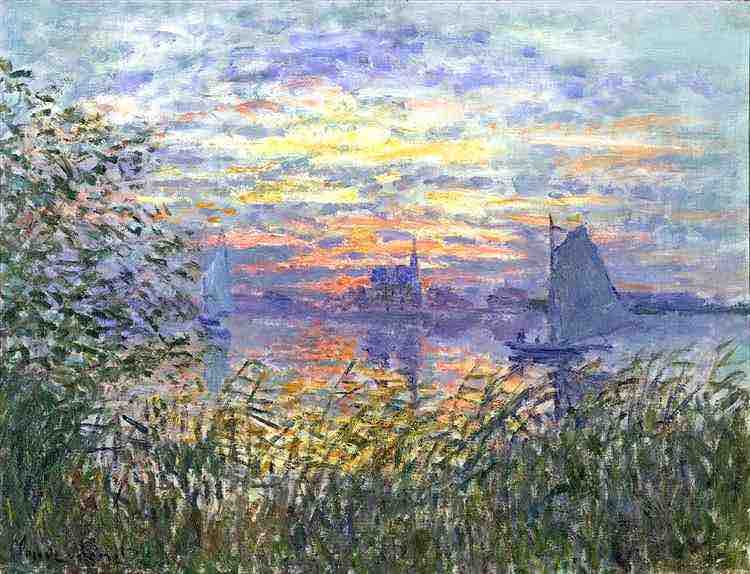 The main sources for this blog are River of Light: Monet’s Impressions of the Seine by Douglas Skeggs, published by Gollancz, London, 1987 and the  website of the Musee D’Orsay.

Claude Monet and other master artists are your artistic companions in Through an Artist’s Eyes: Learning to Live Creatively.

art appreciation, Impressionists, museums in art, the river in art