THE MOST BEAUTIFUL SPRING IN ART

A VIRTUAL EXHIBITION, PART I

Yesterday was Van Gogh’s 168th birthday.  Have you ever wondered how many Van Gogh exhibitions have been held in art museums throughout the world? Because of the coronavirus pandemic, some art museums and galleries are temporarily closed.  However, we can still enjoy his works of art in a virtual exhibition.

At  the top of my Van Gogh wish list is a display I would call The Most Beautiful Spring in Art—a tribute to Vincent’s first months in Arles.  A period when he was working at a level of creative intensity surpassed only by nature itself. For Vincent was literally trying to capture spring on his canvas, particularly the blossoming orchards on the outskirts of the city.

Tomorrow, we’ll take a walk with Vincent on this artistic journey.  First, though, let’s experience, through the artist’s eyes, the weeks just before.

In February of 1888, Vincent van Gogh, was ready for a major change. He had been living in Paris for 2 years with his art dealer brother Theo, absorbing the innovative works of the Impressionists and other avant garde painters. But he was hungry too for the freedom of the  countryside, eager to escape both the cold and congestion of the French capital.  So Vincent decided to leave, taking an express train on Sunday, February 19, to the historic city of Arles and the warm climate of the South of France, where in his words, there is more color and sun.*

Except when he reached his destination some 24 hours later, he wrote his brother Theo of at least two feel of snow on the ground, and it is still snowing. ** Vincent did manage to trek a couple miles beyond Arles soon after his arrival, depicting the white expanse of Landscape in Winter, proof of the unexpected snowfall. 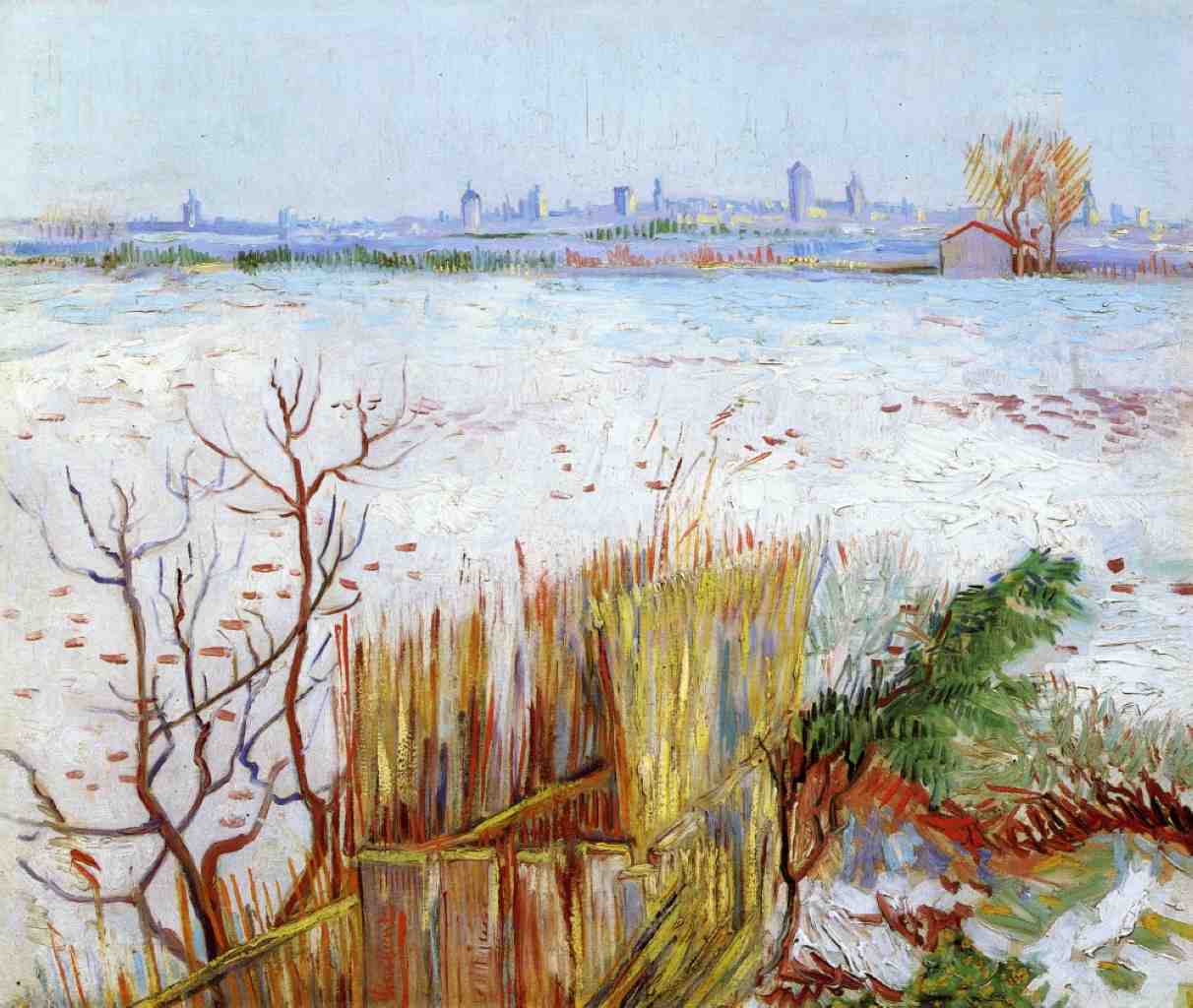 Yet, even Vincent could not always defy the elements. Confined to his room at the hotel Carrel because of the inclement weather, Vincent was reduced to painting the store across the street in the claustrophobic A Pork Butcher’s Shop Seen Through a Window. 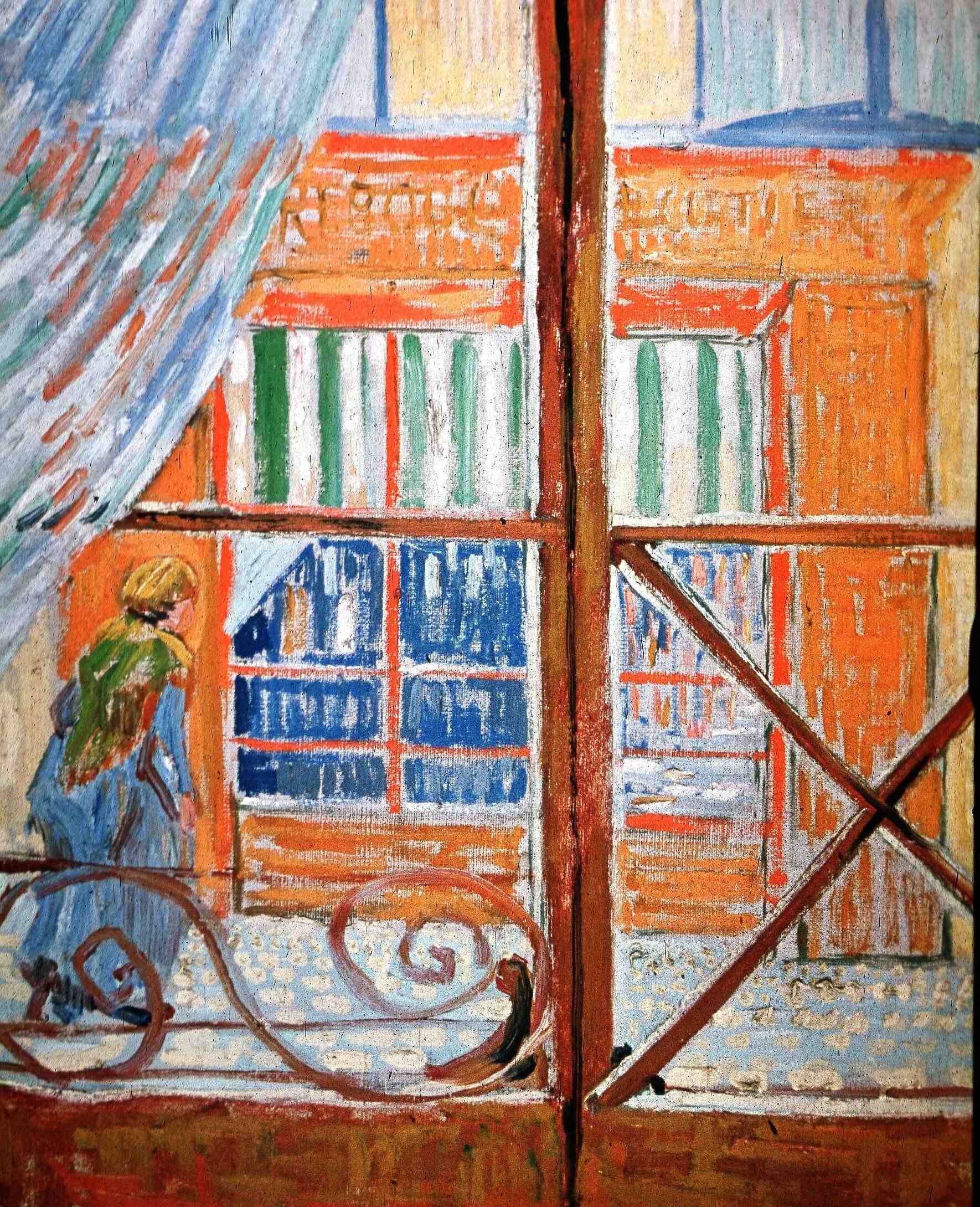 A Pair of Leather Clogs, a solid portrait of utilitarian shoes, was also likely the result of Van Gogh being forced to remain indoors, 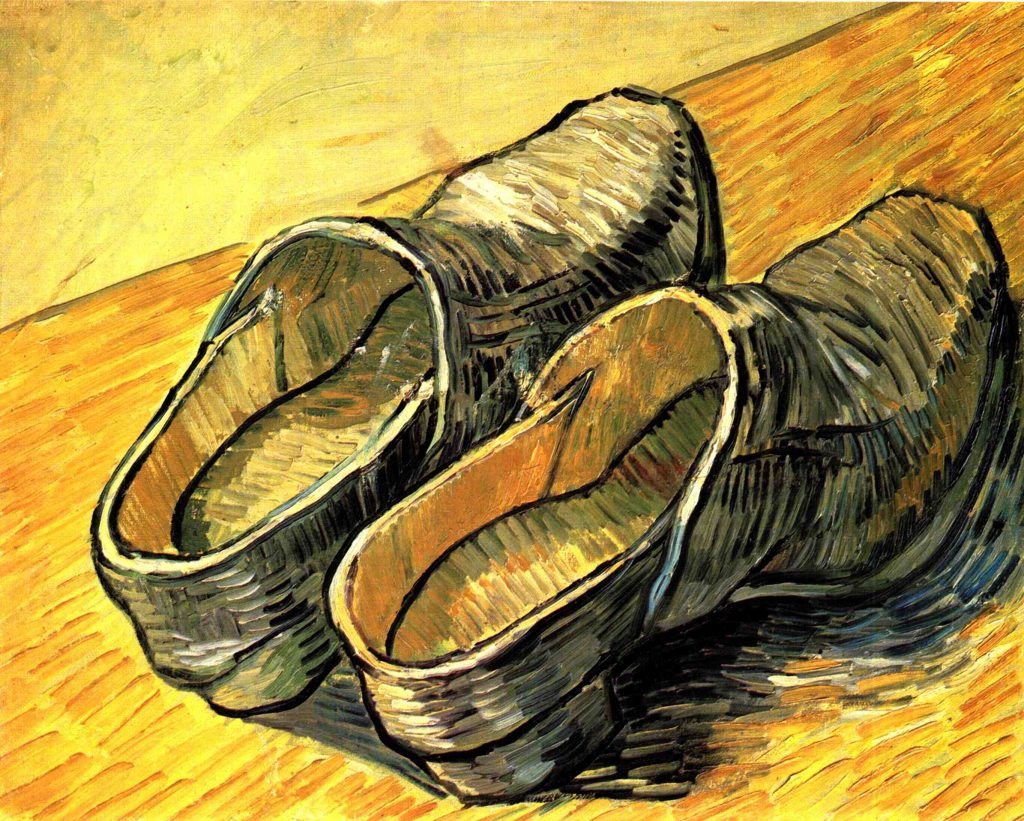 along with his portrayal of an unappetizing bowl of some peculiar appearing potatoes (do some of them seem to have faces or is it my imagination?). 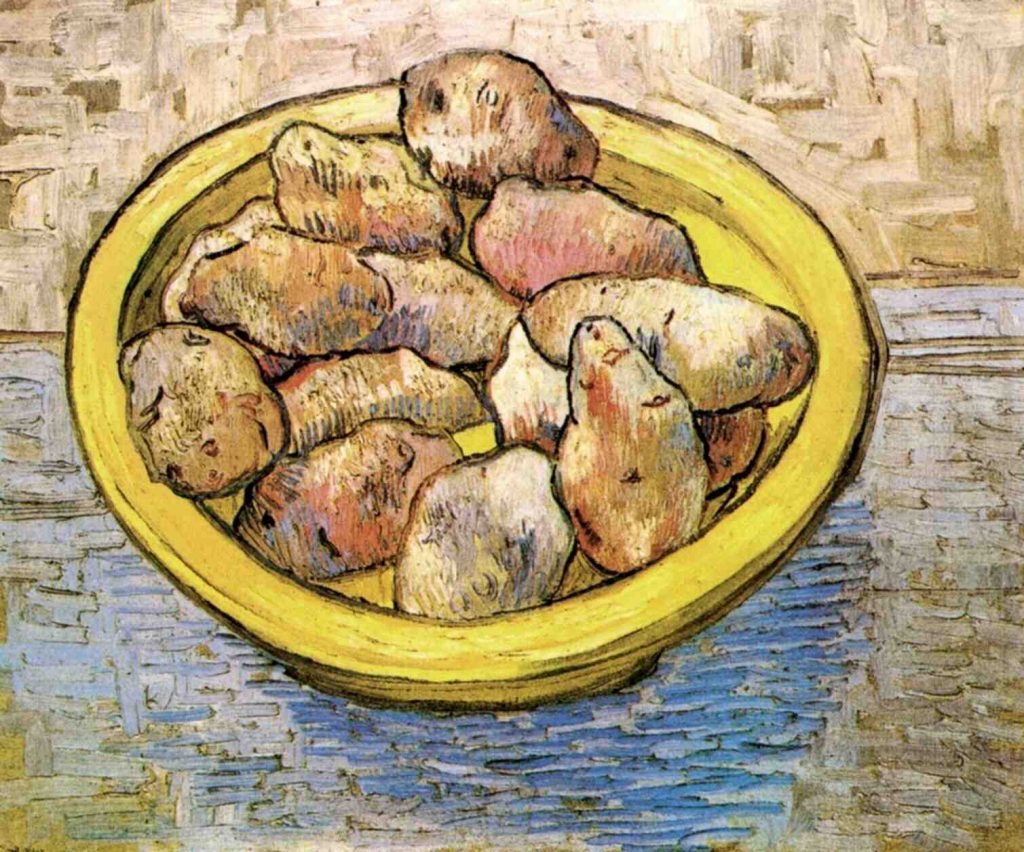 By early March, Vincent was feeling a bit more optimistic, although his efforts were hampered by the mistral or heavy winds common in the area.

Now at long last, this morning the weather has changed and turned milder….I’ve been out on several hikes around here, but the winds always made it impossible to do anything.***

So perhaps Landscape with Path and Pollard Trees was done by Vincent on a calm day, allowing us to enter the barren terrain through his effective use of perspective. 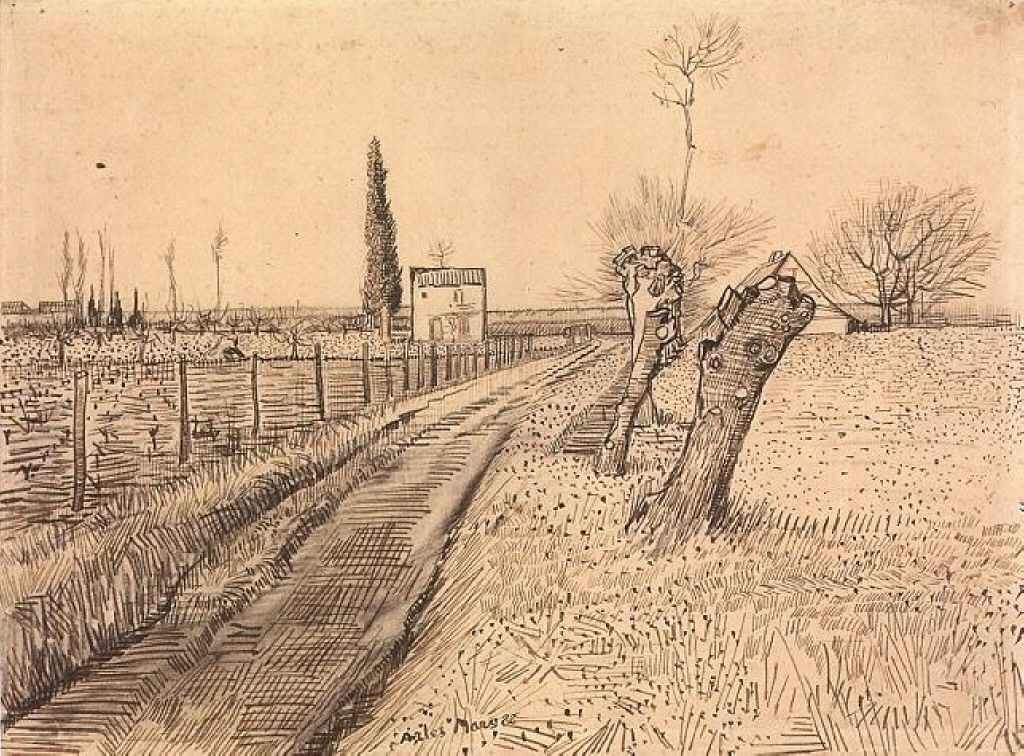 Plus Avenue of Plane Trees near Arles Station was probably created in a rare moment of temperate conditions too, when Vincent could safely prop up his easel without fear of it being blown over by the next chilly gust.  Can you see the train chugging by through the still bare branches? 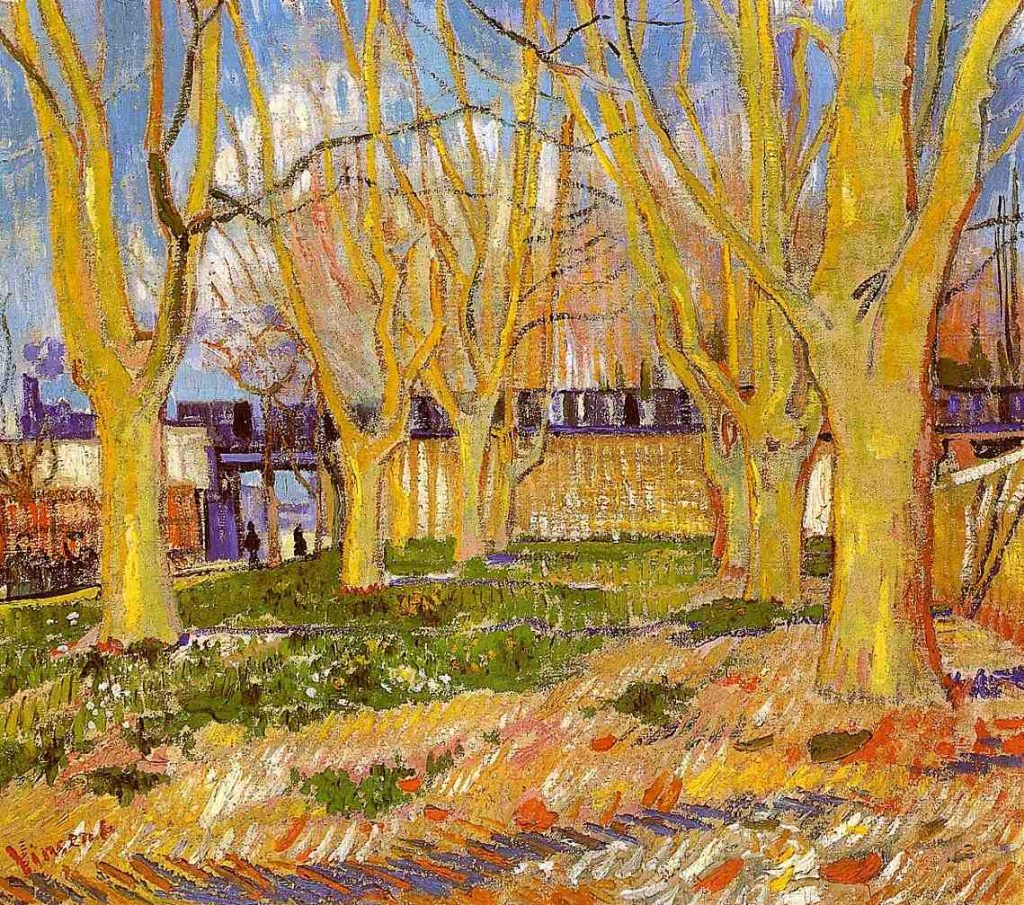 So where did he discover the flowering sprig of Blossoming Almond Branch in a Glass? A proclamation of the coming season, tenderly drawn by Vincent who defines the intricacy of every bud, while only sketching in the glass and table. And above, in the corner, he signs his name in red, reminding us of his presence. 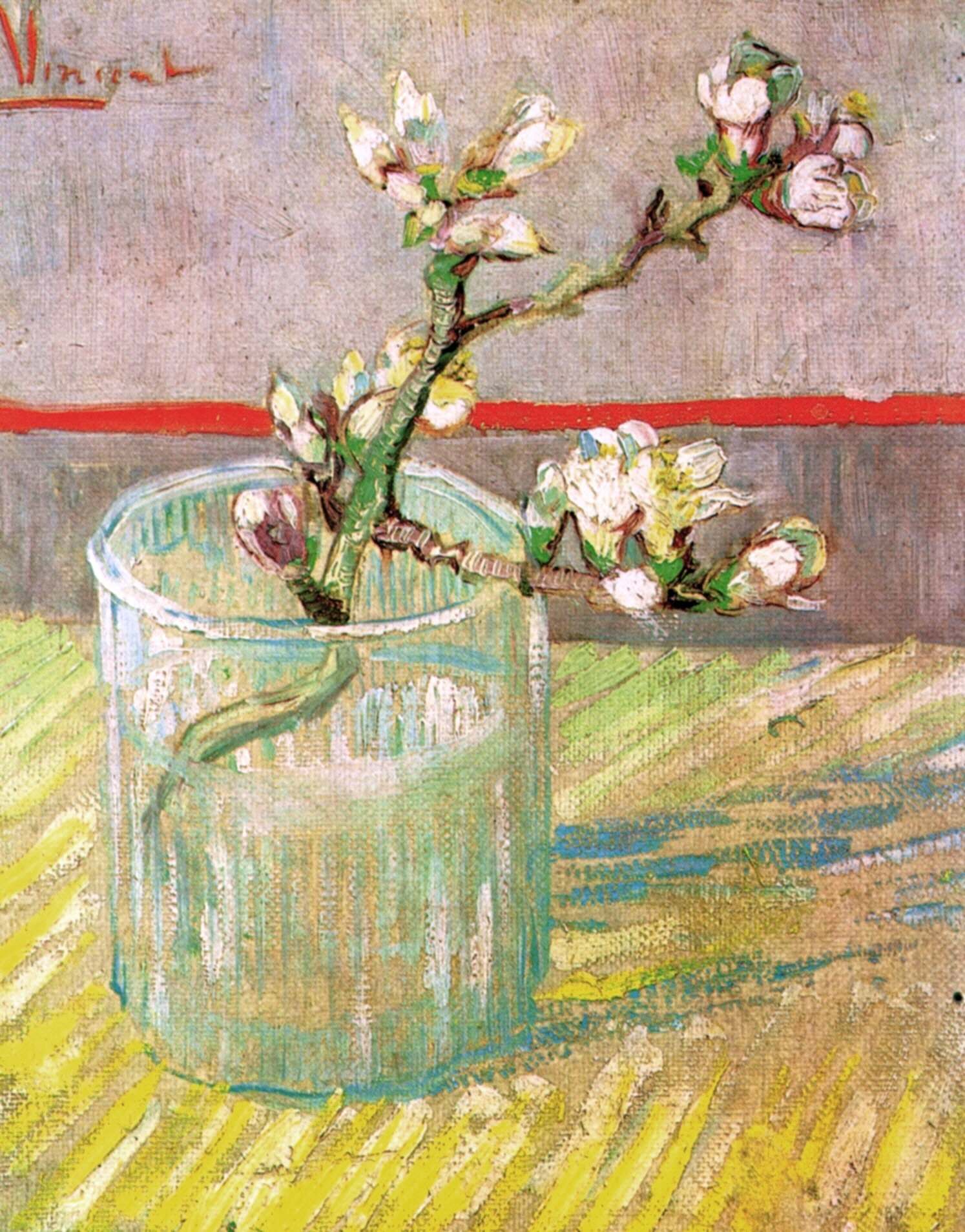 TOMORROW: THE JOURNEY INTO SPRING WITH VINCENT

*Letter to sister Wilhelmina, quoted from The Complete Van Gogh by Jan Hulsker.

Take a walk and expand your horizons with Through an Artist’s Eyes: Learning to Live Creatively.