Click on paintings and photos to enlarge or enhance them.

MONET AND HIS GARDEN—UP CLOSE

How about exploring just one painting today?  To take a journey with me to the National Gallery of Art in Washington, D.C. and stand before Monet’s The Artist’s Garden at Vetheuil through the means of a virtual experience. To imagine ourselves not only within this work of art’s visual space, but participating in the Impressionist master’s creative process. To understand, too, its history as an object of art, particularly a near tragic loss during World War II. 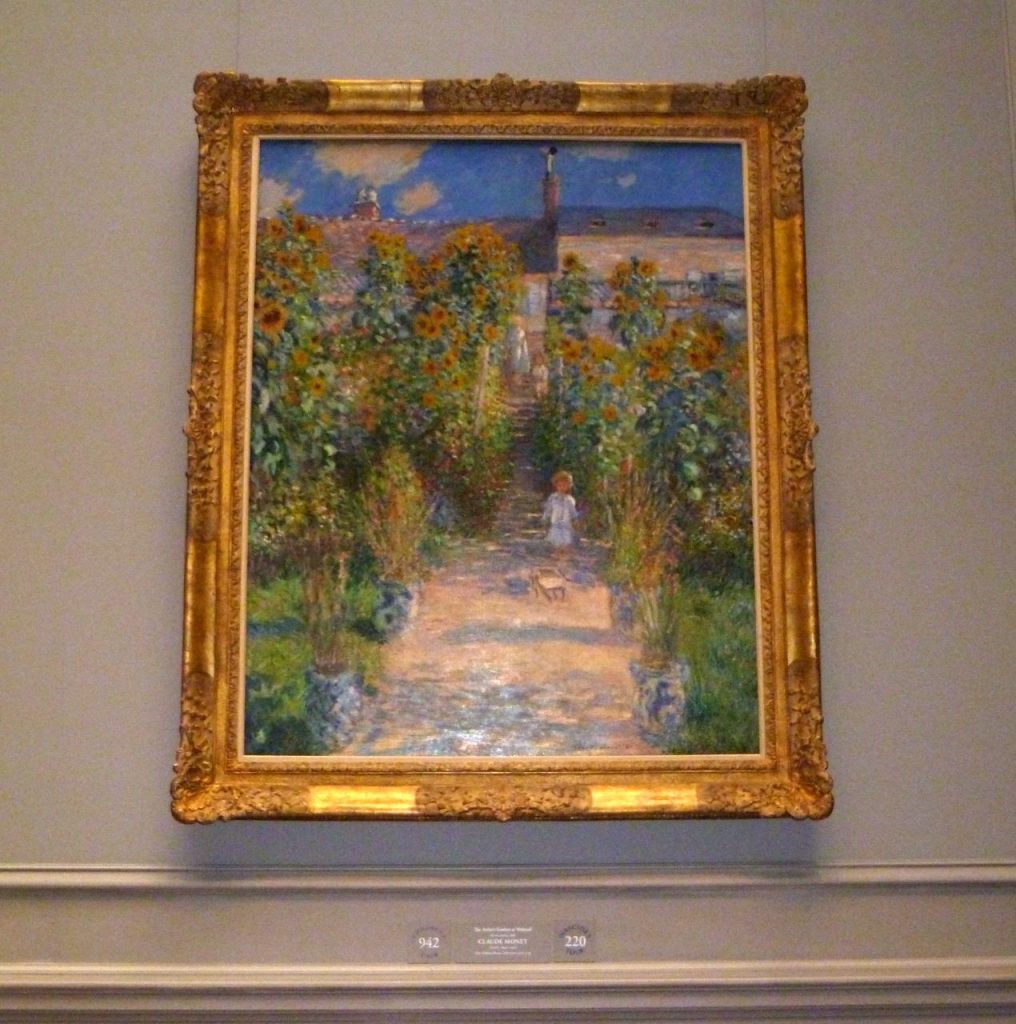 I’ve viewed The Artist’s Garden at Vetheuil innumerable times, on almost every visit to the art museum.  I usually only have an opportunity to  give it a quick, passing glance because I’m on my way to a special exhibition or another section of the collection. Yet, if just for a few minutes, I try to pay homage to Monet’s masterpiece.

For years, it has hung in a room, farther back in the Impressionist wing. Today, though, after a recent reorganization, The Artist’s Garden at Vetheuil occupies a more central place, right off the main corridor—framed on each side by two more of his works, The Japanese Footbridge and Woman with a Parasol (Madame Monet and Her Son).

“Oh, my God, it’s Monet,” I heard a woman exclaim the other day as she entered the gallery, during my last stop over (accompanied by my camera). So perfectly summing up the popularity of his vision with the public evident in the photos below. 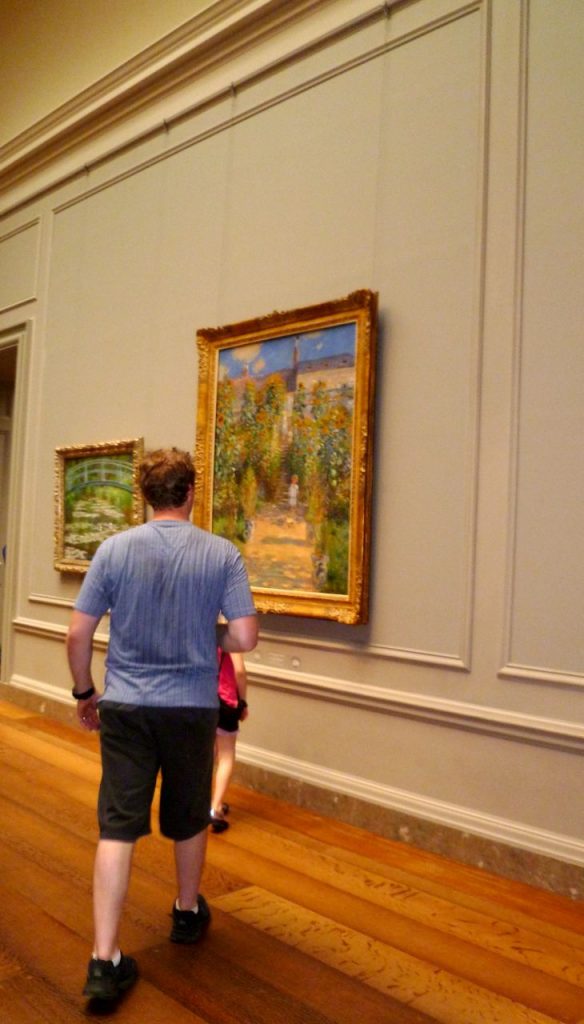 However, Monet probably suffered one of the worst winters of his life prior to the summer of 1880, when he created The Artist’s Garden at Vetheuil.  His wife Camille had died after a long painful illness (possibly of cancer or TB) the previous September, in their home at Vetheuil, some 35 miles from Paris. In addition, Monet’s financial situation was precarious because of a general recession, resulting in a weak market for paintings. And the weather was unusually harsh with freezing temperatures and high levels of snowfall.  Although, the elements did not prevent Monet from painting the chilly atmosphere of Sunset at Lavacourt in January or February, 1880. 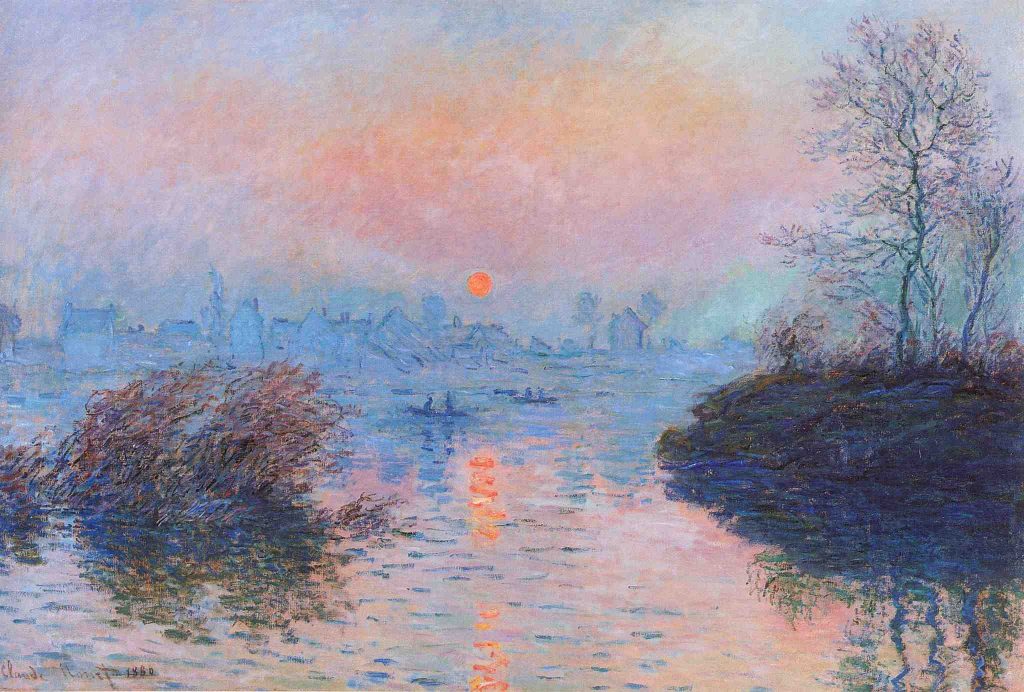 So The Artist’s Garden at Vetheuil might be considered a symbol of rebirth for the artist, sharing with each of us his personal paradise. For how effortlessly Monet allows us to enter his garden, taking us up its pathway of giant sunflowers, where a child waits amidst shimmering rainbow colors.  Is the sunshine, intensified by the deep azure sky above, so bright that we have to squint our eyes?

But try not to be overwhelmed, relax, and search your surroundings.  Is it the maze of sunflowers that catches your eye first?  Many blossoms have distinct faces, mostly brown and orange toned. Though some are also blurred, especially on our right, as if being melted by sun.  Or is it the wind blowing?  Other types of flowers, too, weave in and out like the threads of nature’s tapestry—reds, pinks, or whites–mainly unrecognizable. Encircled by layered shades of green, blue, and turquoise leaves that abound, growing freely, merging into one another.

Contrasting patches of light and shade illuminate the walk rising gradually before us.  Start your ascent at the edge of the painting, stepping through the shadows lying under your feet.  Not solid black but a mix of broken blue-gray-green and other colored pigments, falling unevenly on the pastel surface,  While Monet’s favorite china vases decorate each side, planted with tall flowering stalks.

Keep moving straight ahead, although be careful of the toy wagon. Shouldn’t you stop to to play with Michel, Monet’s youngest son, who has been watching your progress? Or at least pause to talk?  Or are you compelled to continue to climb, barely navigating the narrow steps, overgrown with vegetation?

However, your way is permanently blocked by Michel’s companions, a woman and boy; faceless figures, their features dissolved by the sun. If you look closer, you can just discern that she’s holding a broom. perhaps intent on sweeping away any intruder.  Then directly behind her, a shuttered window further obstructs your route into the family’s house.

For why would anyone want to be inside on such a perfect day?

BRUSHSTROKES: THAT TOUCH OF GENIUS

The intricacy and depth of Monet’s brushstrokes in The Artist’s Garden at Vetheuil are outstanding; he utilizes a spectrum of colors, applied sometimes thinly, then thickly, moving across the canvas with energy and emotion. Just connect to  the National Gallery of Art link below, initally click the overall image, which will take you the next page. Then keep clicking on the + sign to magnify details which you could only see in the museum.

THE ARTIST’S GARDEN AT VETHEUIL, AGAIN AND AGAIN

Monet prided himself on setting up his easel and painting directly on location.  Yet, the complexity of the brushwork in The Artist’s Garden at Vetheuil  must have also involved intensive hours of labor back in his studio. Plus 3 more views of  his garden from a similar perspective exist including the version below.

By 1880, Monet was increasingly producing multiple canvases of the same site, laying the foundation for his Haystack and Cathedral series done during the 1890s. 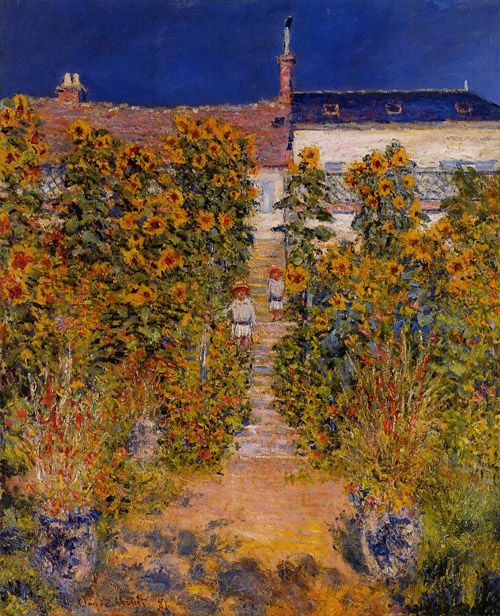 I’ve often wondered why Monet did not sell The Artist’s Garden at Vetheuil for 30 years, although he did show it at an exhibition in 1899.  Did the painting have some special meaning or value to him?

It’s first major owner was Rene Gimpel (1881-1945), a Parisian art dealer, who seems to have acquired the work around 1910.  Born in 1881, Gimpel lived during the cultural renaissance of La Belle Epoque, associating with an impressive circle of artists and writers such as Monet, Marcel Proust, and Picasso.

Among his accomplishments was the establishment of an extensive collection of art that included several Monets. But with the advent of World War II, these works were threatened by the German occupation of France. Gimpel did manage to rescue a small percentage of his paintings including The Artist’s Garden at Vetheuil, but he could not save himself.  As a member of the Resistance, he was arrested and imprisoned in a concentration camp where he died in 1945.

AILSA MELLON BRUCE: HER GIFT TO THE WORLD

Ailsa Mellon Bruce (1901-1969) was in her early sixties when she bought The Artist’s Garden at Vetheuil in 1961.  The daughter of  millionaire Andrew Mellon, U.S. Secretary of the Treasury and a founding benefactor of the National Gallery of Art, she, like her father, also donated generously to the art museum.  For instance, she helped fund the purchase of  American Art and aid in the the acquisition of Old Masters as well as Ginevra de Benci, the sole Leonardo da Vinci in the United States.  Then at her death in 1969, she gave The Artist’s Garden at Vetheuil, along with a large bequest of other priceless paintings to the museum.

Click the following link for more information on the work’s provenance.

National Gallery of Art, Information on The Artist’s Garden at Vetheuil. 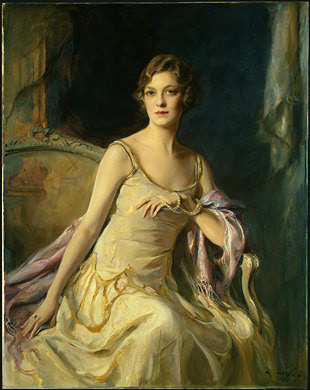 Several sources were utilized for this blog including the website of the National Gallery of Art, Washington, D.C. and books on Monet.

And take a walk with Monet in Through an Artist’s Eyes: Learning to Live Creatively!