Published from an earlier date.

No other artist is so closely identified with a flower, except perhaps Georgia O’Keeffe and the poppy. Other artists have contributed to the sunflower legacy in art.  For instance, Claude Monet’s Bouquet of Sunflowers, done about 1881, predates Vincent’s series by 7 or 8 years. This exuberant gathering below, boldly brushed with Impressionistic bravura, reaches upward, clearly expanding beyond the constraints of its Japanese vase—warmly welcoming any visitor who enters the room. 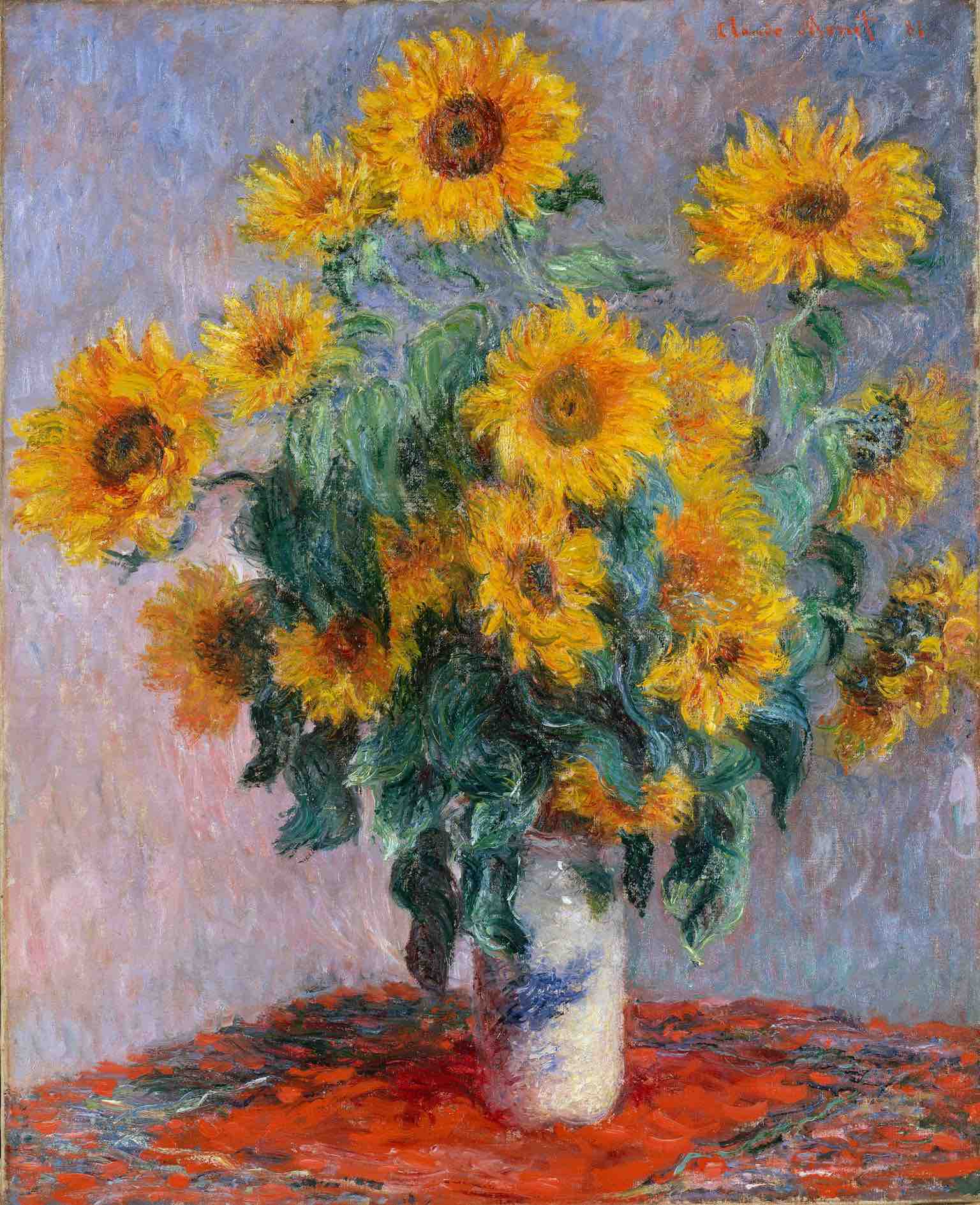 While Monet’s Impressionist colleague Gustave Caillebotte, in Sunflowers on the Banks of the Seine, enables us to experience sunflowers in their natural environment. 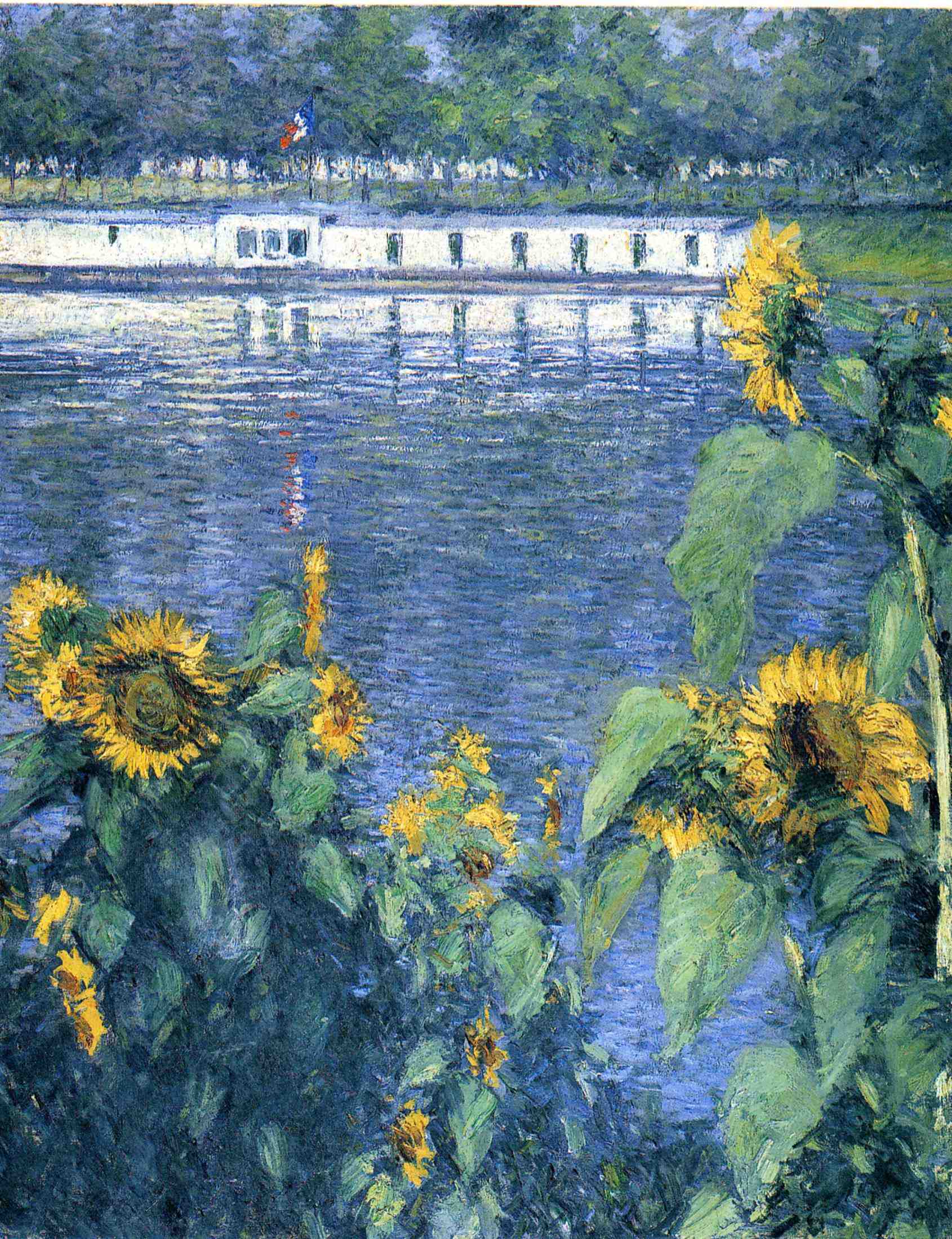 And another member of the Impressionists, American Mary Cassatt, who generally concentrated on depicting people rather than flowers, included a prominent sunflower on her model’s gown in Mother and Child.  Is it real? 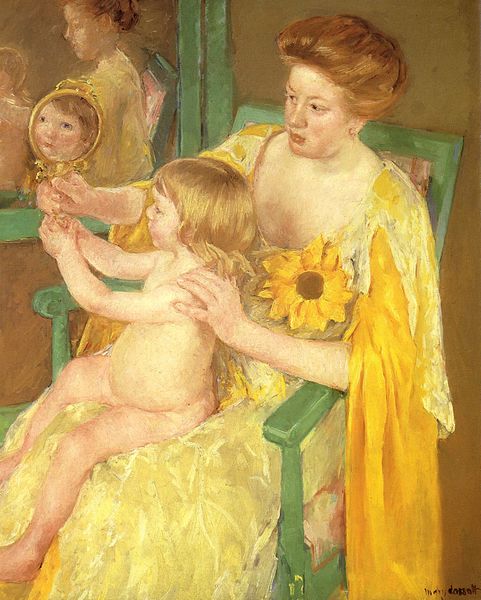 But why are Vincent’s sunflowers so compelling?  Before we explore Van Gogh’s masterpieces, it might be fun to take a look at a few photos of some “real” sunflowers in my backyard.  Did you know that 52 species exist?  Unfortunately, I discarded the packet so I’m not quite certain of the type I planted. Except that they are definitely more modest in size and appearance than Vincent’s subjects.

I have to confess, too, that I almost inadvertently eliminiated them.  In my ignorance, I thought they were weeds when their stalks began spreading rapidly in my garden. Then, for some reason, before I weeded all of them, I spared the few lucky survivors pictured below.

I’ve learned how quickly they grow, concealed initially within a swirling, complex mass of protective green. 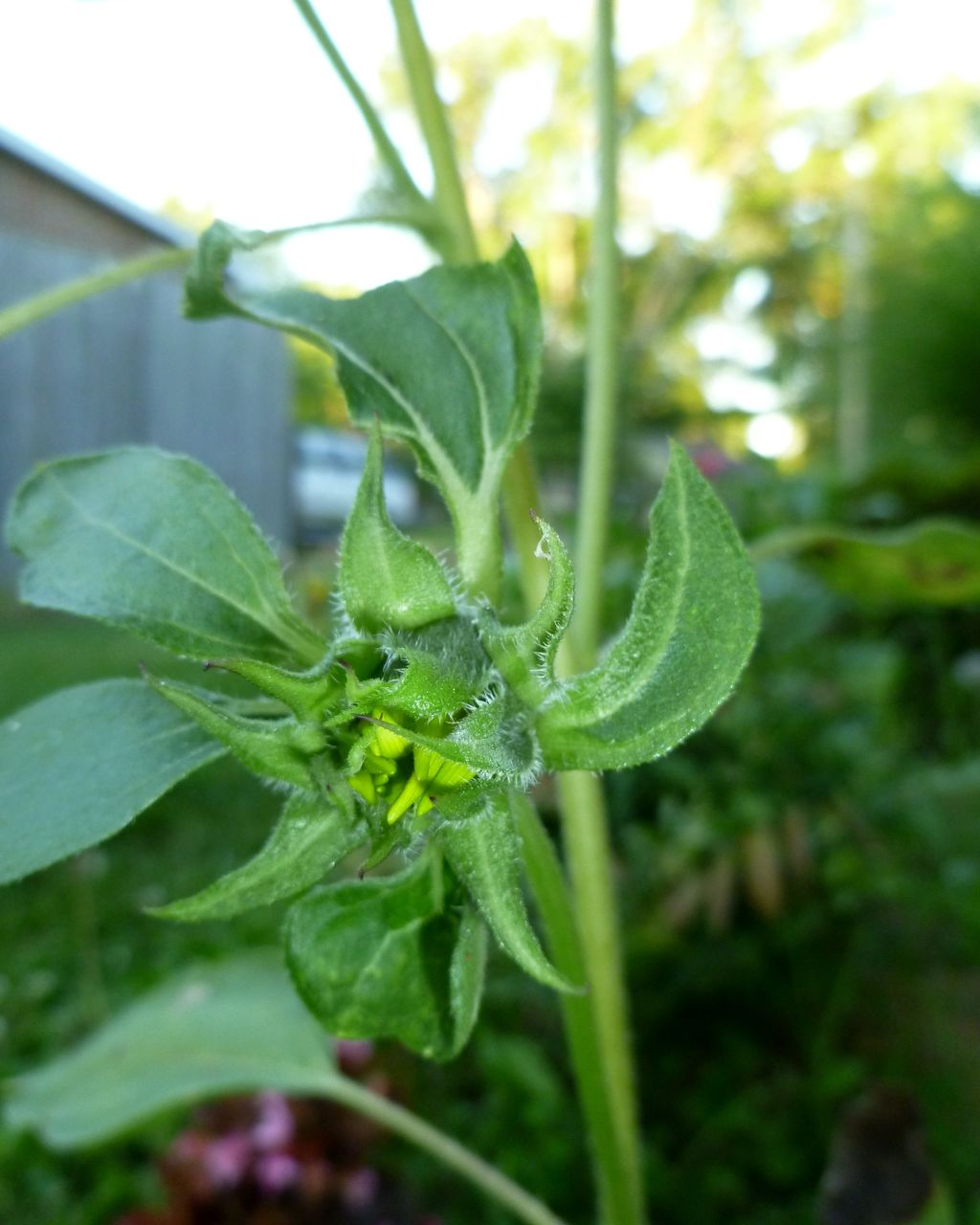 Soon emerging, uncurling, into the next stage. Supported by an arrangement of spiky leaves acting as nature’s defense system. 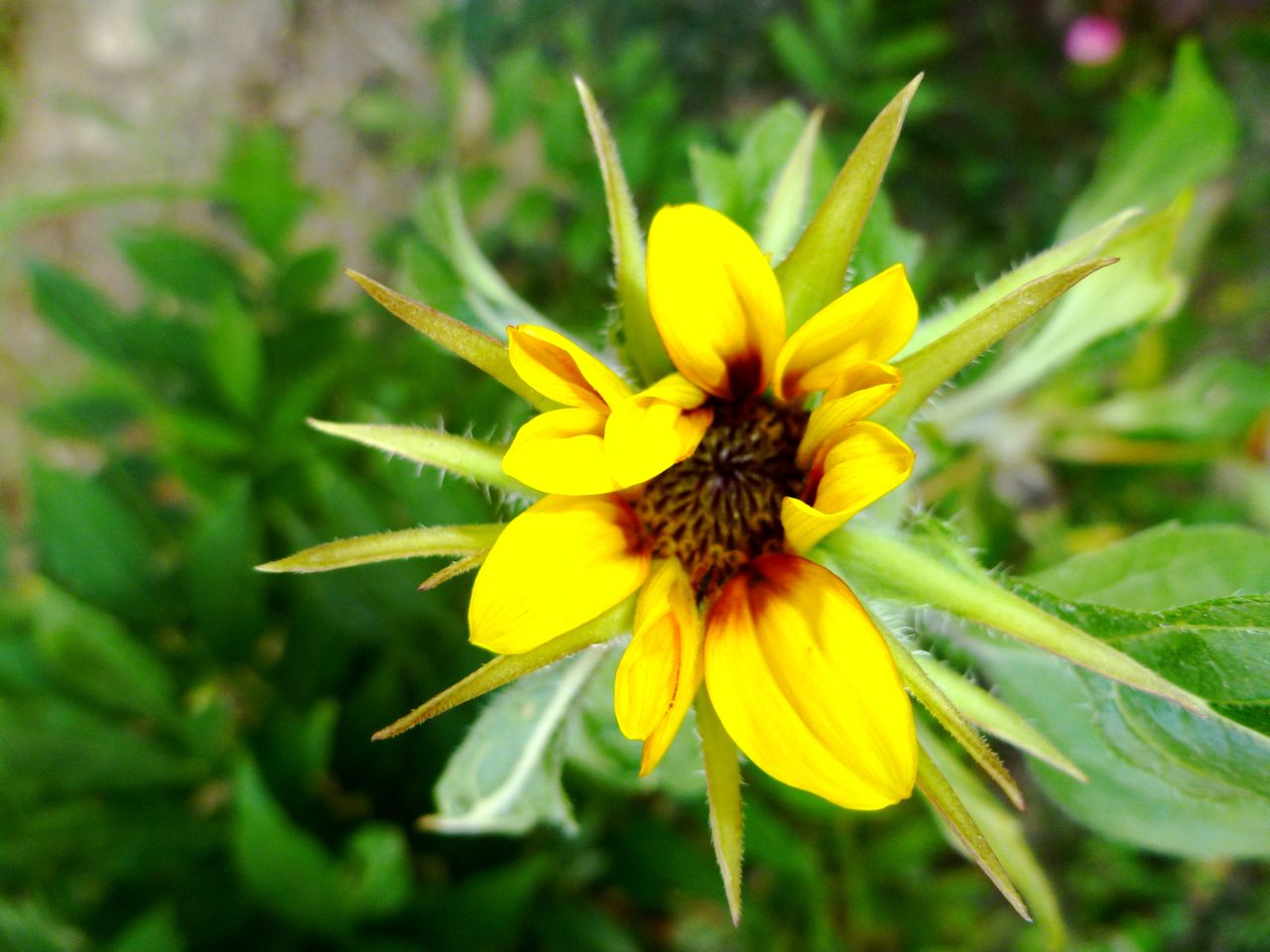 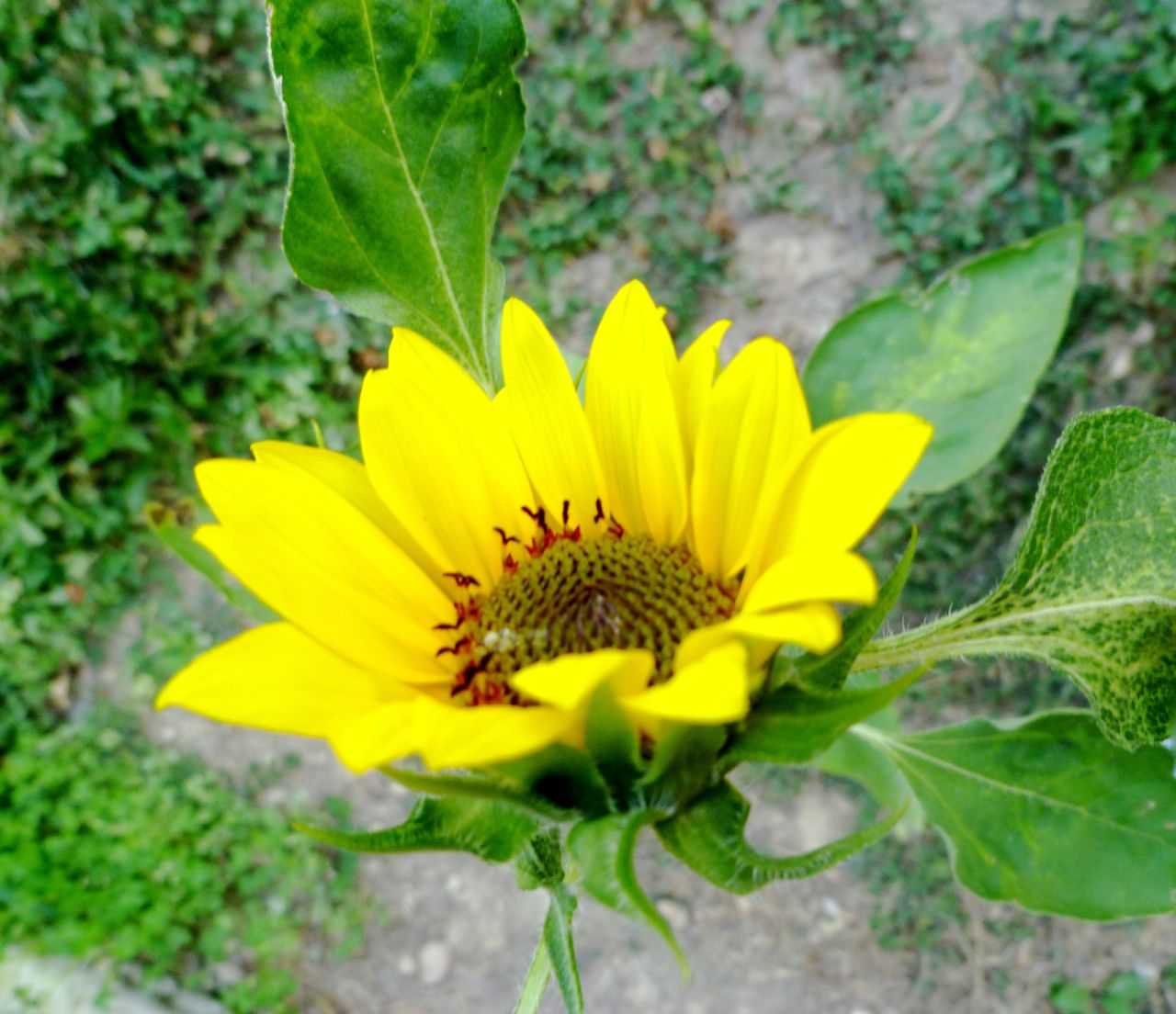 Until the sunflower proudly displays itself—a jewel in the early morning sunlight. 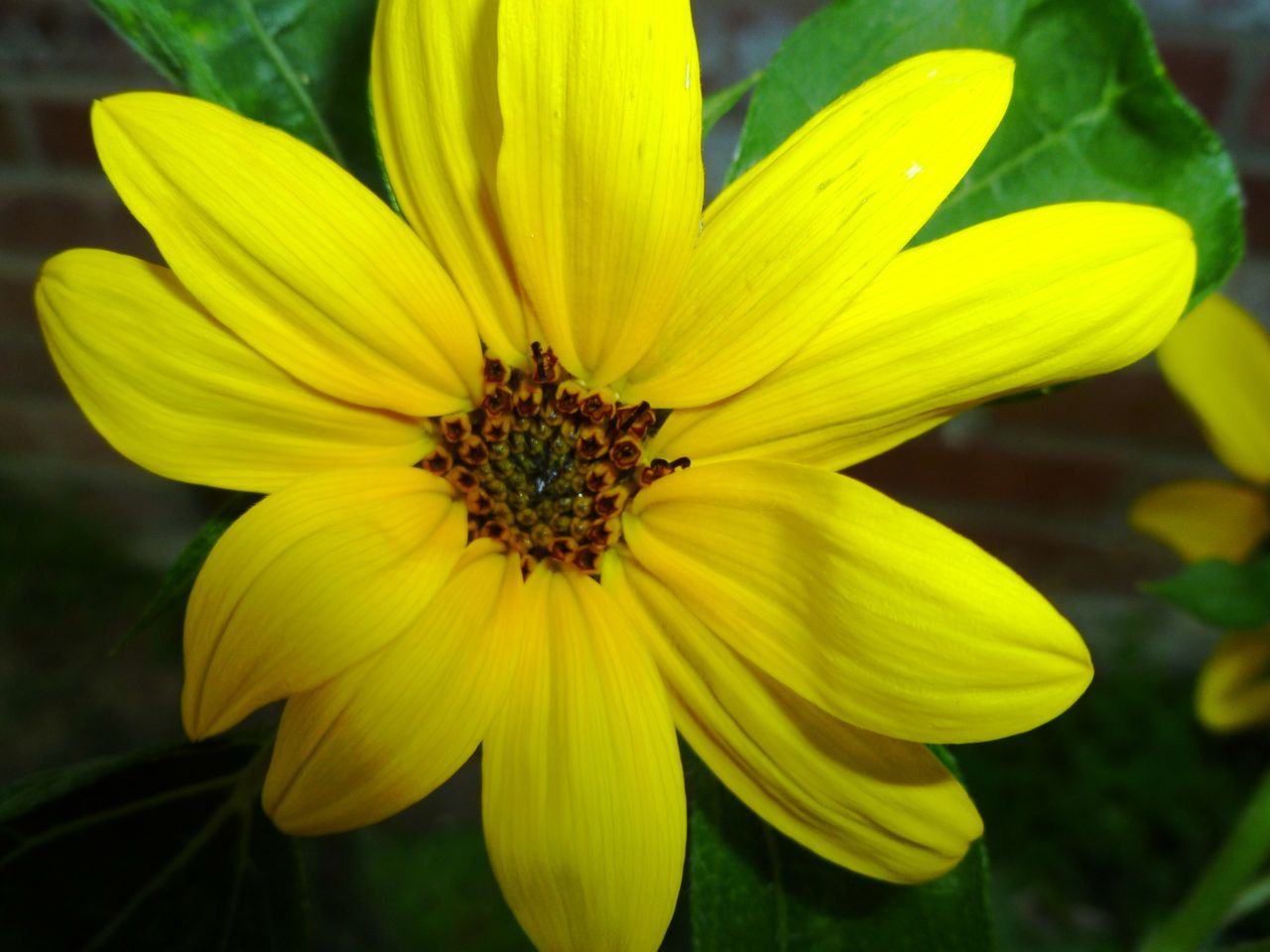 I did discover a more exotic brand selling at a street vendor’s stand in downtown Washington, D.C.  (Do you like the impressionistic touch?) 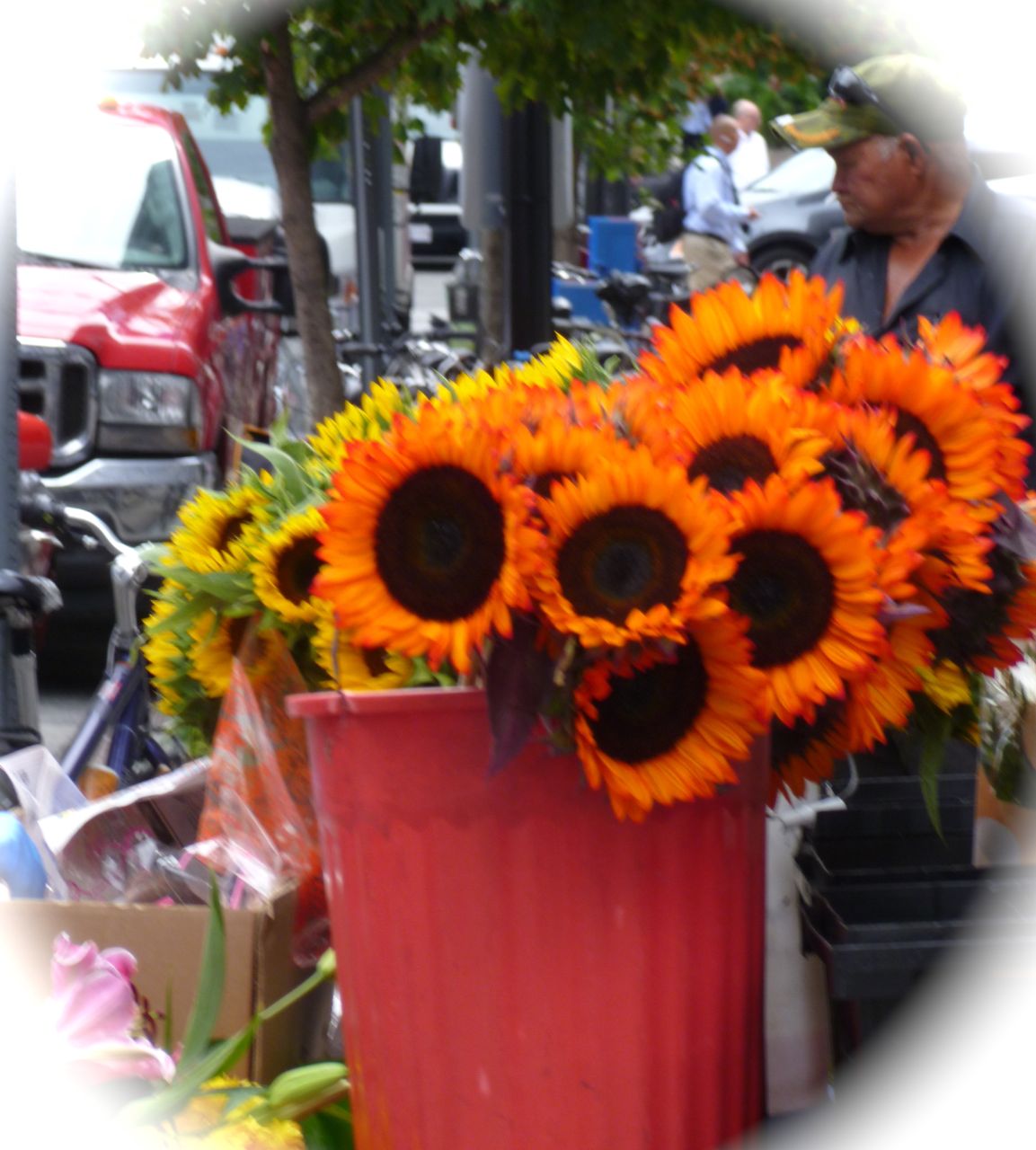 I prefer, though, my home-grown version, particularly the ingenious design of its face, reminding me of some of Van Gogh’s sunflowers. 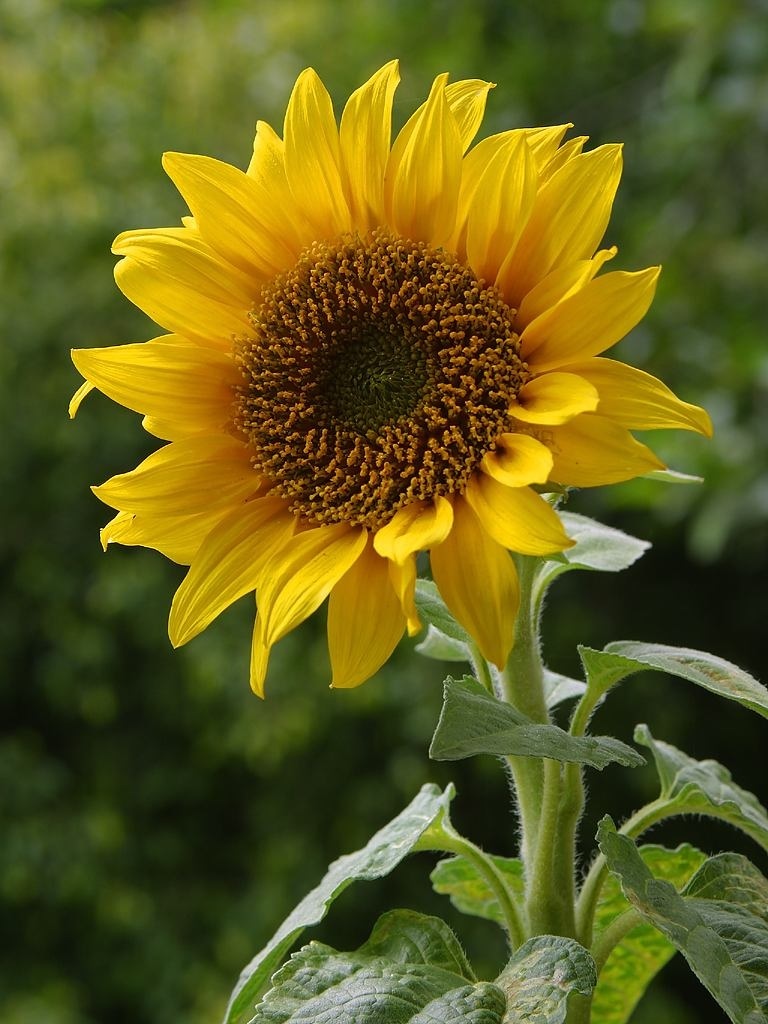 Can you see the resemblance especially with the top flower of Three Sunflowers in a Vase,  which Vincent considered the first canvas of  his sunflower quartet, begun in late August 1888?  I’m painting with the gusto of a Marseillais eating bouillabaisse, which won’t surprise you when it’s a question of painting large sunflowers,* he wrote to his brother Theo around August 21 from Arles, France. His goal was to decorate his studio with about a dozen panels, creating what he described in the letter as a symphony in blue and yellow.*

In 1887, Vincent had previously produced at least four paintings  of sunflowers lying on on the ground (two of which he then traded with artist and future roommate Paul Gauguin).  However with Three Sunflowers in a Vase, the smallest in dimension, he began to discover the  relationships between the flowers in a more confined space indoors. For don’t they seem like  three friends, clustered together in their humble vase? The lower two a bit worn and tired, in contrast to their more lively companion, still climbing toward a now non-existent sun. 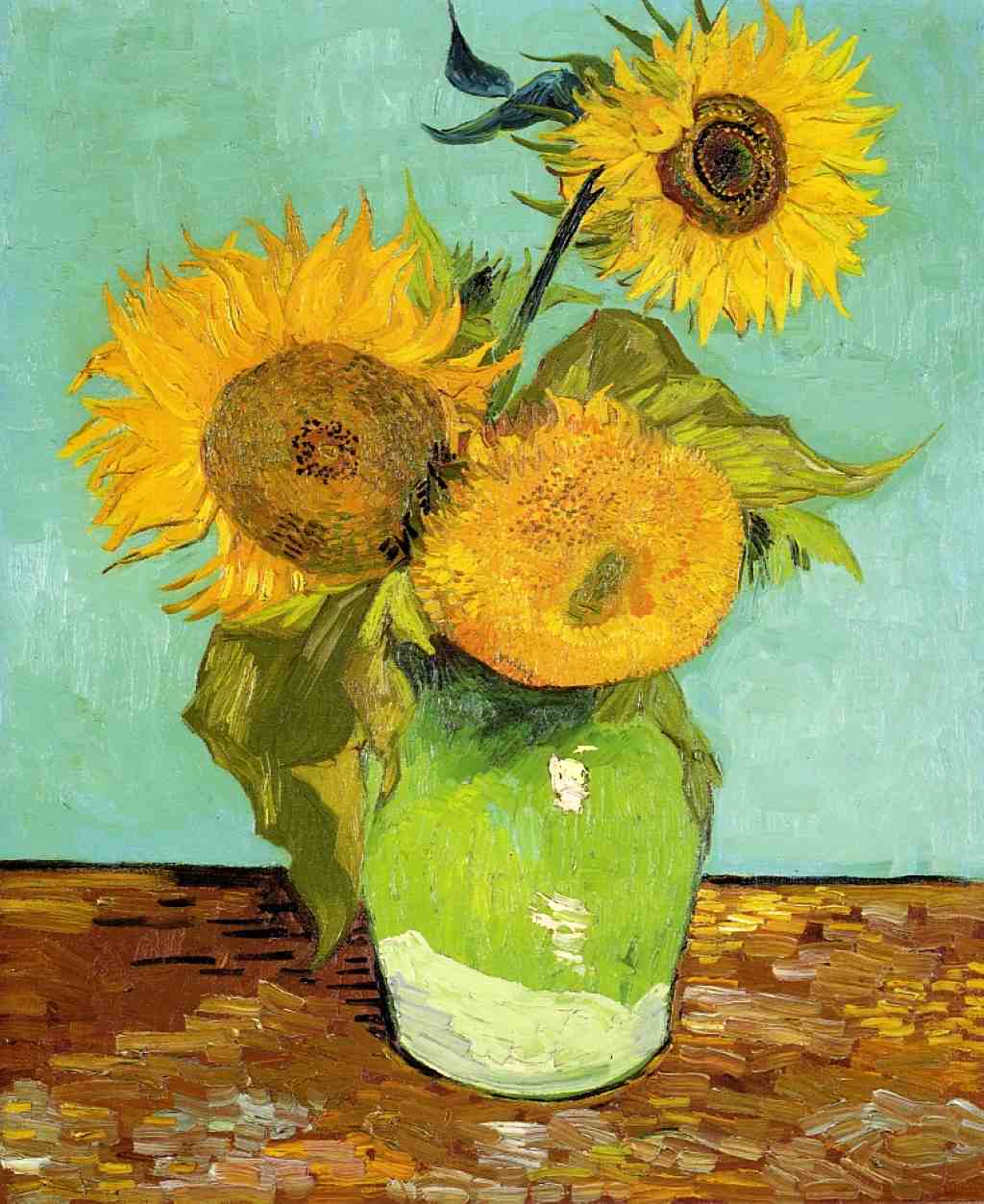 Whereas the second Sunflowers in a Vase has an almost otherworldly quality, as if Vincent were already anticipating his visionary Starry Night.  Here the artist has achieved what he called a ‘halo,’ that’s to say, each object is surrounded by a line of the colour complementary to the background against which it stands out.** Or in other words, the orange outline around each flower contrasts to the royal blue wall producing a striking effect. Sometimes referred to as 5 Sunflowers in a Vase, you’ll notice that 3 are placed outside, if you count the immature bud; so in that case the total would be 6.

Once owned by Koyata Yamamoto, this mysterious work of art has been lost forever, destroyed in an aerial bombing of Yokohama during World War II. 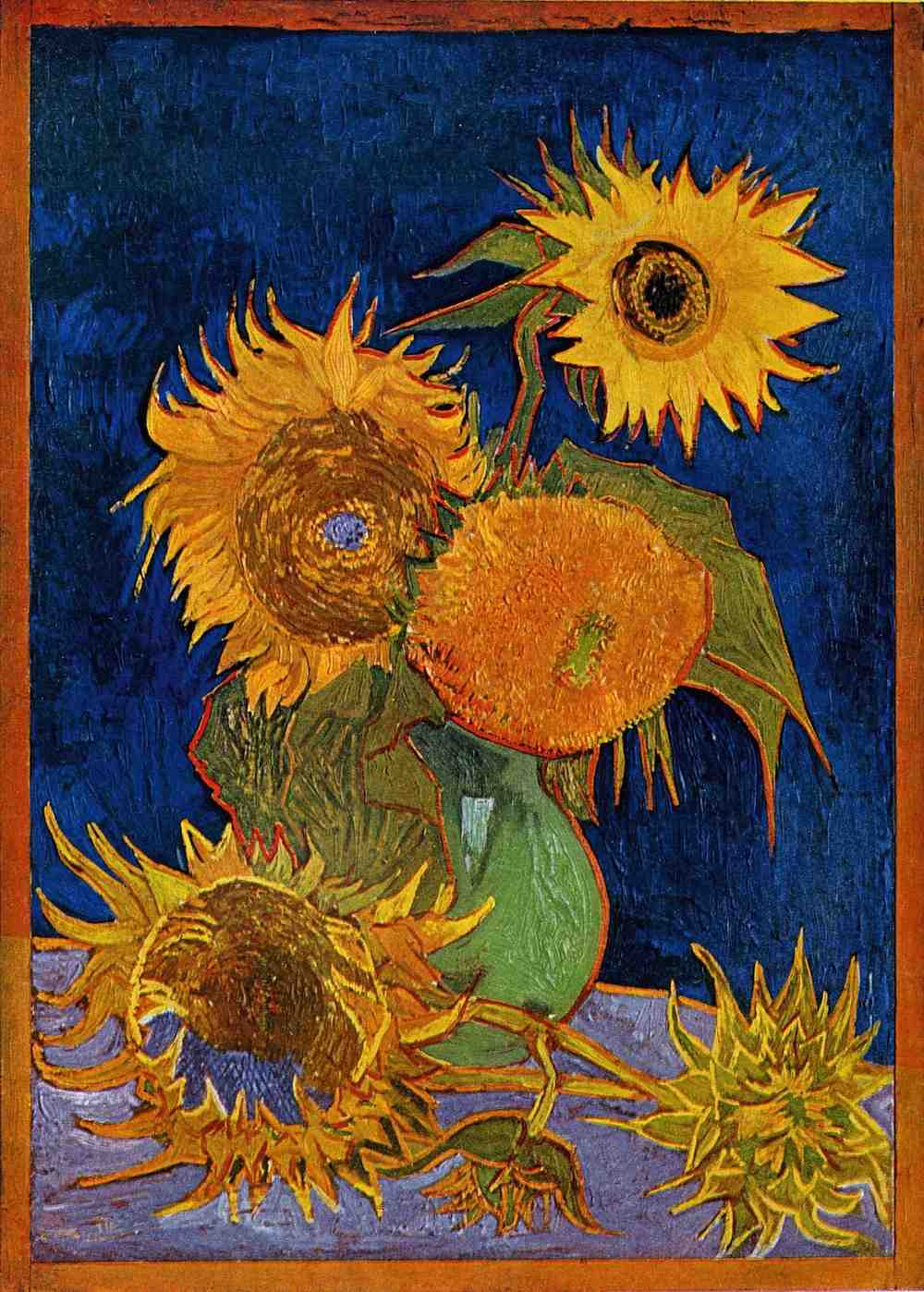 NEXT: THE FINAL TWO SUNFLOWERS PAINTINGS (& A FEW COPIES)

This blog is based on research from Van Gogh and Gauguin: The Studio of the South by Douglas W. Druick and Peter Kort Zegers (in collaboration with Britt Salvesen), Thames and Hudson as well as The Art Institute of Chicago and Van Gogh Museum, 2001 and the web site Van Gogh Letters.

PLEASE SCROLL DOWN FOR THE PRECEDING BLOG.