Today were are experiencing the pandemic of the coronavirus. However, sometimes, in moments of crisis, an artist will actually summon his greatest powers of creativity.  Edward Hopper’s iconic NIGHT HAWKS is one of the results, done in the period shortly after the attack on Pearl Harbor in December, 1941. In September, 2014, I posted a blog about the evolution of this masterpiece; I thought it might pertain to our own time.

Ed has just finished a very fine picture—a lunch counter at night with 3 figures.
Night Hawks would be a fine name for it.

Have you ever wondered why Edward Hopper’s Nighthawks, created more than 70 years ago, is an icon today? Not only recognized as a great work of art, but also as a symbol of popular culture? Yet what constitutes a masterpiece?  What are the criteria? Or is it even possible to determine?

I’ll be exploring this theme with Nighthawks, the star of our virtual exhibition below.   I’ll be repeating it throughout the blog with other paintings and photographs, as we GO INSIDE what the usually understated Hopper described as one of the very best things I have painted…….*

I’ve tried to summarize as well as highlight the history, creative process, and elements of style of Nighthawks, offering you guidelines to follow independently so that you can discover your own answers. 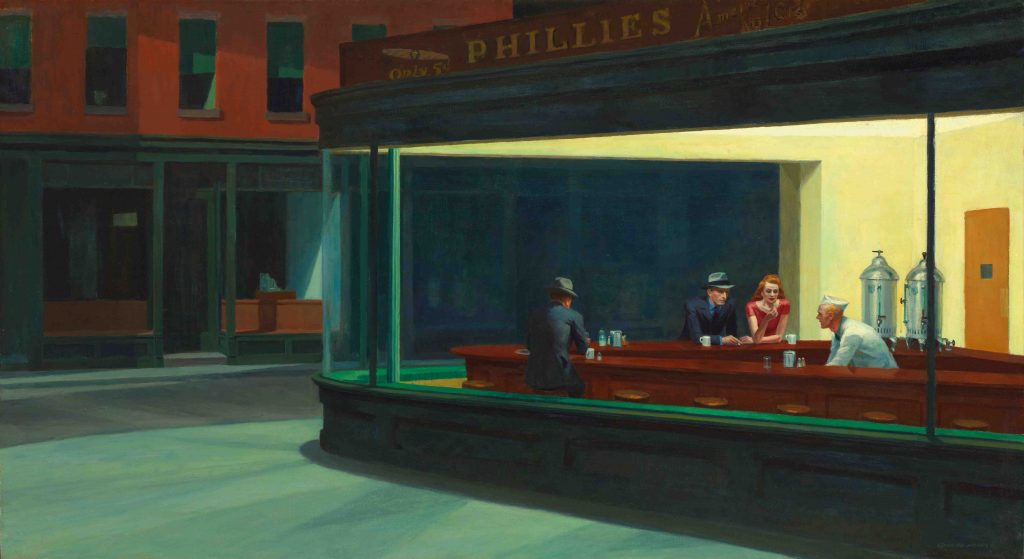 American 20th century master Edward Hopper  was a New Yorker, residing at 3 Washington Square in Greenwich Village from 1913 to his death in 1967.  Born in 1882 in Nyack, along the Hudson River, he attended both commercial and fine arts schools in the nearby city as well as studying in Paris. Initially earning his livelihood as an illustrator, he was eventually able to work full time as a professional artist. By 194l, when he began Nighthawks, he had already produced several works reflecting the urban scene he knew so well such as Early Sunday Morning, New York Movie, and Office at Night. 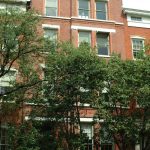 Ed refused to take any interest in our very likely prospect of being bombed—and we live right under glass sky-lights and a roof that leaks whenever it rains.  He refuses to make for any more precautions and only jeers at me for packing a knapsack…in case we ran to race out doors in out nighties….For the black-out, we have no shade over the sky light…. but Ed can’t be bothered.  He’s doing a new canvas and simply can’t be interrupted!

Shortly after the December 7 Japanese attack on Pearl Harbor, Jo Hopper complained to her sister-in-law Marion about her husband’s behavior.  While most of his fellow New Yorkers prepared for war, Hopper was consumed with Nighthawks instead. 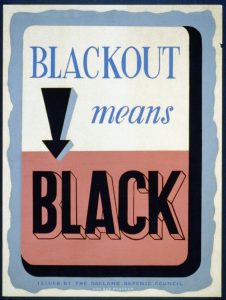 Why was Hopper compelled to complete Nighthawks during this period of national emergency? Since returning from his summer home on Cape Cod in early November, the artist had not been able to concentrate. Then within a month–by the third week of January–he transformed the blank canvas that had been lingering in his studio into his most famous painting.

Was Van Gogh’s 1888 Night Cafe a catalyst for Hopper’s Depression-era diner?  Owned by collector Stephen Clark, it had hung in two exhibitions, in which Hopper’s works had also been shown. Then while Hopper was working on Nighthawks, Vincent’s Night Cafe was again on display in New York.  Did Hopper, its avid admirer, stop by for another viewing? 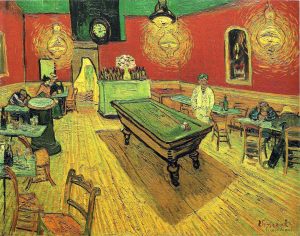 THE ART OF THE COFFEE URN

At least 19 examples remain of  Hopper’s preparatory drawings for Nighthawks, ranging from overall designs to individual figure sketches to studies of salt shakers, sugar dispensers, and coffee urns which are mainly collectibles now.

E. & I did all the posing for figures except the young blond boy in charge of the counter & he is practically ‘Capt. Ed Staples,’ dreamed up by Ed himself & perished with a car load of modern masterpieces in a R. R. accident.

Jo Hopper, an artist herself, collaborated with Hopper in organizing the theater-like sets as well as modeling for the players at the core of their studio mini-drama staged for Nighthawks.  Here’s a description of the cast of characters by Jo. 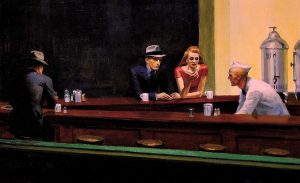 THE COLOR OF ELECTRICITY

Although Thomas Edison may have invented electricity, Hopper introduced its beauty and luminosity into art. Because artificial light is the essence of Nighthawks, illuminating the blackness of the hours between midnight and morning in the metropolis that never sleeps. Where color too has a radiance, enhanced by the glow of then cutting edge technology, as described by Jo.

However, the exterior is dimmer.  According to Jo: 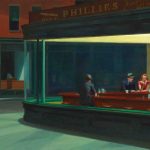 Hopper was a movie buff, watching the latest flicks for hours at the local cinema, often as a distraction from his daily worries or a creative block.  His tastes were eclectic, ranging from musicals to Westerns to crime dramas, known as film noir. Nighthawks has been associated with this genre, popular during the 1930s and 1940s.  Do you see the connection?

Ernest Hemingway’s The Killers, a favorite short story of Hopper’s, might have influenced Nighthawks as well. Originally published in 1927, it was the basis for a 1946 Universal Studios production, featuring two newcomers Ava Gardner and Burt Lancaster. 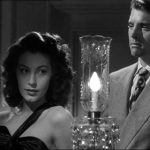 Numerous art historians and critics have speculated about the meaning of Nighthawks.  But Hopper provides the most intriguing interpretation of his creation.  When asked in an interview  about the feeling of loneliness in the work, he replied:

I didn’t see it as particularly lonely.  I simplified the scene a great deal and made the restaurant bigger.  Unconsciously, probably, I was painting the loneliness of a large city.**

Hopper never did reveal the exact site of Nighthawks, only that it was suggested by a restaurant on Greenwich Avenue where two streets meet.***

So the search continues……….

Nighthawks was quickly purchased by The Art Institute of Chicago in May, 1942. The price was $3,000, but the museum returned Hopper’s Compartment C, Car 293, already in their collection, to the artist as part of the payment.

The reproduction of Nighthawks utilized in this blog is in the public domain.