Please click on the photographs to enlarge or enhance them.

PRELUDE TO THE LINCOLN MEMORIAL

IN COMMEMORATION OF THE GETTYSBURG ADDRESS

To honor the 151st anniversary of the Gettysburg Address, I will be presenting highlights of Daniel Chester French’s statue at the Lincoln Memorial on Wednesday.  However, as a prelude I’ve organized a virtual mini-gallery of Abraham Lincoln photographs, a documentation of the extraordinary passage of the American leader from an aspiring congressman to the legend and martyr.  For his face, particularly in the later years of the Civil War, is often like a work of art, as interpreted through the lens of pioneering American photographers Matthew Brady (1822-1896) and Alexander Gardner (1821-1882), among others.

Note: the photographs are much clearer when you click on them.

A FRESHMAN IN CONGRESS

In this earliest known photograph of Lincoln taken about 1846 or 1847, he had been recently elected to the U.S. House of Representatives from Illinois, pledging to serve one term. Doesn’t he seem quite formal, with his well groomed hair and three piece suit?  Confident, too, and amibitious—at 37, his resume is already impressive for a once poor boy from Kentucky: captain in the Black Hawk War, postmaster, surveyor, lawyer, and member of the state legislature. 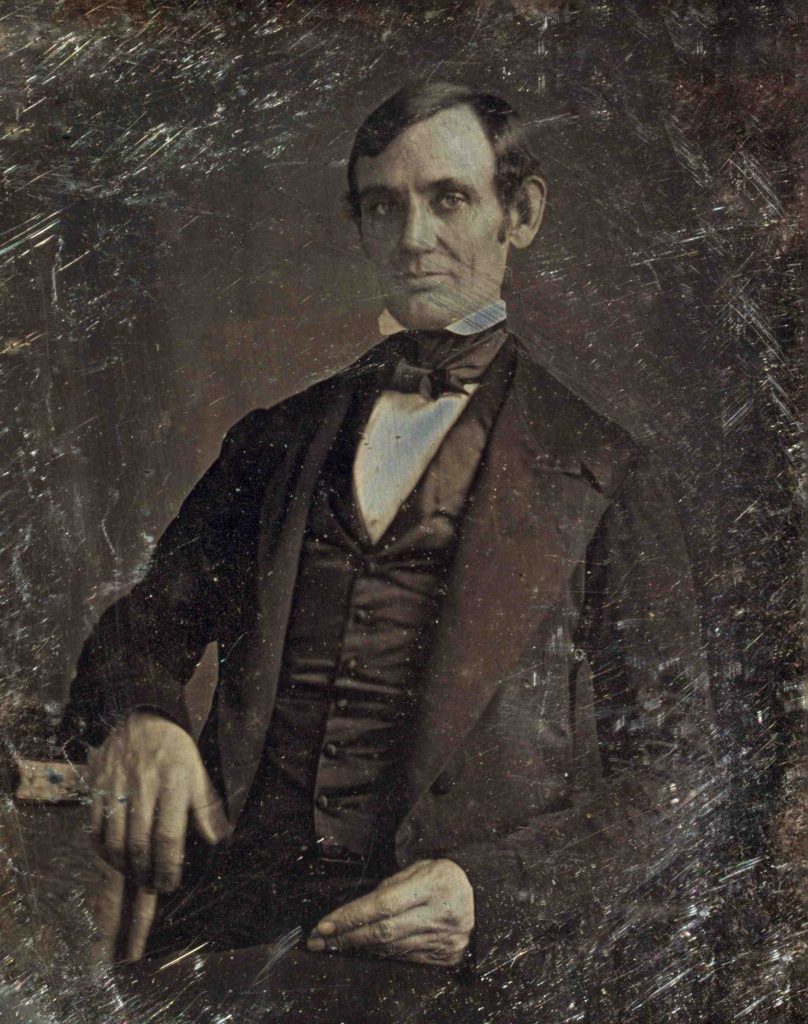 If LIncoln could speak to us now, what would he say? For his gifts of oratory and stand against slavery propelled him to national prominence during  the LIncoln-Douglas debates, part of the Illinois senate campaign of 1858 (the date of this photograph). The directness of his gaze is almost startling, rare among politicians, connecting with us despite the difference between our centuries. Was he truly “honest Abe?”

The weight of the presidency is already upon him, although Lincoln had only just been nominated for the office at the Republican National Convention held in spring, 1860.  Gaunt and aging, a sadness, perhaps resignation, clouds his expression.  Reminding us of an eagle peering out from his pronounced eyebrows into an uncertain future.

THE BRINK OF WAR

On April, 6,1861, the newly inaugurated Abraham Lincoln, posed for photographer Matthew Brady in Washington, D.C. He had grown a beard on the advice of 11 year old Grace Bedeel who had written in a letter you would look a great deal better for your face is so thin. Yet here LIncoln might frighten almost any child. Do you detect hostility, or at least a mistrust in his attitude?  Was the pressure of the coming war the cause? Because in 6 days, Fort Sumter would be attacked by Confederate forces, signaling the start of the bloody conflict.

While on August 9, 1863, in a session with Brady’s colleague Alexander Gardner, Lincoln is reflecting on the tragic events that have occurred in the more than 2 years of his administration. Although the battles of Gettysburg and Vicksburg have just been won by Union troops, loss is uppermost in his mind—whether the killing of thousands of Americans or the death of his young son Willie from typhoid fever.

A NEW BIRTH OF FREEDOM

However, Lincoln’s resolution and resolve to preserve the Union, returns in this famous photo also executed by Alexander Gardner a few months later on November 8.  In over a week, the president would be presenting the Gettysburg Address at the November 19th commemoration ceremony. Was he already envisioning the core of his speech—a new birth of freedom for the United States.

THE PRICE OF WISDOM

Lincoln has suddenly become an old man in another photo by Matthew Brady done on January 8, 1864. But a wise and benevolent sage, with a wry smile, a hint of the humor and constant jokes that often colored his daily conversations. The fighting still rages and he faces a doubtful reelection. Somehow, though, he has learned to endure like his country.

On February 5,1865, Lincoln would sit only once more for Alexander Gardner in a remarkable photo in which the negative was accidentally cracked. Does Lincoln sense his coming end? Or has he withdrawn into another sphere, transformed by the trials and responsibilities born by him for four endless years?  Then again, he might be relieved by the prospect of imminent peace. 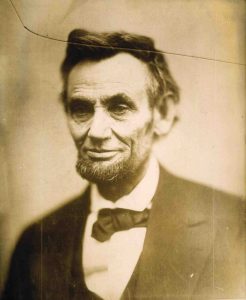 The Lincoln photographs are based on wikipedia’s list.  A variety of other historical sources were utilized for this blog.