PLEASE CLICK on the photographs to enlarge and enhance them.

IN COMMEMORATION OF THE GETTYSBURG ADDRESS

Here’s a mini-exhibition of Daniel Chester French’s beloved sculpture of the sixteenth president, offering several unique views, along with quotes by the sculptor, poet Walt Whitman, a historian, and an African-American Civil War soldier, as well as Lincoln himself including the conclusion of the Gettysburg Address which is being remembered today on its 151st anniversary.  See the end of the blog for fast facts on the work of art, plus links to the entire content of the two minute speech and other pertinent websites.

PLEASE click on the photographs for an enhanced image.  Also, more portraits of Abraham Lincoln can found on our Monday blog.

The memorial tells you just what manner of man you are come to pay homage to; his simplicity, his grandeur and his power. 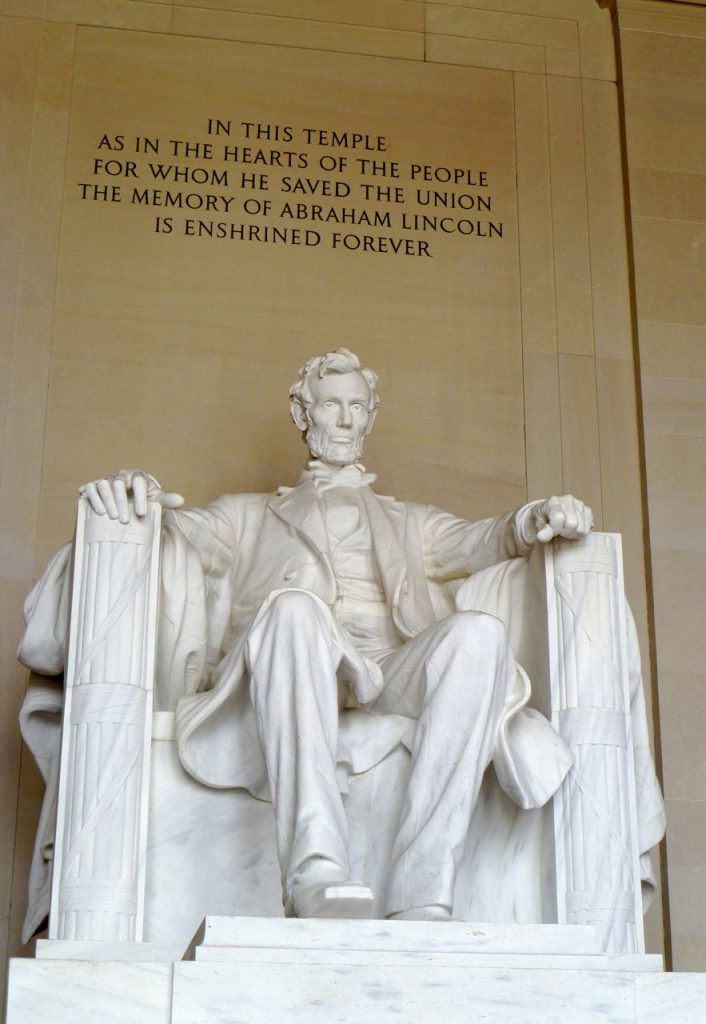 Those who deny freedom to others, deserve it not for themselves; and, under a just God, can not long retain it.

Courage, honesty, self-reliance, democracy, and nationalism were the ideals of the frontier.  Lincoln absorbed these qualities to the fill, and benefited by the opportunities that the frontier afforded. 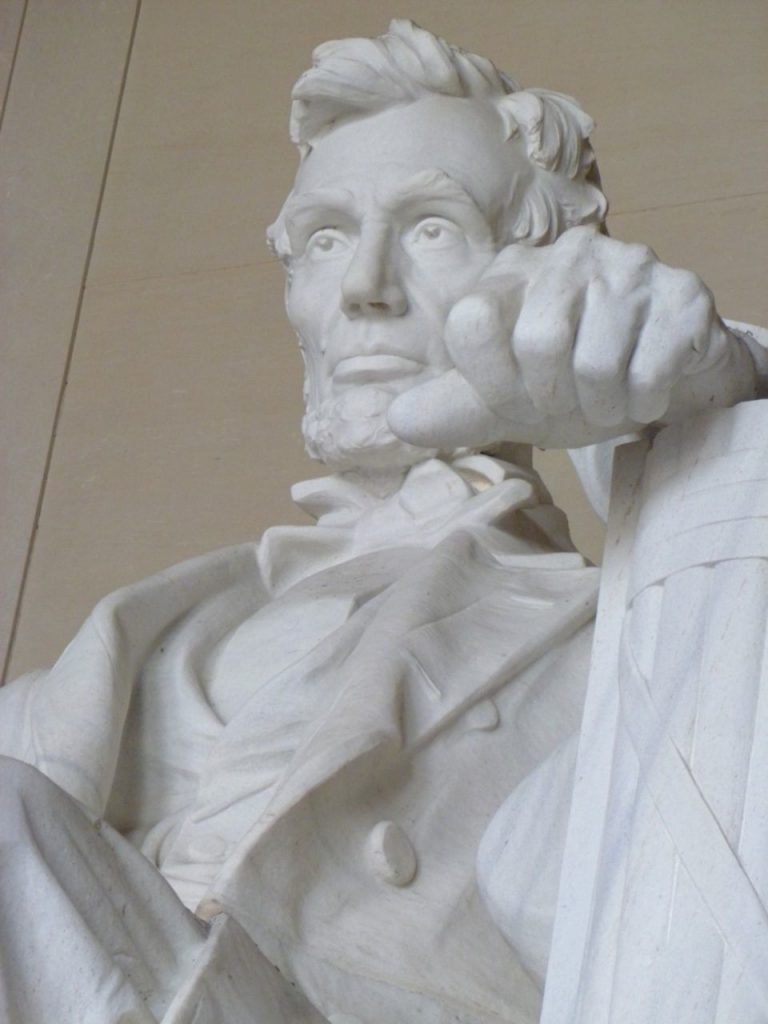 This dust was once the Man,

Gentle, plain, just and resolute, under whose cautious hand

Against the foulest crime in history known in any land or age,

Was saved the Union of these States.

French creates him as a man in a frock coat, sitting on a throne—a combination of an ordinary mortal and a god.

…….as he arose to speak, his tall form towered above the little Assembly. 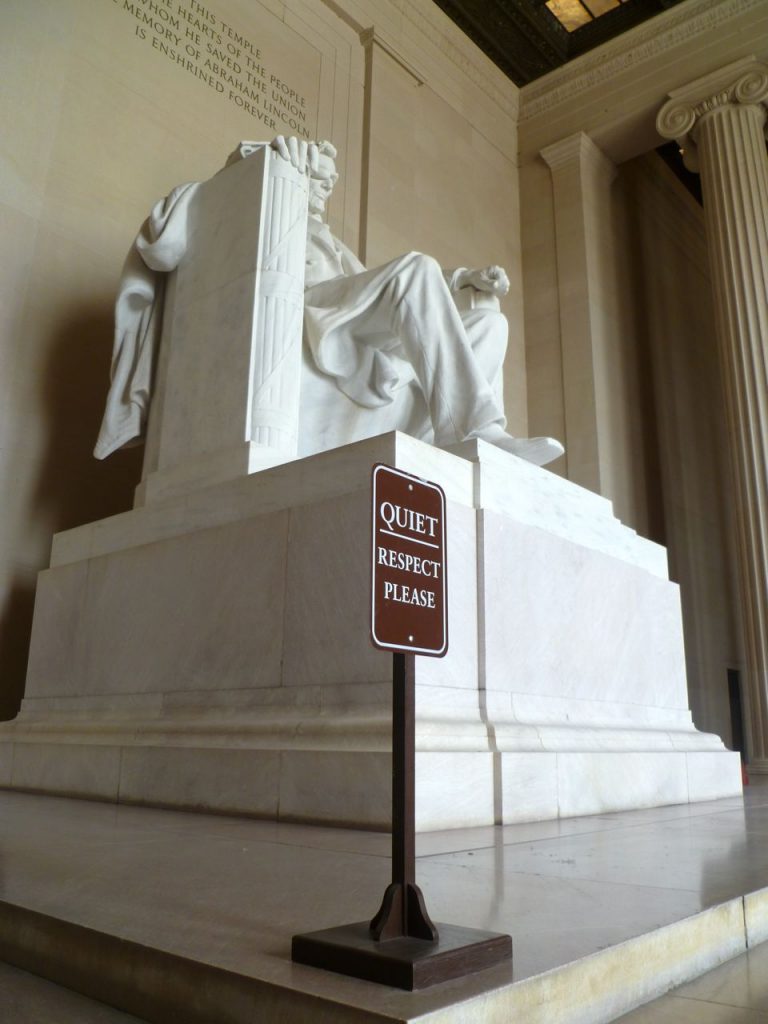 THE STRIPES AND STARS

Ho for the flag of the union. the stripes and stars of light—

A million arms. Shall guard it. and may god defend the right—

Ay brothers let us love it, and let Every heart be true. 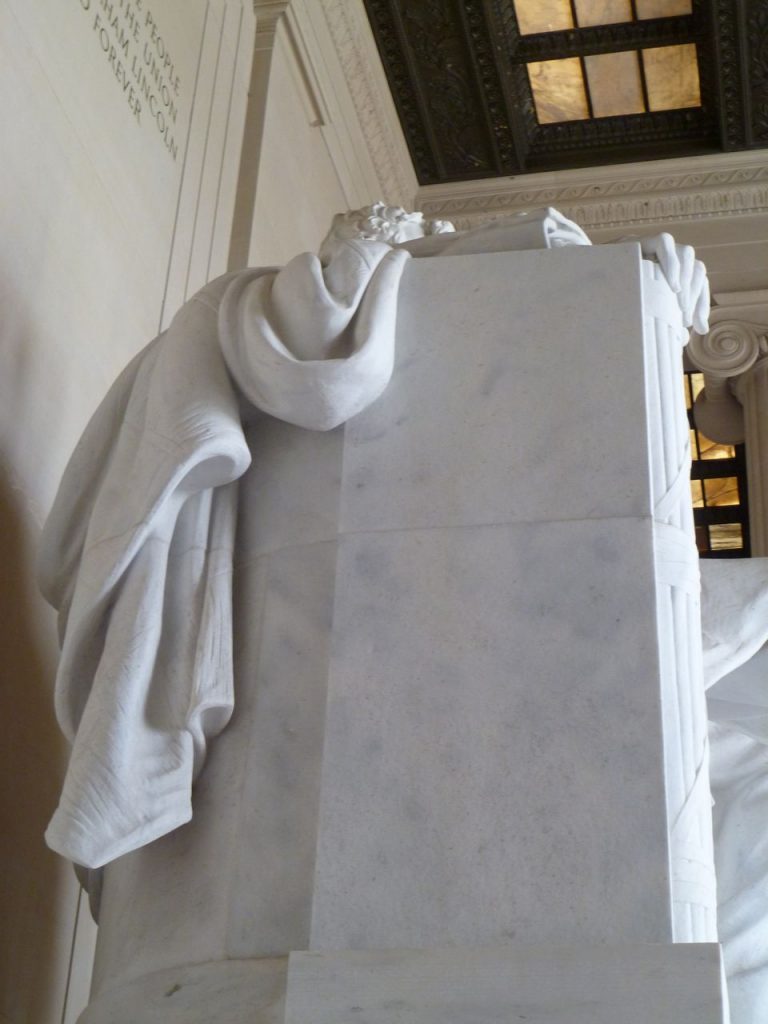 ..that we here highly resolve that these dead shall not have died in vain–that this nation, under God, shall have a new birth of freedom–and that government of the people, by the people, for the people, shall not perish from the earth.

Daniel Chester French (1850-1931), born Exeter, New Hampshire; studied both in United States and Europe; first major commission, The Minute Man in 1873; participated in many artistic projects for U.S. government and other institutions such as the Boston Public Library; actually created two Lincolns, one for Nebraska State Capitol and the second for the U.S. Mall; divided time between New York City and country home Chesterwood in Stockbridge, Massachusetts.

French received Lincoln Memorial commission in 1914; worked on at least 4 models based on photographs and cast of president’s face and hands by Leonard Volk; when Greek Parthenon temple inspired building finished, French and architect Henry Bacon together determined final 19 foot height of statue (on 10 foot pedestal); carved by the Piccirilli Brothers from 28 blocks of Georgia marble.

Dedicated May 30, 1922; incrsciption on the wall behind Lincoln as well as Lincoln’s Gettysburg Address (on left wall) and Second Inaugural Address (on right wall).

No sign of sign language.  Lincoln’s hands do not form his initials in sign language (consult Chesterwood link below for explanation). French did sculpt a statue of Thomas Gallaudet, who founded first school of the deaf so that may explain the confusion.

Strange but not true. French did not create an image on the back of Lincoln’s head which has often been identified as Robert E. Lee (see: National Park link below).

Sources for this blog include: The Outdoor Sculpture of Washington, D.C. by James M. Goode, Smithsonian Institution Press, Washington, D.C., 1974 and the website of Chesterwood.

All photos are courtesy of Joan Hart.

And discover the spirit and beauty of the arts in Through an Artist’s Eyes: Learning to Live Creatively!