Please click on the individual works of art to enlarge or enhance them.

LETTERS TO THE WORLD:

A MESSAGE FROM THE ARTIST

EXHIBITION OF THE WEEK

In the age of e-mail and twitter, letter writing is a dying art.  However, until just recently, corresponding with friends, family, and especially lovers on paper was a popular activity—a pastime captured on canvas by generations of artists throughout the centuries. The following mini-display, LETTERS TO THE WORLD, surveys the development of this theme, beginning with superstar Johannes Vermeer (1632-1675) through the 1800s.  By the early twentieth century, the subject of writing and reading letters appears to be no longer in vogue.* Was it because of the  invention of the telephone?

Vermeer’s A Lady Writing below, is one of just 34 or 35 known works by the Dutch master. Currently hanging in Washington, D.C.’s National Gallery of Art, this small painted gem, worth millions on the art market, was likely created simply to decorate the home of a propsperous citizen of Delft, some 350 years ago. His clients preferred depictions of everyday scenes, although art historians have also discovered possible mythological and religious symbolism in these paintings.

Whatever the meaning of A Lady Writing , who is the woman in the distinctive yellow jacket, spotlighted by Vermeer’s incomparable light.  Could it be his wife Catherine, or a daughter, or a professional  model? Her true identity continues to remain a mystery.

But perhaps she’ll finally decide to share her letter with posterity. Or is its contents as precious to her as the pearls lying nearby?  Preferring instead to tantalize museum goers, concealing her secret forever. 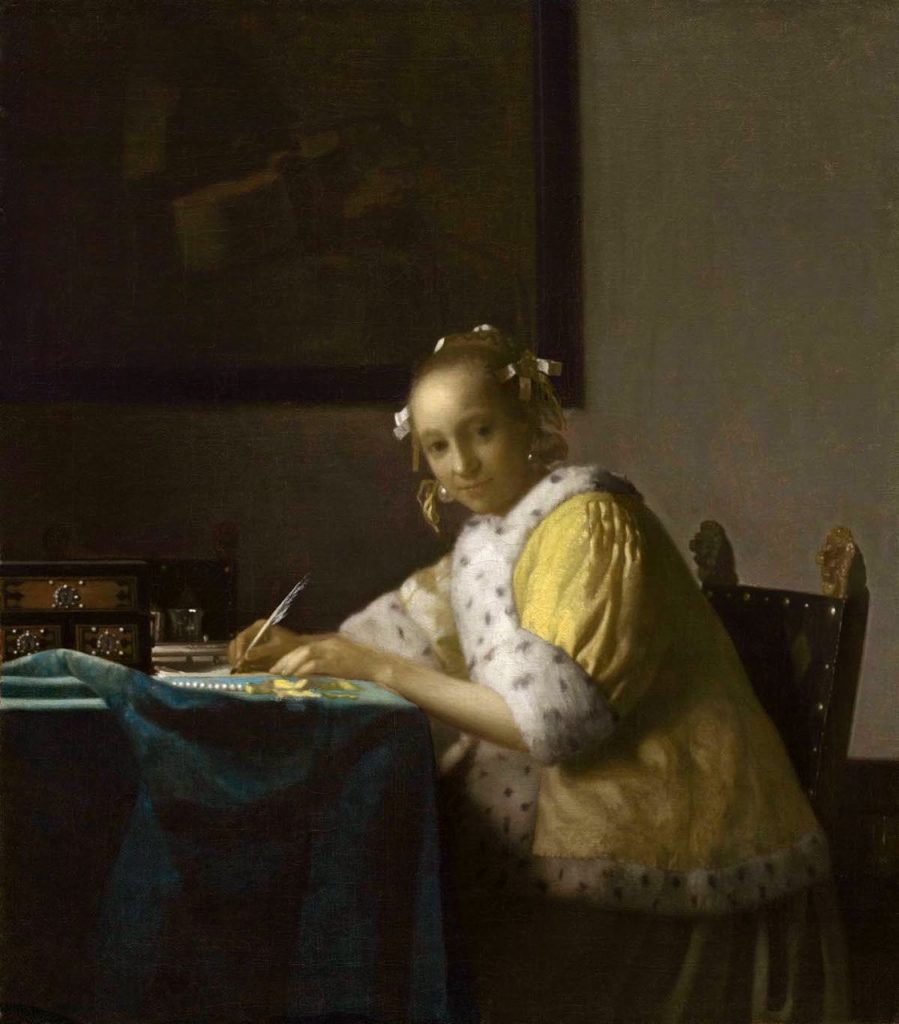 In the past, another Dutch artist Gabriel Metsu’s paintings have been confused with his contemporary Vemeer’s works because of the similarity of their style. Compared, though, to A Lady Writing, Metsu’s elegant gentleman is oblivious of both the viewer and his surroundings: the ornately framed landscape, the rich, oriental carpet, and expensive silver ink well on the desk.  For love is a serious matter in Gentleman Writing a Letter, requiring the utmost concentration. 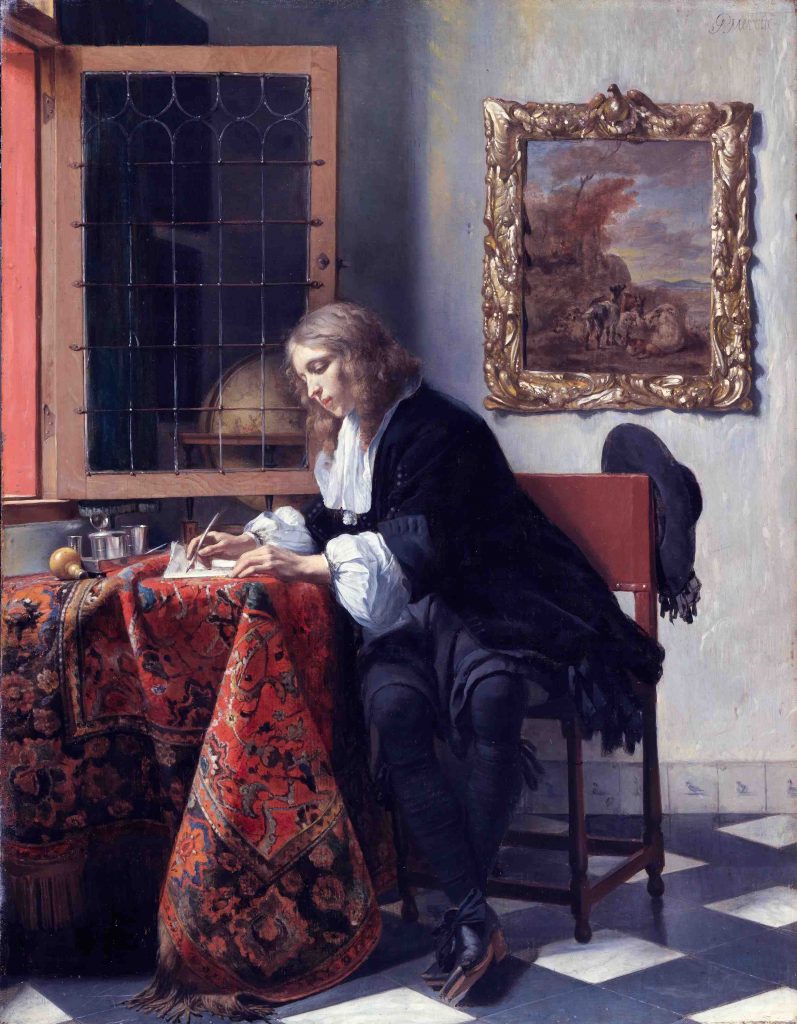 Next, at first glance, does the subject of The Reader by Jean Etienne Liotard, appear more relaxed, even casual in her attitude? Or, after a closer look (and be sure to click on the image), can you detect the flush on her cheeks, possibly in response to a declaration of love?

Liotard (1702-1789), a Swiss born specialist in pastels of the 18th century Rococo period, was trained as a miniature painter in his native country.  But he spent most of his career seeking commissions throughout Europe and Turkey; his most famous sitter was a young Austrian Archduchess Marie Antoinette.

In contrast , Girl Reading a Letter by Candlelight, with Young Man Peering Over Her Shoulder by British painter Joseph Wright is disturbing.  For instance, what is the relationship between the pair?  Notice, too, the difference in their reactions:her contentment versus his displeasure.  Is he actually jealous of the sender?  Or are we, for some reason, the object of what could also be interpreted as hostility?

Joseph Wright (1734-1797) was recognized for the candlelight effect he employed regularly in his portraits, landscapes, as well as his depictions of the emerging Industrial Revolution of 1700s’  England. 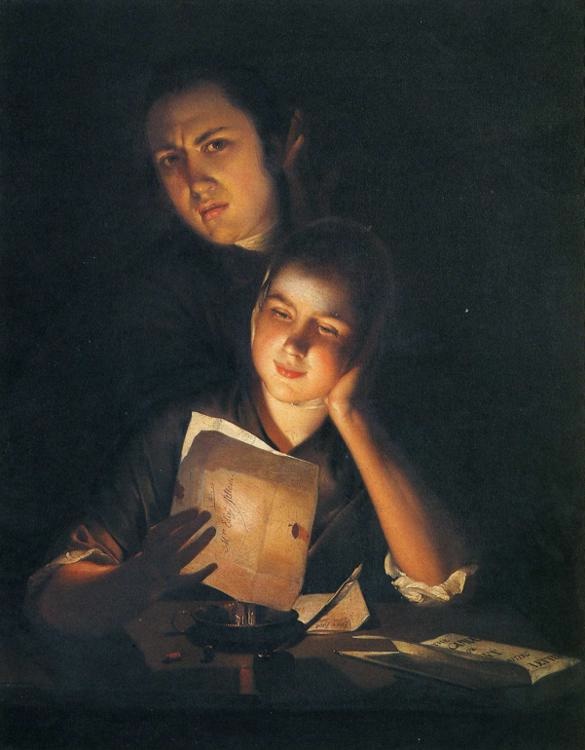 Joseph Wright, Girl Reading a Letter by Candlelight, with a Young Man Peering over her Shoulder, c. 1761, oil on canvas, Private Collection

Have you heard of Alfred Stevens (1823-1906)?  Originally from Belgium, he once was acclaimed in Belle Epoque Paris for his exquisite renderings of women.  Always fashionably dressed, his models often act like performers on a impeccably decorated set. Letters, in particular, play important roles in these painted vignettes, either the source of a melodramatic moment in News from Afar, 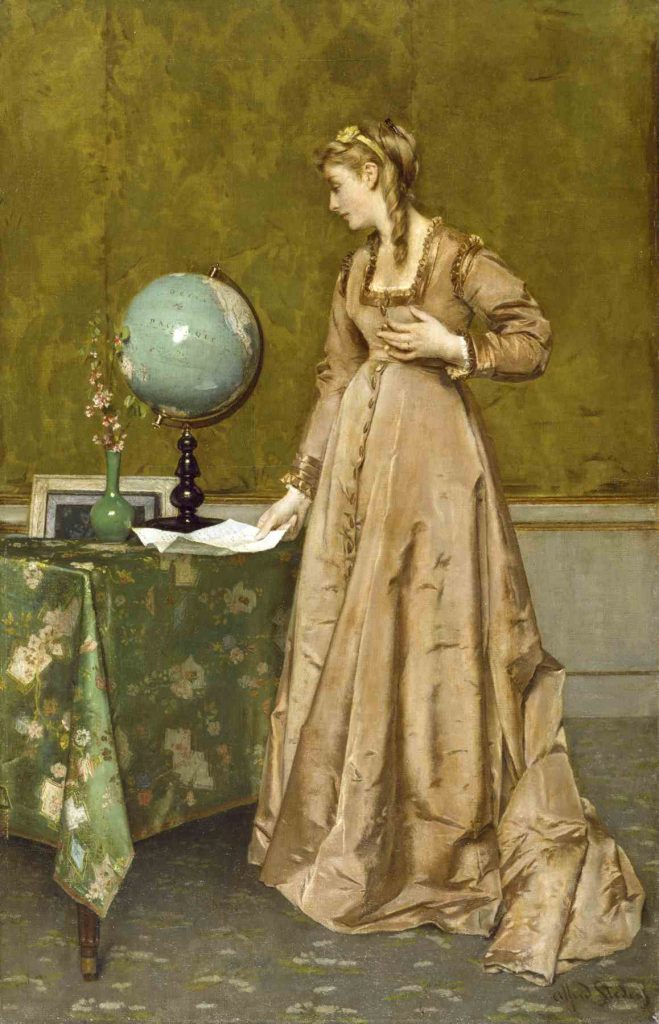 or, in Pleasant Letter. first ripped by the excited receiver from its envelope (so carelessly discarded on the floor), who then memorizes every amorous word.

Yet, Saudade is a genuine expression of loss and longing.  For the peasant girl’s lover has abandoned her, with no promise of return. Left only with this farewell letter, the cruel device of a coward.

Sao Paulo painter Jose Ferraz de Almeida Junior (1850-1899) was renowned for his realistic portrayals of Brazilian farmers and their rural life. But in the same year that he completed Saudade, Almeida Junior was murdered by a cousin for having an adulterous affair with his wife.

However, most letters are more mundane in intent, full of personal news, a few thoughts or reflections, and a comment or two about the weather.  Or, if the writer is of school age, perhaps about one’s studies like Carl Larsson’s daughter in Correspondence, done in 1912, by her artist father.  Swedish icon Larsson (1853-1919) rarely missed an opportunity to show off what seems the harmonious lifestyle of his home, now a favorite museum with the public . 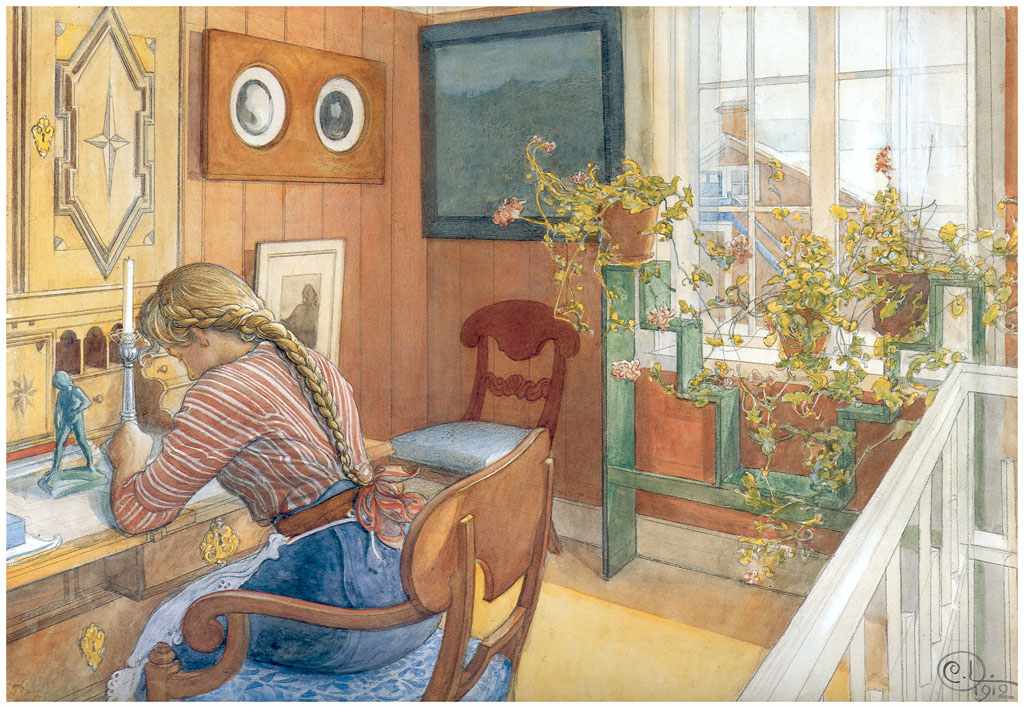 *Based on my readings and research of artistic interpretations of letters in art, from the Dutch Golden Age to nineteenth century painters.

This is a wonderful “first read” for students new to the world of the visual arts and an enjoyable reunion for those who are lovers of the arts and seek to revitalize themselves.