Tomorrow is officially the birthday of Leonardo da Vinci (1452-1519), the supreme Renaissance man: scientist, engineer, inventor, musician, author, architect, and sculptor, among other pursuits. Yet it is his paintings and drawings that endure. The Mona Lisa, for instance, is a global icon in our age of high tech images, hypnotizing us with her penetrating eyes and enigmatic smile.

But does the wife of Francesco del Giocondo, a Florentine merchant, have some rivals?  Do Leonardo’s other interpretations of womanhood match the legendary La Gioconda?  Here’s a mini-exhibition you might browse as you make your decision, providing an overview of a variety of portraits executed by the artist, from the 1470s into the first decade of the 1500s.  Although judging a Leonardo can sometimes be risky for the authenticity of at least one of these works has been contested.

The first candidate, titled a Woman’s Head, is from the hand of the youthful Leonardo. Then an aspiring 20 year old Florentine artist, attempting to establish his own reputation after working under the tutelage of his teacher Andrea del Verrocchio.

Is she a study for a Madonna? Or possibly a noble lady, representative of purity and grace? Drawn with an impeccable line that only Leonardo can sustain, moving from her wavy tresses to her fine features to her intricate headdress. 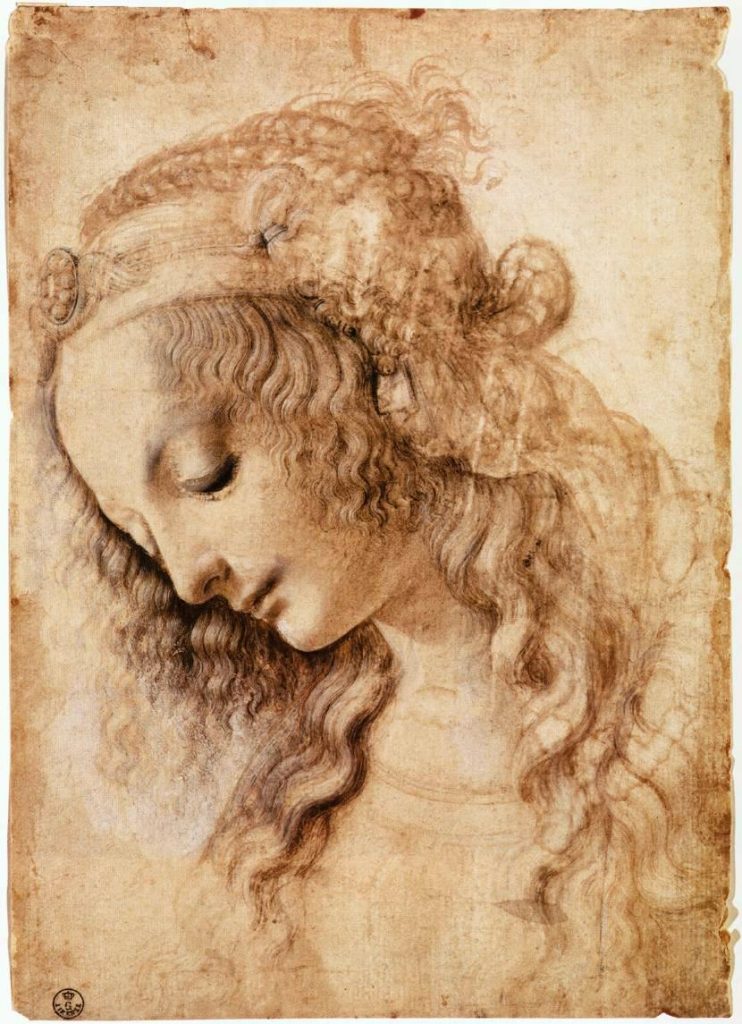 However, the identity of  Ginevra de Benci, the 16 year old daughter of a rich Florentine family, is generally known. The circumstances behind its commission around 1474, though, remain elusive after more than 5 centuries.  Was Leonardo da Vinci hired by Ginevra’s father to celebrate her marriage to Luigi Niccolini? Or did her courtly admirer, the Venetian ambassador Bernardo Bembo, pay for this likeness of his ideal (and platonic) love?

Perhaps Leonardo provides some clues in her listless gaze. As if her facial muscles have hardened into a mask of sadness or even unhappiness, relieved only by the harmonious colors and poetic landscape in the background.

Yet, In Lady with an Ermine, done by Da Vinci  about 1490, another teenager Cecilia Gallerini appears to be content as mistress of Leonardo’s long time patron, the Duke of Milan.  Proudly displaying  her exotic pet. she possesses a loveliness that transcends time and place. Her costume, too, adds to her beauty, particularly the open sleeves of rich fabric, the tied cap, and the arrangement of necklaces draped around her slender neck.

While the striking subject of La Belle Ferronniere could  be her successor, Lucrezia Crivelli who like Cecilia also wears a band across her forehead.  Except this time a jewel or ferronniere is the centerpiece, indicating that we might be actually looking at the Duke’s wife, Beatrice D’Este, instead. Or then again, did Leonardo even paint the portrait for its present owner, the Louvre, has attributed La Belle Ferronniere to one of his followers.

But how does La Belle Ferronniere compare to the Louvre’s jewel, the Mona Lisa, created in Florence, more than 10 years later?  Do you sense a connection between them in spite of the difference in style? Is it perhaps the eyes?  Are the two women at least “sisters” in spirit, linked like the other portrayals above, by Leonardo’s artistic genius?

So who wins the prize?  Is it still the Mona Lisa?  Or is it impossible to judge?

The resources for this blog include: Leonardo by Trewin Copplestone, Random House, New York, 1998; Leonardo da Vinci by Jack Wasserman, Harry N. Abrams, Inc., New York, 1984,  and National Gallery of Art by several authors, Thames and Hudson, London, 1992, plus other publications and websites.

Want to learn more about the Mona Lisa, click:

A Closer Look at the Mona Lisa

Explore the world of art from Rembrandt to O’Keeffe, Vermeer to Warhol with Through an Artist’s Eyes: Learning to Live Creatively!