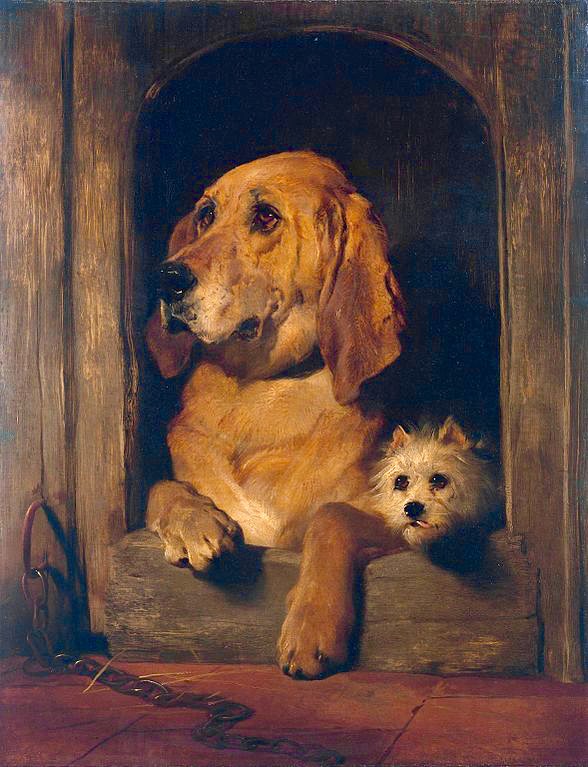 Sir Edwin Landseer (1802-1873), the painter of Dignity and Impudence, was once a household name in England. His vivid portraits of animals were popular with the British, from middle class commoners to the members of the aristocracy. Queen Victoria was a particularly enthusiastic fan of Landseer, commissioning him to depict a royal menagerie of pets, from her husband Prince Albert’s elegant greyhound to her delicate love birds.

However, a pharmacist’s dogs, Grafton and Scratch above, are the rivals of any royal canine. The artist, by juxtaposing the two companions, highlights the distinct personalities of their very different breeds: Grafton symbolizes  the stately bloodhound, rescuer of the lost and missing, while tiny Scratch is the fearless West Highland terrier, ready to confront any opponent, no matter the size. (Yet, it was Grafton who was actually the fighter, barely surviving a fierce encounter with another dog.)

Their owner Jacob Bell was a chemist and founder of the Pharmaceutical Society of Great Britain. He also managed Landseer’s business affairs and provided support for other figures in the art world.

Source for information on Sir Edwin Landseer’s Dignity and Impudence is from the website of the Tate.

TO VIEW HIGHLIGHTED ARTICLES BELOW, INSERT DATE IN ARTFUL ARCHIVES TO BE ABLE TO VIEW THE PAINTINGS.

animals in art, creativity, Dogs in art, realism and animals