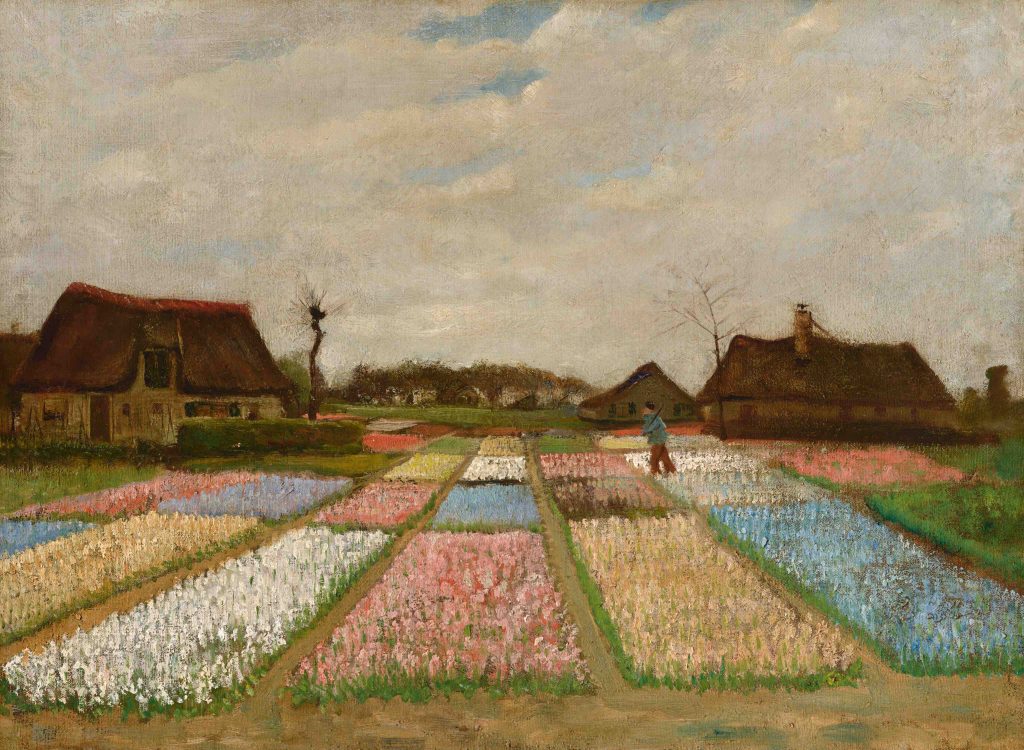 When: Although the exact date of this painting is not known, it was probably created in the spring of 1883, and is considered one of Van Gogh’s earliest oil paintings.

Where: In Van Gogh’s home country of the Netherlands, where he spent the first years of his artistic career, from the early 1880s to his departure for Antwerp, Belgium (and soon after Paris) in late 1885. Among the places he resided was the Dutch capital of The Hague, where he worked as an artist for almost two years, from 1882-1883.

What: The blooming fields of the Dutch countryside, likely near the Hague. The flowers might be hyacinth.

How: Van Gogh’s years in his native land were formative ones. Although he was mainly self-taught, he also took formal art lessons.  One of his art teachers was Anton Mauve (1838-1888), a relative and a leading figure of an artistic movement called the Hague School.

Van Gogh’s works of the Dutch period are usually characterized by dark, earth tones evident in the far background of cottages and trees. Even the sky is overcast, with only a few openings of faint blue. However, in contrast, the multi-colored floral beds represent the awakening of the new season, their beauty extending deep into the space of the painting.

Why: Van Gogh ‘s work of art not only expresses his love of nature, but also his admiration for the peasants. For during his artistic journey in the Netherlands, he produced countless depictions of the men and women who farmed the Dutch land, culminating in the iconic The Potato Eaters, done about two years later in 1885.