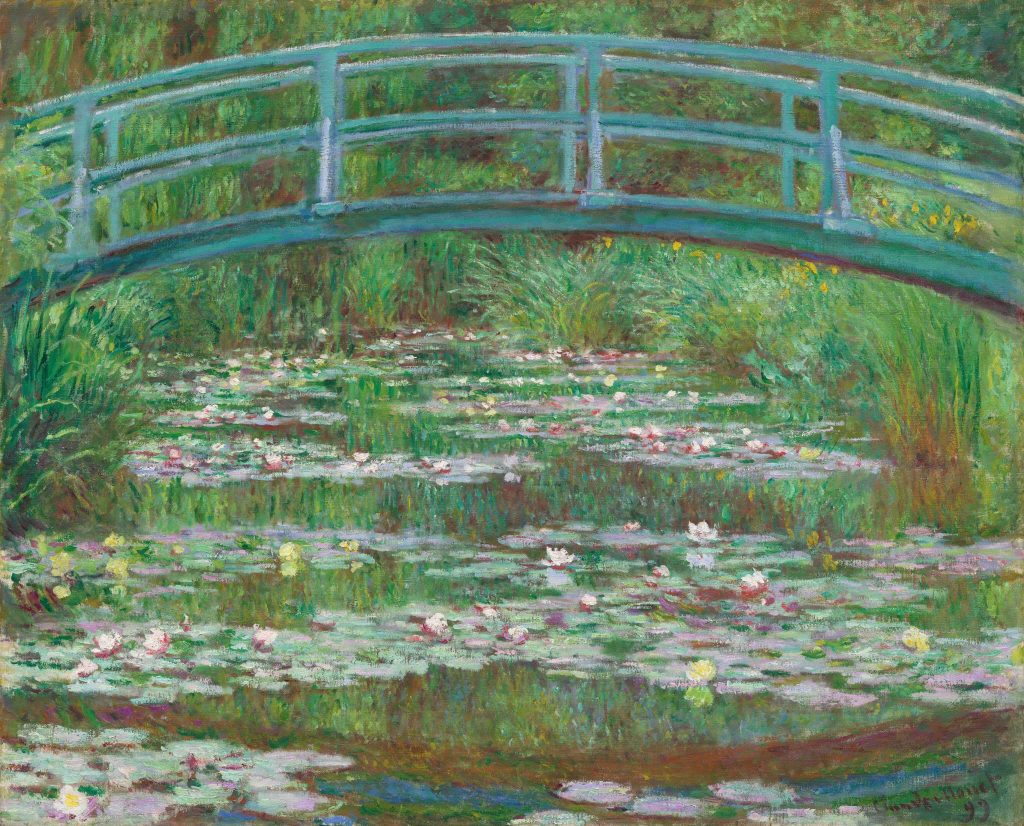 When: Near the beginning of the 20th century, the almost 60 year old Monet produced one of the first paintings of his now famous water lilies pond.

Where: At Monet’s home in Giverny, where he and his family settled in 1883. Initially a renter, Monet purchased both the house and property in 1890. By 1893, he added another parcel of land where he would build the water lilies pond, a work of art in itself.

What: In 1895, Monet constructed a Japanese-style footbridge, inspired by his love of the Asian nation’s culture. Some four years later, mainly in 1899, Monet would paint at least 12 views, including the one pictured above.

How: Color, light, and brushstrokes are at the heart of Monet’s artistic universe, in this case drawing us into a complex vision: from the vibrant blue tones of the bridge itself, to the intricate patterns of the water lily blossoms, defined by delicate touches of predominantly white, yellow, and red pigment, to the verdant greens of the vegetation. Notice too, the depth of the reflections, mirroring the lushness of the trees overhanging the pond.

Why: After years of  travel, painting landscapes across his native France as well as other countries, Monet has created the ideal place of meditation, the prominent subject of the last decades of his long life. Inviting us into its dream-like boundaries where, like the artist, we can spend hours in quiet and peace, undisturbed by the pressures of the outside world.

However, The Japanese Footbridge represents just the beginning of a dynamic new period in Monet’s career. For until his death in 1926 at the age of 86, Monet would leave to posterity some 250 canvases of his beloved water lilies, culminating in the extensive cycle of  murals at the Musee de L’Orangerie in Paris. Overcoming the tragic loss of family, the destruction of World War I, and declining health, particularly cataracts.

This image is in the public domain, courtesy of the National Gallery of Art, Washington, D.C.