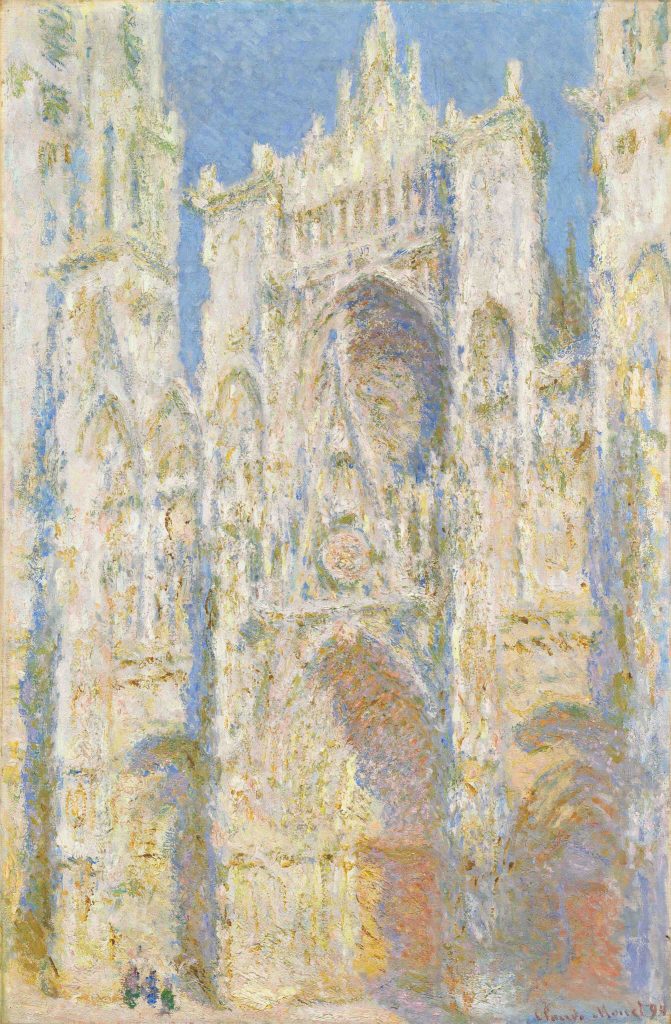 When: Although the date is 1894, it is one of the series of cathedral canvases that Monet painted on site from winter into spring of 1892 and of 1893.

Where: In Rouen, the capital of Normandy and approximately 40 miles from the artist’s home in Giverny, where he and his family had permanently settled in 1883.

What: Rouen Cathedral, one of the most famous cathedrals in France, renowned for its medieval Gothic style, spanning the 12th to 15th centuries.  Previously, Monet series were of nature, including haystacks and poplars found in the countryside near Giverny.

How: Monet painted the cathedral some 30 times, mainly of the view above, from rooms he rented located across the street (including in a woman’s clothing store). His goal was to capture the changing color and light on the facade from morning to afternoon to evening, alternating canvases as the day progressed. However, he generally finished the works back in his Giverny studio.

Why: Like other great artists, Monet was always challenging himself. In this case, depicting the intricate architecture of what was considered a national symbol, with its complex of towers, portals, and sculptures among other details.  Not just once, but numerous times recreating its daily transformation through the winter and into the spring: from the misty atmosphere at dawn to the multi-colors of noon, dominated by the luminous white of  full sunlight, to the brilliant, reddish tones of sunset.

The presence of humanity, though, is almost non-existent in the series of paintings.  Except for the version above where a tiny trio of figures is dwarfed by the monumental scale of the centuries old building.

This image is in the public domain. Courtesy of the National Gallery of Art, Washington, D.C.