Through an Impressionist’s Eyes: The Flags of Fifth Avenue

……and I looked up the Avenue and saw these wonderful flags waving and I painted the series of flag pictures after that.

In commemoration of the 100th anniversary of World War I (1914-1918), the Boston Museum of Fine Arts, the Scottish National Portrait Gallery, and other art museums are now hosting exhibitions of works associated with this conflict. And probably during  the next few years, a major art institution or gallery will showcase the Flag Series of American Impressionist Childe Hassam (1859-1935). For between 1916 and 1918, the artist created some 30 paintings of the banners of the United States and its allies that once flew along Fifth Avenue and other New York streets during the war period.

So here’s a sneak preview, beginning with Just Off the Avenue, Fifty Third Street, May 1916, which was actually executed about a year before the American entry into what would become known as the Great War.  Hassam had just participated in the Preparedness Day Parade, a public event in which enthusiastic New Yorkers marched up Fifth Avenue in support of the war being waged in Europe.  However, he chose to depict the quiet enclave below, decorated with just a pair of red, white, and blue flags. But can’t the figures, barely distinguishable in the luminous light, hear the shouts and music of the parade only blocks away? 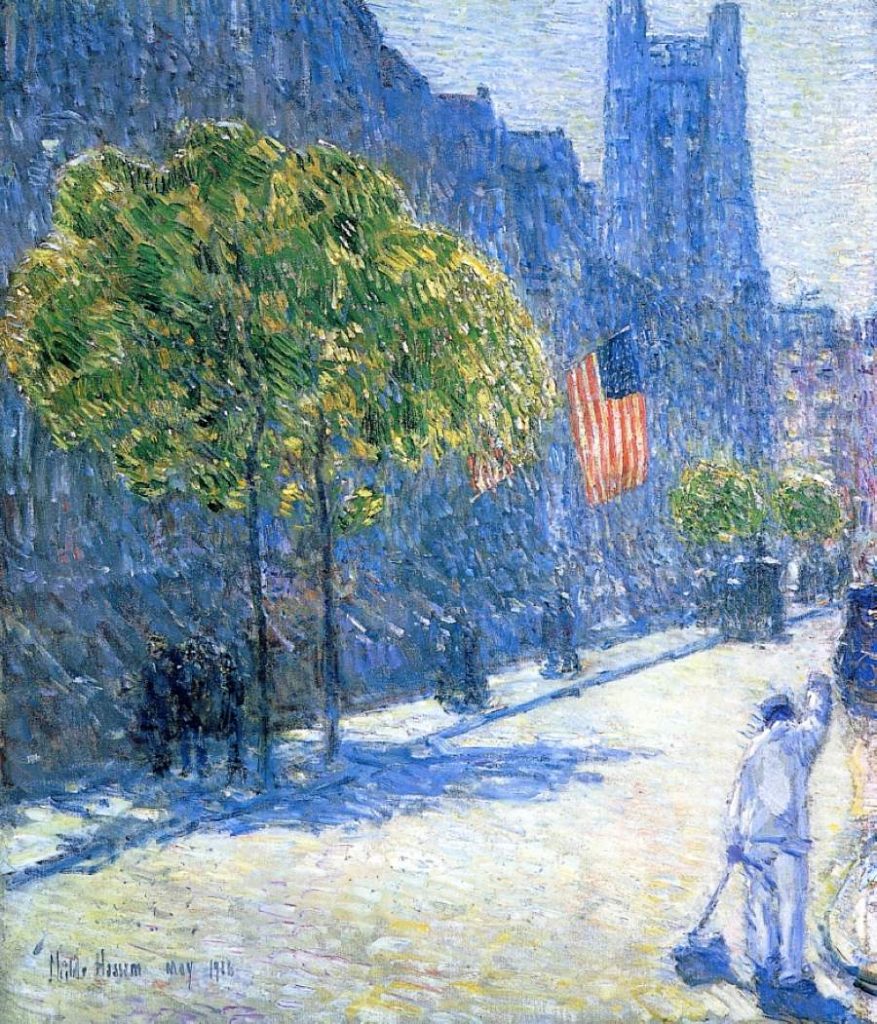 While in Fourth of July, done two months later, Hassam decided to immortalize the spectacular tricolor display of stars and stripes on New York’s grandest thoroughfare. 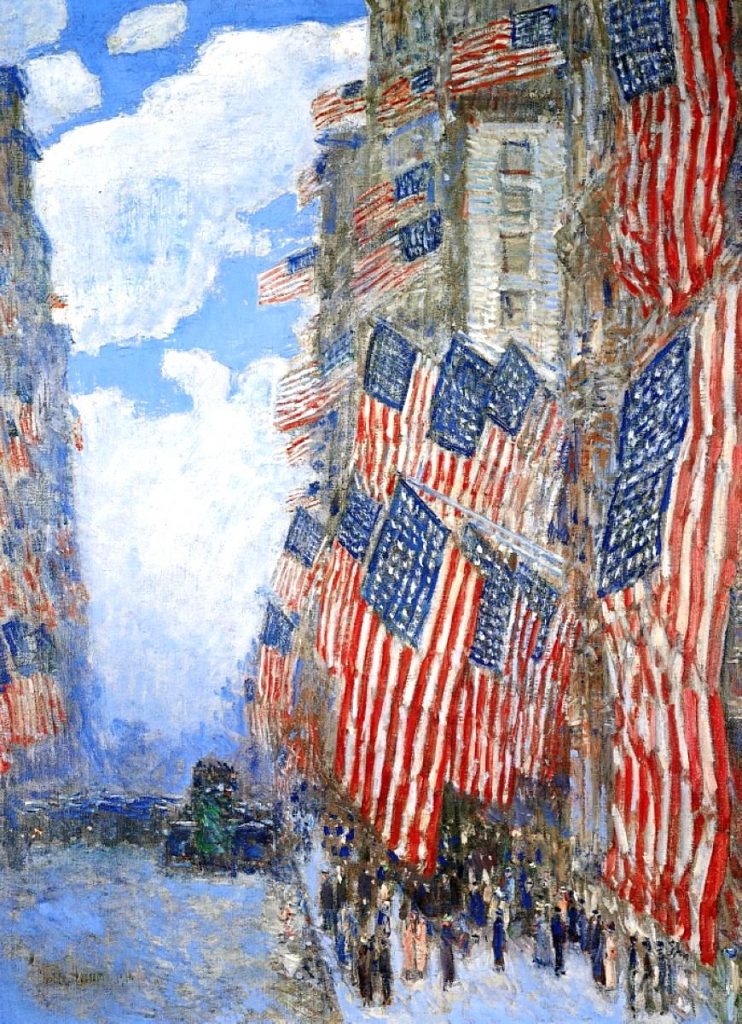 In 1917, Hassam continued his artistic tribute to the war effort with Avenue of the Allies or Fifth Avenue where the national symbols of Italy, England, and France (in the background) now also hung after the United States joined World War I. Do they seem to overpower the massive architecture and clamoring crowds of the world’s then most modern city?

In Avenue of the Allies, Great Britain, Hassam portrays one of the peaks of New York patriotism celebrated from September 28 to October 19, 1918.  When artists and architects designed an unforgettable arrangement of flags that extended along Fifth Avenue, from 26th to 58th streets for the 4th Liberty Loan Drive. However, within weeks, the war would be over, with the United States and its Western allies the victors.

Hassam would exhibit his group of flag paintings in New York, Pittsburgh, and Washington, D.C. in the coming months, hoping that one buyer would purchase them.  But he was finally forced to sell them individually, so that today they are scattered throughout museums and private collections. In 1988, the National Gallery of Art in the nation’s capital, did bring some of them temporarily back together in an exhibition on the flag theme.

This blog is based on Childe Hassam: American Impressionist by Ulrich W. Hiesinger, Prestel, New York, 1994.

And learn about other American artists such as Georgia O’Keeffe and Andy Warhol in Through an Artist’s Eyes: Learning to Live Creatively!