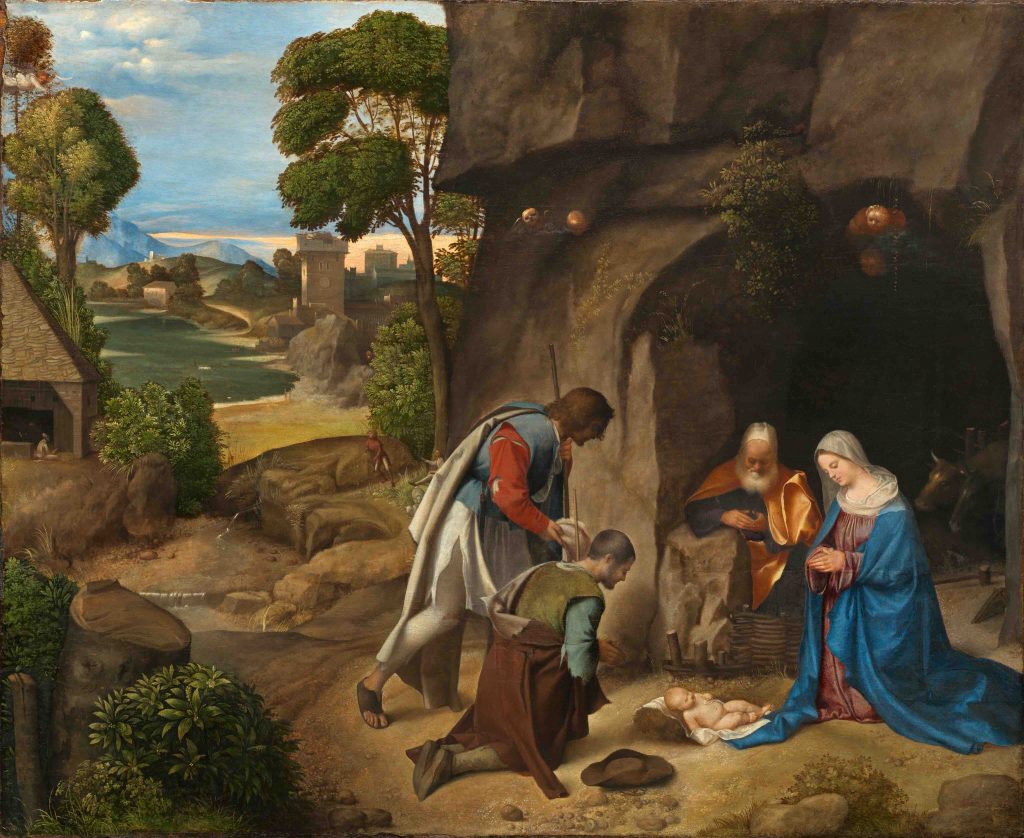 Title: The Adoration of the Shepherds

When: Created during the peak of the Italian Renaissance, a period of the arts marked by the revival of Greek and Roman civilization, as well as a growing interest in the realistic depiction of humanity and nature evident in religious art works such as altarpieces and frescoes.

How: Giorgione uses oil or pigment to model both the figures and the surrounding environment. Especially striking are the rich colors of the clothing of Joseph and Mary as well as the shepherds. Note in particular the movement of Joseph’s yellow drapery positioned on his shoulder. While the play of light and shadow defines the subjects, animating the scene before us. Yet, the artist also contrasts the area of sunlight with the darkness of the cave occupied by the donkey and ox.

Venetian artists like Giorgione are often considered the first major landscapists in the history of Western art. For Giorgione sets this miraculous event outdoors, within the poetic beauty of the countryside, allowing our eye to travel deep into the space of the painting, ending with the distant vista of the mountains and the dramatic expanse of the sky.

Notice too the quiet grace and devotion of the Holy couple and shepherds, kneeling in prayer before the tiny infant Jesus who lies on the ground. Joseph was often portrayed as an older, grandfatherly man contrasting to the youthful Mary. And can you pick out the angels present throughout the painting?

An Enduring Legacy: The Adoration of the Shepherds has often been a beloved subject of Christmas cards.

Next: Monet & the Waterlilies

This image is in the public domain, courtesy of the National Gallery of Art, Washington, D.C.