The anniversary of Leonardo da Vinci’s birthday’s was Thursday, April 15, 1452.  A true Renaissance man, one of the great geniuses of history: a painter, sculptor, architect, engineer and scientist.

And creator of  the most famous painting in the world: the Mona Lisa.  However, art historians often debate the content and meaning of this work of art.  For instance, who is the subject?  Most likely Lisa Gherardini del Giocondo, 24 years old, and the wife of a Florentine silk merchant. Yet, not everyone agrees. The dates also are uncertain, ranging from 1503 to 1517. One of the most tantalizing theories is that Leonardo actually created 2 versions of  the Mona Lisa.

But what is it about Leonardo’s masterpiece that draws us? Is it Mona Lisa’s hypnotic eyes?  Or her haunting, enigmatic smile? Or gracefulness of her pose? Her overall mystery and the endless questions she inspires?

The image of Mona Lisa has been so powerful that her artistic legacy has endured over the centuries. Sometimes directly influencing  major artists such as Raphael and Corot; in other cases, compared to other icons of  portraiture by Vermeer and Klimt. 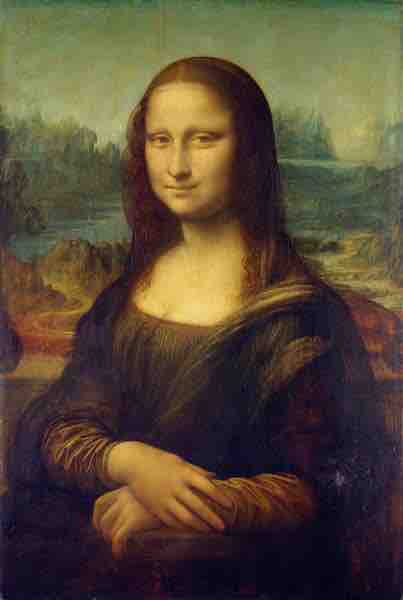 IMITATION IS THE SINCEREST FORM OF FLATTERY

By 1506, when the 23 year old Raphael Sanzio (1483-1520) created Lady with a Unicorn, he obviously was familiar with the Mona Lisa. For like Leonardo, Raphael was also residing in Florence in the early 1500s.  Soon Raphael would become an artistic giant of the High Renaissance, along with Leonardo and Michelangelo (1475-1564). 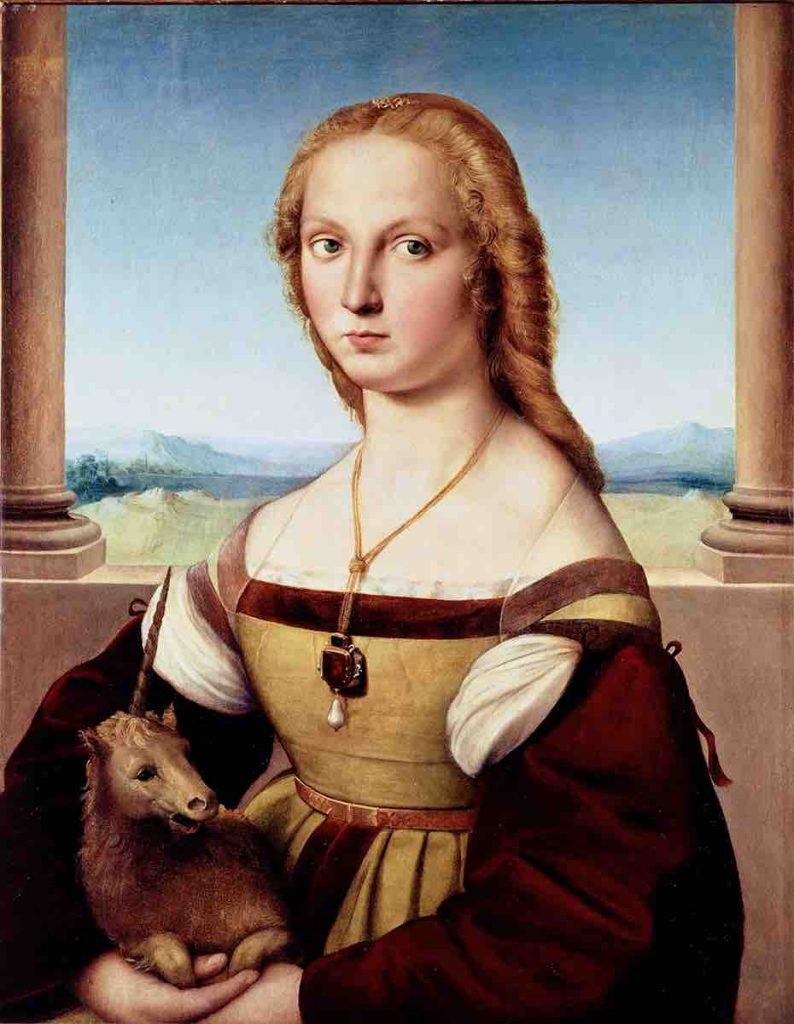 MONA LISA AND THE BAKER’S DAUGHTER

Raphael like the rest of us continued to be entranced by the Mona Lisa.  Can you see the similarity, mainly in the form and and placement in the composition, of Raphael’s popular portrait of Margarita Luti, his mistress and model?  She is also known as La Fornarina or the “baker’s daughter,” posing for a number of Raphael’s madonnas. 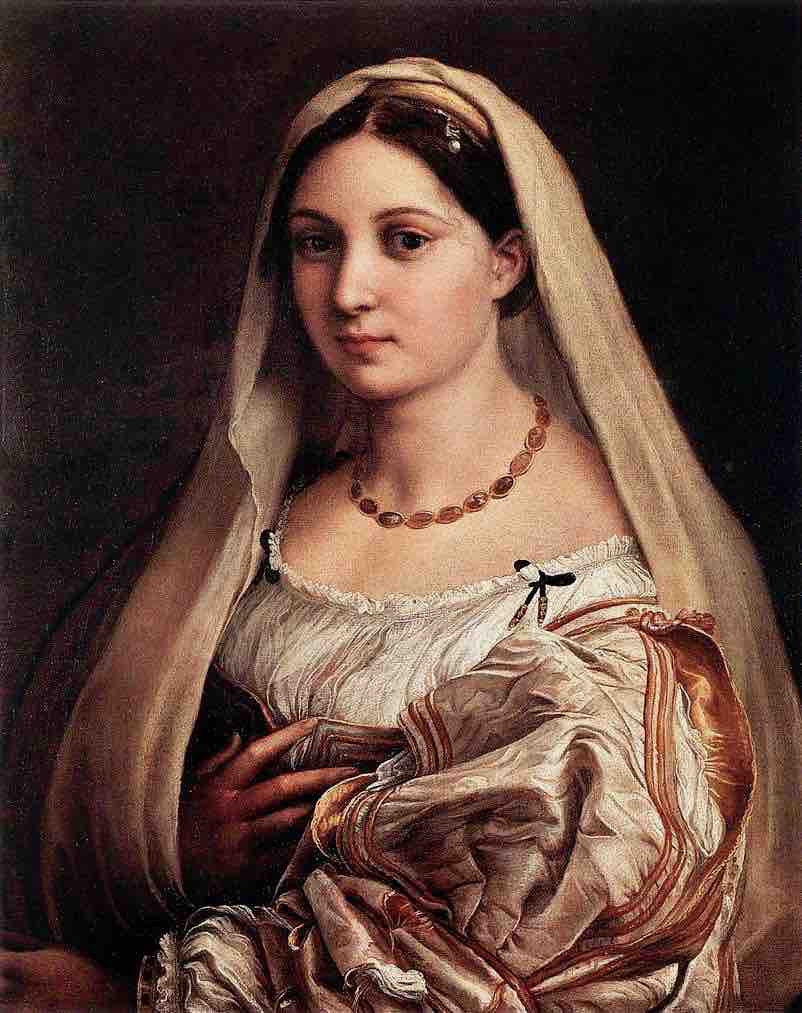 Did Anne Boleyn actually meet Leonardo? Did their paths cross when she was a mere teenager serving in the French court of King Francois? The aged artist had been invited by the French ruler to spend his final years near the royal palace, the Chateau d’Amboise. Possibly Anne could have at least seen the Italian master now living far from his native Italy.

Ironically, the image of the woman who inspired Henry VIII to divorce his first wife Katherine of Aragon and change the course of English history, has remained illusive. The drawing below by German portraitist Hans Holbein (1497/98-1543) is generally considered an authentic representation, although the inscription in the upper corner was probably added later. 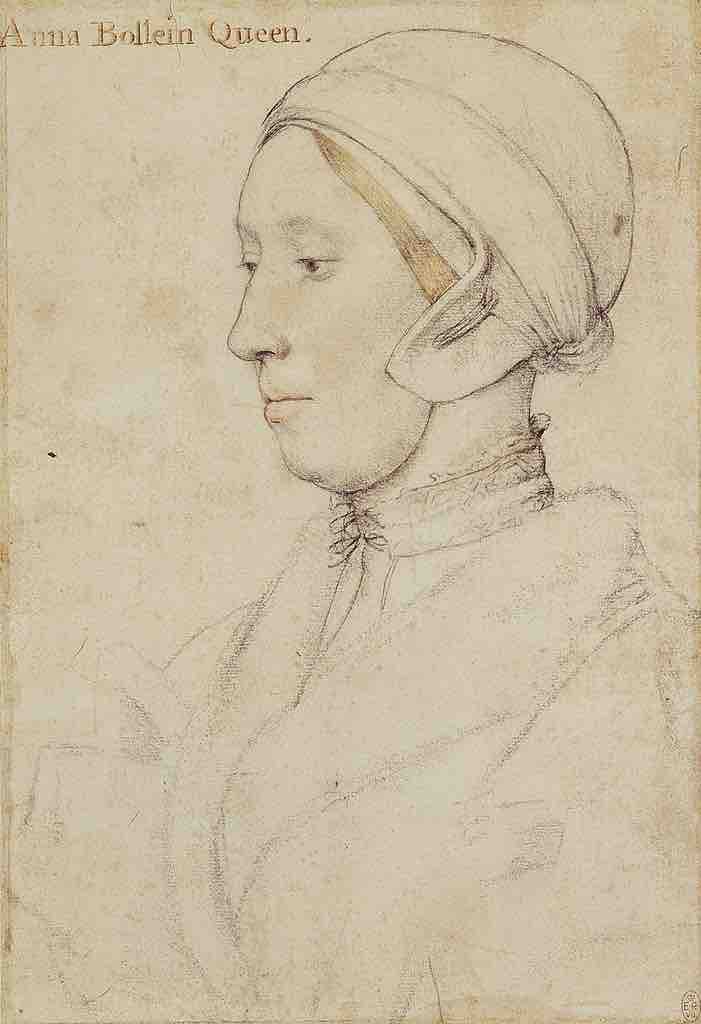 MONA LISA OF THE NORTH

Does the Mona Lisa have a new rival? By the end of the 20th century, Girl with a Pearl Earring had been achieving international popularity, especially after the publication of a bestselling book of the same name, followed by a $31.4 million grossing film. Referred today as the Mona Lisa of the North, she disappeared for some two centuries after Vermeer’s death resurfacing in 1881, when she was purchased for the equivalent of about $33.00.

However, the identity of this Dutch girl, with the mesmerizing eyes and alluring smile is unknown. For it is likely Vermeer’s Girl with a Pearl Earring is a tronie, more a character or type of person than a specific individual. 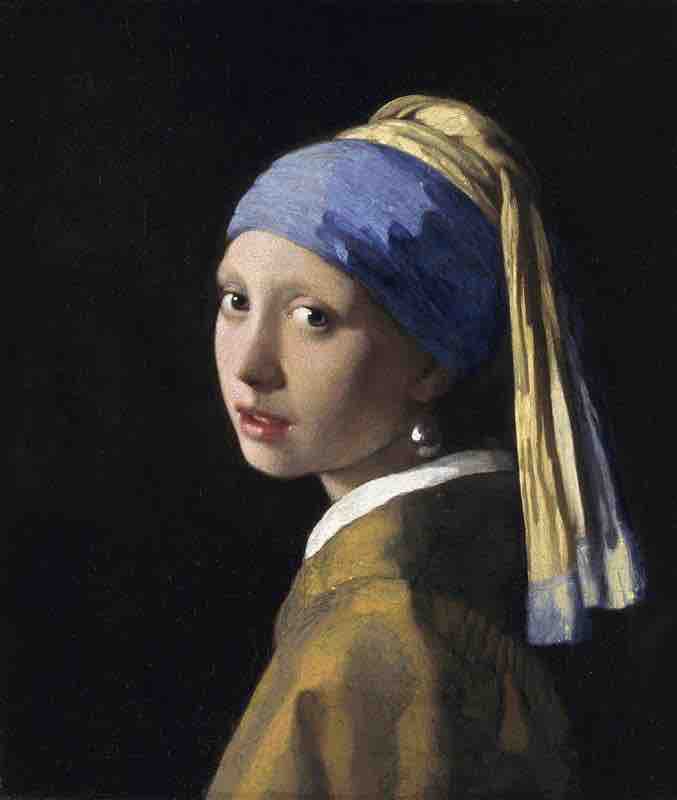 The Lady with a Veil may not be officially designated Sweden’s Mona Lisa, but she does seem to have a secret.  Or at the least, she is an expert at playing coy. Teasing us in a never ending game of peek-a-boo, though not completely concealing her right eye.  While just beneath, her fan caresses her cheek, a sign perhaps of both flirtation and even seduction.

Unlike Girl with a Pearl Earring, she does have a name: the French pastel painter Marie Suzanne Giroust (1734-1772) and the wife of Swedish artist Alexander Roslin (1718-1793), a renowned European court painter who created this enchanting portrait. 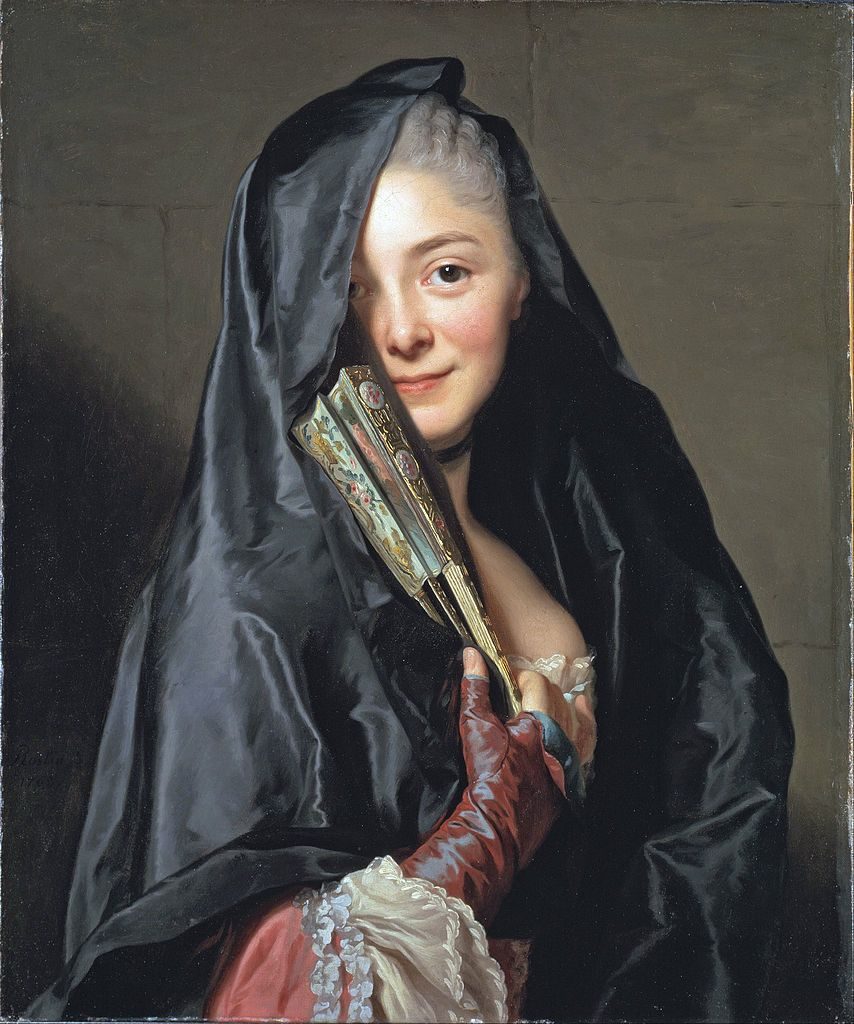 Alexander Roslin, The Lady with the Veil (the Artist’s Wife), 1768, oil on canvas, Nationalmuseum, Stockholm, Sweden

TRIBUTE TO THE MONA LISA

Although French master Jean-Baptiste-Camille Corot (1796-1875) is often acknowledged as an artistic innovator of his time, he also had a love and respect for the Renaissance past. His home was Paris where he had access to Leonardo’s incomparable work. The result was Woman with a Pearl (actually a garland) who assumes the position of her predecessor.  Do you see how she is placed in the foreground, the body turned at the same angle as the Mona Lisa with a similar arrangement of hands and arms.

Yet, did Corot decide to refrain from capturing the essence of the original Mona Lisa’s expression?  For where is the provocative smile and unforgettable eyes? 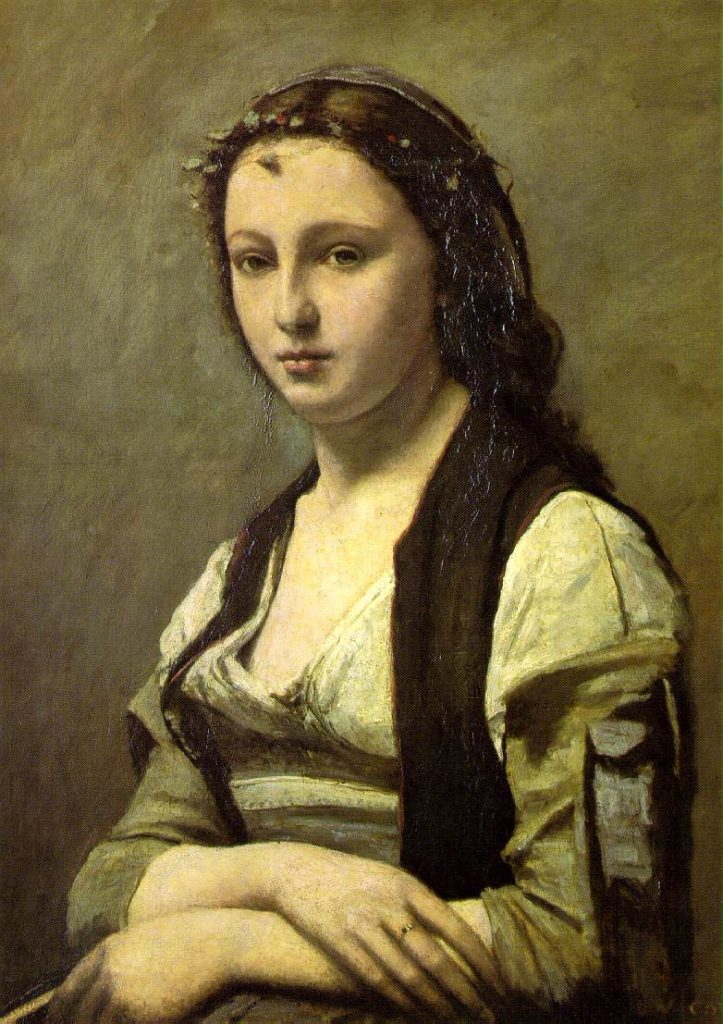 MONA LISA IN THE AGE OF ANXIETY

Munch’s The Scream is an icon of modern art, a Mona Lisa of our time.

Do you agree? Does that strange, gnome-like figure with the skeletal face twisted in horror symbolize the Mona Lisa of our age?  Although created by Norwegian artist Edvard Munch (1863-1944) more than a century ago?

Or perhaps you are still searching for the answer. 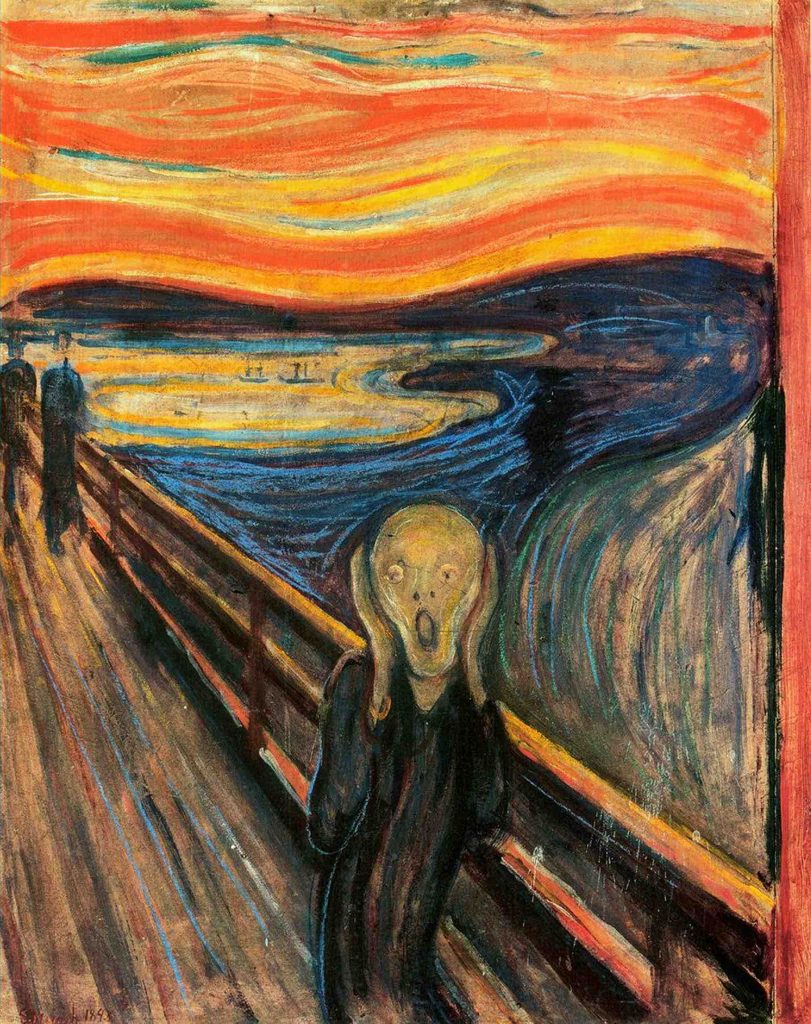 Like the Mona Lisa, this painting seemed to embody femininity.

For some 50 years, Adele Bloch–Bauer by Gustav Klimt (1862-1918) graced the walls of the Belvedere Museum in Vienna,  However, in 2006, she became a super-star when the Austrian government, after an extensive legal battle, was ordered to return her portrait to  Maria Altmann, her 90 year old niece. Soon, Klimt’s iconic work was purchased for a then a record-breaking $135 million by Ronald Lauer and today hangs in Neue Gallerie in New York City.

Half woman, half, peacock, Adele, in her early twenties, is encased in a shimmering display of gold and a mosaic of  symbolic patterns.  A member of one of Vienna’s wealthiest families, she became a leading patron of the arts. Like the Mona Lisa, Adele fascinates us with her beauty and femininity, immortalized by the artist who might have also been a lover. 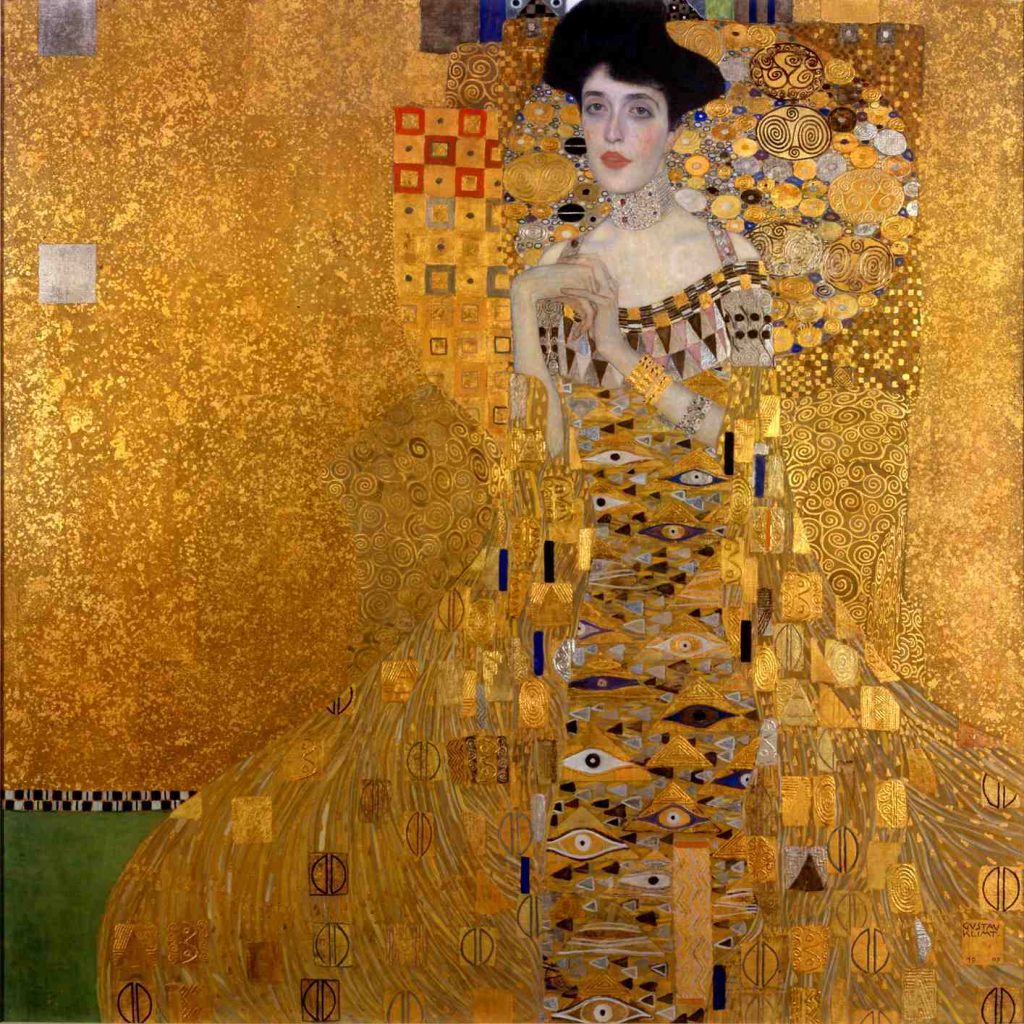