PLEASE CLICK on the works of art to ENLARGE them.

EXHIBITION OF THE WEEK

FATHER’S DAY THROUGH AN ARTIST’S EYES

Father’s Day, an international holiday, was celebrated yesterday from the Bahamas to Kuwait to the United States (although the date varies in other countries).  So in honor of this annual event, why not take a tour of a mini-exhibition you’ll not likely see in any museum, highlighting a number of some famous artist patriarchs.

We might be a bit scandalized today that Baroque master Peter Paul Rubens’  second wife Helena Fourment was his niece although not by blood; she was actually the daughter of the brother-in-law of the painter’s first spouse Isabella Brant.  Sound complicated?

Helena was also only 16 when she married 53 year old widower Rubens (1577-1640) who by then had been court painter to several monarchs. In addition to his royal duties, he did manage to paint endearing portraits of  each of his trio of children by Isabella (click on the link below to view daughter Clara Serena).

However, Rubens would usually place his second group of offspring (5 in total) with Helena, eager to show off her voluptuous beauty. In the richly executed Rubens, His Wife Helena and Their Son Frans, for example, both males are obviously enchanted by her presence. (See: the Rubens House museum website for some slides of the upcoming 2015 exhibition of the painter’s family.)

For the Love of Clara 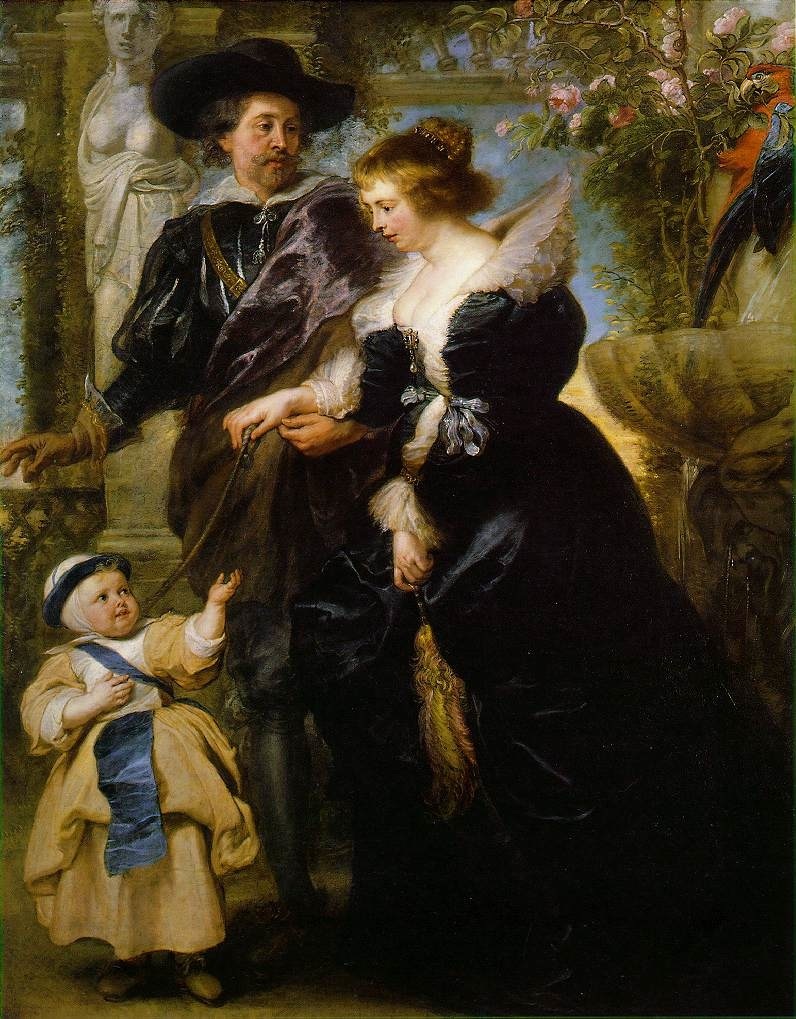 Margaret and Mary Gainsborough may be only about 8 and 9 in the unfinished The Painter’s Daughters with a Cat, yet don’t they seem older, if not in  size, than spirit?  The younger Margaret in particular displays a sadness and sensitivity, unusual in someone that age, while her elder sister Mary holds her in a supportive embrace. Their father 18th century British portraitist Thomas Gainsborough (1727-1788) had originally intended a feline companion to share the canvas with them; instead its ghostly image creates an almost disturbing effect.

Gainsborough was close to Margaret and Mary, his sole children, making certain that they had an excellent education by sending them off to private school; he also taught them drawing and painting.  But Mary, who was the comforter in the painting, would suffer from mental illness as an adult, depending on Margaret as her caretaker.

Gustave Courbet (1819-1877),  was a legendary pioneer of French 19th century art, laying the groundwork for the Impressionists. He devoted himself to his artistic career, always remaining single, declaring once that I am inclined to get married as I am inclined to hang myself.*  For a while he did have a mistress who bore him a son, but apparently left no visual record of the child.

Courbet, though, was loyal to  to his parents, returning often to his birthplace along the French and Swiss border.  On one of these visits, his father Regis, a prosperous landowner, probably agreed to sit for the solid and realistic portrayal below, typical of Courbet’s style. Once hoping that Gustave would be a lawyer, does he seem even proud to be posing, convinced now of his heir’s talent?  (Note: is he assuming a Napoleonic posture?)

French Impressionist Pierre-Auguste Renoir is one of the most prolific portrayers of children in Western art history.  So when he became a father in his mid-forites, he was likely overjoyed to have his own easily accessible models: Pierre, the first born in 1885, followed by Jean, 9 years later, and then finally Claude or Coco in 1901.

The youngest Coco appeared regularly in Renoir’s personal gallery, starting with the tenderly rendered Portrait of Claude, reflecting already the bond between the two generations.

But Renoir’s contemporary, American Impressionist William Merritt Chase (1849-1916) heads the list of artist fathers, making his daughters central to his creative production. Tracing their development from infants to early womanhood, Chase reveals their individual personalities as they mature, often utilizing the vibrant color and light of Impressionism.  Sometimes, as in I Am Going to See Grandma, the child is unidentified (although that is Mrs. Chase helping in the preparations).

But usually the subject is known as in Did You Speak to Me? where Chase’s oldest Alice asks us a question.

William Merritt Chase, Did You Speak to Me?, c. 1897, oil on canvas, Butler Institute of Art, Youngstown, OH

William Merritt Chase and His Family

The quote of Gustave Courbet is from Larger than Life: Courbet, Smithsonian.com.

The information for the blog above is from a variety of sources.

And begin your summer (or autumn) with Through an Artist’s Eyes: Learning to Live Creatively!

AVAILABLE ON AMAZON & VIA PAY PAL