During the last few years, the Scottish National Gallery of Modern Art in Edinburgh has presented a series of 3 one-man retrospectives on the Scottish Colourists, who worked mainly in the first half of the 20th century.  This trio of artists — J.D. Fergusson, S.J. Peploe, and F.C.B. Cadell — have been experiencing a revival, drawing crowds of admirers with their canvases of vibrant color and fluid brushstrokes filling the galleries.

Currently, it is John Duncan Fergusson’s turn at the museum until June 5, where his early The White Dress: Portrait of Jean is on display. 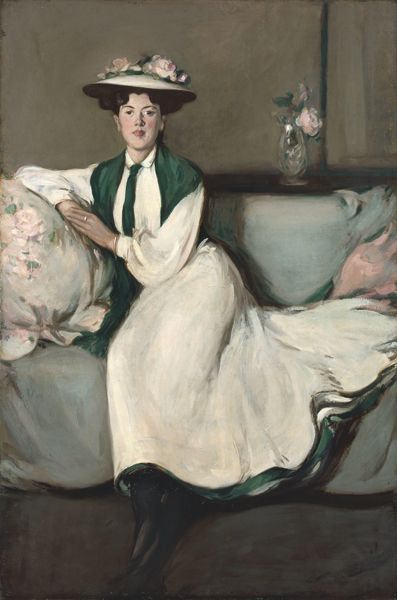 and Samuel John Peploe’s show was held the year before in 2013. 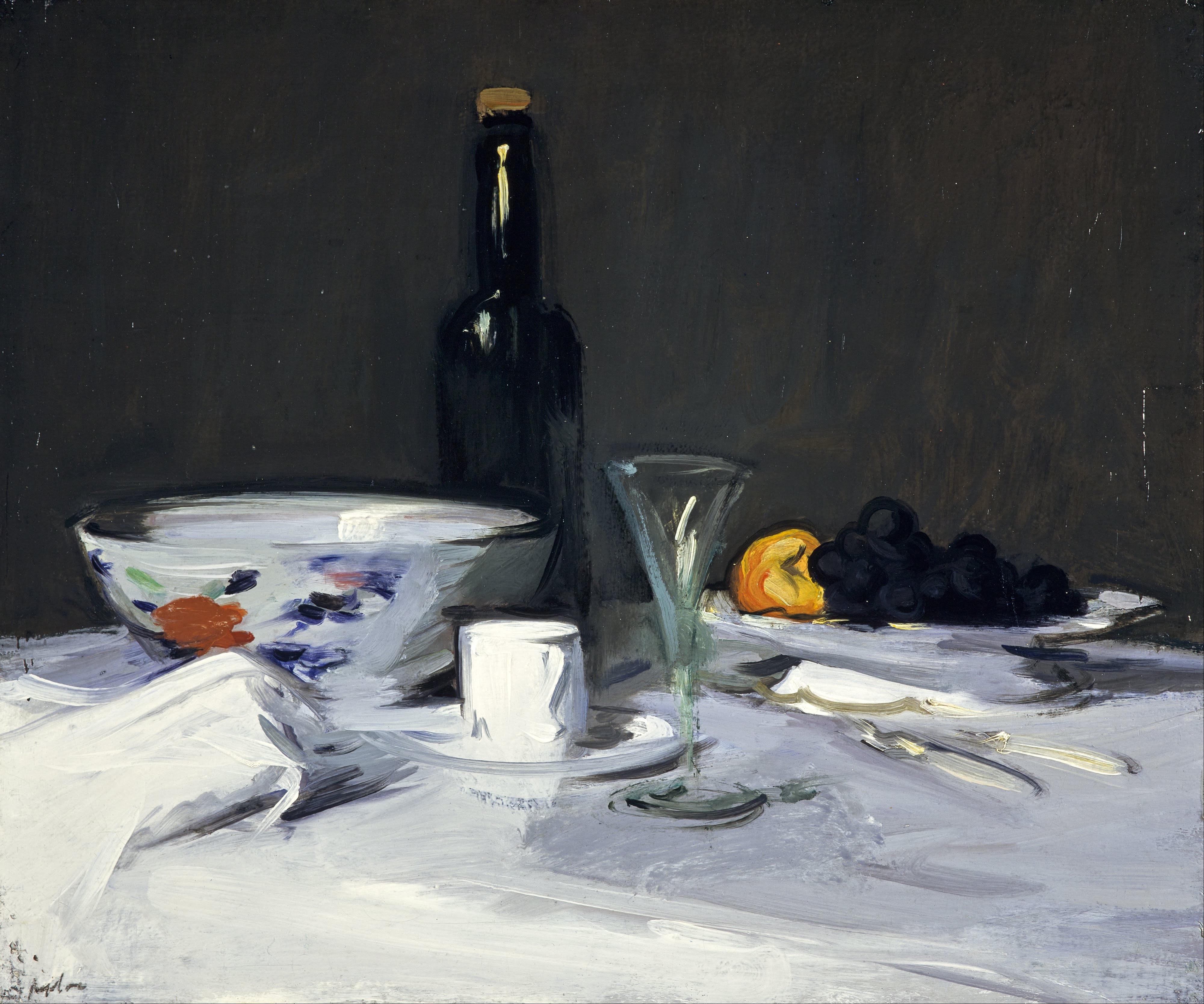 However, I’d like to focus on Francis Campbell Boileau Cadell, the first of the group to be honored with an exhibition in 2012. Born in Edinburgh in 1883, Cadell, like Fergusson and Peploe, was an aficionado of French art.  All three of them at some time in their careers lived and studied in Paris, absorbing the styles of both Impressionists and Post-Impressionists as well as contemporaries such as Matisse.

Cadell also traveled to Venice in 1910, visiting architectural wonders like St. Mark’s Basilica which, in Florian’s Cafe,  he has transformed into an Impressionistic mirage of rainbow hues. 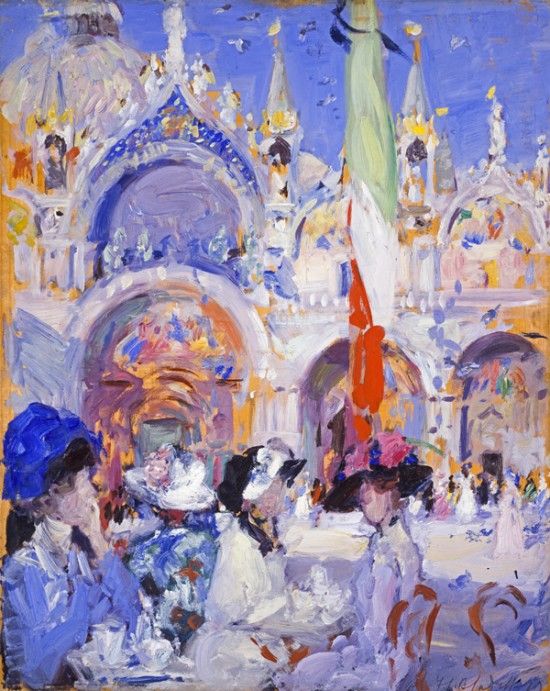 Cadell’s progress as a painter was interrupted by World War I when he served in the military.  Afterward, he returned to his home in Edinburgh and entered an entirely new period of creativity.  Here, in Portrait of a Lady in Black, Cadell has produced a striking portrayal of sophistication and high fashion, reducing his palette to basic black with touches of white, pink, and lavender.

Notice, too, that Cadell has posed his model by a fireplace, which is in his residence located in the upscale New Town section of the city. 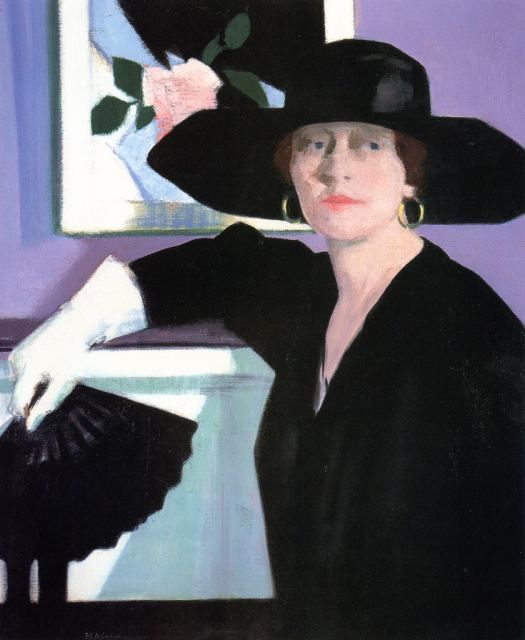 For in the 1920s, Cadell’s address at Ainslie Place, represented his status and prosperity as a professional artist.  His house was also a work of art, inspired by the then popular Art Deco movement.  In Interior, for example, the design of his parlor or living room, is almost pristine, decorated with only a few pieces of furniture and minimal objects d’art, accented with bright shades of yellow and orange. 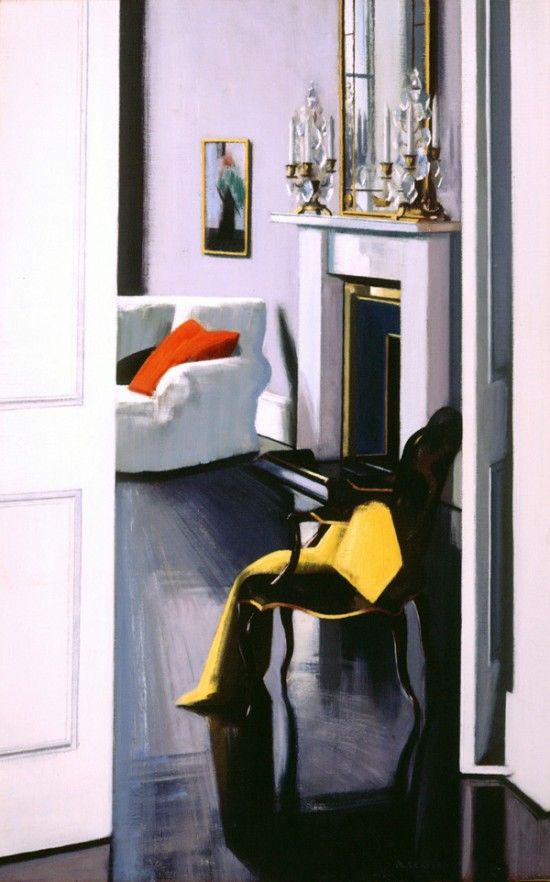 Cadell also invites us into the corners of his rooms, offering a close-up view of an emerald green bottle nearly merging into one of his own still lifes, 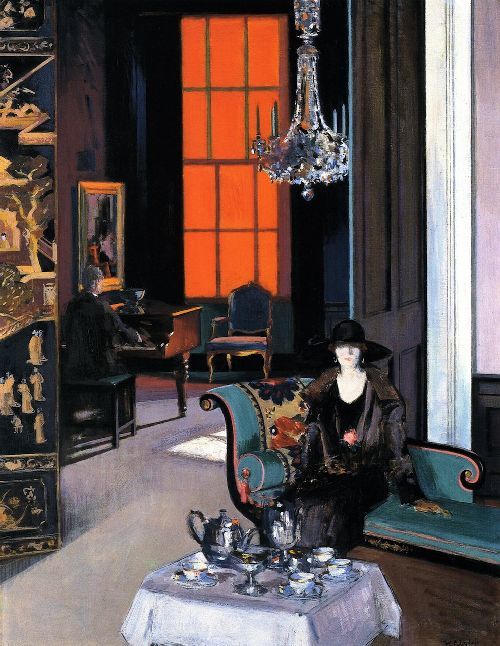 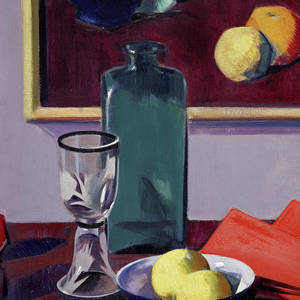 or a fragment of a priceless lacquer screen, forming the backdrop to his casual arrangement of flowers and dishes. 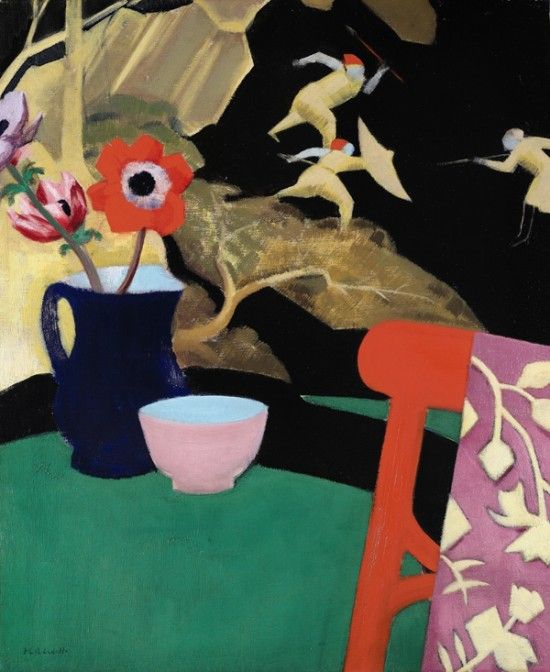 But the Orange Blind is Cadell’s piece de resistance, a revelation of his urban paradise: the treasured silver tea set, the antique furnishings, and opulent chandelier that hangs like an exclamation point over the chicly dressed woman on the sofa.  While the edge of the familiar Asian screen leads our eye to a man playing a piano, partially illuminated by the warm glow of the window’s light.

By the time Cadell died in 1937, he had been forced to move from Ainslie Place, no longer able to afford his affluent lifestyle because of the declining demand for his works of art.

Fortunately today, his reputation is being restored in both Scotland and around the world.

The sources for this blog are from various websites on Scottish art.