Would you like to join our ART CIRCLE virtually via this blog?  Usually I lead a participatory art series in the local community and one of our most popular sessions focuses on landscapes created by a variety of  artists, including Leonardo da Vinci, John Constable, Claude Monet, and Vincent van Gogh.  We explore their often panoramic views of the natural world, sharing our individual observations and feelings.  Among the points we consider, for instance, are elements of style such as the impact of color and light as well as experience of space.

So what do you think of this gallery of scenic paintings, which are arranged chronologically, from one of the first landscapists Bruegel in the 16th century to Gustav Klimt, one of masters of early modern art. Do you have a preference for one artist’s interpretations of the environment?  If so, why? Or are you drawn to the visions of several of the painters presented? For instance, how does Constable compare to Monet?  Or Van Gogh to Klimt?  And ultimately, do these works of art enhance your own life, expanding your personal and spiritual horizons.

Plus, any artists you wish I had included.  If so, who?

I’ve provided a brief biography of each artist at the end of the blog.

UPDATE:  HERE ARE SOME OF THE COMMENTS FROM OUR ART CIRCLE PARTICIPANTS.  I WOULD LIKE TO THANK ERIK BROMLEY IN PARTICULAR BECAUSE OF HIS DETAILED OBSERVATIONS AND FEELINGS ABOUT TWO OF THE PAINTINGS INCLUDED IN OUR GALLERY.

I would like to invent a narrative about the people and animals….also to consider humanity’s relationship to nature.

I was not drawn to the Bruegels in general because they did not have the grace or vividness of other artists.

From Erik–This painting instantly stood out for me because I felt I was back in Maine.  The light is amazing, although still rather gloomy. The absence of light not very realistic…should have a bit more light….Rather good contrast but simple things should be done in more detail. For instance, more color in the ice-skaters, not just black. The hunters are better but need to be brighter….Good detail, including cat with dogs and sign and village below.  But still lacks a tiny bit, but enough to LOOK LIKE A PLACE  YOU COULD WALK INTO…Overall vibe is gloomy but still just fine. 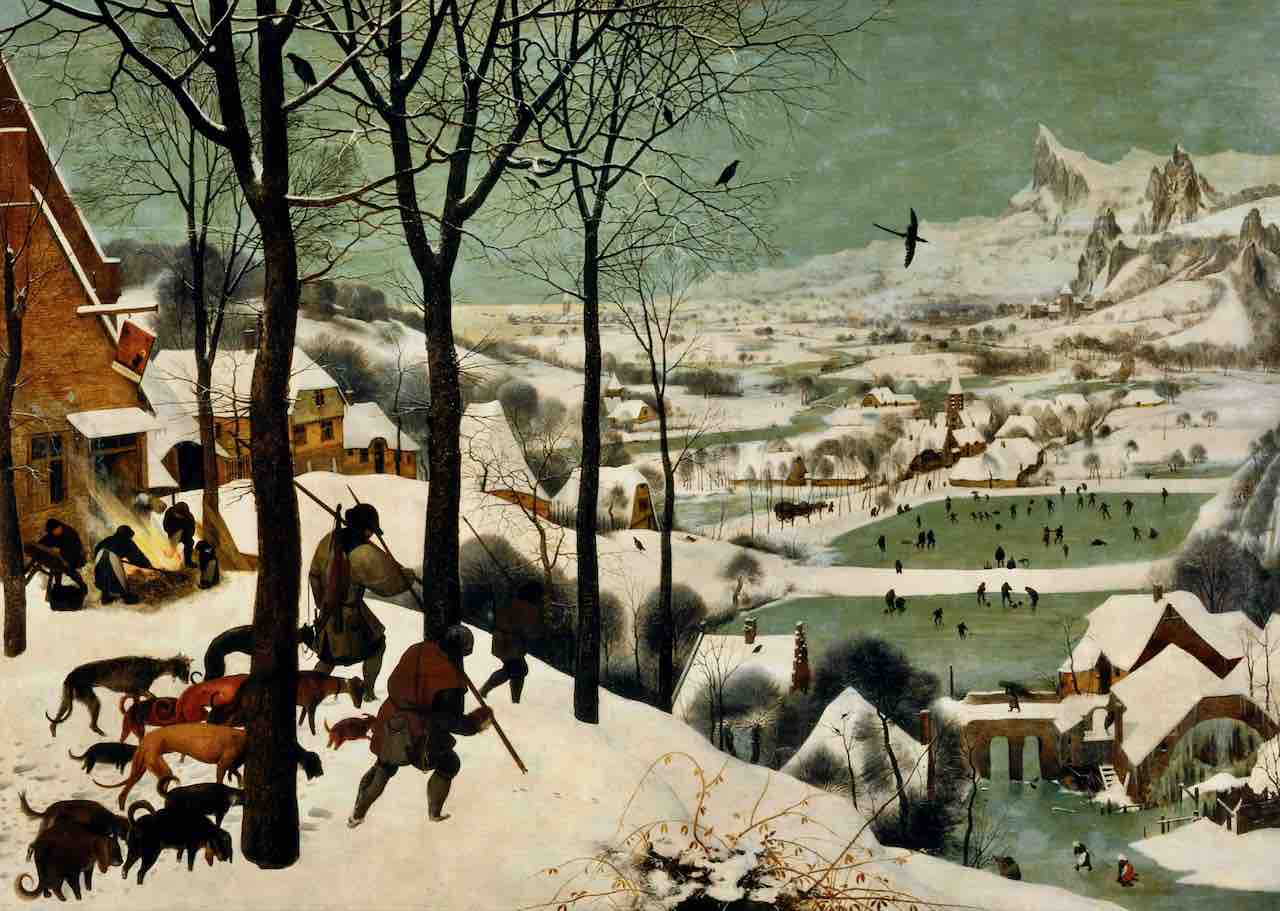 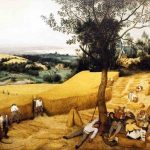 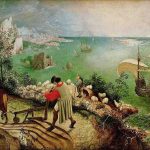 CONSTABLE—A JOURNEY THROUGH THE ENGLISH COUNTRYSIDE

There is a calmness about his works….that entices the viewer…

The peacefulness of the clouds—especially in these times. 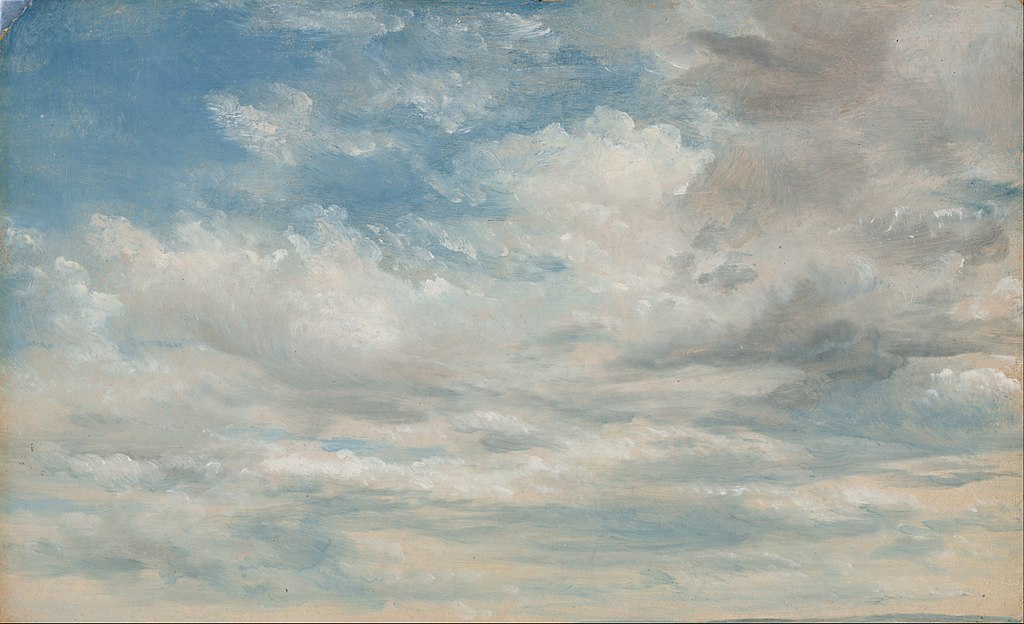 Erik’s comments—A feeling of peace you have when going to the countryside. A feeling of deja vu but can’t tell you why…the light is ultra-realistic…astounding painting…Salisbury Cathedral is beautifully lit up. Foreground realistically shaded and dappled with sunlight….Darkness is also amazing. Rare spots of black on cathedral very good. Shade makes me feel cold but in a good way…..Good contrast….Detail also amazing, particularly in cathedral but also the grove of trees. I FEEL THAT I’M IN THE PICTURE. Vibe certainly happy, warm feeling like beginning of summer. 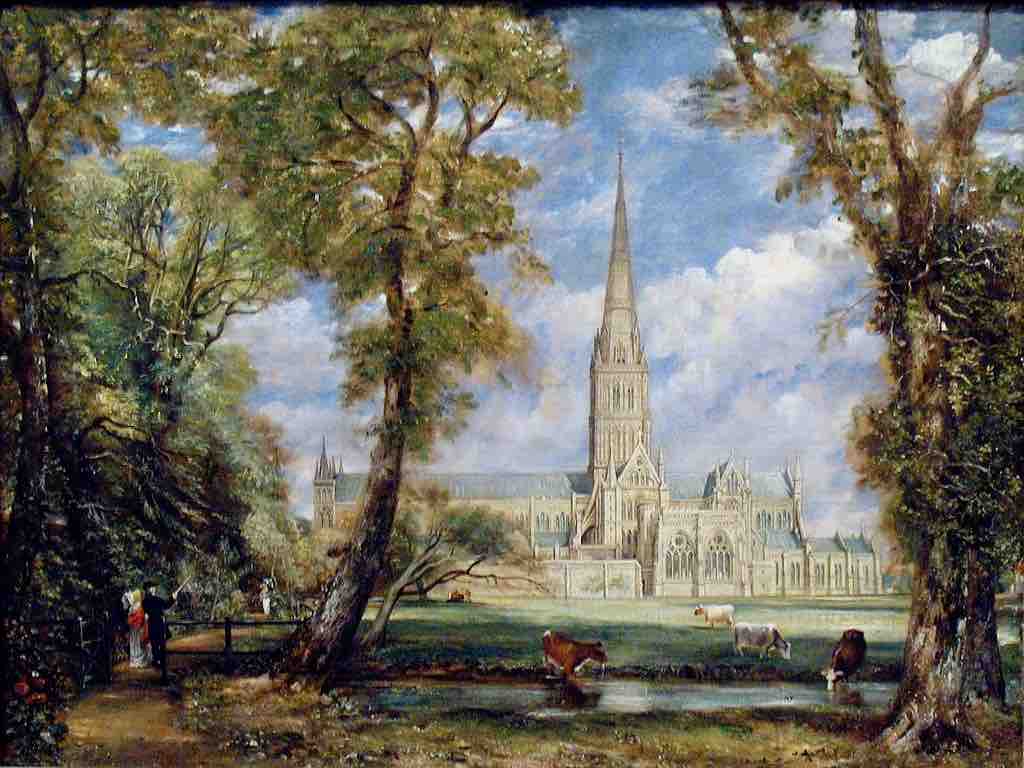 All the landscapes are very appealing but Monet and Van Gogh are my favorites. 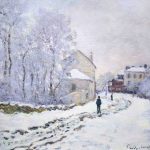 In Monet’s Poppy Field, the color GRABS the viewer! 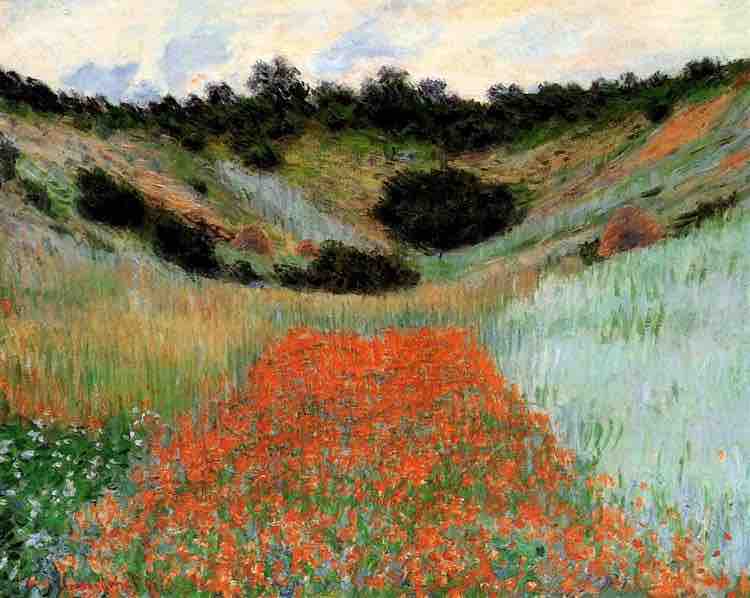 I LOVE Van Gogh, particularly the magic in his use of colors and brushstrokes.  I like the the flowering garden and the two wheat fields, but the other painting is not my “cup of tea.” 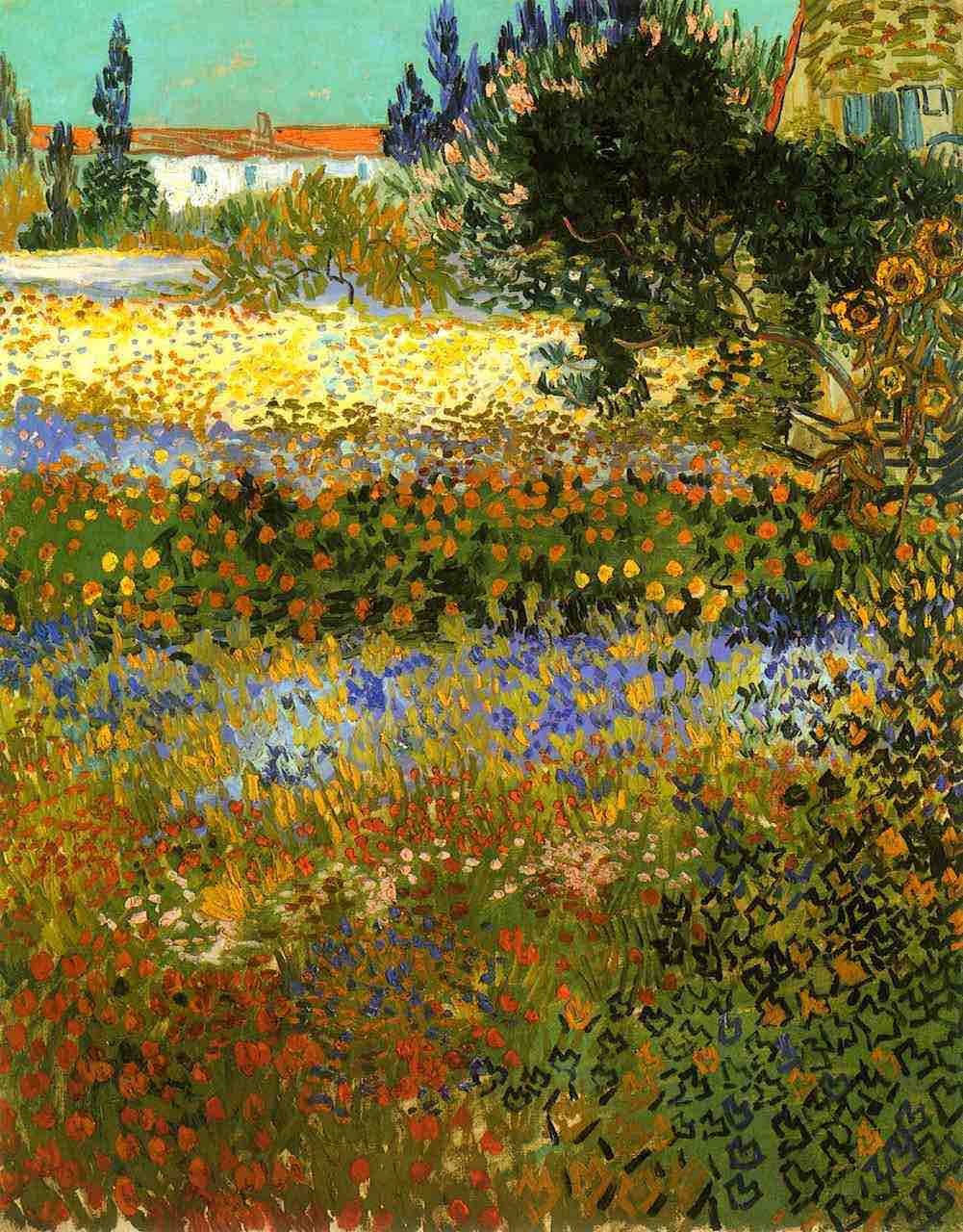 I like the perspective in Avenue of Poplars…it pulls the viewer into the scene. 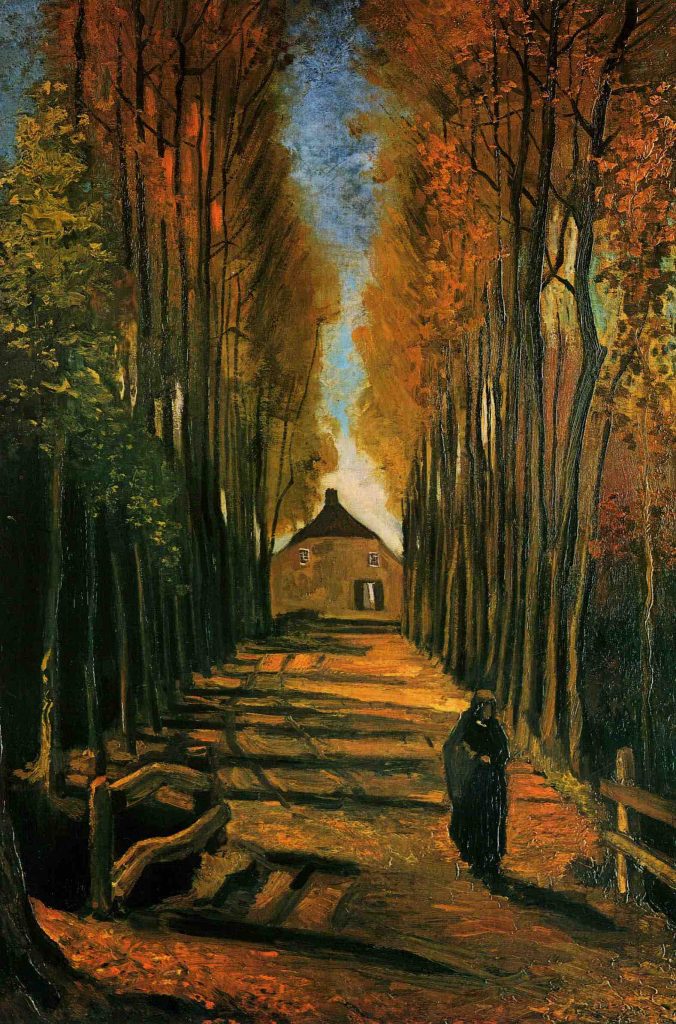 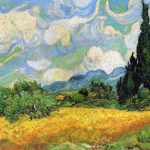 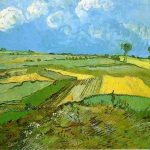 Landscape is my favorite, but until you asked the question, I didn’t realize it was! 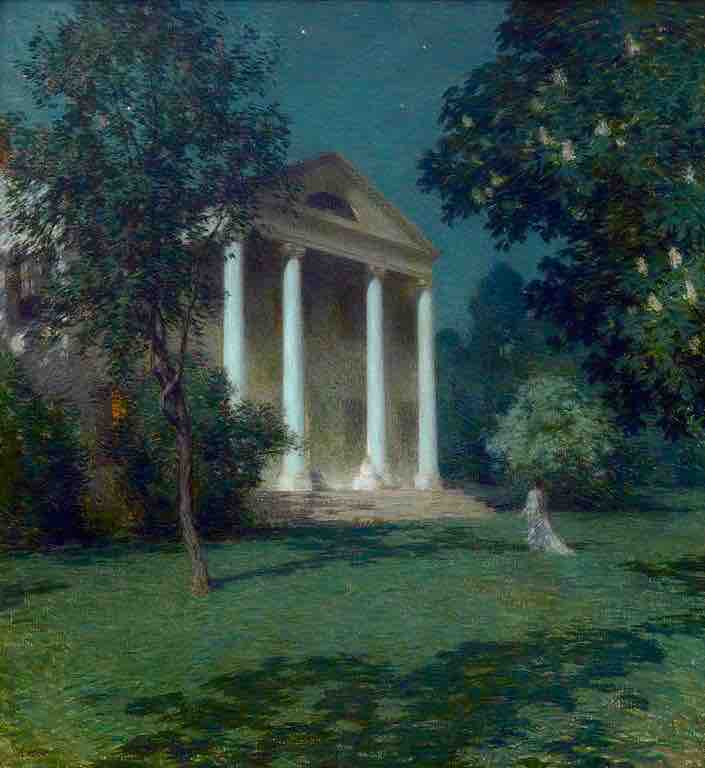 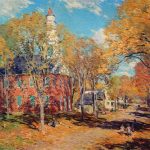 My initial response is to color—in Monet’s Poppy Field, Van Gogh’s Flowering Garden, and Metcalf’s Indian Summer (how come I haven’t heard of this artist before). 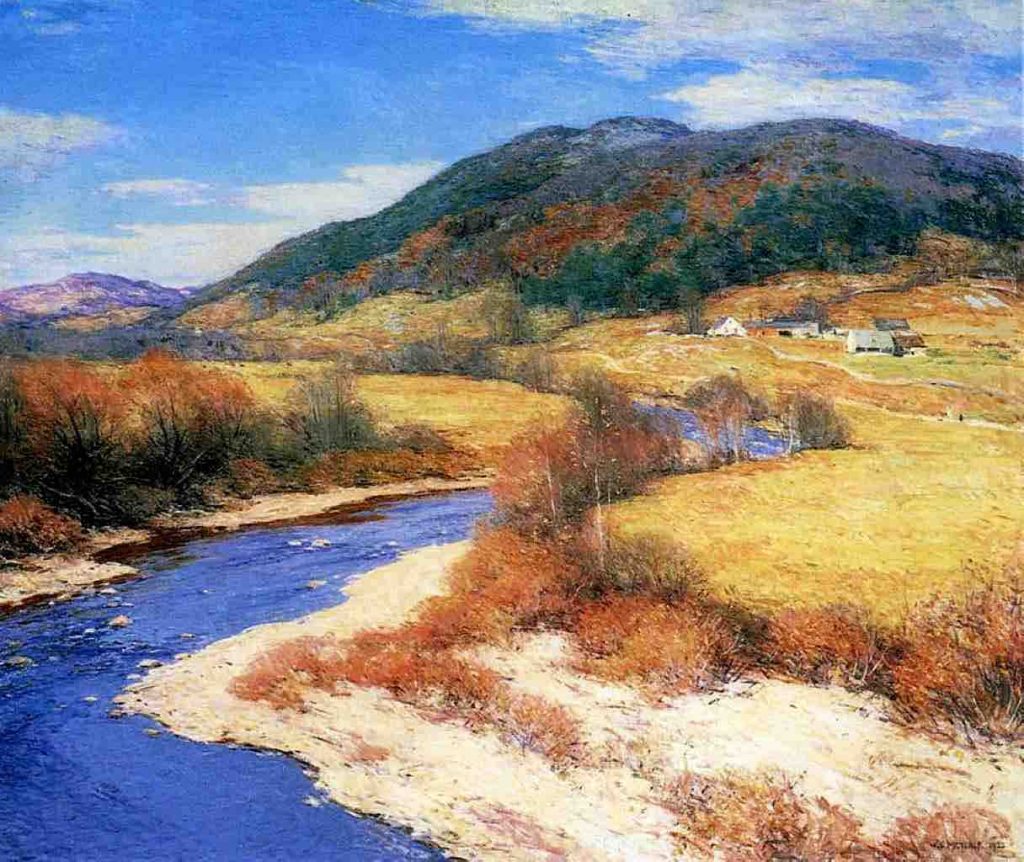 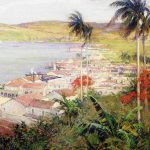 I found the colors and patterns especially striking. 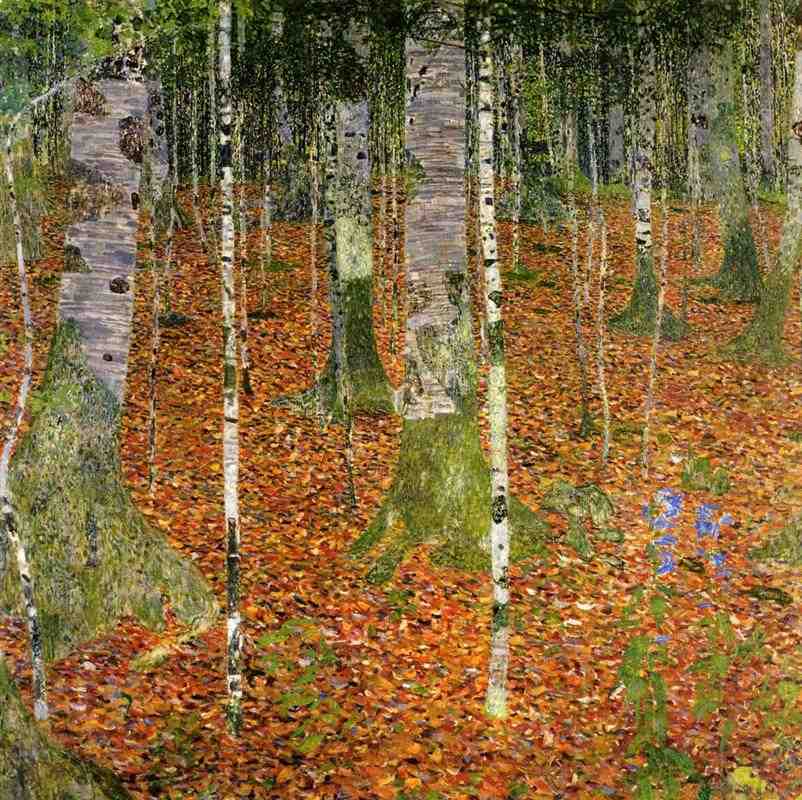 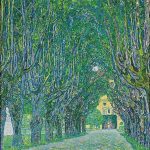 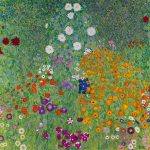 Pieter Bruegel the Elder (1525/1530-1569), an artist of the Northern Renaissance.  Born in Brabant, in what is now Netherlands. Lived mainly in Antwerp and Brussels. One of the first landscape painters in Western art; also renowned for his peasant scenes. His two sons pursued artistic careers.

John Constable (1776-1837) was born in Suffolk, England and immortalized his native county in what are now beloved landscape paintings. Constable focused on the changing conditions of nature, such as  light, color, and the movement of clouds in the skies.

Claude Monet (1840-1926) was born in Paris, but grew up along the coast of Normandy. Considered a leader of Impressionism, revolutionary style in art, introduced a new range of vibrant colors and use of often thick, individual brushstrokes.  Like Constable, Monet captured the fluctuating moods of  the natural environment around him, from the Seine River basin to seascapes of the Riviera to the waterlilies of his own backyard in Giverny.

Vincent van Gogh (1853-1890), supported by his brother and art dealer Theo, began his artistic and spiritual quest in his home country of Netherlands and then later France. Communicating his love of the natural world with expressive, dynamic brushwork and bold, intense color, Van Gogh transformed our relationship to landscape.

Willard Metcalf (1858-1925) was from New England and although he spent time abroad in locations like Giverny, France, his most significant work done in the region where he grew up, especially in Vermont, New Hampshire, and Connecticut.   Metcalf is also generally categorized as an American Impressionist and has been considered as visual counterpart of poet Robert Frost.

Gustav Klimt (1862-1918) is famous for his “golden” paintings, such as The Kiss and Portrait of Adele Bloch-Bauer, created for the artistic circle of cultural metropolis of Vienna where he always lived. However, Klimt’s often moving landscapes are less familiar, inspired by Lake Attersee and surrounding woods, just outside of Vienna, where he resided almost every summer.