So enjoy the many moods of the season without having to venture outside! 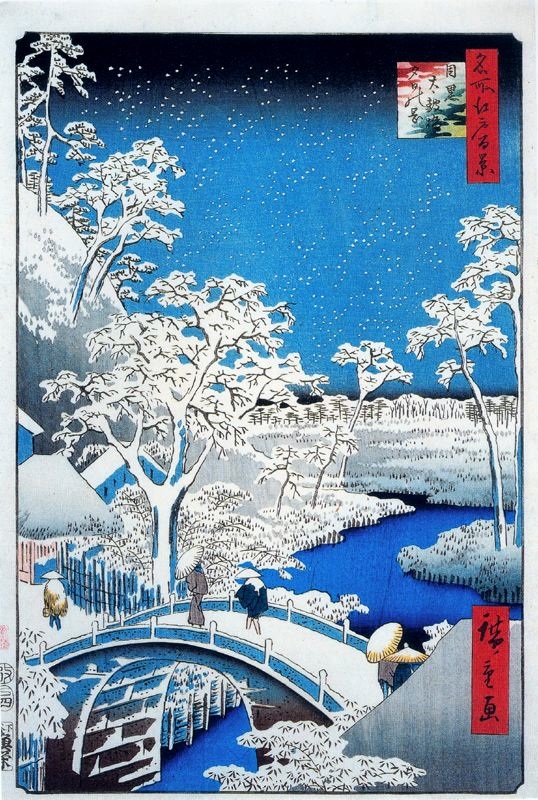 A vivid blue and white dominate the landscape of snow falling.  The trees, land bridge are all covered by white snowy dots.  Nature dominates the scene.  The people are very small.  I thought the Gibran was perfect to accompany the art.

The Hiroshige drum bridge is one of my favorites.  I love the juxtaposition of the blues and whites.  I wish I knew what it says on the three banners.  The flatness of Japanese prints is very appealing to me. 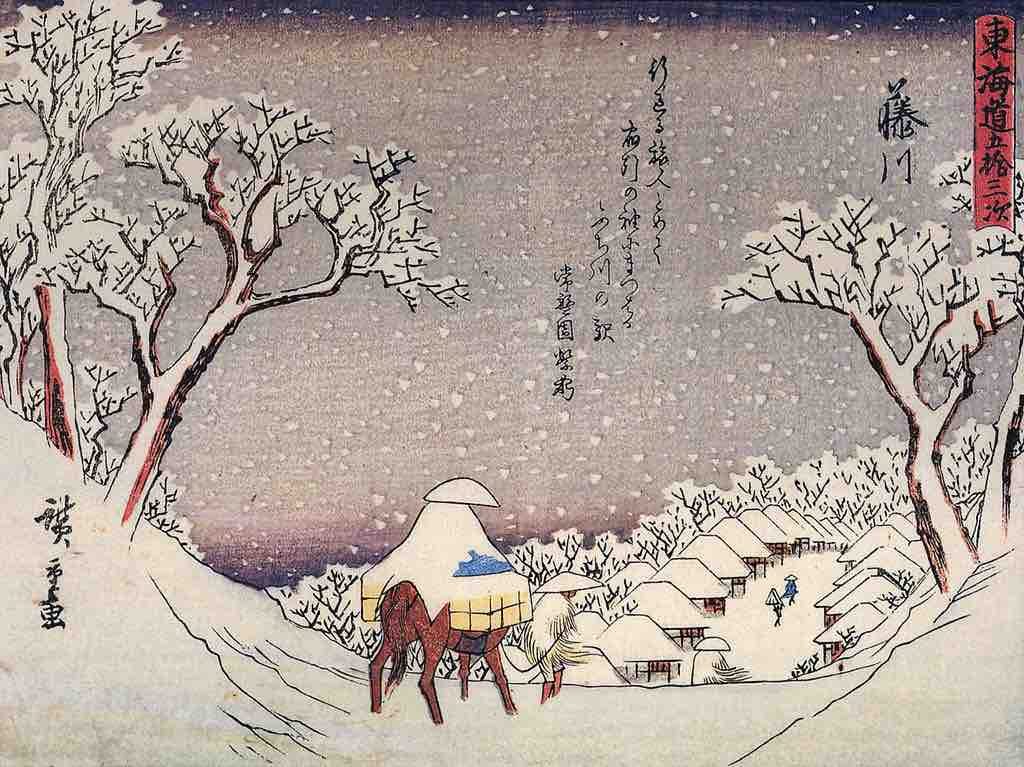 All Heaven and Earth 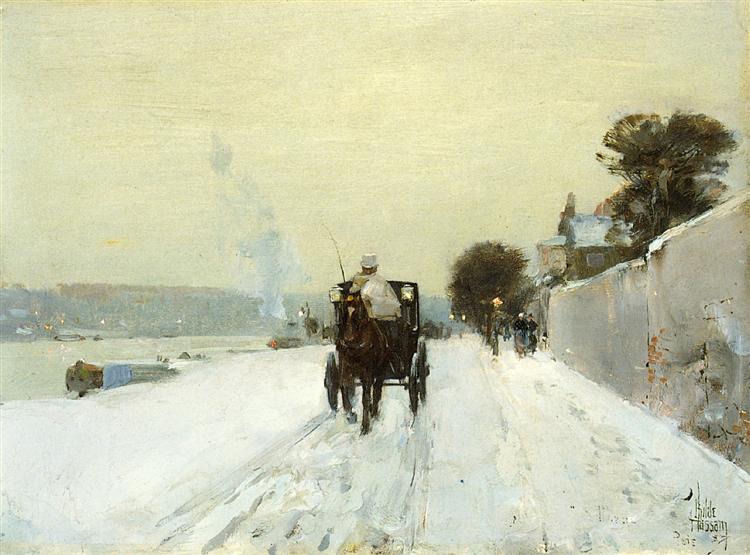 The evening sky, and pale from left to right

A hundred bridges leap from either quay.

Pillared with pride, the city of delight

Snow scene with boats and the smoke from the boat.  There’s a cloudy and yellow sky.  The horse and carriage are centered but the human figures are quite small.  Willa Cather’s comment is a good coupling with the art.

The Childe Hassam was a surprise because I wasn’t familiar with his Parisian paintings.  I associate him with New York City and New England.  The use of a Willa Cather quote for his work was surprising but quite apt… 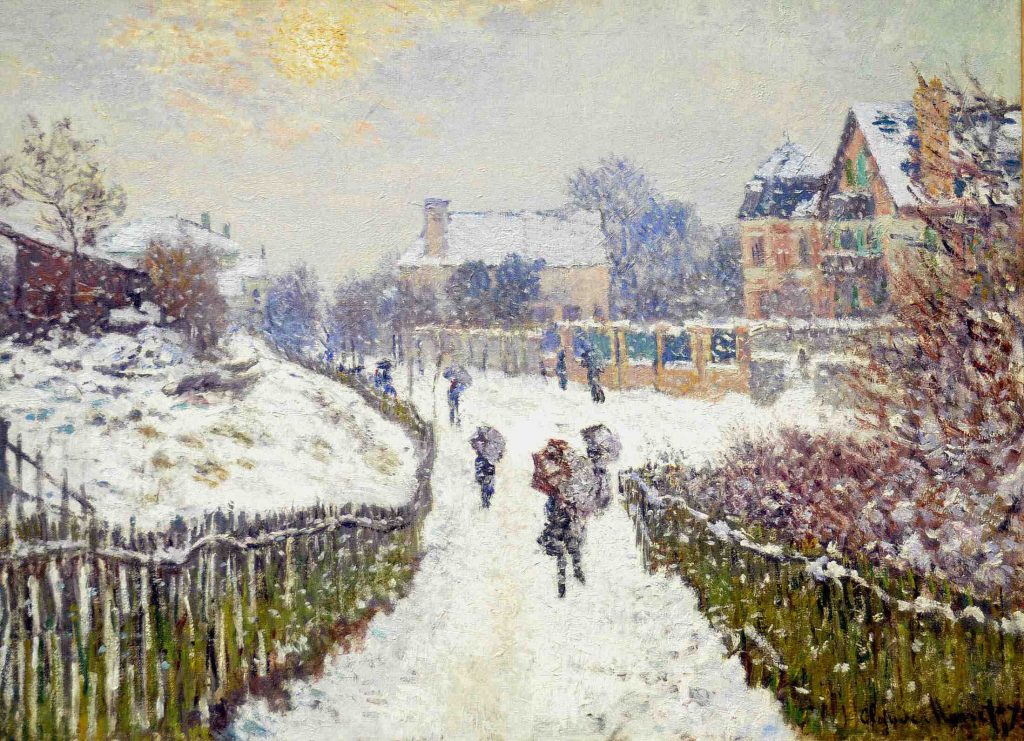 It is the life of the crystal,

the architect of the flake,

the fire of the frost,

the soul of the sunbeam

This crisp winter air is full of it.

Pale sunlight on the upper left of the painting but a mostly gray and cloudy sky.  Snow is falling.  The paths converge into the center of the painting.  Brrr.. People heading out are very bundled up against the storm!  The Burroughs quote is an absolute poetic description of winter weather and the scene Monet painted for us.

Monet’s winter scene in Argenteuil was also quite a surprise because it always seemed in my mind like a place of eternal sunshine, blue skies, and flowers.  Here the pale winter sun almost makes it seem colder. 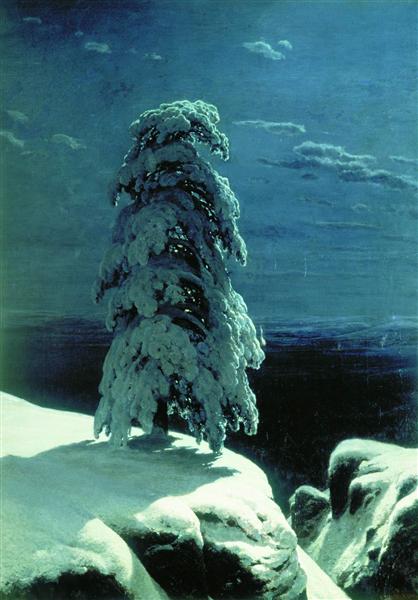 One must have a mind of winter

To regard the frost and the boughs

Of the pine trees crusted with snow;

A snow burdened pine is surrounded by the snow covered ground.  There’s a blue sky with clouds and the dark blue lower part of the painting…is that the sea?  And the light is so bright….Is it moonlight?  The Emily Dickinson quote from The Snow Man is perfect for this art. 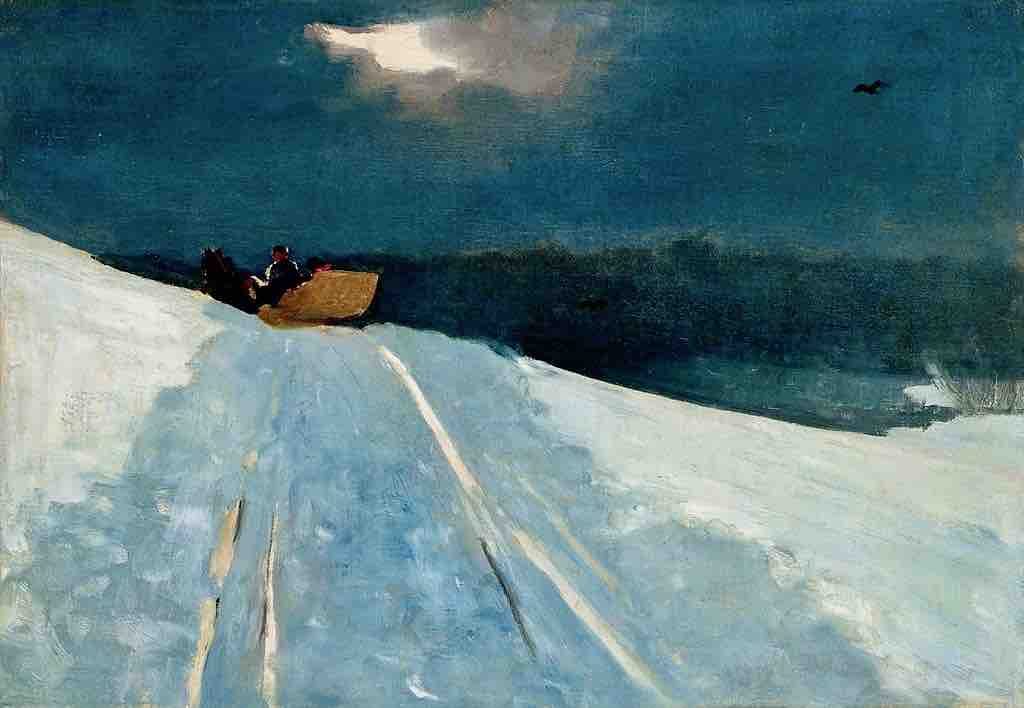 Announced by all the trumpets of the sky,

Arrives the snow, and, driving o’er the fields,

Great piles of blue shadowed snow…a sleigh moves off and out of the landscape.  Such light reflected on the snow.  I would love to ride in that sleigh.  And Emerson reflects on winter weather in “The Snowstorm.”

In Homer’s Sleigh Rise the sky seems as ominous as in his storms at sea and the sleigh seems as alone as any of his boats at sea with just another solitary bird in the sky. 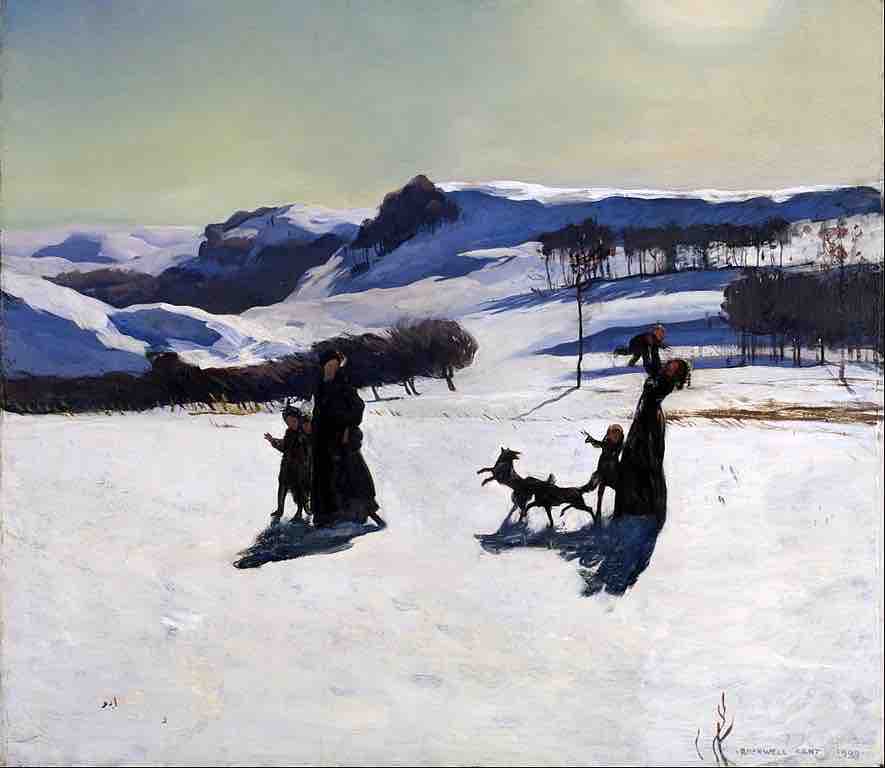 Laughter is the sun that drives winter from the human face.

When I looked at this art, I first saw people and pets enjoying a snowy day outdoors.  Then I noticed the deep  blue shadows and bright light of the scene (and that pale sun).  People are at the center of the landscape but they do not dominate the snowy scene.  Victor Hugo relates some wisdom to this scene. 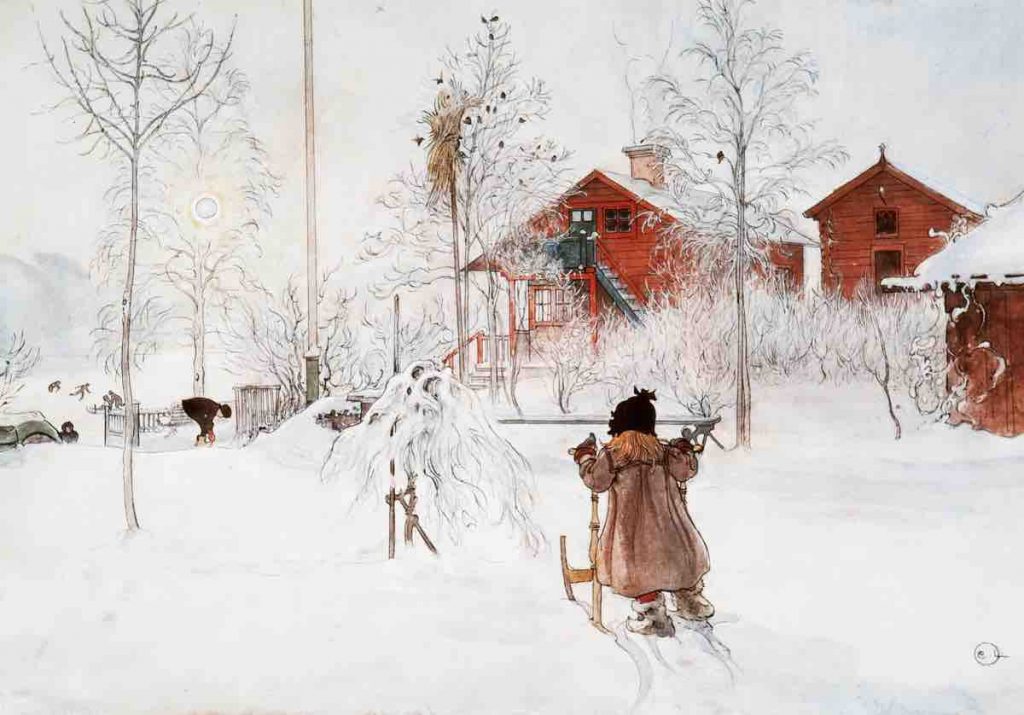 One kind word can warm

This is my favorite winter scene!  I can enter it and feel part of the cold white environment.  The pale sun and delicate bare trees and the birds on those branches.  And in the center a child faces away from the viewer with the sled…and there are also some skaters.  It all appeals to my senses.  It really resonates with me (a born and bred Midwesterner).  I loved the Japanese proverb that accompanies this art.

The Carl Larsson is another of my favorites.  I like the different planes in the painting—the child in the foreground, the trees she’s looking at with the lone bird in one and so many in the other one, the figure bending down on the left, the figure just beyond the gate, and the faraway figures skating each in their own world.

What good is the warmth of summer, without the cold of winter to give it sweetness.

The woman walking in the snowstorm is mostly covered by a large “umbrella.”  In the left foreground there is a snow laden pine.  My eyes are drawn to the red temple that fills the remainder of the scene.  But notice the gray snowy sky. 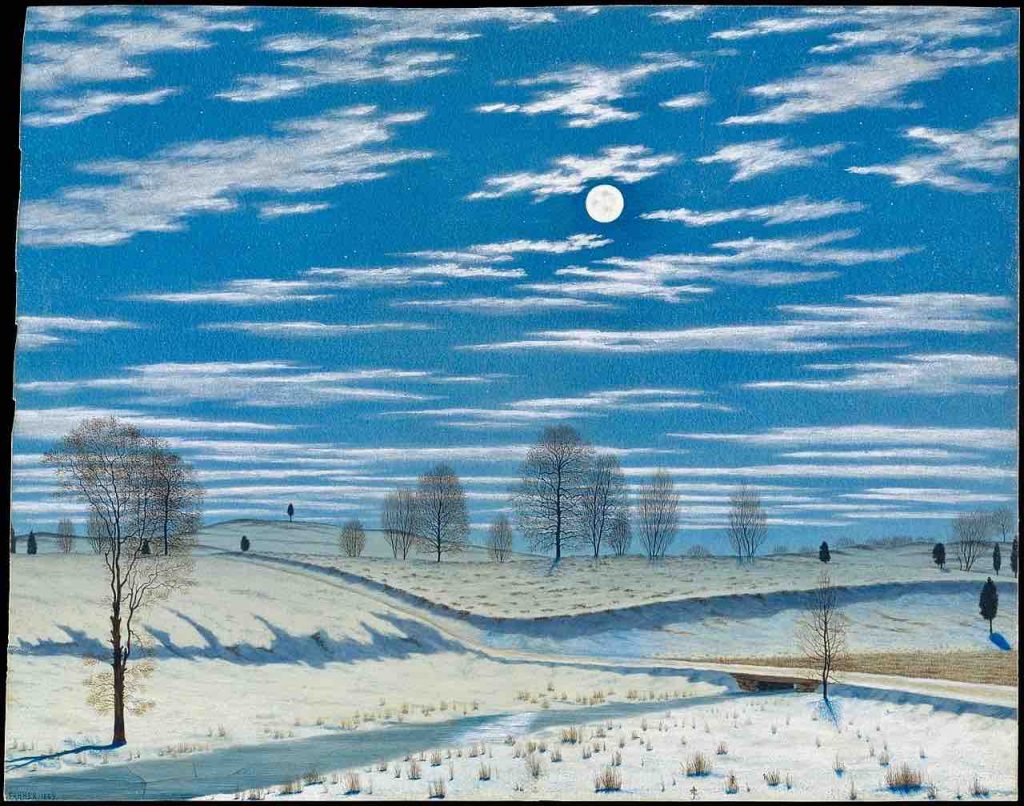 The snow and snow,

The evening would have

The great moon of December.

Here’s a serene landscape with no humans at all.  The bright full moon is in the blue sky with many white clouds…the shadows of these clouds are seen on the snowy ground.  I see frozen water and leafless trees.  I feel that the cold moonlit night as I look at the art.  Love the Basho haiku.

I wasn’t familiar with Henry Farrer but I like the painting you included which seems rather melancholy.  I noticed that it seems to be in a different style from most of the paintings I found when I googled him.