Be certain to click on the works of art to ENLARGE and ENHANCE them.

THE EMPRESS AND FABERGE

Faberge’s Imperial Easter Eggs are in the news again with an exhibition currently at the Kunst Historiches Museum in Vienna, while a second show will open at the Montreal Museum of Fine Arts in June.

The World of Faberge

Faberge: Jeweler to the Czars

The most exciting story is the discovery of another Imperial Easter Egg, once owned by Empress Maria Feodorovna, the mother of Czar Nicholas II, the last emperor of Russia.  While 43 of these treasured masterpieces have survived war and revolution, 7 still have not been located (note: this figure does not include 2 that were never delivered).  Ironically, all of the missing eggs belonged to the Empress Maria, who was the original inspiration for this Romanov holiday tradition that began in 1885. (I’ll be referring to Nicholas II’s mother as Empress and his wife Alexandra as Czarina.)

She was Princess Dagmar of Denmark, when she was initially betrothed in 1864 to Nicholas, heir to the Russian throne. However, he shortly died of tuberculosis and Dagmar, renamed Maria Feodorovna, wed the younger brother, the future Alexander III instead. 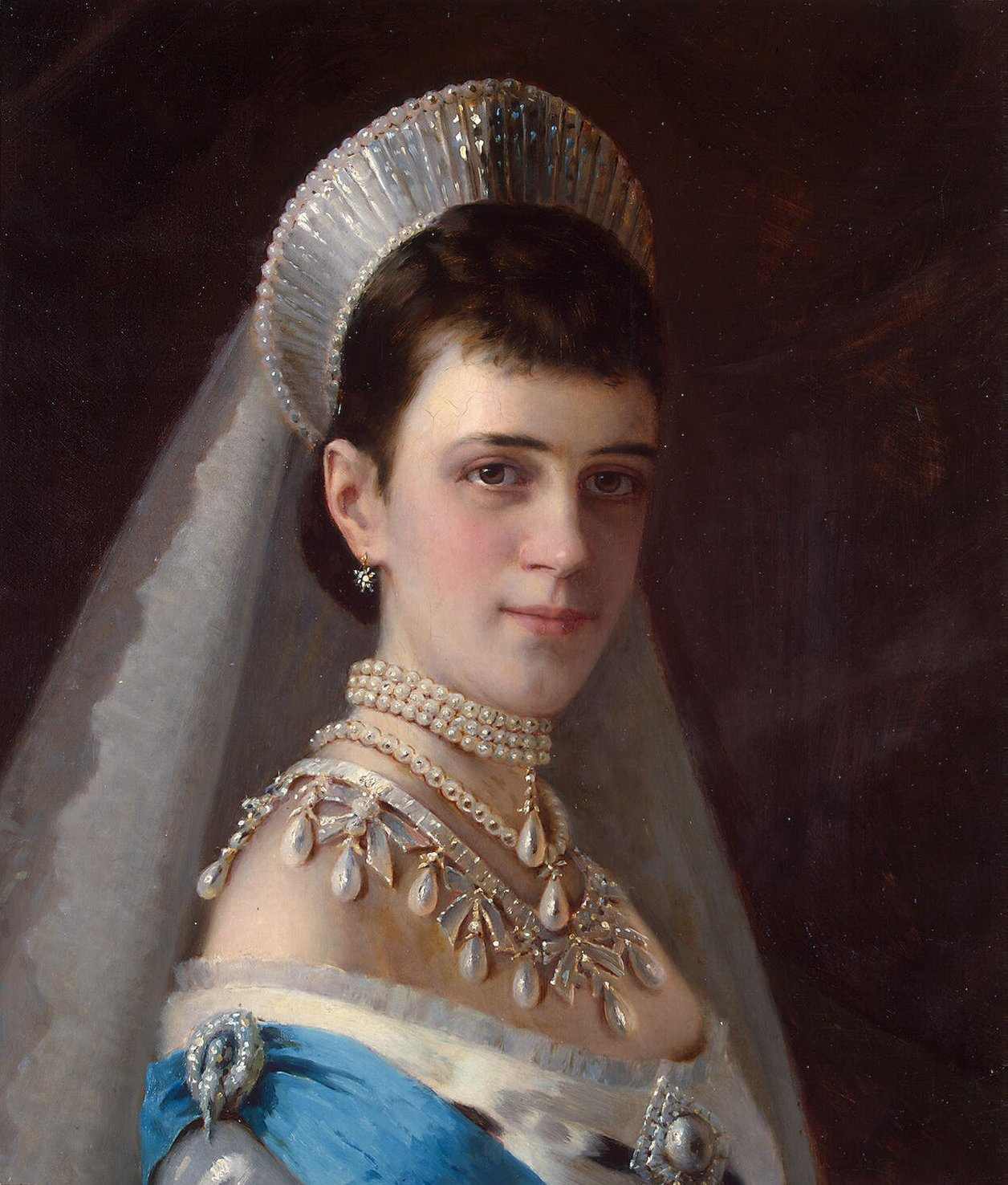 According to Robert K. Massie, author of Nicholas and Alexandra:

Russia loved this small, gay woman who became their Empress, and Marie gloried in the life of the Russian court. She delighted in parties and balls…..Seated at dinner, she was an intelligent, witty conversationalist and, with her dark eyes flashing, her husky voice filled with warmth and humor, she dominated as much by charm as by rank.*

Empress Maria and Alexander III reportedly had a successful marriage, although the over 6 foot tall czar ruled as an autocrat, tolerating no disobedience from either his children or the people of his country. In the photograph below, taken about 1888,  Alexander is decidedly the center of his family, while Maria stands demurely behind her imposing spouse; the 20 year old Czarevich Nicholas can be seen immediately to her left. 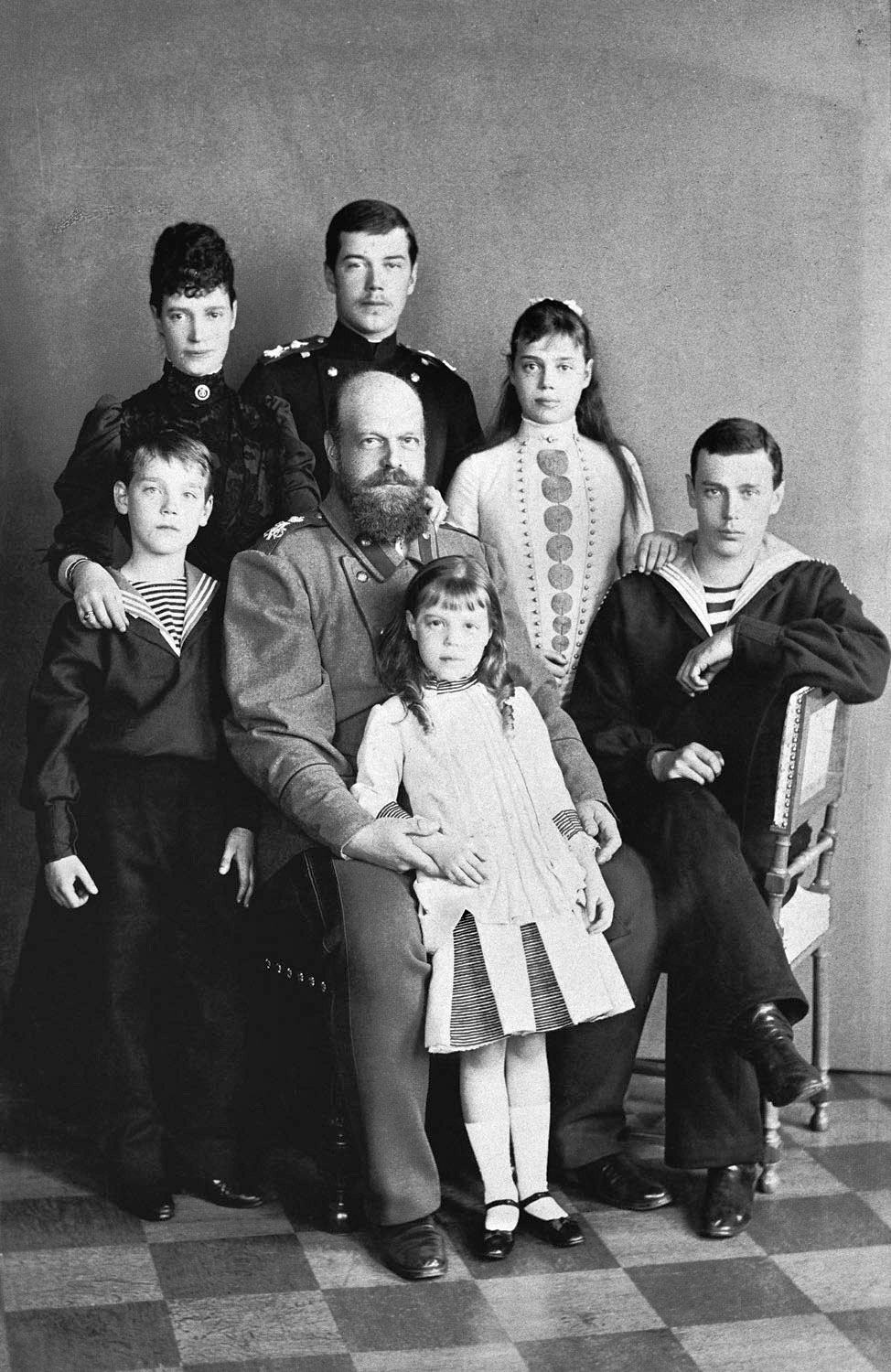 Alexander III, his Wife, and Children, circa 1888, photographed by Sergey Levitsky

Yet, Alexander III, like the rest of his subjects, could not resist  his lovely wife, always searching for ways to please her.  So in 1885 to mark the 20th anniversary of their engagement, the czar had the firm of his court jeweler Peter Carl Faberge (1846-1920) design the first Imperial Easter Egg. From then on until the end of World War I (except for a 2 year interval),  the Empress Mara could look forward every spring  to another extraordinary invention by Faberge.

For instance, the Third Imperial Egg, which just surfaced after being lost since 1922, is a dimunitive timepiece on a golden pedestal.  Adorned with a priceless sapphire and array of diamonds, it most likely delighted the Empress Maria as the ultimate lady’s watch.  And until recently, this multi-million dollar expression of a czar’s love, was in the Midwest home of its buyer who almost  had the egg melted down for $500. 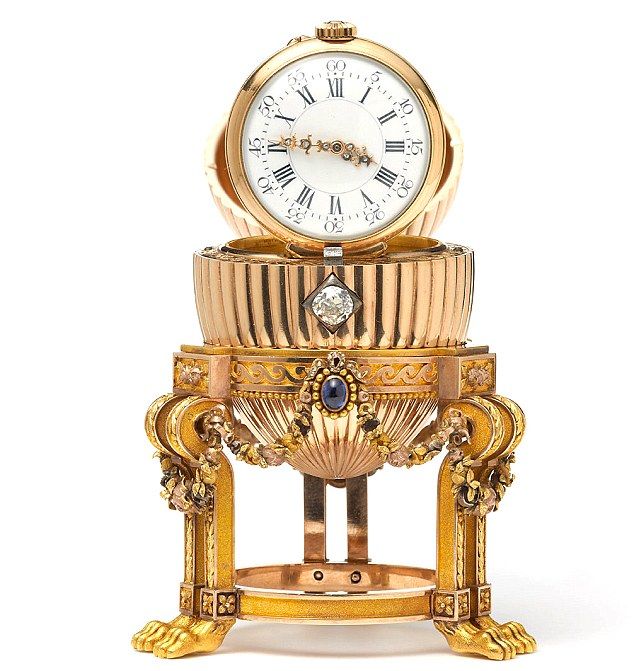 However, the Memory of Azov Easter Egg, never left Russia.  Confiscated by the Soviet government after the Russian Revolution, along with most of the Imperial Easter Egg collection, it presently resides in Moscow’s Kremlin Armoury museum. Here Faberge’s top artist, Mikhail Perkhin has combined an ornate Rococo style egg of green jasper  with the expertly crafted ship or surprise Maria would have found inside.  Created in 1891 to commemorate  the voyage of her sons, the Czarevich Nicholas and his brother Duke George on the Azov, the tiny gold and platinum cruiser has diamonds for windows and floats above a truly aquamarine sea. 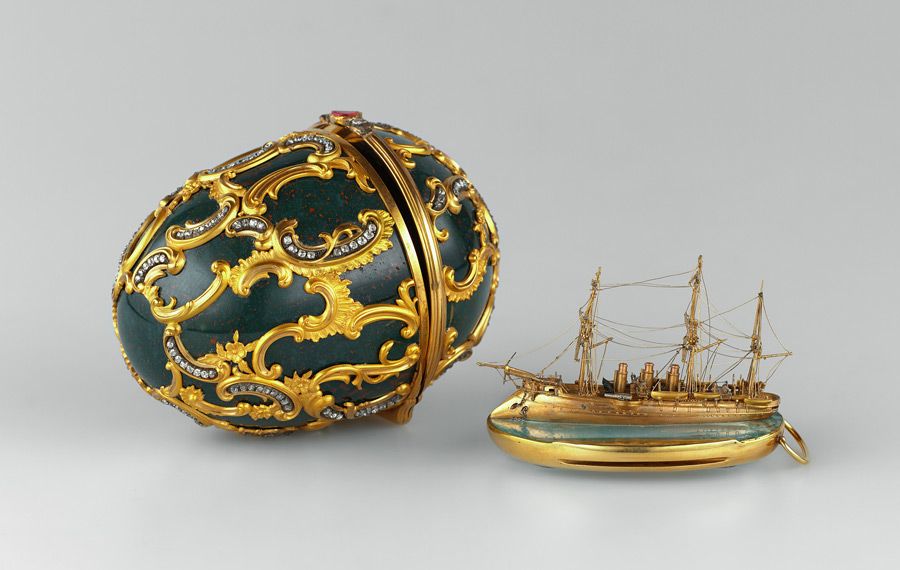 When Alexander III died unexpectantly in 1894, at the age of 49. the new czar Nicholas II would continue the annual Easter gifts, both for his widowed mother and his wife Czarina Alexandra (click below to view her fabulous Imperial Easter Eggs),

The exquisite Pelican Easter Egg of 1898, contains a unique surprise: a mini-gallery of detachable oval watercolor miniatures of 8 charitable institutions sponsored by the Empress Maria.  It was sold by the Antikvariat, an art export program under Stalin, possibly to American millionaire Armand Hammer; eventually Lillian Thomas Pratt acquired the Pelican, later donating it to the Virginia Museum of Fine Arts. 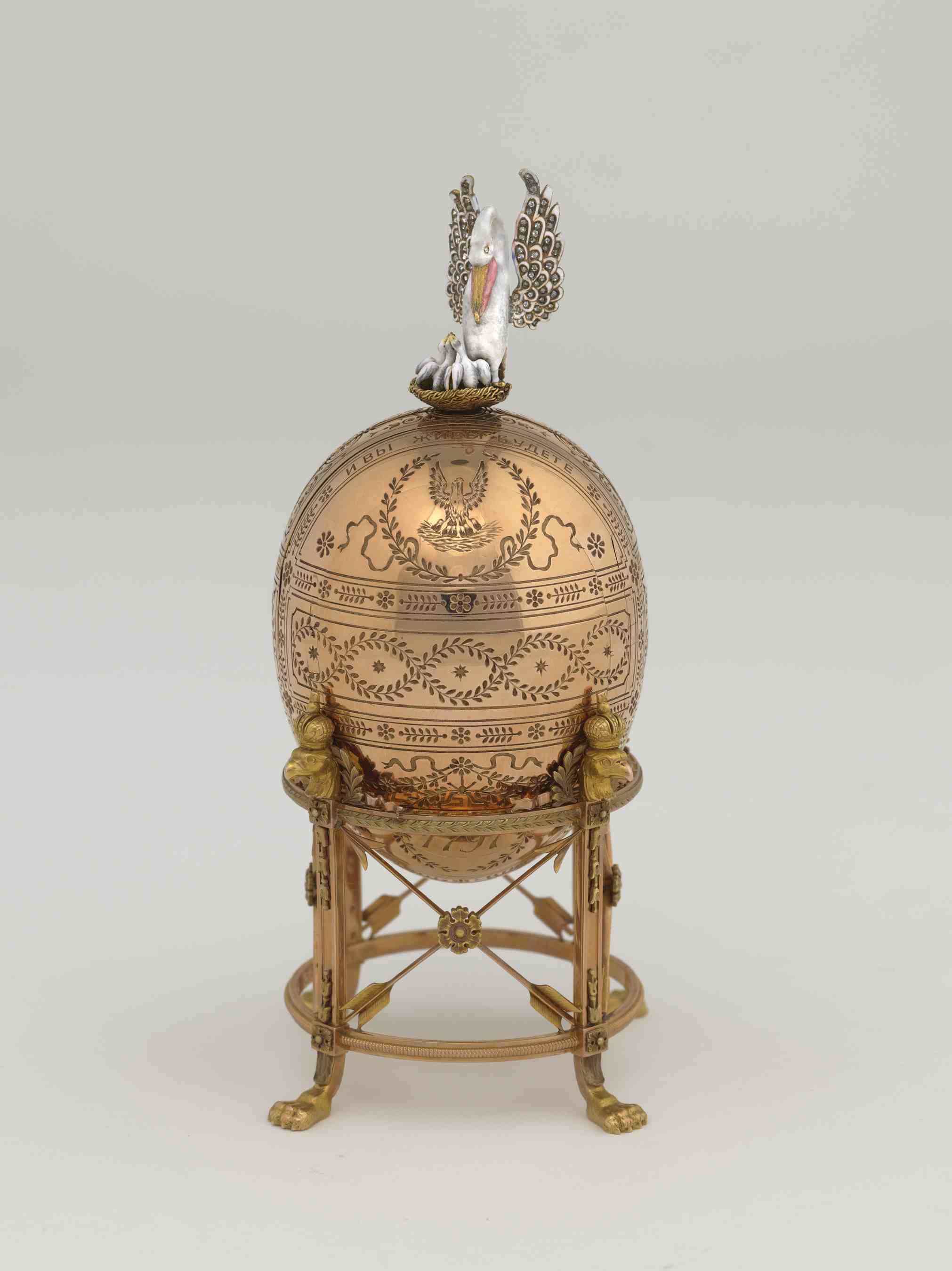 The remarkable surprise of the Gatchina Palace Easter Egg of 1901, though, is fixed to the interior.  Imagine the delight of the Empress Maria when she opened the white enamel egg, covered with delicate floral patterns and strings of pearls. For Faberge master Mikhail Perkhin has ingeniously reproduced Maria’s opulent home including such minute details as the statue of Czar Paul I in the front.

A few years later in1907, Maria’s daughter-in-law Czarina Alexandra received the Alexander Palace Easter Egg which was another tribute to a Romanov residence by Faberge . But probably the Imperial Easter eggs closest to the heart of Empress Maria were connected to her grandchildren. For example, although the Mosaic Easter Egg (currently owned by Queen Elizabeth II) was given to their mother Alexandra, the framed cameo-like profiles of the Grand Duchesses and Czarevich Alexei must have been cherished by their grandmother too.

Mosaic‘s exterior of rubies, emeralds, topazes, garnets, and other precious gems was created in 1914, during the last days of peace in Europe.  In contrast, the Red Cross Portraits Easter Egg‘s  minimal red and white composition reflects the impact of World War I just a year later. By this time, the czar’s sister Olga, the Grand Duchess Olga, the Czarina Alexandra, and Grand Duchess Tatiana pictured below were helping to care for the Russian soldiers wounded in battle. Of these four women, three—the czarina and her daughters—would soon perish, executed by the Bolsheviks in 1918. 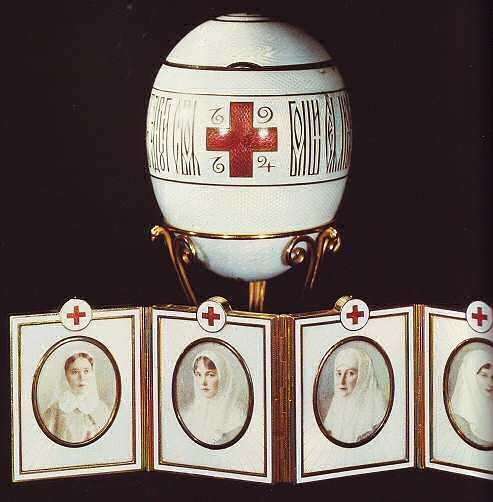 Empress Marie did escape with her life, returning to Denmark.  In the words of Robert K. Massie,

Marie never accepted the fact that Nicholas and his family were dead, although, contrary to general belief, she never met and interviewed any of the women who claimed to be her granddaughter Anastasia.  In October 1928, the gay Danish Princess who had captivated Russia as the consort of the giant Tsar Alexander III died in Copenhagen at the age of eighty one.*

This blog is based on several sources including books and internet sites; you might view Mieks website on the Imperial Easter Eggs.

Also google, Faberge & the Last of the Romanovs: A Story of Love and Tragedy

Take an art walk, discover the art of contemplation, explore new creative routines with Through an Artist’s Eyes: Learning to Live Creatively.