Time for another Art Circle blog, featuring the theme of seascapes, a refreshing escape from the heat of summer experienced by so many of us now.  So enjoy the multiple moods of the ocean, through the eyes of a variety of visionary artists such as Childe Hassam, Winslow Homer, Vincent van Gogh, and Pierre-Auguste Renoir, among others.  And as usual your ideas and comments are always welcome!

My soul is full of longing

for the secret of the sea,

and the heart of the great ocean

sends a thrilling pulse through me. 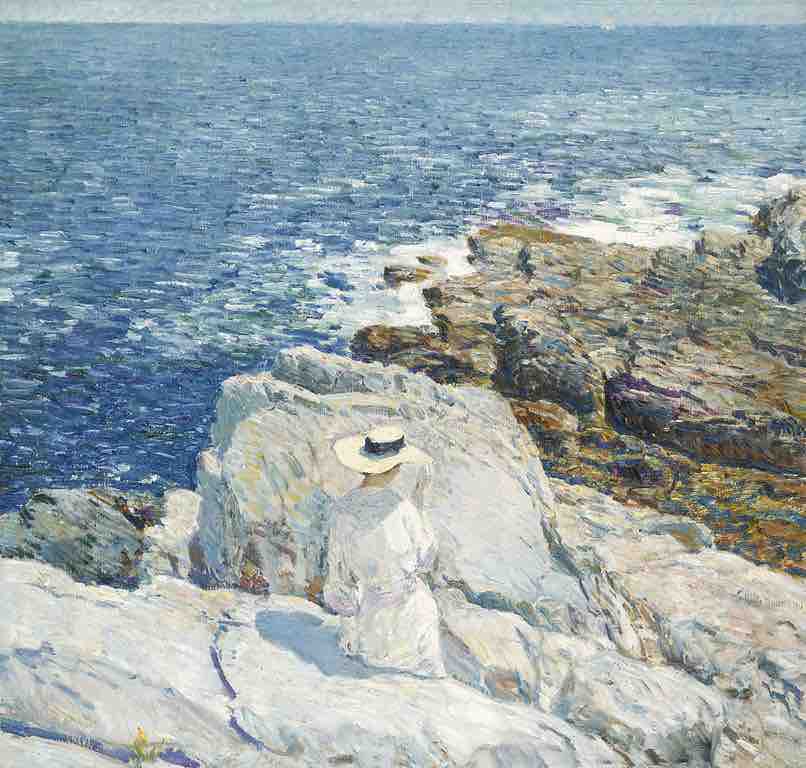 THE SOUTH LEDGES is a lovely Impressionist painting of rocks and sea.  I think I can hear the waves against the rocks!  The light is what brings the painting to life.  I love the solitary figure (so remote and small) with her back to the viewer.  Hassam is a genius in this seascape!

I like the strong diagonal and procession of white, then brown, then blue. In the distance on the right third of the horizon there is a small white, seemingly square shaped object—is it a boat, lighthouse, or an object on a nearby island?

I must go down to the seas again, for the call of the running tide 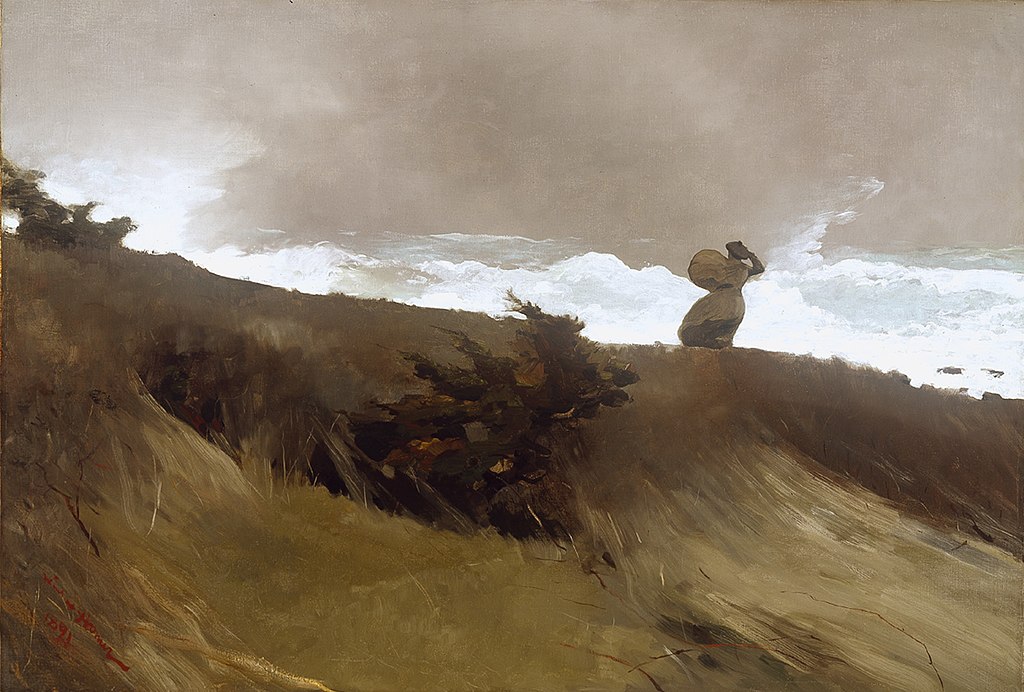 Look at the fog at the horizon of the painting.  I can almost feel the wind through the grass and the penetrating fog. Homer’s brushwork feels full of motion….there is light on the horizon but it looks like the storm is coming. Another solitary figure strolling away from us.

Everything is blowing in the Homer—clouds, water, cloak, trees, grass.  It’s an exhilarating picture and makes me feel chilled to the bone! 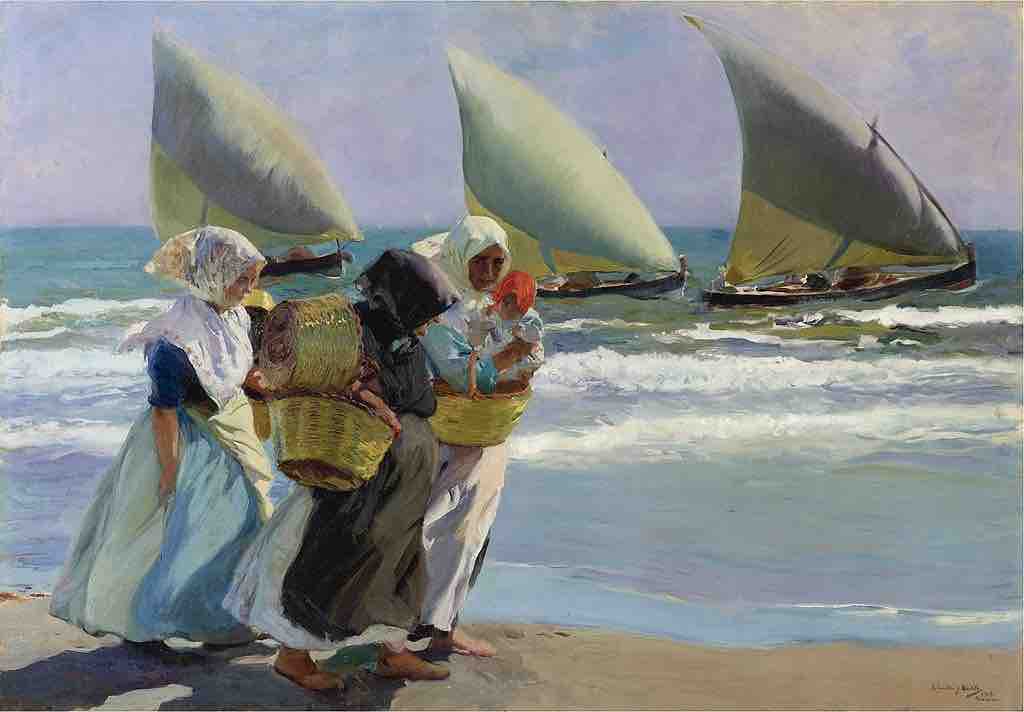 As the women bend to walk into the wind, three sails are full and push the boats along.  But the women and the baby are overshadowed by the three sails.

The wind also plays a major role in the Sorolla painting with the full sails of the three boats and the women struggling to make their way along the coast.

The heart of man is very much like the sea, it has its storms, it has its tides and in its depths it has its pearls too. 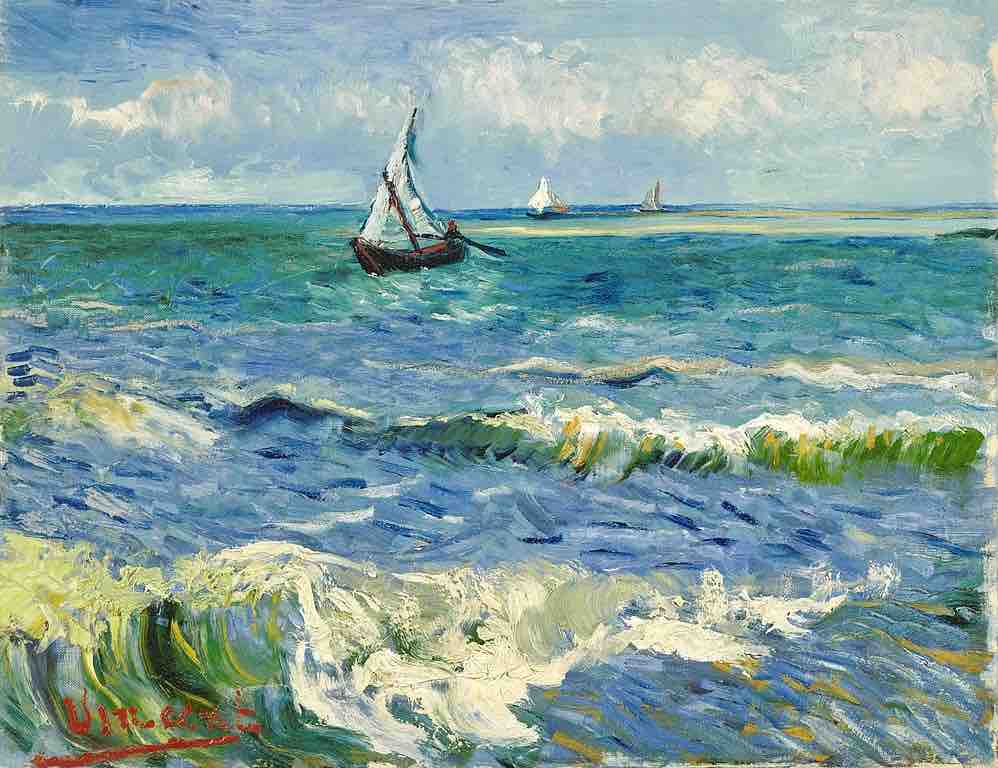 Van Gogh paints waves rolling in and out with the sun on them reflected by the water.  There are three sailboats disappearing on the tide.  Where are those isolated vessels going?

The sea is calm tonight.

The tide is full, the moon lies fair 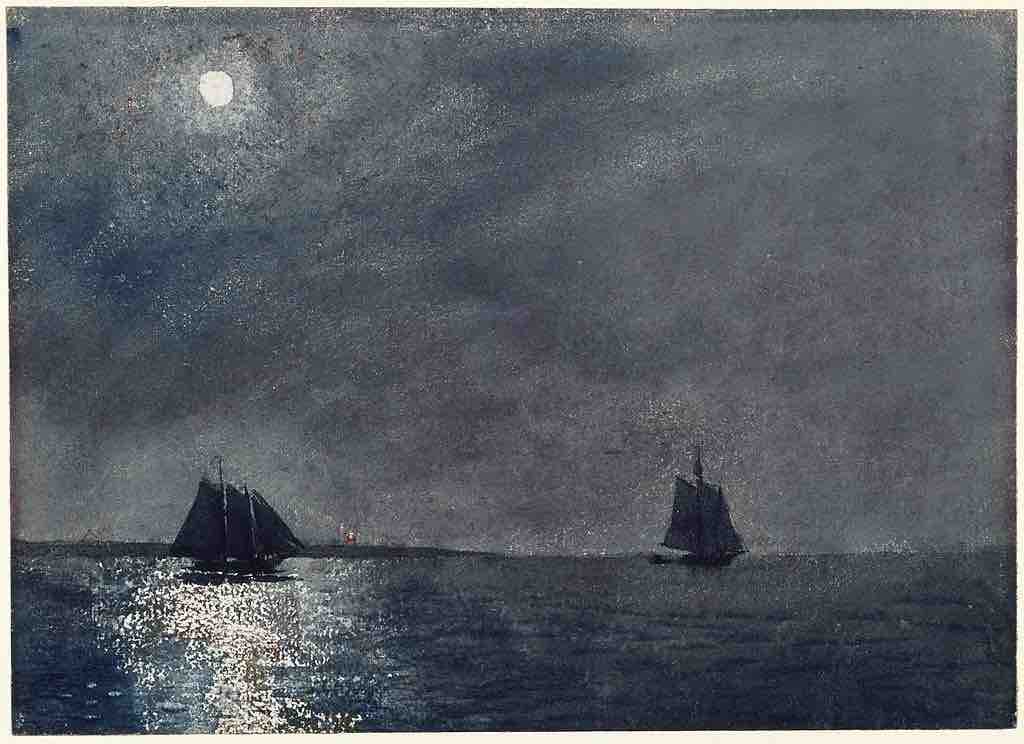 This one is my absolute favorite of these seascapes.  The watercolor of Homer is alluring.  Moonlight reflected in the water.  The light (house) is very distant.  This is a moody painting.

The Homer watercolor is the antithesis of the two oils.  The scene is so still and beautiful!

The voice of the sea speaks to the soul, the touch of the sea is sensuous, enfolding the body in its soft, close embrace. 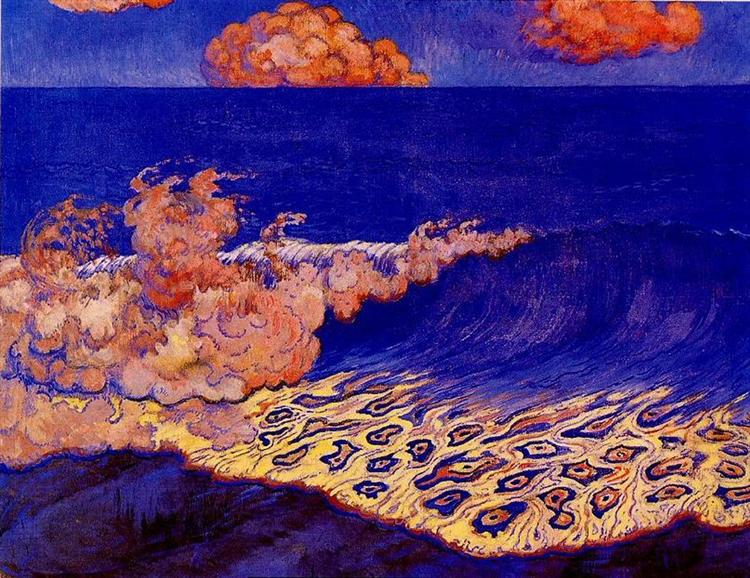 Georges Lacombe really does color! Startling and vivid color! There are waves breaking over the sand and then those red clouds. The viewer feels motion through all the color.  Love that the horizon line is “over the top.”

I love the Georges Lacombe seascape.  The waves in the foreground remind me of an Art Nouveau’s peacock’s feathers.  His use of color is so impressive.

We are tied to the ocean.  And when we go back to the sea, whether it is to sail or to watch, we are going back from where we came. 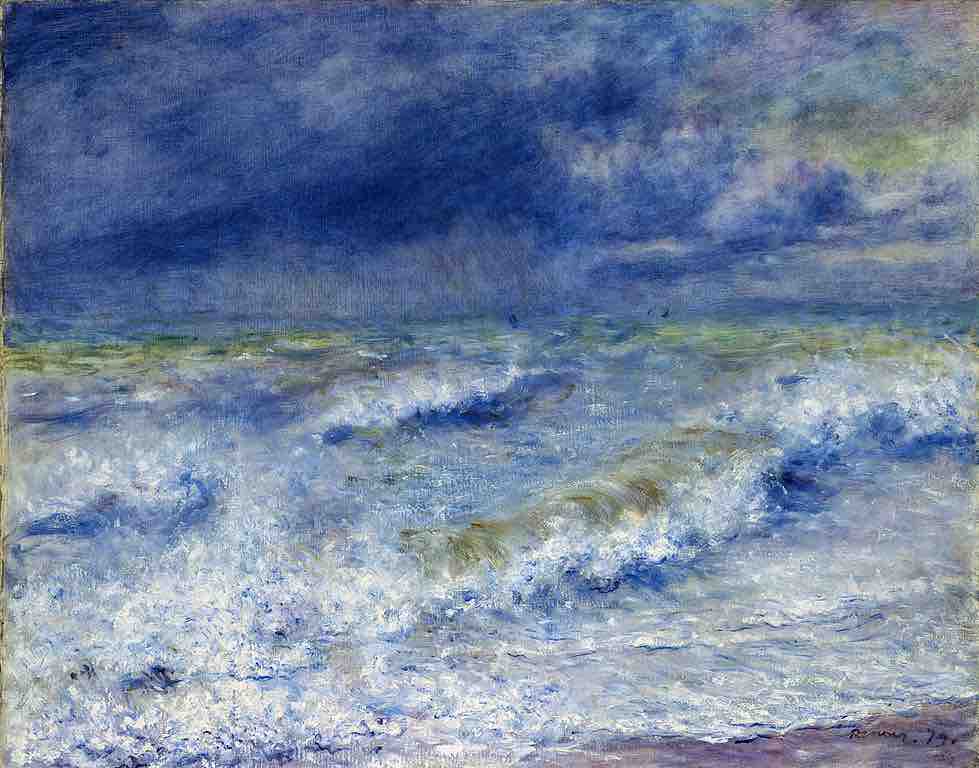 The play of light on the water…the master Renoir really showed light on those waves full of motion..light on the horizon but it looks like the storm maybe be coming.  The blues and yellows and…oh those clouds!

The sea, once it casts its spell, holds one in its net of wonder forever. 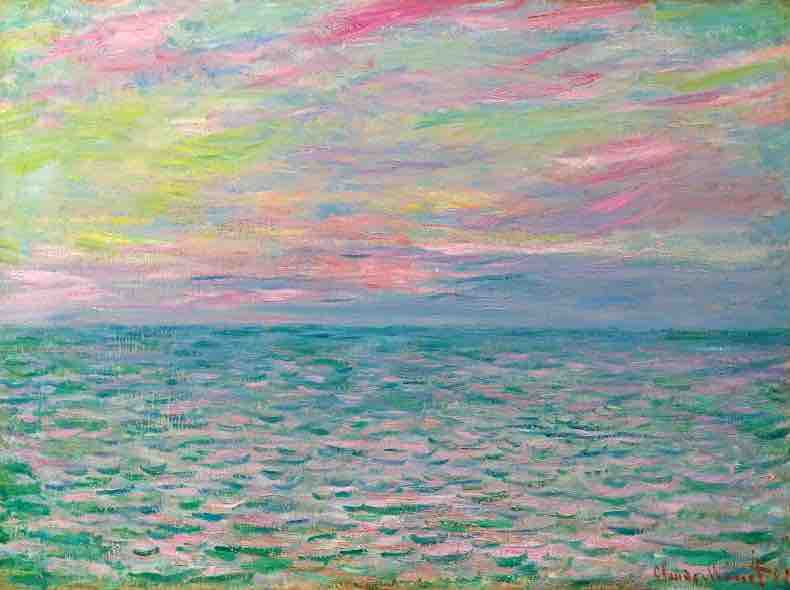 Monet paints us a feeling of the energy of the sea, although the sea is calm, but there’s the colors of the reflected sunset in these waters.  It is joyous!

Speaking of color, the palette of the Monet seascape reminds me of so many of his waterlilies.