By Joan Hart on December 8, 2014 in Art Happenings

PRELUDE TO THE LITTLE DANCER

THE LIVES OF BALLERINAS

Although French Impressionist Edgar Degas’ Little Dancer, 14 year old Marie van Goethem, was dismissed from the Paris Opera Ballet in 1882, she’s a prima ballerina in 2014.  The inspiration for a popular play as well as a current exhibition at the National Gallery of Art in Washington, D.C., she’ll also be the star of my Wednesday blog.

However, in today’s mini-show, Prelude to the Little Dancer: The Lives of Ballerinas, I’d like to introduce you to several of her companions or “rats”—the adolescent girls usually from impoverished backgrounds who were the foundation of France’s premiere dancing corps.  For according to Degas, I’ve gotten to know these little ballet pupils since they’ve been coming to pose for me, often depicting them and their everyday routines with sympathy as well as compassion for some four decades.

Is the dancing master’s class ready for tonight’s performance in Rehearsal in the Studio?  Will they be able to finally execute the choreography practiced for weeks under his exacting guidance?  He stands at the edge of the painting, almost out of view, counting each step and scrutinizing every gesture as his students advance toward him. The trio in front, conscientiously assuming their positions: heads forward, arms outstretched, concentrating on maintaining their balance as they keep time to the violinist’s music. While the group near the sunlit windows are still in various stages of preparation: stretching, yawning, or quietly waiting for a chance to impress their teacher.

Yet, what is the status of the dancer looming in the foreground, who seems to be inspecting her slipper? Has she completed her promenade across the room?  Or did she somehow stumble?

Click on the details after enlarging the image for a better view. 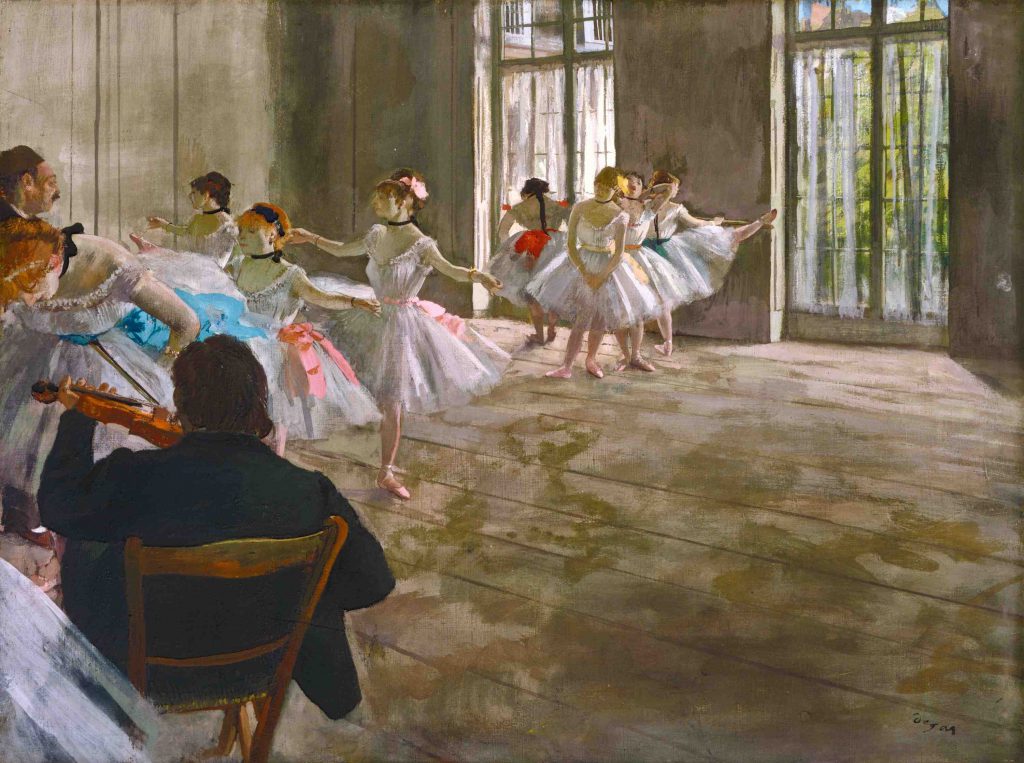 How many hours have they been Practicing at the Barre, enduring the dancers’ daily exertions, barely disguised by their elegant costumes. The pair’s taut, muscled legs bear the maximum stress, pressing downward or propped against the horizontal bar. Placed by Degas in the upper corner of the studio space, their struggle magnified by the strong diagonal thrust of the slanting floor. Though why has the artist inserted the mysterious watering can?* 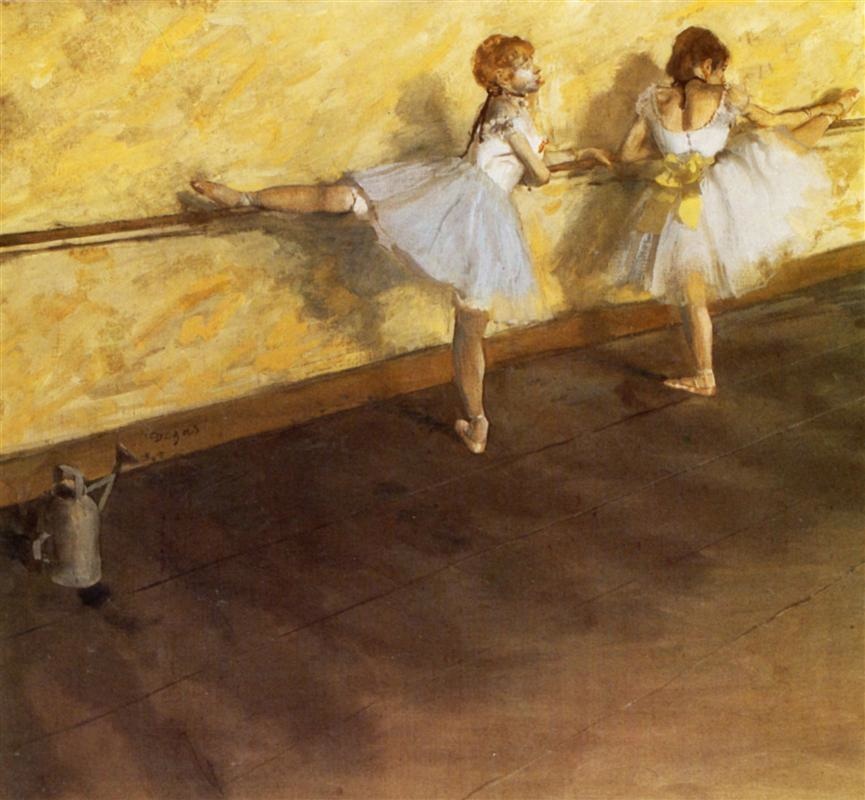 But the Dancers Resting have ultimately succumbed to the ballerinas’ ordeal—the regular regimen that prematurely ages their still developing bodies. Exhausted and overwhelmed they can no longer resist the force of gravity, pulled downward into a zone of despair. Whether attempting to revive a chronically aching ankle or to face the next grueling session. 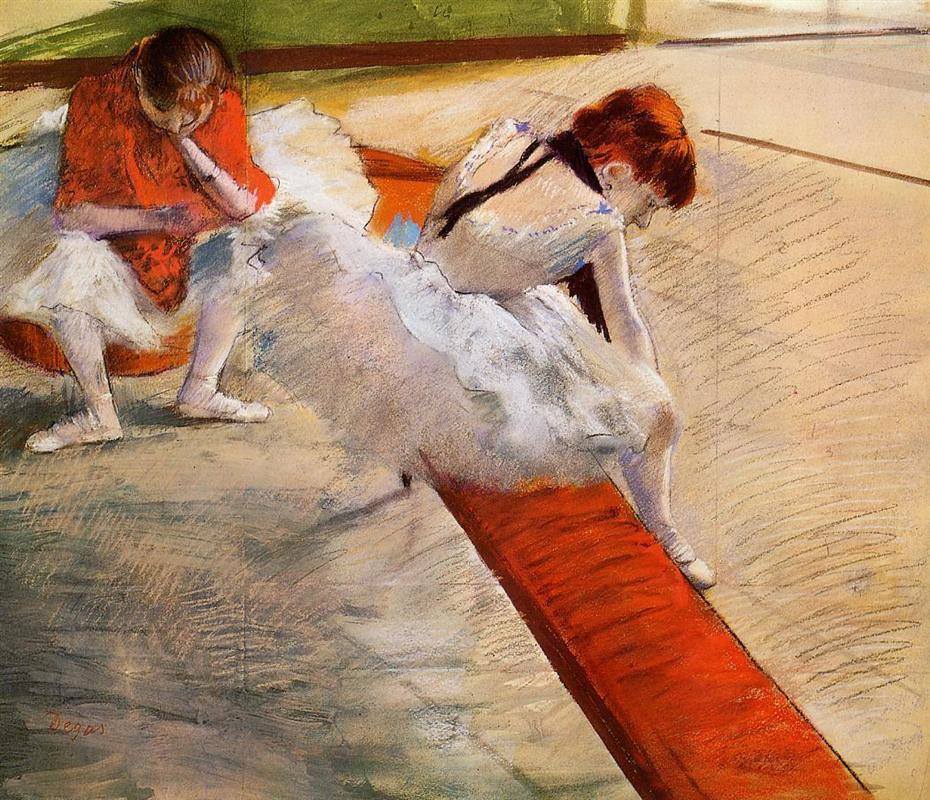 Yet, the Dancer with a Fan is a true professional, somehow overcoming constant pain. Massaging her neck as she unfolds her stage prop, already preparing for her upcoming role.

Is The Curtain rising or descending? Here Degas allows us access to backstage where illusion and reality overlap. The dancers themselves reduced to a line-up of unattached feet, causing a rather comical effect.  Except their so called gentlemen “protectors,” scattered among the painted scenery, probably do not notice. Focused instead on another type of entertainment with their “charges” after the theater production. 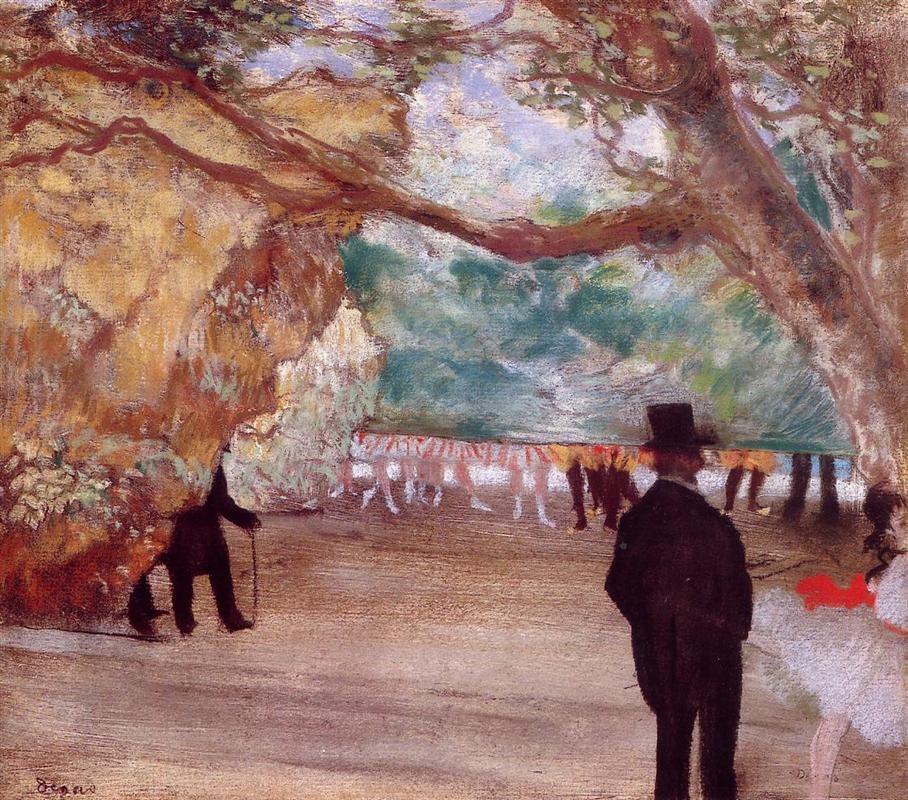 Edgar Degas, The Curtain, c. 1880, pastel over charcoal and monotype on laid paper mounted on board, National Gallery of Art, Washington, D.C.

Is it really opening night? A ballerina pauses in Dancer on Stage, listening to her cue, enveloped in an Impressionistic fantasy of Degas’ rainbow colored pastels.  Will her dedication and training lead to the ultimate success?

When she like The Star below, achieves the pinnacle of artistry. To fly, to soar in the air—forgetting momentarily all the years of hardship. 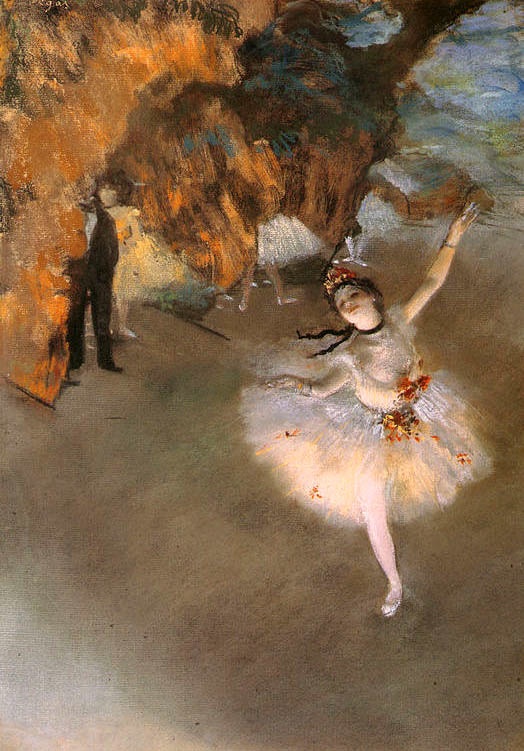 *Watering cans were used to wash dust off the dance floor.

The resources for this blog include The History of Impressionism by John Rewald, published by The Museum of Modern Art, New York, 1973; website of the Metropolitan Museum of Art, and biographies of Edgar Degas (1834-1917).

The above resources are used solely for educational purposes.

Expand your personal horizons with Through an Artist’s Eyes: Learning to Live Creatively!