Be certain to click on the work to ENLARGE or ENHANCE it.

Daumier is the Michelangelo of caricature.*

Although The Legislative Belly was created in 1834, Honore Daumier’s not so complimentary rendering of French lawmakers may still resonate with many 21st century viewers. For Daumier, whose 207th birthday was commemorated yesterday, February 26, is often considered the father of modern political satire in Western art.  His unforgettable caricatures can be found in art museums and galleries internationally, executed in a variety of media, from lithographs (as illustrated below) to paintings to sculptures.

Here are some biographical fast facts, reflecting Daumier’s belief in freedom of speech as expressed through his artistic creativity. 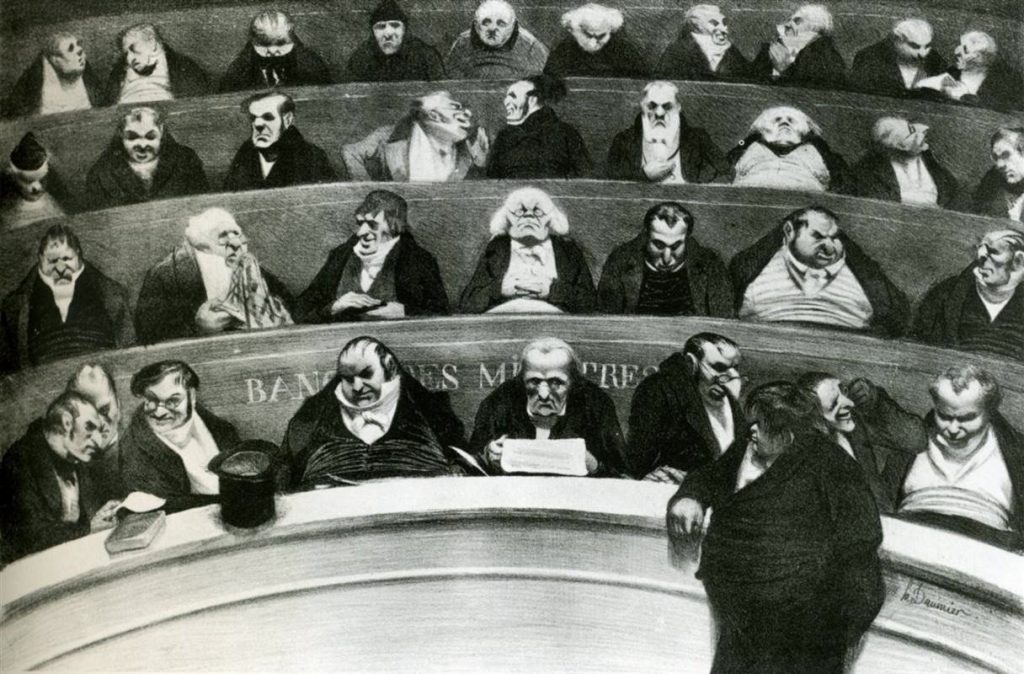 Born in Marseilles, France; father was glazier and aspiring poet.  Family moved to Paris when Daumier was 8, where the artist spent the rest of his life. Forced to work at 12, employed as messenger boy, later bookseller’s clerk.  By his early teens, he began studying art in spite of disapproval of his pere. Educated at Parisian art academies plus apprenticed with a lithographer.

Participated in July Revolution of 1830, possibly receiving a sword wound. Tried in 1832, for his cartoon Garganthua, mocking King Louis Phillippe; sentenced to 6 months in jail and fine of 500 francs.  Initially served time in Sainte-Pelagie prison, then moved to mental institution.

After his release, Daumier became regular contributor to Le Charivari and other anti-establishment magazines that opposed the monarchy plus  oppressive regimes in general.  Recognized for satirical series on Parisian society, including lawyers, doctors, fellow artists, and street performers.  Mainly earned living through lithographs and drawings of these themes, but also interpreted in oil as well as sculptures throughout his decades long career. However, Daumier’s portrayal of the lower classes sympathetic, especially of impoverished women and their children.

Experienced financial setbacks, having to sell his furnishings on at least two occasions.  Married with one child; by 1867, losing his eyesight. In 1870, in defiance of then government of Emperor Napoleon III, Daumier refuses the Legion d’honneur. One year before his death in 1879, he had his first and only one-man exhibition.

And within walking distance of he U.S. Capitol, the National Gallery of Art and the Hirshhorn Museum both have extensive collections of Daumier’s works, including his unique, often comic statues, of his contemporaries such as the members of the French Parliament.  So click on:

The sources for the blog above are Daumier by Sarah Symmons, Oresko Books Ltd., London, 1979 and the website of the Musee D’Orsay.