Click on the sculpture to enlarge or enhance it.

DEGAS AND THE TEENAGE DANCER

What do you think of Little Dancer, Aged Fourteen, nicknamed The Little Dancer? She spent decades hidden in Edgar Degas’s studio, after her brief debut at the 6th Impressionist exhibition in 1881, where her appearance was both praised and condemned. Compared by one critic to an opera rat who takes after a monkey, also writing  that if she were smaller, one would be tempted to enclose her in a glass jar of alcohol.* While another reviewer described her as perfect and of extraordinary construction and reality, adding that the artist’s work was a true masterpiece.**

Yet, her ugliness was commonly acknowledged, whether positively:

The child is ugly, but exquisite delicacies of her chin, her eyelids, and her ankles hold promise for the future.***

If he wants to show us a statuette of a dancer, he chooses her from among the most odiously ugly; he makes the standard of horror and bestiality.****

The average reaction today is likely to be less dramatic or intense. For The Little Dancer is generally accepted and admired, from the original statue at the National Gallery of Art in Washington, D.C. below, to the some thirty bronze and two plaster casts in collections of major art museums throughout the world.

Want to learn more about the Little Dancer’s history? Her construction is especially fascinating.

(See: Monday’s blog for part I of Degas and the Dance.) 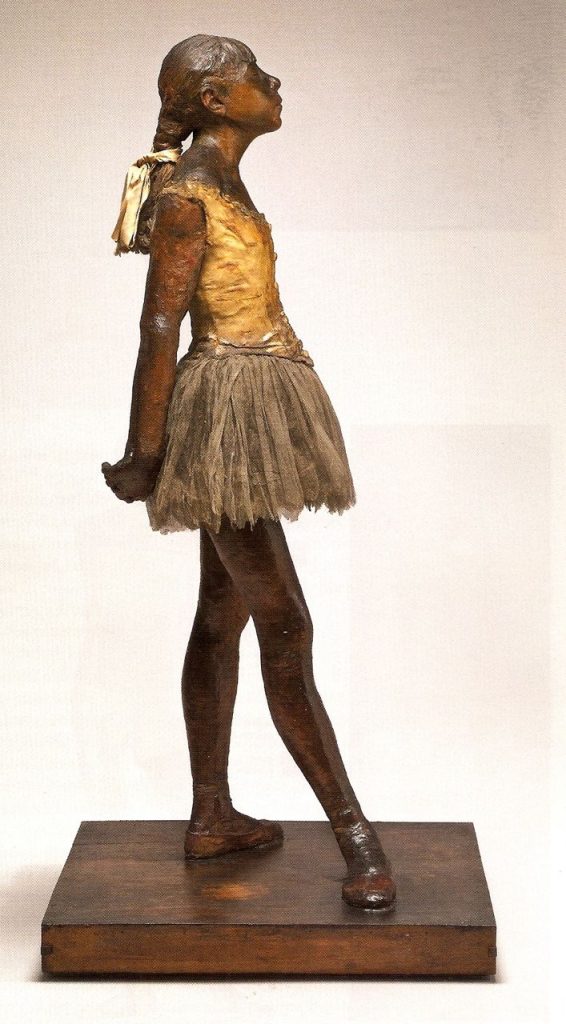 Vanished Without a Trace: Member of Paris Opera Ballet, identified as Marie from inscription on what is considered one of preparatory drawings–last name van Goethem; probably about 13 or 14 when artist began work of art in 1878 or 1879; parents of Belgian birth, father a tailor; sisters also belonged to troupe–eldest Antoinette left, later arrested for theft while youngest Charlotte succeeded as both performer and teacher; Marie dismissed in 1882, fate unknown. Did she become a prostitute?

Beeswax, Etc. Degas used mixed media; exterior made of pigmented beeswax over clay, thickest at shoulders; interior structure of metal armature of rods as well as wires for foundation of figure–wrapped and reinforced with wood, rope, even paint brushes (for arms); variety of color for enhancing flesh tones or the lips. Possibly needed assistance because of unusual materials, working from inside to outside during construction.

The Fourth Position: Posed basically in fourth position in ballet; arms behind back, hands clasped; head up, chin out, mouth barely open; pupils difficult to view, but can see at certain height.

Missed the Deadline: Extensive preparation, including some 26 preliminary drawings; meant to contribute to 1880 Impressionist exhibition (in which empty glass case intended for dancer evident), delayed until 1881 show.

A Repair or Two: In Degas’ studio until his death in 1917; prominent crack in upper left arm (according to old photographs), not certain when fixed; arms might have been detached and suffered other damage.

The One and Only Original: Inherited by Degas’ brother as well as nephews and nieces; contracted with Hebrard foundry to cast number of bronzes presently in art museums and other collections; disappeared from public sight after 1931; resurfaced in 1955, acquired by Paul Mellon in 1956, along with other Degas sculptures; bequest to National Gallery of Art in 1999.