EXHIBITION OF THE WEEK: MAKING COLOUR

BLUE IS A HEAVENLY COLOR

Are you addicted to colors like I am?  The British National Gallery of Art’s new MAKING COLOUR exhibition (6/18 – 9/7/2014) offers an opportunity to enjoy your favorites as well as providing the history of  their origins. Each room of the show is  organized around a single color. For instance, are you a fan of purple?  Click on the website below and view highlights of the paintings in that section, plus a video on how to create purple.  Try red, green, and gold too.

I chose BLUE, though, for our virtual mini-tour, combining works from MAKING COLOUR with a selection including Vermeer and Monet.

The Virgin in Prayer by Italian Giovanni Battista Salvi da Sassoferrato (1609-1685) is clothed in radiant ultramarine, derived from the semi-precious stone lapis lazuli which was imported from Afghanistan. Because of the then remoteness of its source, this priceless shade of blue was once more valuable than gold.  For centuries, its use was rare, and only the most skilled  painters would be given the privilege to work with it.  Sassoferrato’s artistry must have been highly regarded because he produced three more canvases similar to the one below which currently belongs to the National Gallery in London. 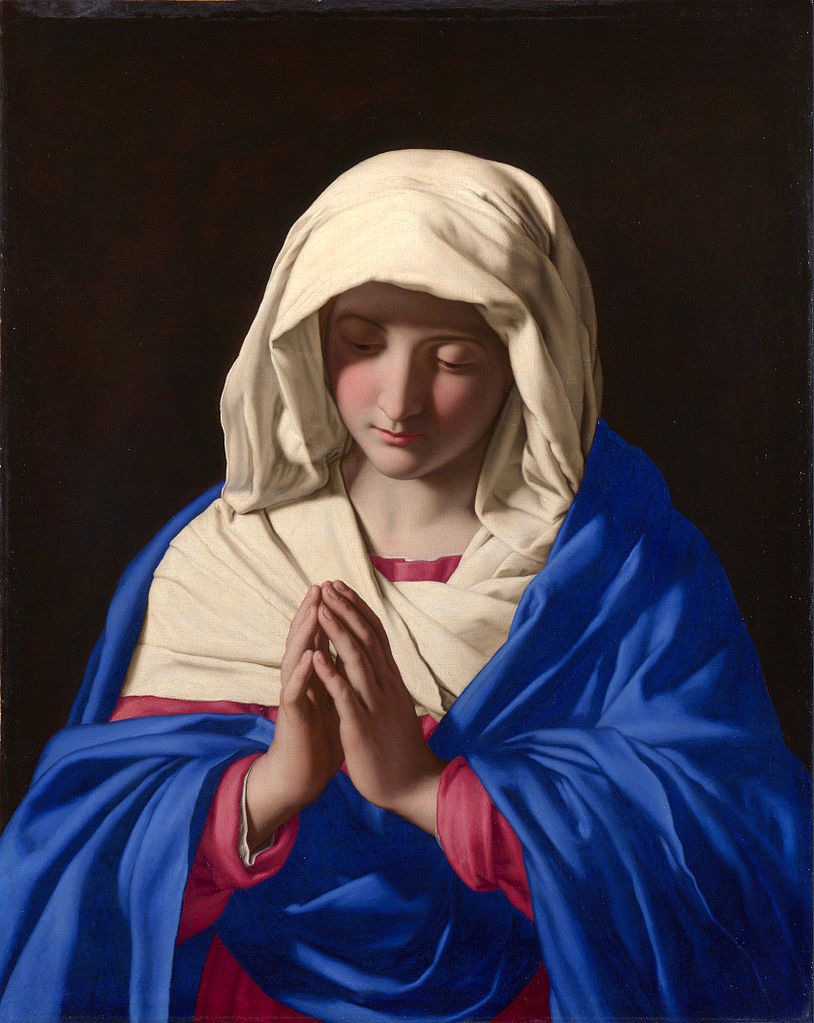 Around the same time in the newly independent Netherlands, Johaness Vermeer (1632-1675)  was also applying the expensive pigment to a much different subject in The Milkmaid.  She’s a working woman, dressed in a humble outfit of coarse fabric, apparent especially in her yellow  bodice.  Yet, Vermeer has defined her apron with a transparent layer or glaze of rich ultramarine, producing three dimensional folds that sculpt her body.

But how did Vermeer afford such a costly paint? Did a wealthy patron pay for it?  Or was the artist so obsessed with perfection that he was willing to risk the expenditure, convincing himself that The Milkmaid would undoubtedly sell. 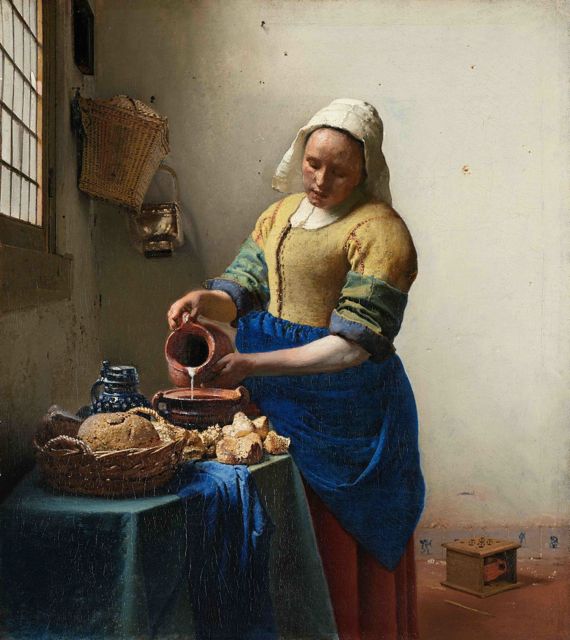 Thomas Gainsborough (1727-1788) probably didn’t have to worry about the price tag, when he started painting with Prussian blue, one of the first synthetic pigments, invented about two decades preceding his birth. The Blue Boy is a result, a virtuoso performance, made possible by the innovations of science.

Jonathan Buttall, the son of  a prosperous merchant,  could be the model, although his identity has not been confirmed.  However, whoever  the youth might be, he is wearing a costume fashionable some hundred years before, probably Gainsborough’s tribute to 17th century portraitist, Anthony van Dyck.

Although Prussian blue continued to be the mainstay of numerous artists (Van Gogh used it in his iconic Starry Night), the invention of additional synthetic pigments in the 1800s, revolutionized the accessibility and range of colors in general particularly blue.  For example,  the short, thick brushstrokes of the sparkling water in Renoir’s The Skiff are cobalt blue, which his Impressionist colleague Monet utilized too in his vibrant landscapes of the French countryside. 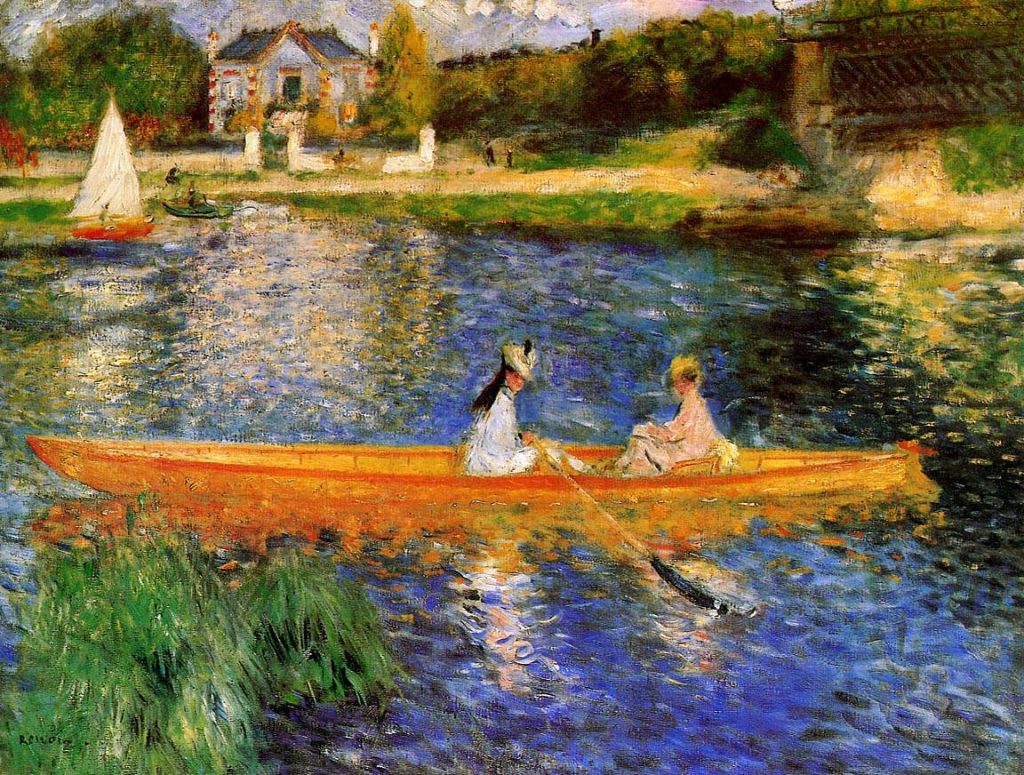 Monet also employed the lighter cerulean blue as well as a sythetic ultimarine.  In a work like La Gare Saint-Lazare below,  all three types of blue can likely be found.  Miraculously, Monet has transformed the smoky, grimy atmosphere of a Parisian railroad station into a dream-like setting.

In addition to cheaper materials, Monet and his peers had the advantage of another technological advancement—the paint tube which was easily transportable and required no mixing of pigments, freeing them from the confines of the studio.

Finally, Edouard Manet, never officially a member of the Impressionists, was certainly influenced by their palette and technique, evident in his scintillating Blue Venice, celebrating the beauty of this powerful color. 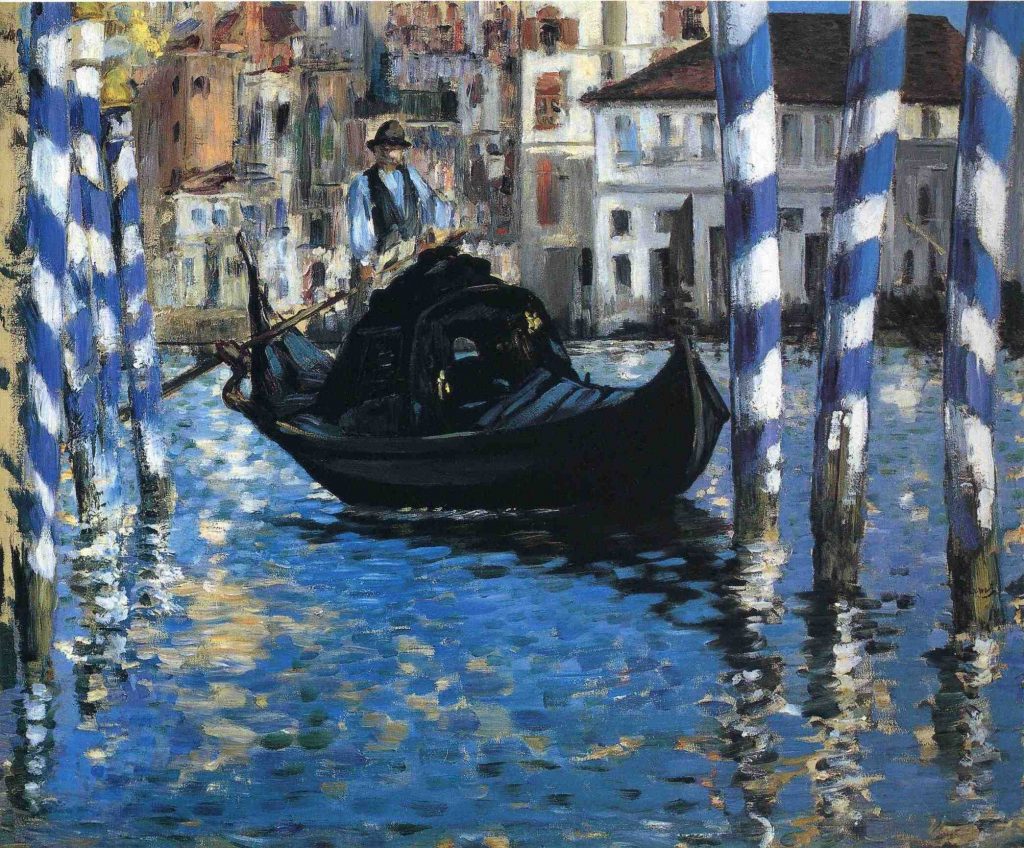 THE MIRACLE OF COLOR

THE COLORS OF VAN GOGH

Explore the miracle of art and living in Through an Artist’s Eyes: Learning to Live Creatively!

PLEASE SCROLL DOWN FOR THE PREVIOUS BLOG.